Need Electrophoresis Equipment for your research?

It can provide a molecular sieving effect on electrophoretic separation of the sample, based on the size of the pores between the molecules of the support matrix. It can also reduce convection currents that are generated from excessive heat, which occurs during electrophoresis. When the separation is completed, components of the sample are isolated into distinct bands or zones. Each band represents constituents in the samples that possess similar or identical characteristics (Jorgenson, 1986; Walker, 2010). 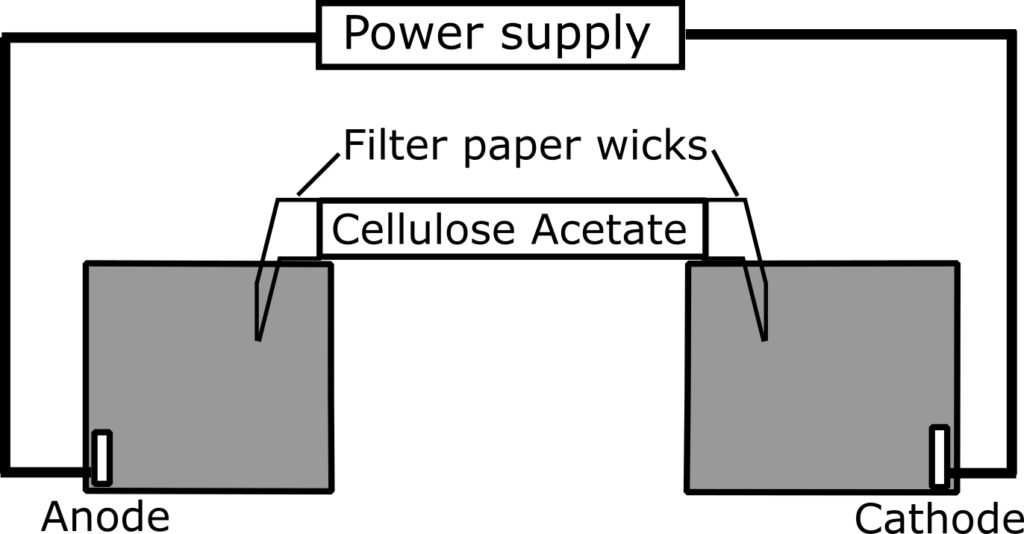 Figure 1: Schematic representation of the set-up of cellulose acetate electrophoresis

In the case of cellulose acetate electrophoresis, membranes in the form of sheets or stripes made from cellulose acetate are saturated with the running buffer. Each end of the buffer-saturated stripes overlaps with a filter paper wick that reaches into the buffer in an electrophoresis tank (Figure 1). Samples of interest are dotted onto the surface at about half or one-third of the length of the cellulose acetate membrane (Kohn, 1969; Walker, 2010). The separation begins when an electric current is applied to each end of the stripe, which acts as an anode and cathode. At the end of the electrophoresis, separated components can be stained and unstained for visualization purposes and for further quantitative analyses (Kohn, 1962).

Cellulose acetate electrophoresis is suitable for rapid screening purposes by comparing the pattern of separation obtained from the sample of interest with that of a known reference. The technique is applicable to various types of samples, such as nucleic acids, proteins, polypeptides dyes, and mixtures of dyes and polysaccharides (Kohn, 1962; Dudman & Bishop, 1968).

Cellulose acetate is derived from the acetylation of filter papers, which are made of pure cellulose. The acetylation is generally in the C-3 and C-6 positions of the glucose ring (Rochetti & Gelfi, 2001). Cellulose acetate possesses larger pores than other popular electrophoretic matrices such as agarose and polyacrylamide (Walker, 2010). The sieving influence that cellulose acetate imposes onto the separating components, therefore, is very little or no. In fact, it can be inferred that the mobility of the components in the sample during cellulose acetate electrophoresis is largely based on the overall charge rather than the size of the component in question (Kohn, 1957; Westermeier, et al., 2005).

Cellulose acetate electrophoresis was first introduced when Kohn demonstrated its ability to separate hemoglobin, a protein in the red blood cell, and to identify abnormal hemoglobin in blood serum (Kohn, 1957 as cited in Rocco, 2005). The technique was very well-received among clinical biochemists because cellulose acetate provides several advantages over filter paper. The following highlight some of the advantages of the technique:

2. Separation on cellulose acetate results in a sharp zone of separation

3. Cellulose acetate can be made transparent for downstream analysis

One major drawback of filter electrophoresis is that it is not possible to quantify the resulting separated components. Only the estimation of the relative amount or concentration of the separated components is possible. Cellulose acetate, however, can be cleared after electrophoretic separation and staining, if necessary. This is achieved either by making cellulose acetate transparent or by dissolving it with compatible solvents. For example, cellulose strips with separated protein fractions can be stained with Acid Black 2 (nigrosin) or Ponceau S and made transparent with microscopic immersion oil, acetic-ethanol mixture, or trichloroacetic acid solution. Once the background is completely transparent, the cleared stripe can be scanned on an optical densitometer for quantification. Alternatively, each band can be cut from the membrane, dissolved in a mixture of ethanol and chloroform, and the protein-dye complex, which reflects the amount of each protein fraction, can be measured using a spectrophotometer (Rocco, 2005).

Unlike other newer matrices, cellulose acetate is a ready-made matrix which, apart from equilibration in the running buffer, does not require further modification or preparation before use. This is particularly useful in high-throughput analysis, in which one or two types of samples are repeatedly analyzed in large quantities. A ready-made matrix reduces the probability that unforeseen variations are unintentionally introduced in the set-up of the electrophoresis (Walker, 2010) and also provides the versatility to the technique. Cellulose acetate electrophoresis can be applied to a wide range of samples, provided that a suitable running buffer is available. For example, a more comprehensible separation pattern of hemoglobins can be achieved by changing a running buffer to two running buffers, one at each electrode, creating a discontinuous buffer system (Kohn, 1969). The use of a ready-made matrix also allows the integration of robotics for the analysis, making it possible to convert cellulose acetate electrophoresis to a fully automatic system (Rochetti & Gelfi, 2001).

Serum analysis, particularly the separation of normal and abnormal hemoglobins in the blood serum, was the first application of cellulose acetate electrophoresis in clinical pathology. Hemoglobins are iron-containing proteins that carry oxygen in the red blood cells. Mutations in genes encoding any of the hemoglobin subunits will result in the alteration in some characteristics of the goblin, leading to hereditary blood disorders such as sickle cell anemia, alpha- and beta-thalassemia (Forgot & Bunn, 2013).

The transfer immunoelectrophoresis method is an adaptation of immunoelectrophoresis (IEP) performed using an agar block as developed by Grabar and Williams in 1955 (Rocco, 2005). In IEP, serum containing antigens, which are proteins or peptides that specifically react to antibodies, are separated by gel electrophoresis. After separation, anti-serum-containing antibodies are diffused to allow the binding of antigen to its corresponding antibody, which will lead to the precipitation of antigen-antibody complex (Nowotny, 1979).

Counterimmunoelectrophoresis (CIE), is an electrophoresis technique that tests for a compatible antigen-antibody interaction. In CIE, a serum is applied on one side of the medium and the sample on the other. After the application of an electric field, the serum and samples migrate to the middle and, if antibodies are present in the serum, a band representing an antigen-antibody complex, or precipitin, will be formed. Kohn demonstrated the application of cellulose acetate electrophoresis for the CIE. Similar to the transfer IEP method, the formation of an antigen-antibody complex in CIE can be stained, cleared, dried and directly kept as a record of the analysis (Rocco, 2005).