The 9-Hole Peg Test is considered a vital test to measure dexterity. It is one of the Qolty Mobile Assessments that utilizes the Apple ResearchKit™ framework to define a large number of predefined tasks, including motor activities, fitness, cognition, voice, audio, and hand dexterity. We utilize these functions for your use in your study, making it easy to capture objectively reported data from your patients.

Dexterity is the coordination of small muscles involving the synchronized movement of hands and fingers with the eyes. These skills continuously develop throughout phases of human development and assist in the growth of intelligence. In Multiple Sclerosis, Parkinson’s disease or stroke these skills are heavily diminished. In combination with gross motor skills, dexterity is important for carrying out everyday activities, and deficits can significantly impact the quality of life. Other reasons for impairment can arise from congenital deformities, developmental disabilities, and injuries.

The 9-Hole Peg Test is considered a vital test to measure dexterity. It was introduced by Kellor et al.1971, and a more detailed test instruction was provided by Mathiowetz et al., 1971. Since then, the test has been used in the assessment of hand and finger dexterity, in different diseases and impairments arising from injuries, with further refinements.

Conventionally, the 9-Hole Peg Test task is performed using a nine-hole pegboard placed in front of the subject, with the peg holder positioned at the side of the hand that is being tested. The task requires the subject to place all the pegs one by one, using only one hand, into the holes as fast as possible. On completion of the task, the subject is required to remove the pegs, one by one, using the same hand, as fast as possible. The task is then repeated with the other hand.

The time to complete and the ability of the subject to place the pegs is observed during this task. Subjects with dexterity deficits tend to take longer times and struggle with coordination. The activity is performed with other assessments to gain a better perspective of an individual’s dexterity.

Hand Dexterity is one of the categories of Apple’s ResearchKit’s Active Tasks which uses an MSFC score in the assessment of hand dexterity. The mobile device activity is presented through a user-friendly interface and uses the multi-touch display to test hand dexterity, by measuring the peg distance moved and the completion time for the task, in a two-step process.

Finger motor function was evaluated in Chinese CMT patients by Niu et al., 2017. The task was performed twice for both dominant and nondominant hands and the average time of each hand was calculated. Mean scores of completion for CMT patients were significantly slower in comparison to the healthy controls for the dominant hand. The 9-Hole Peg Test also revealed that women CMT patients were faster than their male counterparts in the task performed with their dominant hand.

The 9-Hole Peg Test is the most frequently used assessment for hand dexterity in MS. The scores are often compared with a control group or with clinician-provided data (Hervault et al., 2017, Feys et al., 2017). The 9-Hole Peg Test provides a good comparison between normal hand function and individuals with minimal hand dysfunction, at a significant level.

Immerman et al., 2012 evaluated hand functions of 25 children diagnosed with the upper (C5/C6) brachial plexus birth injury, of which 22 had undergone primary nerve reconstruction, and 13 had undergone simultaneous shoulder and other secondary procedures. The 9-Hole Peg Test showed that the children took 18.8% longer time than the expected 7.2% to complete the task with the involved hand. This revealed that although shoulder function in these patients may be rated good or excellent, attention must be paid to the subtle limitations of hand function.

Poole et al., 2005 measured the dexterity of 416 children aged 4 to 19 years using the 9HPT, the results of which showed that dexterity improved with age as revealed by the completion time for the task. The scores also revealed that for all age groups, females performed better than males. In addition, the dominant hand performance was better than the non-dominant hand performance for all groups.

The data collected from the 9-Hole Peg Test is the duration to complete the task for each hand and distance moved in the case of the mobile application. Subjects are also observed for their coordination ability during the test. The task is usually performed twice for each hand, and the results are averaged for the two attempts. The following graph is an example of the possible measure that can be obtained from the 9HPT. 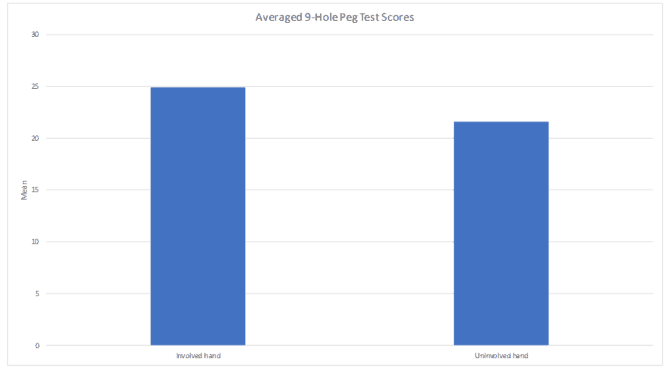 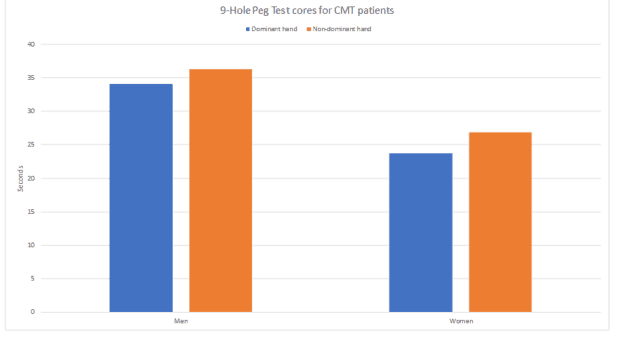 Another sample data that compares the performance of male and female CMT patients in the 9-Hole Peg Test (Niu et al., 2017)

The 9-Hole Peg Test is an excellent paradigm to test dexterity in patients with various diseases, deformities, and impairments. The task can easily determine subtle hand function deficits that may be the early signs of many diseases. The task measures the dexterity of both hands and requires no familiarization process as it is a straightforward task. Further, the test has a good correlation with the upper limb Japanese Orthopaedic Association grading, making it a good index for the evaluation of upper limb functions (John et al., 2017). By adapting the task for a mobile device, the assessment can be performed by the patients in the comfort of their own space.

Although a good measure of subtle hand functions, the 9-Hole Peg Test cannot be used for patients with severe upper extremity impairment or severe cognitive impairment. Combining scores for both hands is not recommended as it leads to erroneous results. Using the 9-Hole Peg Test in combination with other tests would allow for the better measure of dexterity.