FACT-BMT form can be integrated into the CS Digital Health app and sent over longitudinal time periods at your discretion and implemented with objective modules to give you unprecedented insight into your patients.

FACT-BMT form was designed to measure the QoL in patients undergoing bone marrow transplantation. It combines the FACT-G, an assessment of physical well-being, social/family well-being, emotional well-being and functional well-being, with Bone Marrow Transplantation Sub-scale(BMTS) to measure the QOL of BMT patients. It can be integrated into the Qolty app and sent over longitudinal time periods at your discretion, and implemented with objective modules to give you unprecedented insight into your patients.

Bone marrow transplantation (BMT) is usually a recommended procedure for patients with cancers (such as Leukemia, Lymphoma, Myelodysplasia, and Multiple Myeloma) and diseases that affect bone marrow cell production (such as Thalassemia). The procedure heavily impacts the quality of life (QOL) of an individual. However, BMT may be the only hope for a cure or a longer life for some individuals.

The FACT-BMT was designed to measure the QoL in patients undergoing bone marrow transplantation. It combines the FACT-G, a widely used assessment primarily assessing physical well-being, social/family well-being, emotional well-being, and functional well-being, with Bone Marrow Transplantation Sub-scale(BMTS) to measure BMT specific concerns (McQuellon et al., 1997). Physicians/Oncology nurses with at least 3 years of experience in treating a minimum of 100 BMT patients and patients who had undergone BMT were interviewed in the process of developing BMTS. The interview resulted in the production of 37 candidate questions, of which 12 were selected to represent BMTS in comparison with the FACT-G and to avoid redundancy in combination with the FACT-G questionnaire (McQuellon et al., 1997). Factoring in the newness of the BMT procedures and the significant side effects of the BMT preparative regimens, QoL data of this population is crucial for assessment and rehabilitation processes.

The FACT-BMT incorporates 12 elements of BMTS and uses a Likert-type scaling ranging from 0 to 4 (where 0 = not at all; 1 = a little bit; 2 = somewhat, 3 = quite; and 4 = very much). The questionnaire is used as a self-assessment and requires the patient to fill it concerning the past 7 days. The FACT-BMT consists of the following categories of assessment:

Physical well-being: The patient is asked to rate their physical health regarding sickness, energy, and ability to perform daily activities.

Social/family well-being: The patient is asked to rate their social and family environment in relation to emotional support and closure, and other aspects of family and social life.

Emotional well-being: The patient is asked to rate their emotional health regarding mood, anxiousness, and coping skills.

Functional well-being: The patient is asked to rate their functionality in relation to elements of routine and the level of satisfaction with life.

Additional concerns: This category includes other miscellaneous concerns the patient may have concerning their healthcare, persons involved in their life, and other emotions and incapabilities.
The patients are provided with the assessment at three points, once after the BMT (baseline), after hospital discharge, and after 100 days. The frequency of the assessment can be increased as required.

Martino et al., 2017 assessed the QoL in patients with multiple myeloma who had undergone autologous stem cell transplantation (ASCT). Based on the patient’s preference for inpatient or outpatient care model, QoL was assessed using FACT-BMT at three points; 7 days before ASCT (Baseline), 7+ days after ASCT and 30+ days after ASCT. Using the FACT-BMT, QoL differences between inpatients and outpatients were compared. Inpatients showed a higher mean score compared to outpatients in physical well-being. However, outpatients showed a higher mean score for social/family well-being in comparison to inpatients.

Hospitalization during hematopoietic stem cell transplantation (HCT) is known to have a deteriorating impact on the QoL of the patients. El-Jawahri’s et al.,2016 study aimed to correlate QoL with the probability of  PTSD in patients hospitalized for HCT. Based on the FACT-BMT assessment, which was carried out pre-transplant (Baseline) and 6 months after the transplant, a decline in QoL was found to be significantly associated with PTSD symptoms in patients after 6 months since HCT. The assessment further highlighted the impact of marital status as a notable predictor of PTSD, as married patients showed fewer symptoms of PTSD after HCT.

La Nasa’s et al.,  2013 study aimed to investigate the QoL in β-thalassemia major patients who had undergone HSCT. The FACT-BMT assessment was done 20 years after the transplant with the aim to view the difference in health-related QoL of these ex-patients with the general population. The assessment revealed that patients with the confirmed association of GVHD and those with comorbidities or living alone had lower scores of FACT-BMT.

The following graphs depict sample subscale data of physical well-being and emotional well-being of the FACT-BMT for adolescents (13 to 20 years of age) who underwent the Bone Marrow Transplant Dóro et al., 2003. 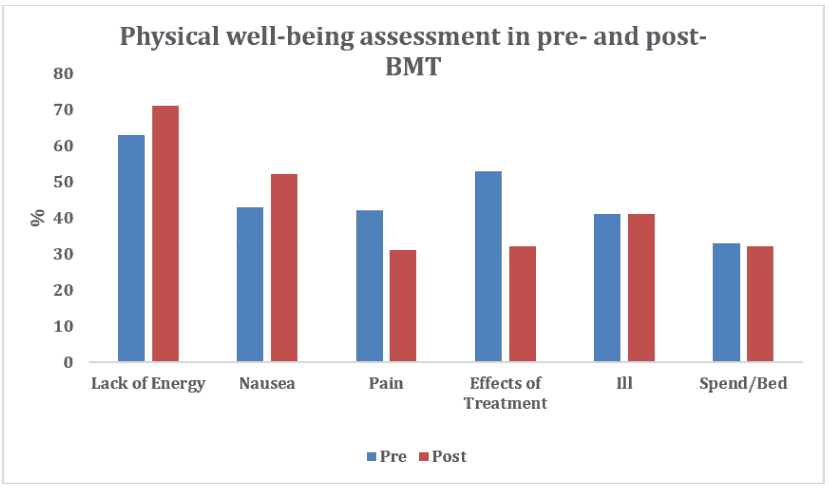 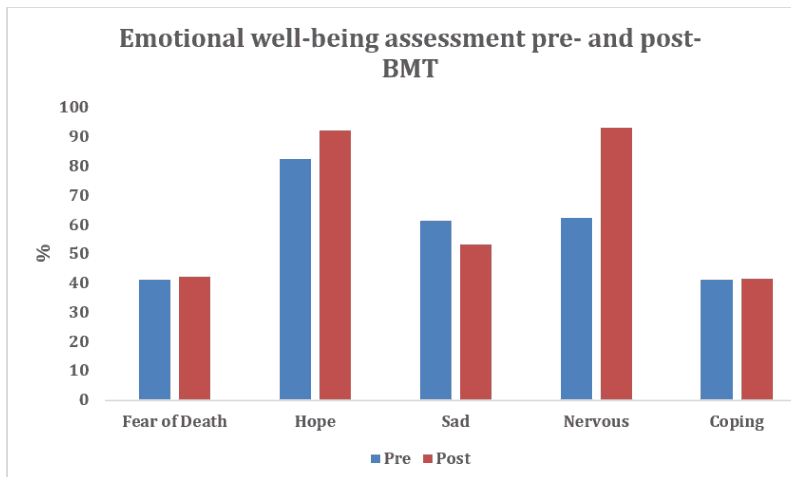