The Finger Tapping Test, or the Tapping Speed assessment is one of the many tools available to assess motor control and the integrity of the neuromuscular system. The Finger Tapping task involves evaluating the tapping speed of the fingers and the time between each tap. The task can be administered with variations depending on the need of the investigation.

The ConductScience Digital Health Mobile Assessments utilizes the Apple ResearchKit™ framework to define a large number of predefined tasks in six broad categories: motor activities, fitness, cognition, voice, audio, and hand dexterity. We utilize these functions for your use in your study, making it easy to capture objectively reported data from your patients.

Motor control refers to the activation and coordination of muscles and limbs to perform motor activities. Motor activities are an important part of our everyday life, and motor dysfunction can significantly impact the quality of life. Motor deficits can arise in individuals as a result of neurodegenerative diseases, injuries or other disorders and diseases.

For recording the number of tapping and inter-tap interval, devices such as the mechanical counter, computer keyboards, and sensors, are generally employed. The participant is asked to place their palms flat on the surface with their finger stretched out and placed over the sensor or the button. Usually, the task is carried out in 10-20 seconds trials. With the aid of Apple’s ResearchKit, this task can only be administered with the subject’s iPhone.

The constituents of basic motor capabilities (speed, accuracy, and rhythm) can be assessed by the Tapping Speed Active task of Apple’s ResearchKit Framework. The user is presented with two targets on the touchscreen and is required to tap the targets, alternating between the two rapidly. This activity uses the multi-touch display, and the accelerometer sensor of the iPhone to collect data via touch activity.

Munro et al., 2012 evaluated the effect of antidepressants on the cognitive performance of depressed Alzheimer’s patients. Patients were tested for index finger tapping speed for 10-second intervals in 5 trials for the dominant and the non-dominant hands. The assessments were conducted in 8 week interval periods for 24 weeks. No significant observations were made over the course of assessment in either the sertraline-treated patients or placebo-treated patients. The researchers suggested this was because the patients did not suffer from Major Depression, which would have impacted their cognitive abilities.

Gao et al., 2015 evaluated fine motor function in male teenagers with mild spastic diplegia. The Tapping Test involved using the index fingers to press the keys persistently for a 30 second period. The first task involved tapping the right keyboard key with the right-hand finger followed by pressing the left key with the left-hand finger. Next, the participants were asked to tap the left and right keys alternatingly with the right-hand finger, then with the left-hand finger. Under all four conditions of testing, the patients had a larger Tap Rate in comparison to the controls.

The Finger Tapping task measures the fine motor skills of an individual. Data is collected for tapping speed, tapping regularity and tapping errors. The inter-tap interval is also often recorded during the task

The following sample graph compares the performance of patients with mild spastic diplegia in a single and double key Tapping Task. 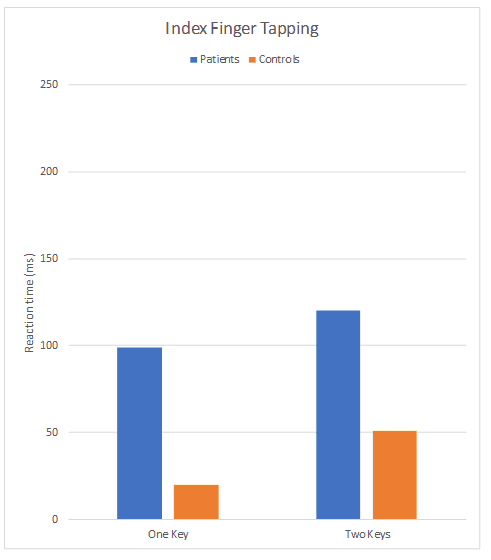 The following sample graph depicts the difference in Inter-tap Interval between the Mild Traumatic Brain Injury group and control group over a period of 30-second finger-tapping task. 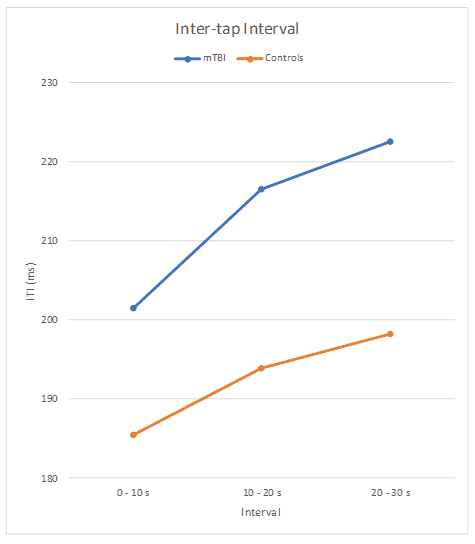 The task may become difficult to administer in individuals unable to cooperate due to cognitive or mental deficits. Factors such as age, sex, hand dominance can also impact the test results.