The Koos Score is commonly used for patient self reported assessments of knee and associated problems. It has been validated in hundreds of studies across the world with multiple translations and widely used for research purposes, clinical trials, large scale databases, and registries. It also can be applied to multiple knee injury pathologist including ACL, meniscus injuries, chondral injuries, and has both long and short term interval assessments.

This study explores the different uses and applications of Knee injury and Osteoarthritis Outcome Score (KOOS) research instrument. The development of KOOS was necessitated by the need of a single instrument which can be used in several types of knee injury and osteoarthritis (OA). Traumatic knee injuries can cause damage to multiple structures such as ligaments, menisci and cartilage among others. These injuries often lead to the later development of OA. Therefore, to be able to evaluate patients after a trauma and gain understanding in change of symptoms and function over time, a questionnaire which covers both the short-term and long-term consequences was needed.1

The KOOS was originally developed in 1995 by Ewa M. Roos and colleagues at the Departments of Orthopaedics at Lund University, Sweden and at the University of Vermont, USA.1 It is a self-administered knee-specific instrument, developed to assess the patient-reported knee outcomes in adults with joint injury or degenerative disease. It has been widely used for research purposes in clinical studies, databases and registries. The KOOS has been designed to evaluate both short-term and long-term consequences of knee injury. It holds 42 items in 5 separately scored subscales: pain, other symptoms, activities of daily living (ADL), sports and recreation (Sport/Rec), and knee-related quality of life (QOL).1.It is used in patients between 13-79years of age.2

Historically, the Knee injury and Osteoarthritis Outcome Score (KOOS) was also being used with children. But after cognitive interviews with 34 Swedish children between the ages of 10 and 16 years old were conducted, it was found that, children who had undergone knee surgery or physiotherapy had a greater understanding of the medical terminology than those who had not. Due to this lack of comprehension in those who were not familiar with the terminology or younger children, the KOOS had to be modified for them. Thus, a preliminary KOOS-Child version (LK 1.0), suitable for children aged between 9-12 years, was developed in 2012 before being updated to the current version, KOOS-Child (LK 2.0), in 2013.3

The Knee Injury and Osteoarthritis Outcome Score (KOOS) questionnaire is self-explanatory and can be administered in the waiting room or used as a mailed survey. The KOOS’s five important patient’s subscales are scored separately; Pain (9 items), other symptoms (7 items), function in daily living-ADL (17 items), function in sport and recreation-Sport/Rec (5 items), and knee related quality of Life-QOL (4 items). In the questionnaire, information on experience of the preceding week is considered. A Likert scale is used and all items have five possible answer options scored from 0 (No problems) to 4 (Extreme problems) and each of the five scores is calculated as the sum of the items included. For clinical interpretation, the five individual KOOS subscales scores are given as secondary outcomes. 2

To interpret scores, scores are transformed to a 0–100 scale, with zero representing extreme problems and 100 representing no knee problems as done in orthopaedic instruments and generic measures. Scores between 0 and 100 represent the percentage of total possible score achieved. The results of the five outcomes can be presented graphically as an outcome profile (order of subscales from left to right: Pain, Symptoms, ADL, Sport/Rec and QOL). This is in a graph with scores ranging from 0 -100 on the y-axis and the five outcomes on the x-axis.2

The KOOS has been validated for measuring outcomes in Total knee replacement (TKR), post-traumatic Knee osteoarthritis, 1 and anterior cruciate ligament (ACL) reconstruction2. The KOOS has also been used to evaluate other osteoarthritis interventions including minor knee surgery procedures, 4 conservative treatments, 5 nutritional 6 and pharmacological interventions. 7 Results from the studies show high response rates for studies of TKR in the short term, 92% at 6 months and 86% at 12 months. 8 A short-form version (KOOS-PS) which is a 7-item questionnaire derived from the original KOOS has been validated for evaluating physical function in individuals with knee OA undergoing TKR. 9

The KOOS instrument is also highly reliable and responsive to change in subjects with knee injury.2 Compared to other knee outcome measures such as the the Tegner Activity Scale,10 the Lysholm Knee Scoring Scale,12 and International Knee Documentation Committee, Subjective Knee Form (IKDC), 13 which result in a single total score, the KOOS produces 5 subscores. It includes separate subscales for assessment of ADL function and higher physical function in sports and recreation, and also a scale for knee-related QoL, which are not present in other means of measuring knee outcome. 2

Example of results presentation and analysis of a study with the objective of evaluating postoperative results 2 years after primary PCL reconstruction and comparing the results to postoperative results 2 years after primary ACL reconstruction. Hypothesis of the study is; Patients with isolated posterior cruciate ligament (PCL) injuries improve from surgery as much as patients with anterior cruciate ligament ACL injuries after 2 years.

The patients complete the KOOS report preoperatively and at 2, 5, and 10 years postoperatively. Mean KOOS subscale scores for the different subgroups are calculated preoperatively for both the ACL and PCL groups. These values are then compared with the corresponding values at the 2-year follow-up, and 95% confidence intervals (CIs) are calculated based on paired-sample t tests. The changes in the PCL patients are compared with the relative changes in the control group (ACL patients). The chi-square test is used to compare the categorical data. The correlation is then calculated using the Pearson correlation coefficient

The five dimensions of KOOS are scored separately: pain (nine items); symptoms (seven items); activities of daily life function (17 items); sport and recreation function (five items); and knee-related quality of life (four items). All items are scored from 0 to 4, and each of the five scores are calculated as the sum of the items included, in accordance with score calculations of the WOMAC Osteoarthritis Index (Table 1).1 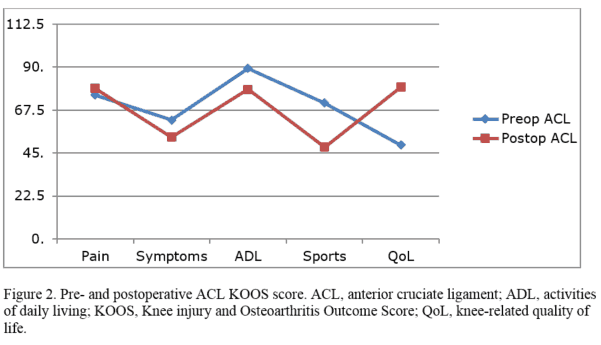 The inclusion of two different subscales of physical function relating to daily life, and sport and recreation, enhances the KOOS’s validity for patients with a wide range of current and expected physical activity levels. It has also been translated and culturally adapted into many different languages. Since KOOS was predicated on the WOMAC survey and contains many of the same questions, a WOMAC score can be calculated from the KOOS questionnaire.2 In addition, the KOOS can be used for both short and long-term outcome reporting. This means it can be used to assess weekly changes that are induced by treatments or over years following a primary injury or osteoarthritis.2

Compared to other questionnaires, the KOOS is longer and takes patients a considerable amount of time to fill out. It is also complex and can be laborious.