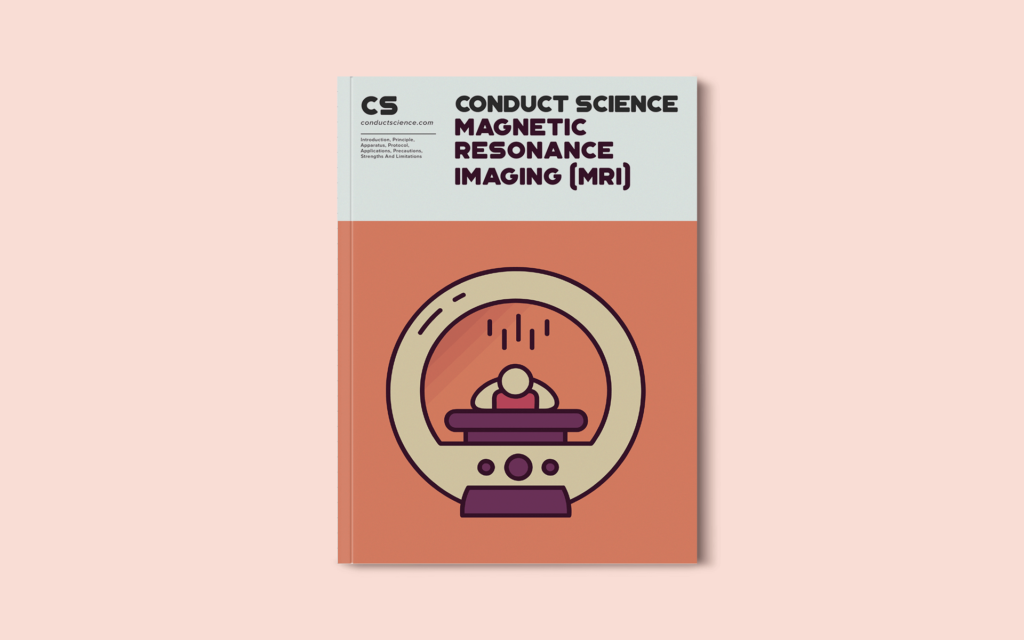 Magnetic resonance imaging is an advanced, non-invasive diagnostic medical imaging technique that provides three-dimensional images of organs. The discovery of MRI involves a series of successful events that started in 1946 when Felix Bolch proposed the new magnetic properties of the atomic nucleus. He explained the behavior of atoms at tiny magnets, and based on these, NMR tools were developed.

Techniques other than MRI, like X-ray, produce gray and flat images without contrast compared to  MRI which produces images with excellent contrast resolution in any dimension. This property helps in capturing even small lesions in tissues and to identify multiple sclerosis, tumors, tendonitis, strokes, and many other abnormalities.

This article poses the workings of magnetic resonance imaging, its principle, application, advantages, and disadvantages. You will also learn what safety measures you should take while using the machine. So, let’s get started.

The Concept of MRI and its Physics

The atomic nucleus is made of protons that contain positive charge, neutrons having neutral charge, and electrons that carry a negative charge. The similarity between these particles is to spin about their axis and possess an intrinsic spin of ½ which can be positive or negative. The spin is also called the angular momentum of the particles.

Each nucleus has its spin characteristic depending on the number of protons and neutrons present in it. For example, if a nucleus has an even number of electrons and protons, then, they can be arranged in such a way that their spin gets canceled. However, when the particles are in odd numbers, some of the spins will not be canceled, which creates a net spin-charge and produces magnetic properties known as a magnetic moment. So, when the spin is placed in a magnetic field, it rotates around its axis by absorbing photons at certain frequencies which depends on the gyromagnetic ratio of the particle. The equation explains the relation:

The magnetic property of the atomic nuclei is utilized in MRI to produce images of organs and the elements having unpaired protons are preferred (see table for MRI friendly elements). However, the hydrogen element is mostly preferred as an MRI imaging source because of the following three reasons:

The protons present in the atom are randomly oriented in the absence of an external magnetic field, however, when the magnetic field is applied to the sample, all the protons are arranged according to the applied field. This occurs in two ways:

The radio-frequency interacts with every component attached to the patient’s body (tissue, any foreign element, or metallic implants). During imaging, it is transformed into heat and the absorption and generation of heat take place in tissues. This thermal characteristic is different for different organ systems. For example, limbs dissipate thermal energy more rapidly than the abdomen whereas the eyes take much more time to dissipate thermal energy.

The radio pulse should be provided for sufficient duration to generate an intensity that rotates the net magnetization vector and produce signals which help to transform and create the image. The bound state and presence and absence of hydrogen in tissue are some of the factors that play a role in the generation of the signal. For example, hydrogens in the bone present in a tightly bound state and do not produce any usable signal.

T-1 relaxation is defined as the time tissues take for the longitudinal magnetization to reach 63% of the original magnetization. When the pulse stops, the protons in the higher energy state want to go back to the lower energy state. The bound state of hydrogen also determines the differences in the rate of relaxation of protons in tissues. For example, in fat tissues, hydrogens are in a bound state so the rate of relaxation is low as compared to water. This specific property is involved in creating a contrast image in MRI.

When the radio-frequency is applied at 90o, all magnetization flipped in the XY plane, called transverse magnetization. At the same time, the protons start to rotate “in-phase” i.e all vectors align in one direction. However, this alignment is disturbed by the other surrounding vectors. So, the rate of the flip will be different in different vectors. This will disturb the alignment of vectors in the same direction and start “de-phasing”. This phenomenon of vectors getting from in-phase to out-of-phase or de-phase is called T2 relaxation.

It should be noted that the T1 and T2 relaxation processes are independent of each other but occur simultaneously. This whole physics of protons during MRI help to create a contrast image.

The magnets in MRIs produce a strong magnetic field that forces the protons in the body to align with the field in the same direction, an equilibrium is maintained. This equilibrium is disturbed when an external radiofrequency pulse is applied through the patient. In this condition, the protons reach a higher energy state and are opposite to the applied magnetic field.

However, when the external radiofrequency pulse is stopped, the protons return to the lower energy state to realign with the magnetic field which is detected by the MRI sensors.

The time protons take to align with the magnetic field and the amount of energy released depends on the environment and chemical nature of the molecule. These differences in protons of different tissues based on the magnetic field help physicians to tell the difference between two tissues.

MR imaging has the potential to produce a clear picture of the anatomy and detect anomalies in the body. Here, clinical applications of MR imaging based on the region of the body are explained in brief.

The advantages of MR imaging include:

Despite certain limitations, magnetic resonance imaging is an efficient tool serving several clinical applications. The best thing is the absence of harmful radiation during the whole procedure. It has made it possible to produce a high quality and contrast image of affected parts. In terms of safety and sensitivity, it can replace many other invasive and risky techniques. It helps to detect any pathological changes during the early phase.

However, making the procedure more comfortable for the patients by the reduction in coil noise and tube length may help many other individuals in their diagnostic procedures. Further, advances in the process of imaging and dynamic scanning will enhance and broaden its application in the future.