The A/J strain is an inbred albino strain of mouse model. It is very frequently used in cancer research, on account of its strong tendency to develop tumors when presented with common carcinogens. It is one of the most popular strains used in mouse experiments.[1][2]

The A/J strain is originally derived from the A strain and is related to the BALB/c strain. The A strain was developed in 1921, from a cross between two albino stocks, by L. C. Strong. Stock from this strain came to the Jackson Laboratory in 1947, where the A/J strain was created.[1][2]

A/J mice have proved highly popular in immunological and cancer research, although their popularity may have decreased in recent years.[2]

Mice of the A/J strain are albino, and so have completely white fur. Their brain, kidneys, and thymus are all small relative to their overall body weight.[1][2]

Need Mazes for your research? 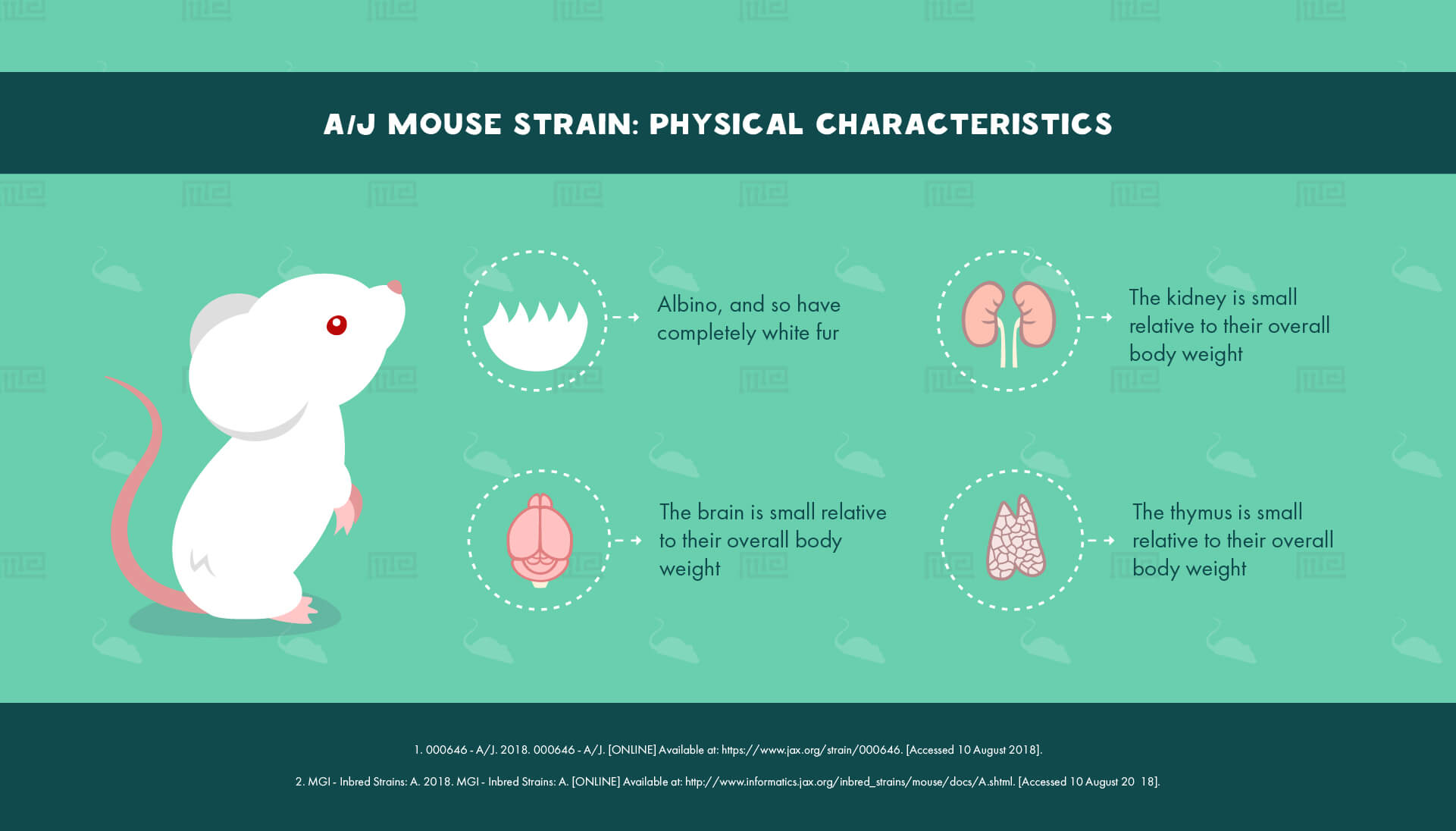 Researchers report low aggression, exploration and desire for food in this strain. Further reports of low spontaneous locomotor activity, high latency in emergence from hiding, low wheel activity, and low open field activity compound the conclusion that individuals of the A/J strain are not especially active mice.[2] Two studies detail how these mice exhibit higher than normal anxiety in the elevated plus maze and light dark box test.[3][4]

A Canadian study of the comparative ease of handling of various strains reports extreme ease of capture and holding with A/J mice, with virtually no struggling or evasive behavior observed. The A/J mice received one of the highest placidity scores of all the strains in this study, higher than both BALB/cJ and C57BL/6J, as well as minimal squeaking when held.[4]

“Intermediate” breeding performance and small litters also are reported with this strain.[2]

The most salient feature of A/J mice is their susceptibility to the development of carcinogen-induced tumors. In particular, exposure to carcinogens leads to rapid development of lung cancer. Spontaneous lung adenomas have also been observed. The females of this strain very frequently develop mammary adenocarcinomas. Myoepitheliomas are also occasionally seen.[1]

In addition to lung cancer, A/J mice exhibit other pulmonary issues. They develop emphysema from exposure to cigarette smoke in half the time of C57BL/6J. They also experience lung damage from induced asthma, which resembles the human pathology more closely than does that of the BALB/cJ mouse strain.[1][2]

Like DBA/2J and unlike C57BL/6J, A/J mice are not susceptible to developing atherosclerosis following long-term regimentation of an atherogenic (high fat, high cholesterol) diet. Furthermore, these mice do not develop insulin resistance or high glucose when placed on a high fat diet, and are refractory to both diabetes and obesity[1].

An insertion in the Dysf gene means A/J strain mice tend to develop muscular dystrophy at around four to five months of age, the effects of which are worse in the proximal than distal muscles.[1][2]

Like DBA/2J mice, this strain also possesses the mutant cadherin allele Cdh23ahl  which confers hearing loss starting at around three months of age. The hearing loss appears to be exacerbated by a repeat of ten adenines in the mt-TR gene (the mitochondrial gene for the arginine transfer RNA).[1]

Finally, A/J mice are noted for their development of a cleft palate following exposure to cortisone.[1][2] 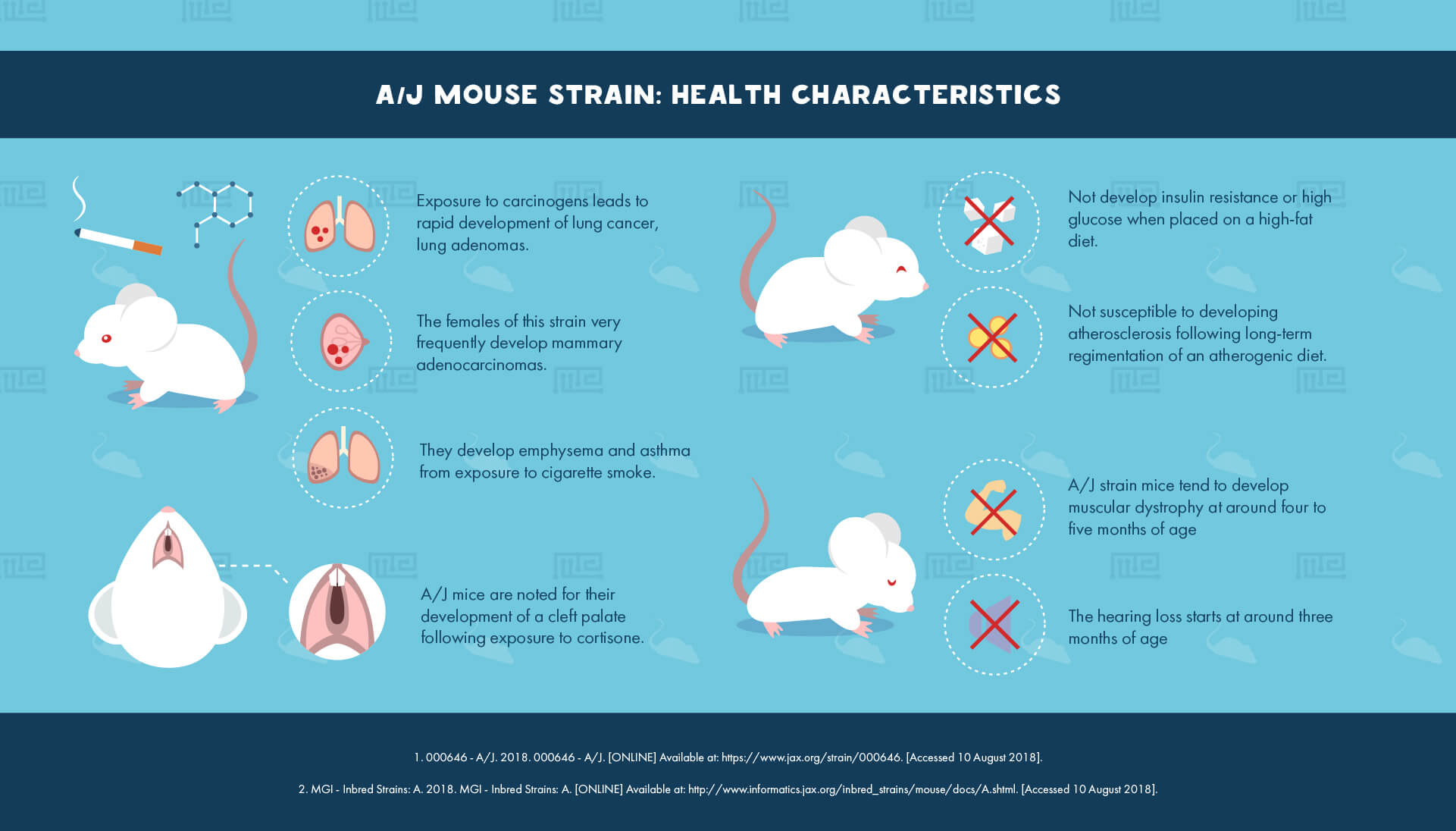 The A/J strain is well established as a model for lung cancer.[5] It has been used for studying the effectiveness of potential cancer therapies, as well as for investigating the effects of tobacco on tumor development.

It has been reported in two studies from the same lab that, while the A/J strain does allow for the characterization of increased tumorigenesis following tobacco smoke exposure, the effect size of both carcinogens and chemopreventive drugs in these mice was much smaller than in humans, meaning a very large sample of mice would be required to achieve reliable results[6][7].

In addition to cancer, A/J mice are frequently used as models for asthma, COPD and emphysema, in cardiovascular research on atherosclerosis, in developmental research on congenital and spontaneous cleft palate, and in research on hearing loss.[1]