Anhedonia, defined as the inability to experience pleasure, is evaluated in rodents using the sucrose-preference test and the intracranial self-stimulation test. The sucrose-preference test measures the tendency of an animal to consume a sucrose solution over regular water when provided with access to both.[2] Healthy animals will drink a greater volume of sucrose, while those exhibiting anhedonia will show a reduced preference for the sugar. The intracranial self-stimulation test evaluates the motivation of rodents to engage in an activity (pressing a lever or running on a wheel) that is paired with a rewarding electrical stimulus delivered through electrodes implanted in the brain.[3]

Appetite and sleep disturbances are another common component of major depressive disorder. People with depression tend to sleep and eat less than usual, although individuals with atypical depression display an increase in sleep and in food consumption. Changes in appetite can be easily assessed in experimental animals by quantifying food intake and body weight, while sleep abnormalities can be measured using electroencephalographic recordings. Like depressed patients, some animal models of depression display altered sleep patterns.[4] 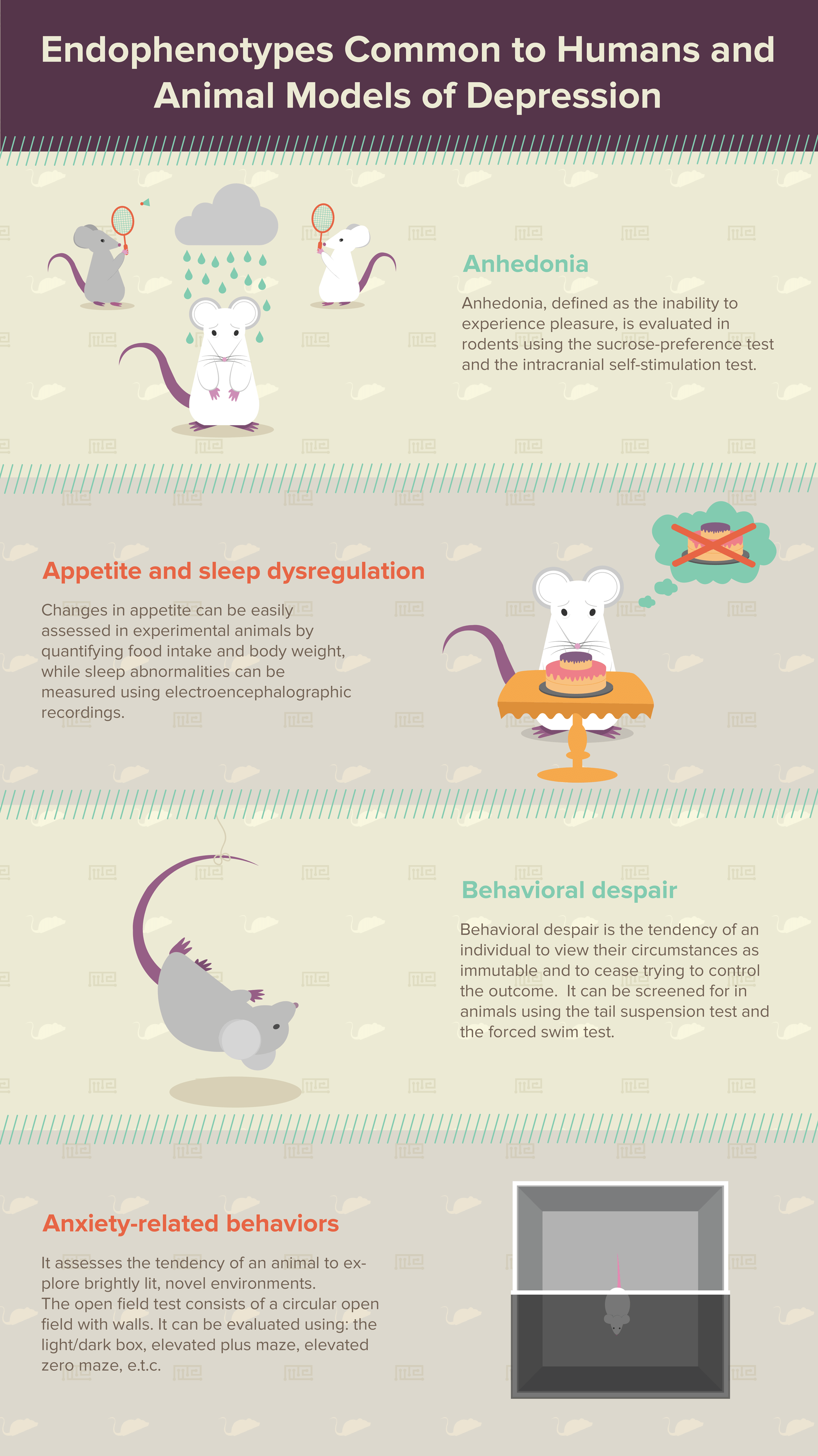 animals using the tail suspension test and the forced swim test.[5] In the tail suspension test, mice are suspended by their tails from a horizontal bar. The animals struggle to escape for a period of time, but eventually become immobile. The latency to immobility and time spent immobile are indicators of the animals’ loss of motivation to escape. The forced swim test shares a similar theoretical basis, except that the animals are placed in an apparatus filled with water, and their swimming versus floating (immobile) time is quantified. Both of these tests are used to screen compounds for novel antidepressant agents. The activity of an animal during these tests may reflect the ability of a pharmacological agent to acutely increase levels of the monoamines serotonin and epinephrine within the brain.

Anxiety is a common comorbidity of depression. There are a number of different apparatuses for assessing anxiety-related behavior in animals, all of which assess the tendency of an animal to explore brightly lit, novel environments.[6]

The light/dark box is partitioned into a brightly illuminated compartment and a dark compartment.

In each of these tests, an animal with heightened anxiety will spend less time exploring the open and/or illuminated areas of the apparatus. See our article on depression testing in rodents for more on this.

A variety of methods can be used to recapitulate many of the core symptoms of major depressive disorder in animals. These animal models can be evaluated based on their face validity, construct validity, and predictive validity.[8] Face validity refers to how well the animal model mimics aspects of the human disorder and can be assessed by testing for common endophenotypes. Construct validity evaluates how well the model shares a similar set of causes with the human disorder, while predictive validity assesses whether the treatments that are effective for depression in humans can also reverse the depression-like symptoms in the animals.

Learned helplessness is a model is based on the observation that following repeated exposure to an uncontrollable, inescapable stressor, such as an electrical shock, animals will subsequently fail to try to escape the shocks when presented with an escape route.[9] Animals exposed to this procedure can also develop symptoms associated with depression, such as weight loss and sleep alterations. This model is considered an acute stress model, as some of its effects can be produced within one day.

Other models rely on longer-term stressors. The chronic unpredictable stress model involves the random, intermittent administration of stressors that change periodically, preventing the animal from adapting to any particular stressor.[8] Some examples of these stressors include predator odor exposure, overnight light exposure, wet cage bedding, and physical restraint. Several weeks of chronic unpredictable stress produce depression-like symptoms in the animals. Another long-term stress model is the social defeat model, in which a male rodent is introduced to the home cage of older, larger aggressor animal. Repeated physical subordination causes stress-susceptible animals to develop a depression-like syndrome over the course of several weeks.

While a number of other models for depression exist, including genetic models, olfactory bulbectomy, and early maternal deprivation, stress-induced depression models are some of the most widely used. They exhibit strong face validity, sharing many phenotypic outcomes with depression. They share a common etiology with depression, as the disorder often develops following periods of extreme or chronic stress. Further, these stress-induced syndromes are at least partially reversible by the administration of antidepressant medications. These and other animal models of depression will continue to be important tools in the search for new and more effective depression treatments.

See our article on depression testing in rodents for more on this.