The C57BL/6J strain is the most commonly used of all inbred mouse strains. It was also the first mouse strain to have its entire genome sequenced. It has been used in a very wide range of medical studies, most prominently cardiovascular research, as well as for the generation of mutants and transgenics.[1][2]

C57BL/6J derives from the C57BL strain which was developed in the early 1920s by Clarence Little at the Bussey Institute for Research in Applied Biology at Harvard.[3][4] Of the various substrains derived from C57BL, C57BL/6 quickly became the most frequently used.

Over the years, genetic drift has meant that mice of the C57BL/6 strain kept in different laboratories have come to differ widely in physical, behavioral and health characteristics. A major distinction today is made between the C56BL/6J strain bred at the Jackson Laboratory and the C56BL/6N strain bred at the NIH.[4]

Use of this strain has exhibited path dependency, where the initial frequent use of these mice encouraged frequent use in the future, thus sustaining the strain’s popularity for no other reason than that it was initially popular. Over 80% of experimental mice from American suppliers are C57BL/6 and about 90% of these are C57BL/6J.[3]

The C57BL/6J strain has dark brown (nearly black) fur. Consequently, it is also referred to as “C57 Black”. Their bone density is quite low.[1] They show an unusually high sensitivity to pain, and low temperatures, with analgesics having limited effectiveness here.[5] Hematopoietic stem cells from this strain show slower senescence than those from BALB/cJ and other common strains.[1] 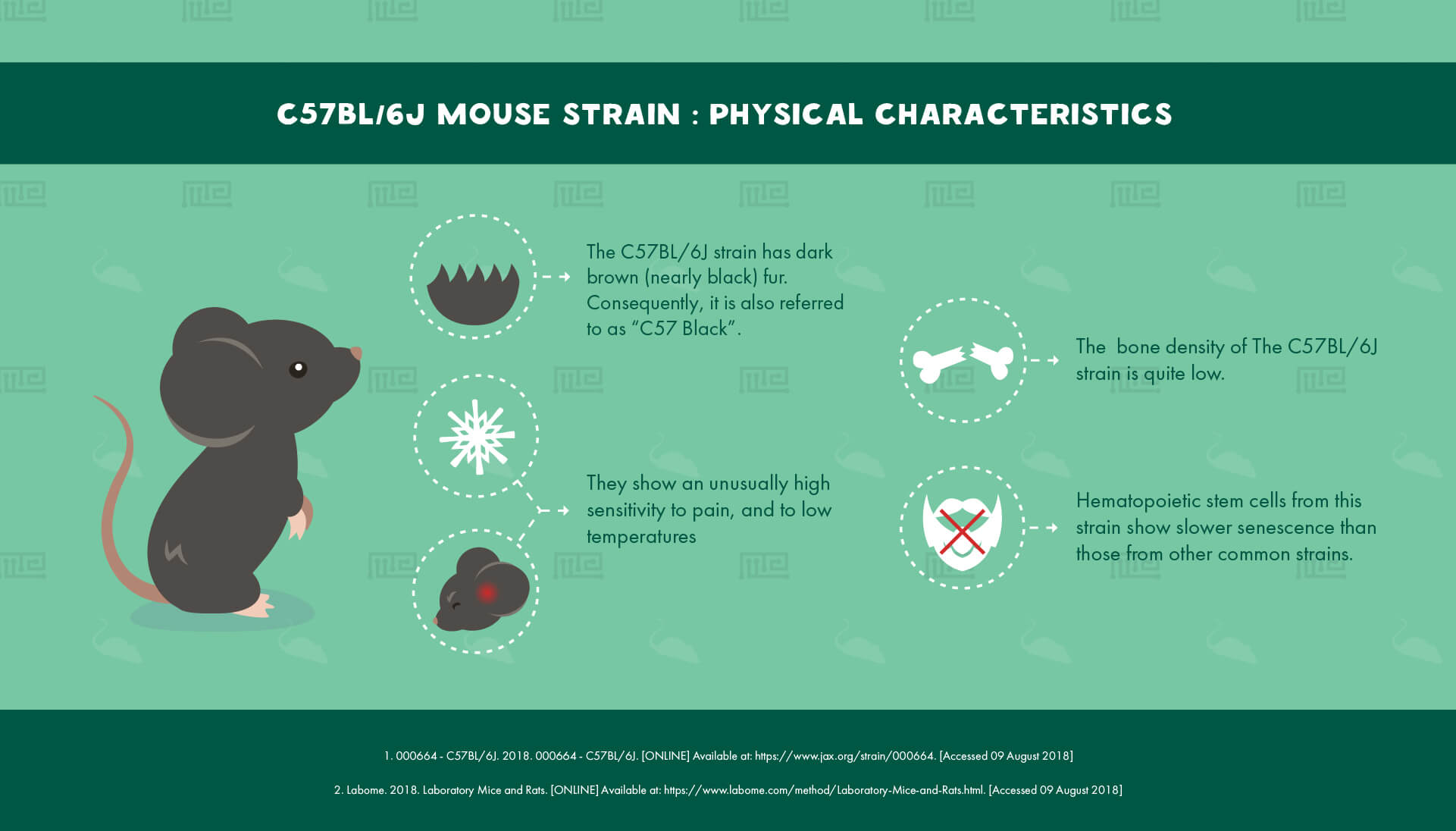 The Jackson Laboratory reports that these mice are more prone to biting when being handled than more docile strains such as BALB/cJ.[1] However, a Canadian study from 2003 using C57BL/6J obtained from the Jackson Lab reports that this strain was very placid, did not squeak very much when handled, did not evade capture for very long when being picked up, and only occasionally showed vigorous struggling when held.[10]

Since C57BL/6J is not a wild-derived strain, it should not be surprising that it is generally quite amenable to being handled.[10]

One study[6] observes that females of this strain display less anxiety in the elevated plus maze and open field tests than female BALB/cJ mice. With regard to locomotor behavior, C57BL/6J mice have shown much higher immobility in the forced swimming test than other inbred strains, although they also had very high swimming distance.[7] C57BL/6J performs very well on the rotarod test, suggesting the forced swimming immobility is more likely due to depressive mood than motor deficits.[8]

Female mice of this strain display “barbering” behavior when housed with other mice i.e. they tend to remove the hair and whiskers of less dominant mice in the same enclosure.[10] One scientist describes the strain as “alcoholic” since they have a greater tendency than most mice to develop alcohol and morphine addiction.[3]

C57BL/6J has a long life span and is quite fertile.[1] The strain exhibits resistance to a variety of cancers, but nonetheless expresses mutations to the full.[1]

It has a number of digestive system abnormalities including an increased tendency to develop atherosclerosis, type II diabetes, and obesity. A group of eight genes, known as the Ath genes, has been implicated in this phenotype.

The strain also has hearing abnormalities: it tends to lose hearing with age and does not experience seizures generated through sound (the latter is linked with multiple Asp genes at various loci).[1][2]

C57BL/6J often displays microphthalmia (smaller than normal eyes) conferred by the Mitf allele, hereditary hydrocephalus (accumulation of cerebrospinal fluid around the brain) caused by the gene Mf1, loss of fur from excessive grooming habits, and more frequent than normal malocclusion (misalignment of the teeth).[1][2] 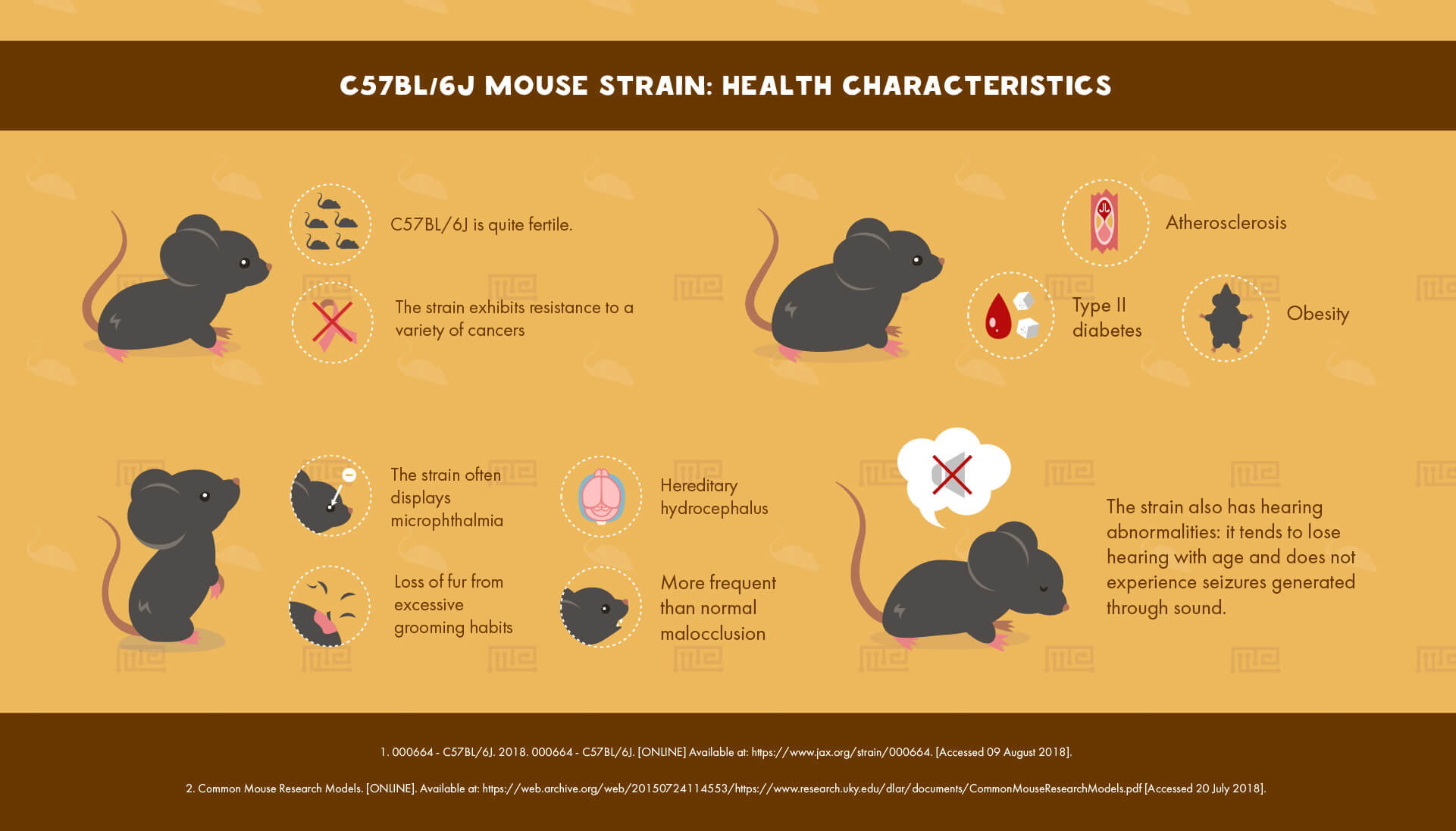 As the most popular of all inbred strains, the C57BL/6J has been used in virtually all major areas of biomedical research. It is very frequently used in the generation of congenic and transgenic mice for the study of mutant phenotypes.[1]

In terms of medical applications, this strain has been used in cardiovascular research, especially in the study of atherosclerosis, developmental research including defects of the eyes and skeleton, diabetes research of various kinds including type I and II as well as obesity, immunological, haematological, and neurobiological research especially surrounding hearing loss and hearing abnormalities.[1]

Sheep as an Animal Model

Sheep as an Animal Model