CE/J is an inbred strain of mouse that is noted for its strong resistance to amyloid deposition, making it an interesting model in the study of amyloid-linked diseases.[1]

The CE/J lineage is descended from wild mice that were captured in Illinois in 1920 by Knight. It has been surmised, due to the mouse’s apparent “non-wild” behavior (see below), that it was crossed with an unknown strain of pre-established laboratory mouse at some point prior to inbreeding. Eaton inbred the strain for around fifteen generations, and then passed them to Woolley who finally took them to the Jackson Laboratory in 1948.[1][2][3]

CE/J mice have a unique gray/grayish-white coat color which allows them to be very easily distinguished by eye from other strains, as well as black eyes and small ears.[2][1][3] They very rarely possess an accessory spleen.[2] Older individuals tend to have larger than average body weight.[1][3] 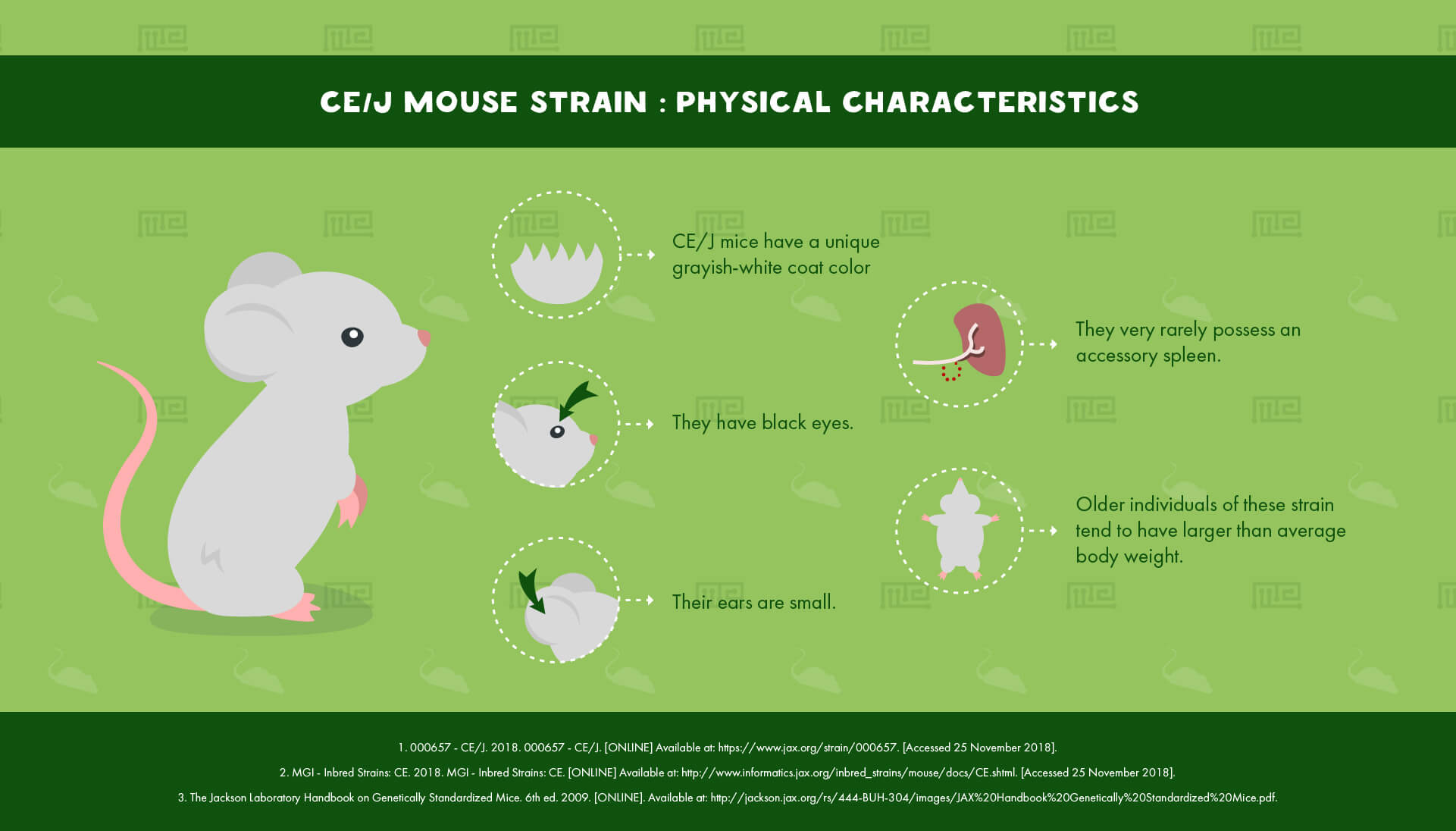 The Jackson Laboratory describes CE/J mice as “very, very jumpy”, “hyperactive”, “nervous”, “shy” and “easily frightened”, before cautioning that they require gentle handling.[3] It seems clear then that researchers requiring a calm, docile model would be best advised not to use CE/J.

Their reproductive performance is described as poor, although with large litters, skewed towards male offspring. Researchers also caution that CE/J have a strong tendency to chew the ears of their young.[2][3]

Overall, it has been noted that the behavior of CE/J mice resembles that of laboratory mice much more than most wild-derived strains, suggesting that there may have been an undocumented cross with another laboratory strain at some point during their development (see above).[1]

Reports on anxiety levels in CE/J seem contradictory. While this strain has a reputation for being nervous (as noted above), a 2008 study comparing various strains found that CE/J was one of the least anxious in the elevated zero maze. The strain also displayed high open field activity and low rates of defecation.[4]

The most salient health characteristic of CE/J mice is their high resistance to amyloid deposition and amyloidosis. Amyloidosis is a condition in which the protein serum amyloid A (SAA) is deposited under the skin in response to inflammation.

CE/J mice produce a form of SAA called SAA.2.2 which is physically incapable of forming amyloid fibrils. Even when injected with a viral vector that elicits the expression of amyloidogenic proteins, this strain remains resistant to any amyloid deposition.

These mice are also noted for developing a range of different tumors. One-third of CE/J females develop ovarian cancer by 20 months of age, while males and gonadectomized females show cancer of the adrenal cortex by 6 months or one year of age respectively. The gonadectomized females also have a high incidence of pituitary tumors.

Like many inbred strains, CE/J expresses the mutant allele ahl of cadherin 23, leading to progressive hearing loss after 10 months of age.[1] 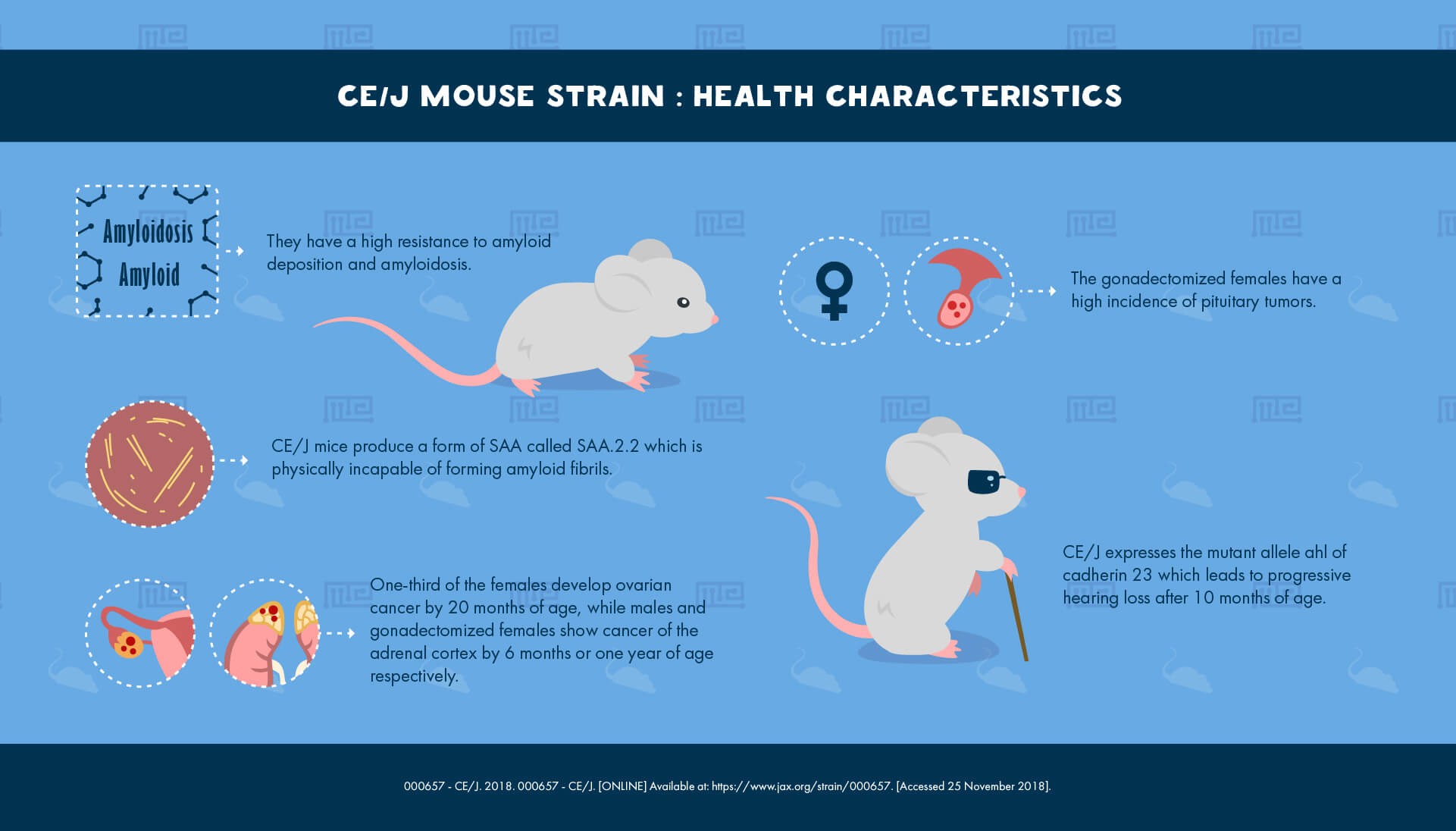 CE/J is not one of the most frequently used models, due to its handling difficulties and low breeding performance. However, it can be applied to a range of different research areas, including the study of various cancers, amyloidosis and hearing defects.[1]