Memory and emotion are two of the faculties central to human psychology and human life and are closely intertwined. From this interaction, we can derive a concept of emotional memory, a concept relevant to both a neuroscientific and a medical context which can also be assessed through behavioral testing.

The use of mouse models for the study of behavioral neuroscience and the investigation of disease pathology is ubiquitous in science. Paradigms have been developed that allow scientists to assess the effects of drugs and diseases on the emotional memory of mouse models. The results of these studies have been foundational for research on a number of important human diseases.

What is Emotional Memory?

While memory and emotion may seem like very different phenomena, recent neuroscientific research continues to uncover tight links between them. Our memories are emotionally laden, and attaching affective content to our experiences helps us to behave more efficiently, allowing us to quickly evaluate different scenarios and make helpful decisions. This synergy between emotion, memory, and behavior may be the basis of what is commonly called “intuition”.

An emotion is a psychological phenomenon, something subjective that is experienced and felt by one particular individual e.g. a person may feel happy or sad. Since these emotions are mental phenomena, they must involve neural processes. Emotions also have somatic correlates known as “affects” e.g. fear may cause an increase in heart rate or increased sweating. Since emotions are impossible to objectively measure and characterize (i.e. we can never know if a mouse is really feeling something), affects and neural correlates, as well as the behaviors they impact, have become the variables of interest in the study of emotion.

A lot of interest has centered on the role of the amygdala. This brain region, situated in the temporal lobe, is most commonly associated with the processing of fear (the “fight or flight” response), although its functions are more complicated than commonly assumed. The amygdala integrates episodic memories with the sensory experiences associated with those memories. This allows the subject to learn which actions lead to experiencing aversive stimuli, and so adjust their behavior accordingly.[2]

Most knowledge of functional modularity in the brain comes from case studies of patients with brain damage. Since the amygdala is a small region deep in the brain, it is rare for a patient to have damage localized solely to this region, and so the amount of data on this subject is small. Patients with specific amygdala lesions do still exhibit some emotional memory, and their emotional responses seem normal, but they have issues integrating their emotional responses with their memories and in particular, find it difficult to filter out key information concerning emotion-laden events.[2] Mice with amygdala lesions perform badly in fear conditioning tests.[3]

The hippocampus has also been implicated in emotional memory. Traditionally, the hippocampus is seen as the site in the brain where short-term episodic memories “mature” into long-term memories which are then stored in the frontal cortex. However, recent research has extended knowledge of the role of the hippocampus to more emotion-focussed situations, situating it as part of a system where it works in tandem with the amygdala.[2]

In humans, work by Antonio Damasio and others has revealed how a region of the frontal lobe known as the orbitofrontal cortex (OFC) appears to use emotional memories to make decisions. Patients with OFC lesions have intact practical reasoning capabilities but are impulsive and unable to make good, intuitive decisions on the basis of reasoning and evidence.[4] A region analogous to the OFC is thought to exist in the brains of mice, although this is disputed.[5] 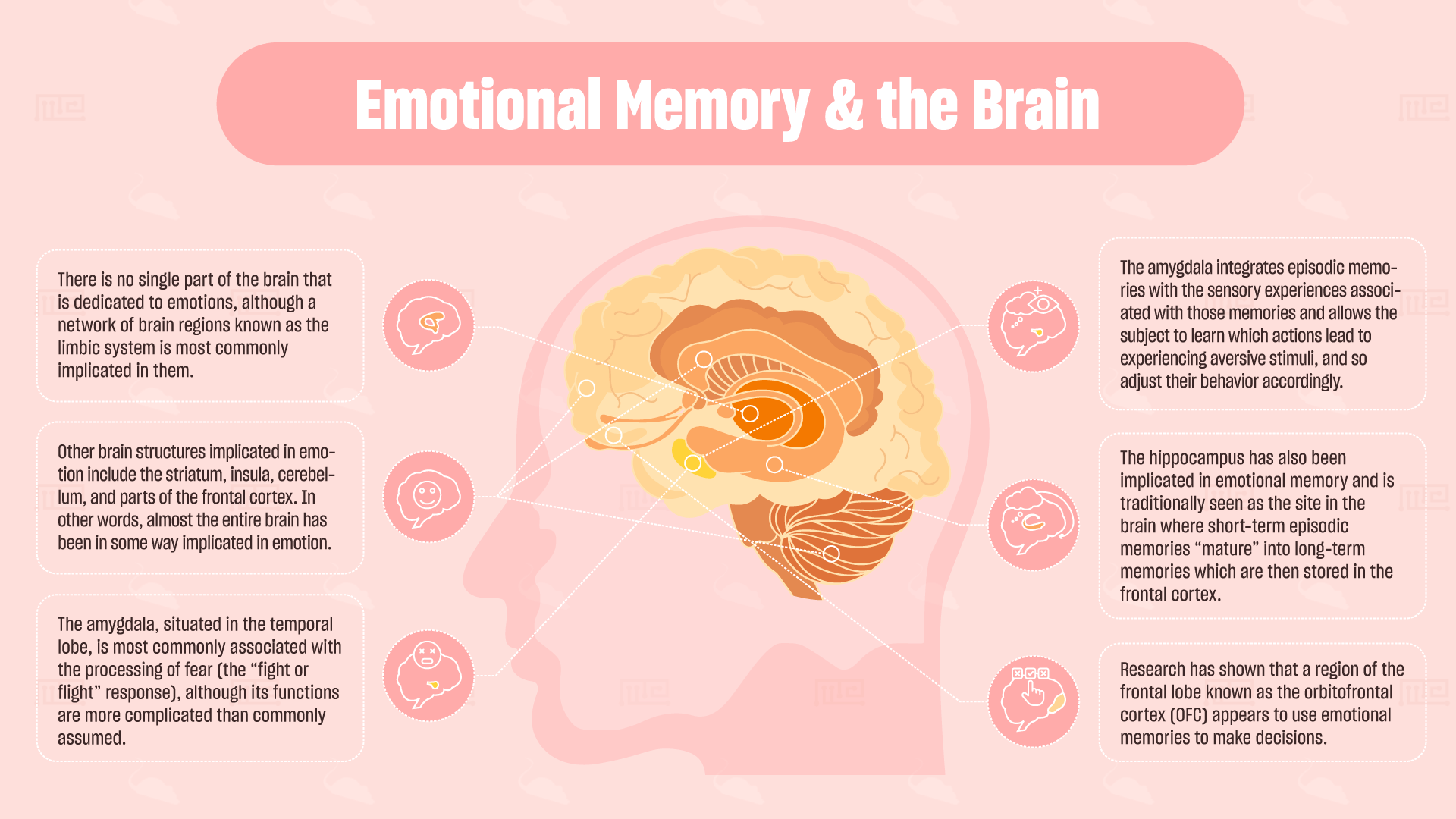 The most prominent condition affecting emotional memory in humans is Alzheimer’s disease (AD). AD is a neurodegenerative disorder in which the accumulation of protein plaques in neurons is associated with mass neuronal death and loss of cognitive functions, especially loss of short-term episodic memory in the early stages. One of the main regions affected by AD is the amygdala, leading to rapid impairment in the formation and retrieval of emotional memories.[6]

Emotional memory is also negatively impacted in patients with bipolar disorder, a psychological condition causing sudden and intense mood changes. A 2008 study showed that the memory-enhancing effect normally seen with emotionally laden information in healthy participants was not seen with bipolar individuals. Further, unlike controls, when asked to recall and describe how an emotionally laden narrative had affected them, bipolar individuals did not highlight the emotional aspect of it.[7]

Ageing, while typically not considered a medical condition as such, is associated with a number of pathological symptoms, among them, memory loss. Stereotypically, elderly humans show a reduction in short-term episodic memory and working memory, as well as difficulties in forming new declarative and procedural memories. Two studies show that the elderly have a better memory for positive than negative events, and suggest this may be due to a shift in activity over time from the amygdala and hippocampus to the frontal cortex.[9][10]

The use of fear as an instrument in learning and memory experiments has a very long precedent. Neuroscientist Eric Kandel famously used fear conditioning with the sea-slug Aplysia in the 1960s, designing an electric-shock based paradigm to study synaptic plasticity. The incorporation of similar techniques into behavioral experiments with mice and rats has now become very popular, and standardized experimental setups have emerged to administer and assess them.

Many studies have used fear conditioning to assess emotional memory. For example, a 2016 paper from a French research team examined the effects of radio frequency electromagnetic fields on the brains of rats. They found that the application of RF-EMF was associated with astrogliosis in the rats, and this, in turn, was associated with a worse performance than controls in contextual fear conditioning.[13]

The Passive Avoidance Task is a paradigm that is similar to fear conditioning, used with research on CNS disorders. Like with contextual fear conditioning, the mouse comes to form a memory associating a certain environment with receiving an aversive stimulus. The apparatus used in the passive avoidance task also borrows design elements from the light-dark box test.

One example of a study employing this paradigm is a paper from 2014 examining the effects of phosphodiesterase inhibitors on emotional memory in mice. They found that the drug rolipram, increased the latency to move to the aversive compartment, suggesting that it increased the strength of emotional memory. This corroborated previous speculation that rolipram could be used to improve memory in human Alzheimer’s disease patients.[15] 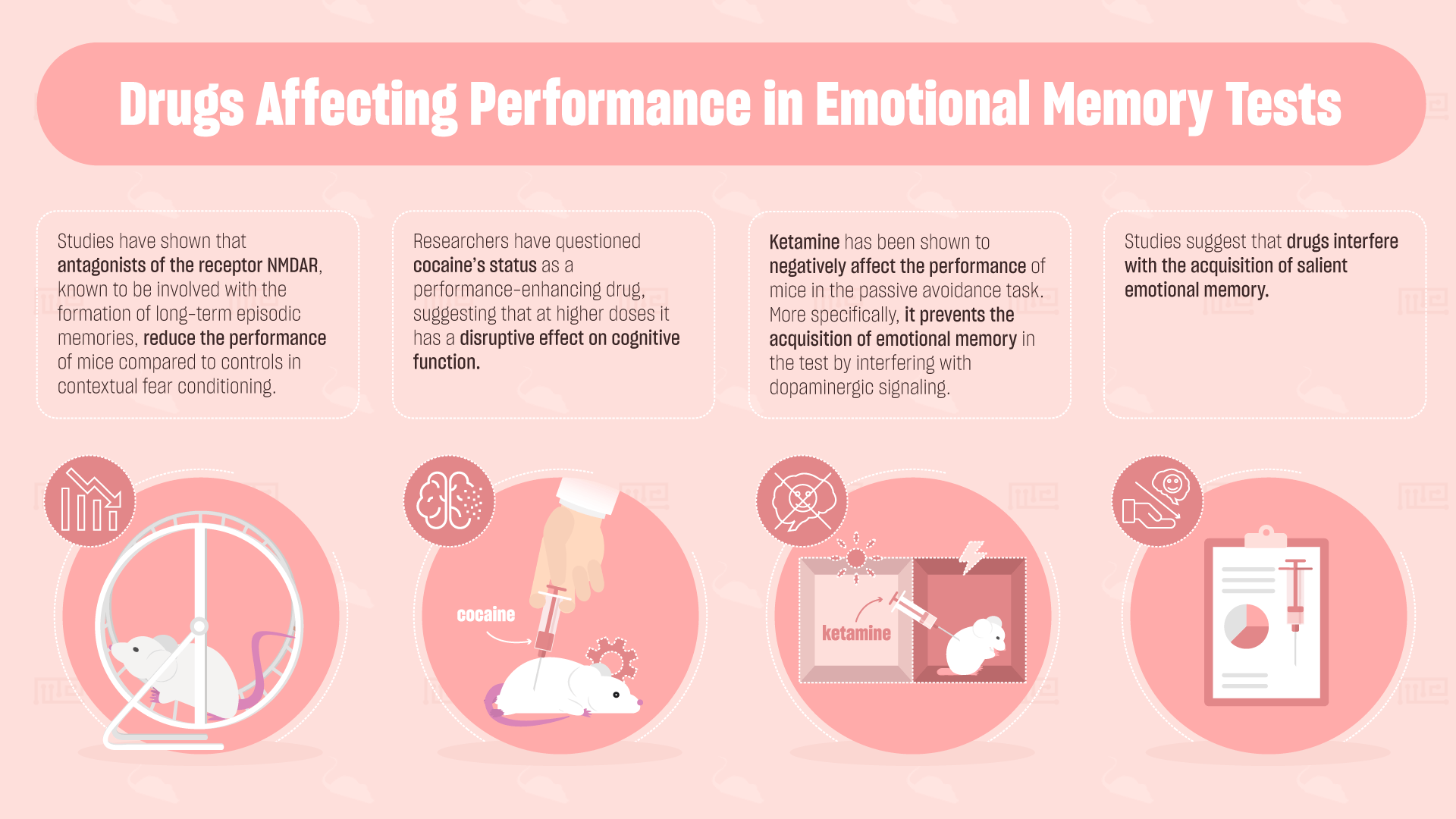 Researchers have investigated the effects of many drugs on mouse performance in fear conditioning tests. For example, several studies have shown that antagonists of the receptor NMDAR, long known to be involved with the formation of long-term episodic memories, reduce the performance of mice compared to controls in contextual fear conditioning. Further research has shown that this effect is not due to state dependency (where performance in memory tests depends on the current state of consciousness of the subject). This has implications for the treatment of anxiety disorders in humans.[16]

A complex effect was seen in one study when mice were administered with the recreational drug, cocaine. At low doses, the drug enhanced memory in contextual fear conditioning. However, above a certain dosage threshold, increasing dosage caused fear conditioning performance to gradually worsen. This led the researchers to question cocaine’s status as a performance-enhancing drug, suggesting that at higher doses it has a disruptive effect on cognitive function.[17]

Ketamine, a drug used both recreationally and now for therapeutic purposes, has been shown to negatively affect the performance of mice in the passive avoidance task. More specifically, researchers argue that ketamine prevents the acquisition of emotional memory in the test and that it does this by interfering with dopaminergic signaling. The administration of dopaminergic antagonists was observed to alleviate the effects of the ketamine.[18]

Besides dopaminergic pathways, cholinergic pathways have also been implicated in emotional memory via the effects of drugs. One study reports that four different cholinergic antagonists were all able to reduce the performance of mice in the passive avoidance task. This reduction only occurred if the drugs were administered before training but not afterward, suggesting again that the drugs interfered with the acquisition of the salient emotional memory.[19]

A suitable degree of emotional memory is vital for a functioning human life. Emotional memory is impacted by aging, drugs, and a range of important diseases. Experimental protocols have been developed to investigate this. It is hoped that the information provided in this article will assist researchers in further elucidating the workings of emotional memory in mouse models and in the human brain.