Researchers, who study the pathophysiology of mood disorders using animal models, do so knowing that there is no way to replicate a mood disorder in an animal (i.e. there is no such thing as a “depressed mouse” or an “autistic mouse”). Instead, tests are designed to test various core symptoms of the disease in question. For example, with depression some of the core depressive symptoms include: anhedonia (an impaired capacity to experience or anticipate pleasure), increased anxiety, and learned helplessness. A certain number of these depressive symptoms may be alleviated by exposure to an enriched environment (EE).

In a rodent, each of these core symptoms can be tested using a variety of behavioral tests. Anhedonia is typically tested using the sucrose-preference test. In this test, mice are given the option to drink from regular water or sweetened water. Typically, mice will prefer the sweet water, but in animal models of depression there will often be no preference, demonstrating a lack of baseline pleasure-seeking behavior. Anxiety is often tested in the open-field test or the elevated plus maze and learned helplessness is typically tested in the learned helplessness paradigm, the forced swim test or the tail suspension test. 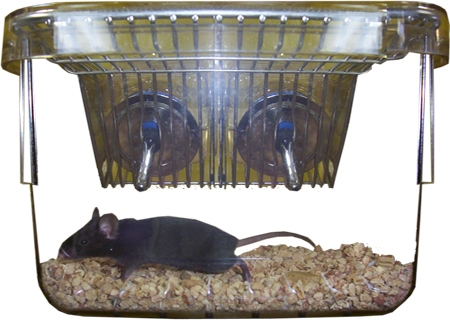 Once a difference in performance is detected between the experimental and control rodent (for example, a transgenic versus a wild-type mouse) in a battery of behavioral tests, various interventions (pharmacological, social, environmental, etc) can then be tested for their efficacy.

As socially monogamous rodents, prairie voles are especially susceptible to the negative effects of social isolation (depression, anxiety, negative physiological outcomes). Isolated prairie voles will typically demonstrate poor behavioral outcomes in the forced swim test, open field test, and elevated-plus maze after social isolation. Interestingly, in a study by Preihs et al (2) the intervention of environmental enrichment for animals rescued behaviors in all three of these tests. However, in tests with other rodents (detailed below), enriched environment intervention is not always sufficient to rescue depressive symptoms.

As another example of a case where Environmental enrichment for animals succeeds, transgenic BDNF-KIV mice, (BDNF-KIV stands for promoter IV-driven brain-derived neurotrophic factor, one of the major growth factors of the brain) show depressive symptoms in behavioral tests (1). As such, this mouse is a good model for testing the efficacy of various interventions. In a study by Sakata et al, BDNF-KIV mice were given three weeks of environmental enrichment and then tested on the tail-suspension test, open field test and the sucrose preference test. Notably, the environmental enrichment for animals rescued the behavioral deficit across all three tests. Furthermore, because BDNF-KIV is important for neurogenesis (the growth of new neurons) in the hippocampus, the researchers tested whether the enriched environment intervention was mediating some sort of neurogenic effect. Indeed, the neurons in the BDNF-KIV mice show decreased neurogenesis and shortened dendritic length. The EE intervention reversed this effect and increased neurogenesis in the transgenic mice. This study showed: (1) environmental enrichment for animals is an effective intervention for the treatment of depressive-like symptoms in mice and (2) this positive effective may, in part, be mediated through neurogenesis.

Lastly, in a study using rats with congenital learned helplessness (cLH), EE did reverse some depressive-like behaviors, but not all – and the positive effect also varied by age (3). This particular study highlighted the complex interaction between genetic predispositions and the environment. The EE did reduce learned helplessness behavior in the 14-week-old (and not in the 28-week-old) rats. Interestingly, and in contrast to the transgenic BDNF-KIV mice mentioned above, the cLH rats did not show anhedonia (consumption of sweetened condensed milk was comparable to control rats).

The bottom line: environmental enrichment for animals is a potentially useful and effective intervention but does not work apart from various factors such as genetic predispositions and developmental trajectory (age matters). Studies that investigate the molecular mechanisms by which environmental enrichment for animals may be mediating its therapeutic effect (such as via neurogenesis in the KIV-BDNF mice) will be especially important for determining when EE interventions can be most beneficial.

If so, please join our community of Neuroscientists for exclusive weekly online scientific tips and tricks, and get a FREE copy of our behavior neuroscience guide!