In the late 1890’s, Ivan Pavlov conducted his famous experiment, now known as Pavlov’s dogs. The idea behind the experiment was that his dogs salivated whenever he fed them food. But then, he noticed that his dogs started salivating when he entered the room, even if he wasn’t feeding them. So, he tested the association between food and salivation. He rang a bell, which normally didn’t cause a response, every time he brought in food. Soon enough, the dogs associated the bell ringing with the food, and began to salivate, even when only the bell was rung and no food was presented. This was the founding experiment behind classical conditioning, which takes advantage of associative learning.

Fear is an evolutionary defense mechanism that is acquired rapidly and is long-lasting. Fear conditioning takes advantage of this association by presenting a harmless stimulus (known as a conditioned stimulus) with an aversive stimulus (an unconditioned stimulus). The animal will reflexively fear the aversive stimulus, and eventually, it will come to associate the harmless stimulus with the aversive stimulus, and begin to fear the harmless one[2]. A famous case of this is Little Albert. A young baby named Albert played with a white rat with no fear, only curiosity. However, whenever little Albert touched the rat, the experimenter made a loud sound, which frightened him. Eventually, Albert learned to associate the white rat with the aversive sound, and began to fear the white rat. Not only that, but he also feared other white, furry objects, such as rabbits, dogs, or fur muffs[2].

In modern research today, fear conditioning is achieved using a fear conditioning chamber. The chamber usually consists of an electrifiable grid floor, a shock generator, and a sound source. Commonly, different innocuous sounds are played along with an aversive shock to the foot, so that the animal associates the sound with the shock.

There are a few common types of associative learning that are used:

Cued or delay fear conditioning takes place when the aversive stimulus is presented at the end of the conditioned stimulus.

Trace fear conditioning has a temporal aspect. The aversive stimulus, instead of being presented at the same time as the conditioned stimulus, is presented after a certain time interval. Here, it requires the animal to associate the two events, even if there is a pause in between. This complicates the test, as it requires additional brain regions to incorporate the temporal aspect of the stimuli.

Learning associated with fear has been proposed to work through the amygdala, a brain structure in the temporal lobe.[2] How have people tested this theory? As we’ve alluded to already, one way to measure fear is through freezing, so we can measure the amount of time the animal is spent frozen as opposed to exploring or walking around as usual. We can then lesion the amygdala and look at the effects on freezing time. Permanent lesions will abolish the fear association, and thus reduce the freezing time. 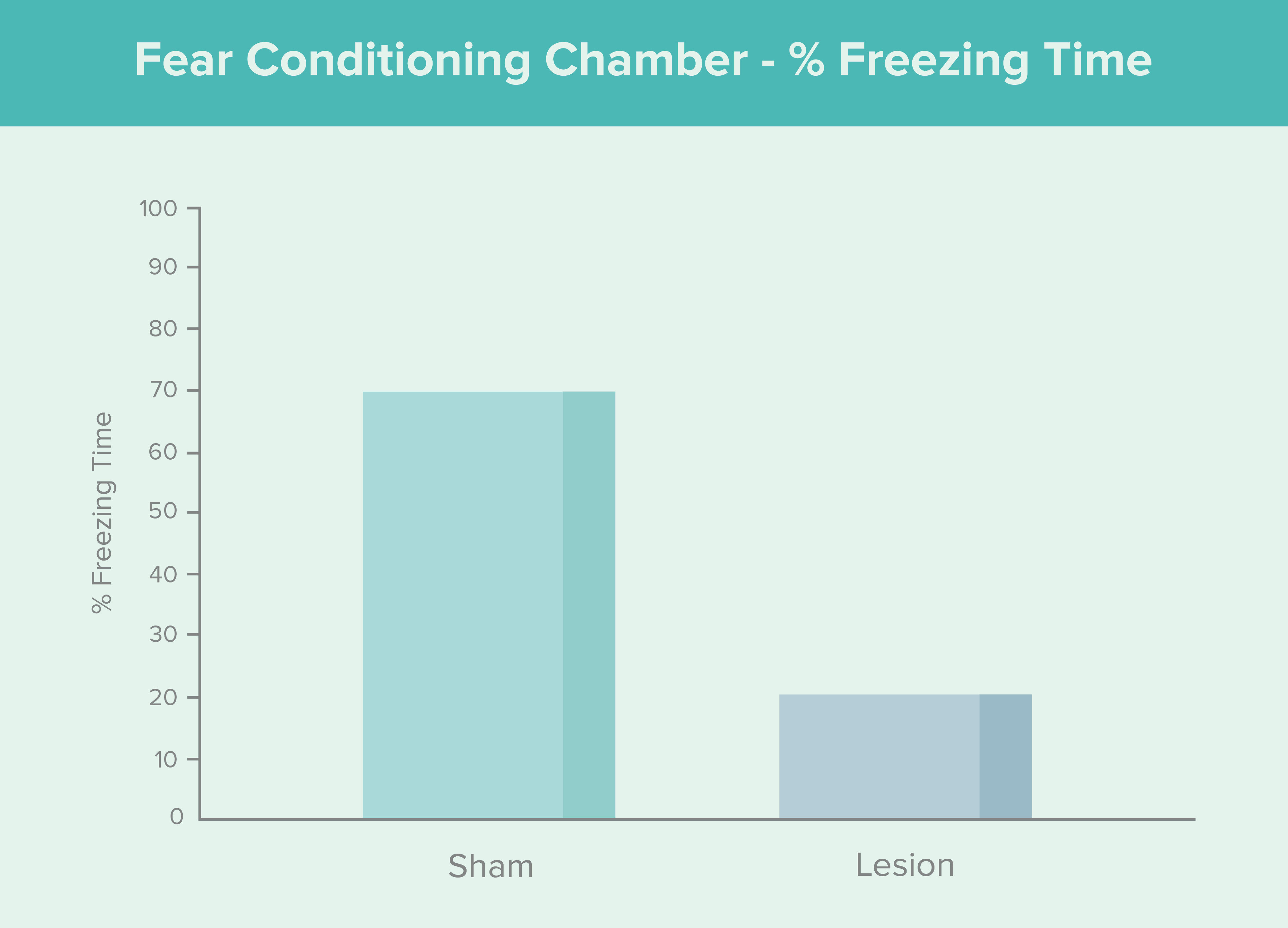 Other Applications of Fear Conditioning

Fear conditioning is also used to look at synaptic plasticity. Synaptic plasticity is the brain’s ability to strengthen or weaken its neuronal synapses in response to experience-dependent activity. For example, children learn languages much faster than adults do because their brains are more plastic, and are able to adapt to the language being used in their environments.

Interesting research has been conducted on the role of synaptic plasticity and post-traumatic stress disorder (PTSD). PTSD is a disorder that develops after a traumatic experience, causing fear even in innocuous situations. PTSD has been shown to alter the amygdala, hippocampus, and prefrontal cortex, all of which are involved in fear conditioning, and people with PTSD show over-sensitization to stress when they are tested with fear conditioning paradigms. It has been suggested that pathways involved in synaptic plasticity are altered, which leads to the activation of the brain areas involved in fear conditioning and learning, perhaps explaining why certain objects in innocuous situations can cause a fear response.[3]

Overall, the fear conditioning chamber is extensively used to test associative learning. It has wide applications for a variety of disorders associated with learning and fear, and provides a simple yet powerful way of testing the effects of drugs and treatments.