In today’s installment of the Maze Engineers blog, we’ll be exploring more sex differences in maze studies. This time, we’ll be looking at the Forced Swim Test (FST). 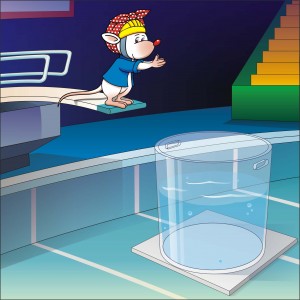 Float or swim? The forced swimming test is a measurement of anxiety and depression in rodents.

As we’ve mentioned before, finding differences in trial performance between male and female subjects is becoming increasingly important in anxiety research. Studies have shown that there are differences in how men and women react to stress, anxiety, and depression on both the neurological and psychological levels; many report that depression is twice as common in women as in men.

One test that’s commonly used in anxiety research is the Forced Swim Test. In this test, mice are placed in a cylinder filled with water, where they are made to swim for 15 minutes. After that, they’re left alone for a day before being placed back in the container. Instead of swimming again for their life, the mice tend to float passively without making much effort to escape. If learned helplessness or depression come to mind, you know what we’re talking about.

When placed in the same test, this time with antidepressants, mice exhibit less passive behaviors, especially Selective Serotonin Reuptake Inhibitors (SSRIs, or a happy drug) since their effects include increased physical activity (in this case, swimming).

Previous forced swim test studies have been known to use sterilized female mice, but this only tells us half of what we need to know: while it is important to get a full picture of how females react to stress across their lifespans, monitoring the estrous cycle makes this difficult. Learn more about Forced Swim Test here

The question here is: Do sex differences really affect stress and anxiety? In particular, how does this apply with females that are still fertile?

Kokras et al. (2015) decided to investigate this for themselves by putting two groups of rats (male and female) through the forced swim test. This time, female rats that were still fertile were used.

As in previous studies, the subjects were given antidepressants following the initial testing phase. Sertraline, an SSRI, was used here since previous studies using sertraline revealed varying effects between male and female. Researchers gave the rats three injections of varying amounts of sertraline (10 mg/kg, 40 mg/kg) in a 24-hour period.

To monitor the estrous cycle of the female rats, the researchers kept track of estrous (the state of sexual excitability) by using cotton swabs to collect vaginal smears during the cycle.

Like before, the poor rodents were placed in a small, water-filled container and forced to try and swim their way out, but Kokras et al. decided to do things a little differently. On the first day, the rats were forced to swim for 15 minutes before receiving increasing doses of sertraline several hours later. Subsequent sessions were held for 5-minute each, and the rats’ attempts at escaping and other movements (i.e., climbing, swimming), as well as immobility, were monitored.

Now for the results:

As far as the estrous cycle is concerned, it was shown to have negated the response to sertraline since female rats exhibited similar responses to the male rats during both of the FST sessions; it might be because of the mild doses they received instead of being chronically medicated.

In conclusion, there are sex differences in how stress and anxiety are displayed between genders. One of the most important takeaways from this study, especially where female subjects are concerned, is that it would be a good idea to include female rats from all phases of estrous cycle. When comparing sex differences in antidepressant responses and the doses given, it would also be wise to consider that both sexes may not be responsive to the same amount as the other.

Traumatic Brain Injury: What Maze Studies can Teach Us about It

Traumatic Brain Injury: What Maze Studies can Teach Us about It