Schizophrenia is a mental disorder that affects 23 million people worldwide. The key features of schizophrenia include distortions in: sense of self, behavior, emotions, thinking, and perception. To date, research has been unable to identify a single factor causing schizophrenia.[1]

Mazes are useful for assessing cognition in schizophrenic patients. Cognition is not an easy thing to measure because there are so many aspects and processes intertwined.

Mazes offer an efficient and focused strategy for testing and measuring the many aspects of cognition. The cognitive skills which are most likely to be compromised in schizophrenic patients can be quantified through several maze solving tasks which are easy to administer.

The brain carries on many complex cognitive tasks during daily life, like planning, decision making, reasoning, and problem-solving. Collectively, these tasks are referred to as executive function. In schizophrenic patients, this collection of cognitive skills is weakened, leading to the disruption of daily activities and disorganized thinking.

In this article, we will take a look at what hand-drawn or two-dimensional maze-solving tasks have taught us about cognition in schizophrenic patients.

We will introduce the different types of mazes that are commonly used in research practice for assessing cognition in schizophrenia. Throughout the article, we will see what maze-solving has shown us about the characteristics of schizophrenia. Towards the end of the article, we will also take a special look at how maze-solving tasks have been used in clinical trials. Then, we will conclude by discussing the new directions happening in the realm of maze solving for conducting cognitive assessment in schizophrenic patients.

As promised, we will begin this article by introducing the hand-drawn or two-dimensional mazes that are used for testing the neuropsychology of schizophrenic patients.

The Porteus Maze is frequently used for assessing the cognitive abilities of schizophrenic patients. In order to perform well on the Porteus Maze, it is necessary to have: visuomotor coordination, perceptual organization, foresight and planning, as well as coordination and speed. All of these cognitive abilities are potentially compromised by schizophrenia.

When completing the Porteus Maze, participants are expected to trace and complete a maze without crossing the maze lines, backtracking or going over the same path twice, or entering a dead-end or ‘blind alley’. If these requirements are at any point violated, the participants are given a new copy of the same maze to complete but for a reduced score.

The participants are expected to complete a certain number of mazes, all of which increase in difficulty as the test progresses.

Scoring and Measurements from the Porteus Maze

Maze difficulty is determined by the typical number of failed attempts encountered while completing that maze. The final measurement acquired is the total number of trials needed in order to complete the particular maze. Cognitive efficiency is also measured but by the number of seconds it takes to complete the task.

In the Porteus Maze, scores are calculated by adding up all the errors that have been performed. Errors include: touching lines of the maze, lifting the finger/pin, or cutting corners. Also, the time that it takes to complete the test is taken into account.[2]

A mental age is calculated as the main outcome of the participant’s performance. The ‘mental age’ is calculated by using two pre-established standard procedures for calculating the: test quota (TQ) and qualitative (Q) score.[3]

The Porteus Maze Can Measure Impulsivity

The Porteus Maze test was originally developed to measure intelligence. However, a few studies have also used it as a proxy of measuring impulsiveness, given the likelihood that intelligence and impulsivity are differentiated from each other. Using the Q score, it is possible to obtain a measure indicative of impulse control which can be used to distinguish different groups with regards to their impulsivity.[4]

Below is an example of how the Porteus Maze test is administered in schizophrenic patients and what it can reveal about their cognitive abilities.

In an experiment by Lis et al., 25 schizophrenic patients who were treated with atypical antipsychotic agents were matched to 25 healthy controls based on education, age, and sex.

The participants were expected to solve a series of mazes on a computer. (Increasingly, cognitive research using the Porteus Maze is using an electronic adaptation of it that can be completed on the computer, instead of using the traditional paper and pencil approach.)

There were two experimental conditions:

The results revealed that: 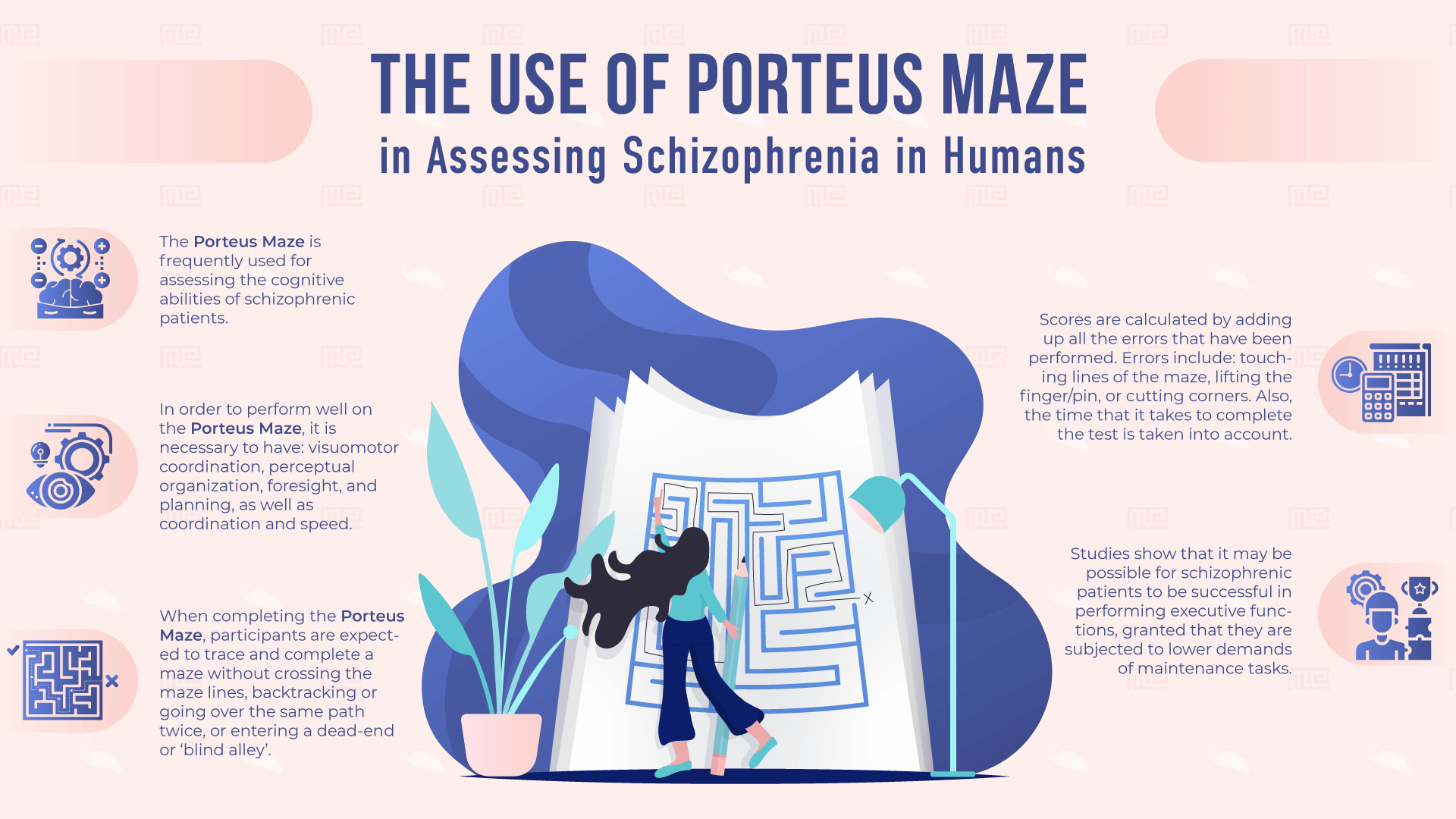 The Neuropsychological Assessment Battery (NAB) is a collection of tests that measure different types of higher cognition including executive functions, language, and spatial abilities using multiple modules. The NAB Maze Tests have been traditionally administered as one of the tests in the NAB Executive Functions Module.[6]

NAB Maze Tests are currently available as independent assessments, too.[7][8] Thus, researchers are now able to only use NAB Maze Tests for assessing executive functions, if they want to, instead of having to administer the entire NAB.

NAB Mazes and the MATRICS MCCB

NAB Mazes, as mentioned previously, traditionally are a part of a neuropsychological test battery. Recently, the NAB Mazes have been included in a different test battery developed by the Measurement and Treatment Research to Improve Cognition in Schizophrenia (MATRICS) Project. The battery developed by the MATRICS project is called the MATRICS Consensus Cognitive Battery (MCCB)  to assess cognition in schizophrenic patients.[9]

The MCCB is a collection of tests carefully selected to test cognition specifically in schizophrenic patients. Domains that the MCCB covers include: verbal learning, processing speed, visual learning, social cognition, working memory, attention/vigilance, and problem-solving/reasoning. NAB Mazes are used to quantify the problem-solving and reasoning domain.[10]

The MCCB has been approved by the Food & Drug Administration (FDA) for use in clinical trials to assess cognitive improvement in schizophrenic patients.

Below is a summary of findings that have been established as a result of using the NAB Mazes portion of the MCCB: 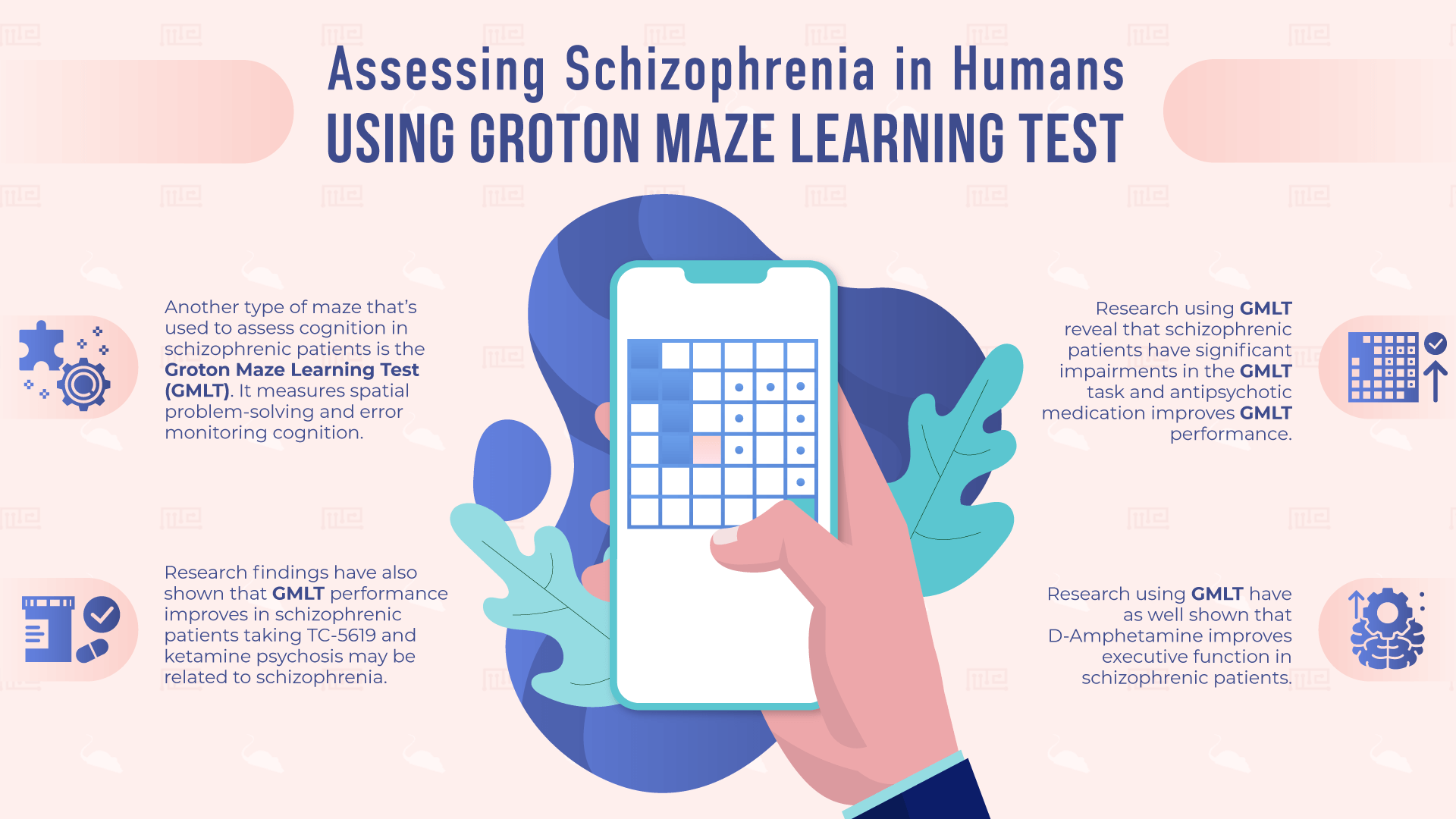 Another type of maze that’s used to assess cognition in schizophrenic patients is the Groton Maze Learning Test (GMLT). The GMLT measures spatial problem-solving and error monitoring cognition. This maze is a computerized form of the Milner Stylus and the Austin Maze.

The GMLT is commonly used as a part of an early phase battery by major global pharmaceutical companies and academic researchers when investigating the potential of new nutraceutical or pharmaceutical compounds in phase I studies on improving schizophrenic symptoms.[15]

The GMLT task essentially involves finding and navigating through a hidden maze. Such a task requires many cognitive processes, in order to be completed successfully, including:

In order to complete the maze successfully, individuals must employ trial and error learning. These are the features of the GMLT procedure:

The participants are given a set of rules to adhere to when completing this task:

In the next sections, we will see how the GMLT is involved in research with schizophrenic patients.

The CogState schizophrenia battery is a collection of tests that can assess all of the cognitive domains as suggested by the MATRICS group.[17] This battery is frequently seen in research with schizophrenic patients and is used as an alternative to the MCCB battery (mentioned previously).

The CogState has been used by a number of leading pharmaceutical companies, including GlaxoSmithKline, Abbott, Bristol-Myers Squibb, Johnson & Johnson, and Pfizer Inc.[15]

One of the classic forms of intelligence tests for adults is the Wechsler Adult Intelligence Scale (WAIS). The equivalent test that is given to children specifically is the Wechsler Intelligence Scale for Children (WISC) of which the WISC-R and WISC-III are two modified versions published in 1974 and 1991, respectively. However, a subscale of the WISC-R and WISC-III, the WISC-R Mazes Test, is given to adults as a supplementary cognitive assessment since the traditional WAIS does not feature a maze test.[21]

The WISC-R and WISC-III Mazes have been around for a few decades, thus they are more likely than NAB Mazes to be used in international research since there are multilingual translations of the test available.

Mazes are an efficient way to measure cognition in schizophrenic patients. Increasingly, new mazes and variations are developing in order to have even more methods that can assess different aspects of cognition.

For example, a study by Bertholet et al. adapted the traditional Radial Arm Maze as it is used in rodents in order to be suitable for humans. Their modifications led to four different versions of the maze:

These mazes employ distal and local relational cues and can measure spatial short-term and long-term memory.

Such a variety of mazes and scale, from small to life-size, allow for flexibility to accommodate different participants and research hypotheses.[25]

Schizophrenia is an ailment that places a heavy burden on the individual (and also the economy).[26] In fact, experts and researchers recommend therapeutic solutions to move in the direction of cognitive functioning improvement, not just symptom management.[26]

In the development of effective therapies, pharmaceutical, and nutraceutical solutions, maze solving tasks play a key role. With maze solving tasks, it is possible to measure and quantify several subtle aspects of cognition pre- and post-intervention.

In this article, we covered the top mazes used in assessing executive and cognitive function in schizophrenia, but there will be more mazes developed for this purpose in the future.

Ana Zdravic
Ana Zdravic earned her BSc in Psychology from the University of Houston while minoring in creative writing. She is currently in Europe pursuing her master’s degree in cognitive science and is thinking about going for a doctorate. Her research interests include stress, nutrition, exercise, creativity, and quality of life.
×

Ana Zdravic
Ana Zdravic earned her BSc in Psychology from the University of Houston while minoring in creative writing. She is currently in Europe pursuing her master’s degree in cognitive science and is thinking about going for a doctorate. Her research interests include stress, nutrition, exercise, creativity, and quality of life.
Next Post