Mazes have formed a part of human culture for thousands of years. As well as serving as a decorative feature and a source of entertainment, mazes have also found a place in psychological and neurological research. The reliance of maze-solving on key cognitive skills, as well as its association with important brain regions, has allowed mazes to serve as a tool for assessing cognitive ability.

In this article, we will discuss a particular kind of maze known as a “hierarchical maze”. We will then go on to explore a variety of hierarchical mazes that have been designed and employed by researchers, and examine how these mazes can prove useful in assessing different conditions.

What are Hierarchical Mazes?

Mazes can vary greatly along numerous dimensions, such as their intricacy, size, purpose, and perspective. In a paper published in 2016, psychologist Tomasz Pasek attempts to create a taxonomy of mazes;[1] he argues that mazes can be classified in several different ways, one of which involves dividing them between “hierarchical” and “non-hierarchical”.

According to this schema, a hierarchical maze is one in which the navigator encounters a limited (but non-zero) number of intersections where they must make an important decision about where to go next. They may encounter multiple dead-ends along their route. In contrast, non-hierarchical mazes require the navigator to either make only a single choice at a single intersection throughout the whole maze or allow for an unlimited number of choices.

Non-hierarchical mazes include extremely simple mazes such as the T-maze used in murine behavioral research, which only has a single intersection, as well as extremely open structures such as the Morris water maze in which the navigator has to get from one point to another in a large space without encountering any turns or dead-ends. Hierarchical mazes include all other kinds of maze, and most of the mazes we typically encounter are of the hierarchical type.

Solving a maze is a complex task which makes use of a number of key cognitive skills: most notably reasoning, decision making, spatial memory and navigation, working memory and planning. As a result, mazes can be used as a tool to assess cognitive aptitude, either in healthy individuals or in the diagnosis of neurological and psychological conditions. 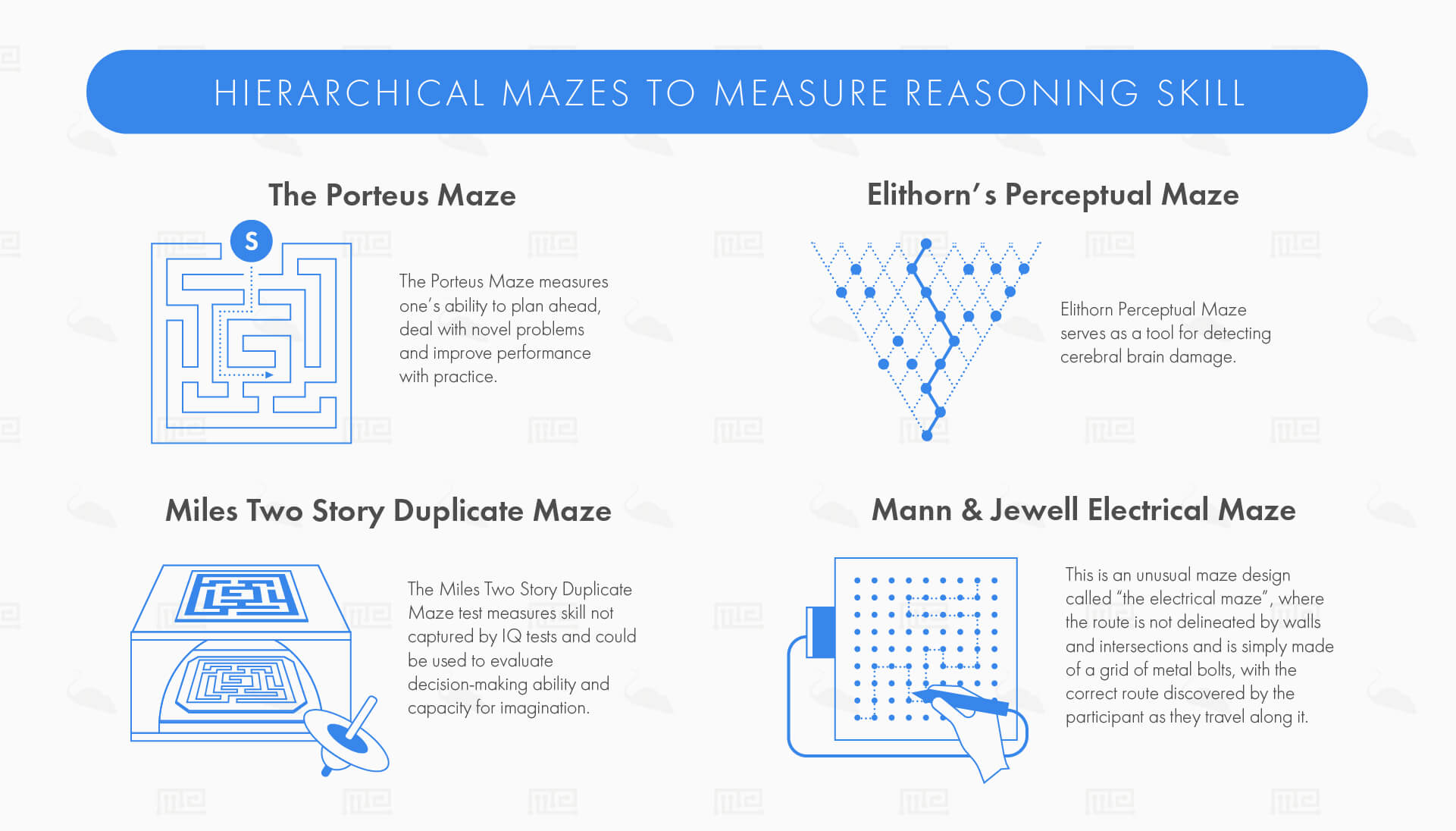 One of the first examples of a hierarchical maze used in psychological research is the Porteus Maze Test, developed by Stanley Porteus at the beginning of the 20th century. Porteus intended the test as a supplement to the widely used Stanford-Binet test of general intelligence, believing that mazes could help measure cognitive attributes not captured by Stanford-Binet.[2]

The participant takes an “allocentric” perspective (seeing the mazes from above, as opposed to an “egocentric” perspective experienced when inside the mazes). They are required to solve mazes of increasing difficulty using pen and paper, and then their performance is evaluated by qualitatively (according to how well they follow instructions) and quantitatively (their “test age”). Higher scores indicate worse performance.

The Porteus Maze measures one’s ability to plan ahead, deal with novel problems and improve performance with practice. It has been shown to function as a diagnostic tool for conditions involving deficits in executive function such as delinquency, schizophrenia, anxiety disorders, dementia, and traumatic brain injury. It is a robust tool but is underutilized in contemporary research.

The Elithorn perceptual Maze Test also presents an allocentric perspective to the testee but is otherwise very different in design. In this test, the mazes consist of a pattern of criss-crossing straight lines resembling a chain-link fence. At some of the line intersections, there are large black dots, and the participant must draw a route from one end of the maze to the other in a way that connects as many dots as possible.[1]

Points are awarded for solving the mazes and also for solving them promptly (in under 30 seconds). Elithorn administered the test[3] to control patients and patients with cerebral lesions, showing that the lesioned patients performed on average much worse and that lesions in the right hemisphere appeared to affect performance more than those in the left hemisphere.

Elithorn thus puts the test forward as a tool for detecting cerebral brain damage. However, given the imprecise and non-comprehensive nature of how the test’s diagnostic accuracy has been evaluated, it is difficult to have much confidence in its usefulness in its respect.

The Miles Two Story Duplicate Maze has a much more cognitively demanding design than the other allocentric mazes used to evaluate reasoning capability. The subject is given a maze which is a rotated or mirror image version of the one that they are required to solve. Navigation thus requires a more convoluted reasoning process in which the subject has to imagine how the maze they can see maps onto the one they cannot.[4]

Hence, the Miles Two Story Duplicate Maze could be used to evaluate not just problem solving and decision-making ability (executive function, as with the previous two mazes) but also the capacity for imagination. One study finds that the ability to solve this kind of maze does not correlate highly with general intelligence, suggesting the test measures skill not captured by IQ tests.[5]

The Barker maze is somewhat different: the subject is shown the maze at the beginning of the test before being blindfolded. The maze is set in a wooden board and can be felt with the tip of one’s finger, allowing the subject to trace the correct route by hand. Since they are blindfolded, they must rely on their sense of touch and initial memory of the maze’s layout in order to solve it.

The Barker maze then depends not only on executive function and vision but also on memory and tactile abilities, and subsequently on the solver being able to integrate the information from different sensory modalities into a coherent whole.

Mann and Jewell presented an unusual maze design that they call “the electrical maze”, where the route is not delineated by walls and intersections. Instead, the apparatus is simply made of a grid of metal bolts, with the correct route discovered by the participant as they travel along it.

The participant touches the bolts with a stylus, and moves one bolt at a time (from one bolt to another) in any direction they choose. A light comes on when they choose to move to the next correct bolt in the route. If the light does not come on, they must return to the previous bolt and choose a different direction. Experimenters measure the number of errors as well as the time taken to make moves.[7]

The Austin Maze is similar to the electric maze except it uses buttons instead of bolts. Button-pressing is a much more intuitive activity. The participant moves from one button to another in whichever direction they wish. A green light comes on to indicate a correct move, or a red light comes on accompanied by a buzzing sound to indicate a wrong move.[8]

Performance in this maze test can be quantified based on three variables: how many trials the person needs to learn the route (i.e. complete it with zero errors), the amount of time they take to finish and to what extent they can reduce the number of trials they need to learn any given maze. The Austin maze was digitized in the late 1980s by Morrison and Gates.[9]

It has been shown that performance in the Austin Maze depends on visuo-spatial skills but not on the quality of a participant’s working memory. This allows the maze to be used as a diagnostic tool for visuo-spatial deficits, e.g. those resulting from brain damage.

A computerized maze solved from an egocentric perspective was presented by Elizabeth Hampson and colleagues in 1998. The computer program is designed to simulate the experience of being in a real-life maze: the participant can see virtual walls on the screen and must decide which direction to go at each intersection by pressing the keyboard arrow keys.

The creators argue that this maze has “greater ecological and comparative validity” than maze tests relying on pen and paper.[10] In the same paper, they also report that male participants solved the maze significantly faster than females, perhaps reflecting sex differences in navigational ability (although this may be confounded by visual ability).

Carelli and colleagues conducted a study in 2011 where they compared participants’’ performance solving a very similar egocentric virtual maze to Hampson’s with their performance solving more traditional pen-and-paper allocentric mazes. They found that age-related cognitive decline significantly reduced performance in the virtual maze, and this was not confounded by age-related motor deficits or inexperience with a computer.[11]

A paper by Wallet and colleagues discusses an experiment in which they examined the relationship between solving a real-life maze and solving a simulation of that same maze on a computer.[12] Participants who had trained in the virtual maze performed significantly better in the real-life maze than a control group who had simply looked at pictures of the maze. The authors suggest this is due to the simulation activating parts of the brain involved with real-life spatial navigation.

Caplan presents a virtual maze in which the point of view of the participants is much more restricted than in the virtual maze detailed above. The maze consists of a series of T junctions, and the participant can only see the junctions one at a time. During the first attempt, the correct direction to turn at each junction is indicated by an arrow, which is not present on subsequent attempts.[13]

A virtual maze with a similarly restrictive viewpoint but a very different testing procedure is presented by Wiener. In Wiener’s maze, each intersection is marked with a particular object (such as a jar or candle). Participants do not make navigational decisions but instead, are transported through the maze in a predetermined route, and then asked to figure out the route based on their memory of the landmark objects from previous trials.

Wiener designed this maze in order to evaluate the effects of aging on the ability to retrace a previously trodden route (as opposed to solving a new route). Older participants showed deficits both in learning routes and in being able to retrace them. Wiener’s test may be useful in disentangling the measurement of spatial memory from the measurement of general navigational ability.[14]

Throughout the last century, psychologists and neurologists have developed and made use of a large variety of hierarchical mazes. These mazes allow for the assessment of cognitive ability in healthy individuals as well as serving as a diagnostic tool for a range of conditions. It is hoped that this article will allow researchers with an interest in using hierarchical mazes to choose the maze test most suitable for their particular research endeavor.