Animal handling prior to behavioral experimentation is a crucial consideration for all researchers. However, there are many factors which one must consider when deciding whether or not to habituate their animals to experimenter handling. Of important consideration are the characteristics of the animal including murine type (mouse or rat), strain, and the age of the animal.

For pre-experimentation handling, researchers must remove the mouse or rat from its cage and either simply hold, or alternatively, stroke the animal for a duration of no less than one minute at least once per day for one week prior to behavioral assays. Neonate handling follows a similar time-course, however, the animals should be removed from the cage and placed in a similarly sized area for the duration rather than be held throughout. Of importance is that handling should be done gently and not with forceful restraining. Animal restraint results in inverse outcomes to the above handling procedure and therefore negatively influences behavioral performance, especially in tasks involving exploration, socialization, and memory.

Under most circumstances, habituation to experimenter handling imbues progressive improvements in animal behavior which increase with the duration of this procedure. The most notable differences seen in handled vs. non-handled rodents relate to reductions in stress and anxiety. This reduction translates to more exploratory behavior and less inhibition in choice-making tasks and social interactions.

While pre-experimentation handling consistently results in behavioral adaptation amongst rodents, the effects of this handling are variable based on the age, sex and strain of the animal. As such, these factors are important for researchers to consider when deciding to habituate their animals to experimenter handling and also when interpreting the results of their experiments. 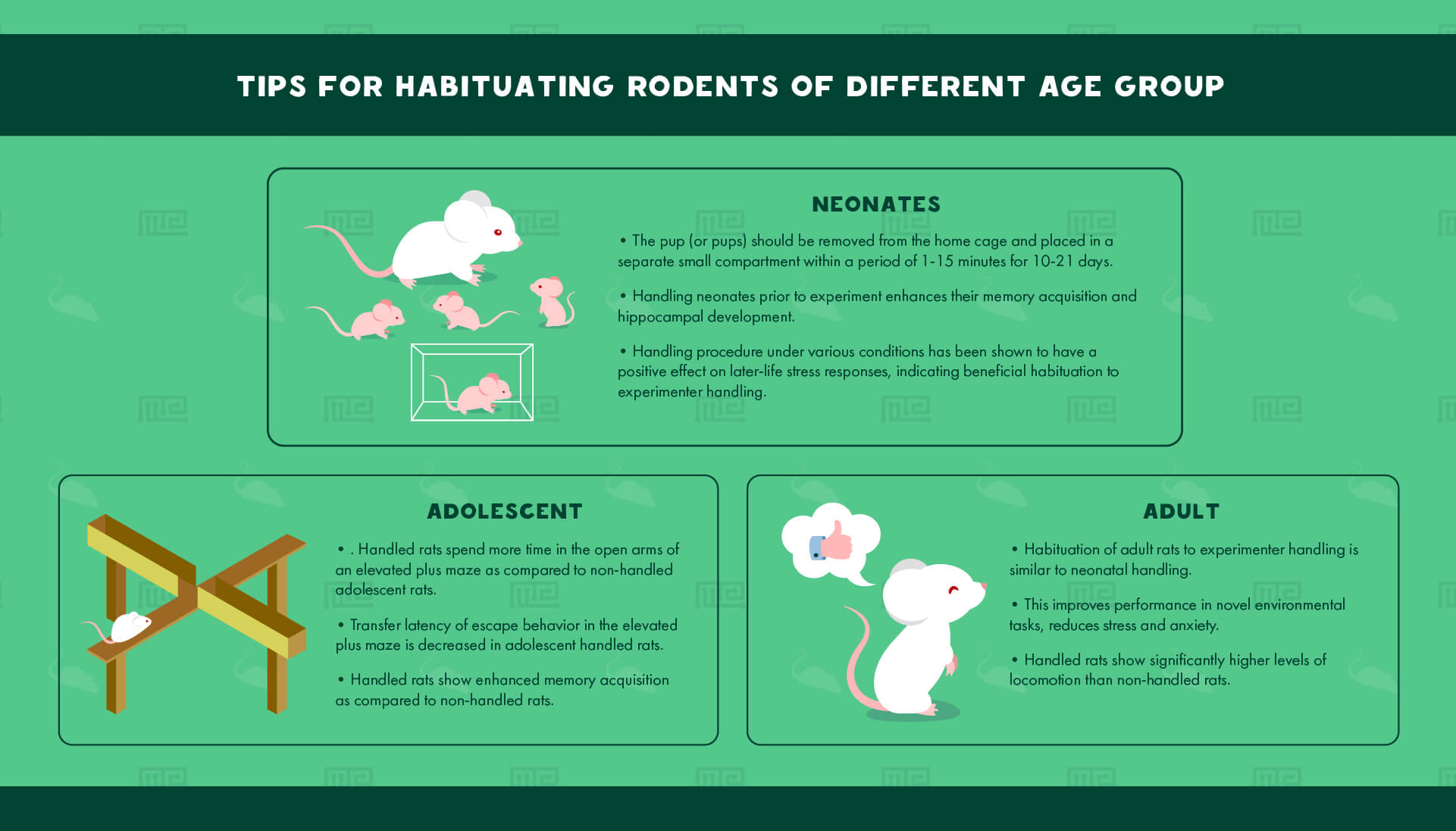 Handling of neonatal rodents has been shown to induce an adaptive response to stress, as exhibited by reduced stress responses later in life. The protocol for neonatal handling is simply to remove the pup (or pups) from the home cage and place them in a separate small compartment. Variations on the procedure include:

This handling procedure under various conditions has been shown to have a positive effect on later-life stress responses, indicating beneficial habituation to experimenter handling. This impact has been suggested as the result of hippocampal cell density. The hippocampus negatively regulates the HPA-axis, which is responsible for the biochemical stress response. Therefore, enhanced hippocampal development induced by handling has a consequently inhibitory effect on the stress response. Additional data suggest that increases in amygdala benzodiazepine receptor density, coupled with decreased levels of noradrenaline, serotonin, and dopamine also contribute to this increased resilience to stress.[1]

Despite these benefits of neonatal handling, there are potential downsides to this practice. Rats handled as neonates show impaired aversive learning/memory later in life. Specifically, the expression and extinction of both cue- and context-induced fear response memories are significantly inhibited in rats which have been handled during early life.[1] Additionally, rat handling during this period decreases social approach behaviors in adulthood and increases aggressive behavior in a social environment.[2] These impacts on learning and memory, as well as on social behavior, indicate that neonatal handling may not be ideal for researchers performing tasks concerned with these cognitive domains.

Habituation of adult rats to experimenter handling, similarly to neonatal handling, reduces stress and anxiety and therefore may improve performance in novel environmental tasks. Across multiple strains of rat, handling has been shown to increase time spent in the center of an open field task, indicating reduced anxiogenic responding to the novel environment. Similarly, when presented with a hiding compartment to which rats recess when experiencing stress, handled rats exhibited fewer entries and less overall hidden time when they were handled by experimenters prior to testing.[4]

In addition to decreased anxiety-like behaviors, handled rats exhibit increased responding to some stimulation protocols. When given the psychomotor stimulant cocaine, for example, handled rats show significantly higher levels of locomotion than non-handled rats given the same drug.[5] These data may similarly be the consequence of reduced stress and therefore less inhibitory behavioral influence in environmental exploration. Therefore, handling of adult rats prior to behavioral testing will likely improve performance in a variety of tasks involving environmental novelty and risk-taking behavior.

Significant differences between the outcome of handling in male versus female rats represent an important consideration for researchers using animals of both sexes. For instance, habituating animals to experimenter handling prior to a forced swim test (FST; an indicator of depression or helplessness in murine models) decreases immobility and therefore indicates reduced levels of stress and depression in both sexes. However, stress adaptation to chronic stressors (such as repeated FTS exposure) is enhanced in handled males and decreased in handled females.[6] Similarly, in the morris water maze, handled male rats exhibit faster acquisition, indicating elevated stress-induced memory responding. This effect is not found in handled female rats.[7] Conversely, handled female rats exhibit improved learning and reversal learning in the Y-maze task, while handling of male rats imbues the opposite effect.[8]

Additionally, the expression of some genes whose regulation has been tied to key behavioral disorders such as Fragile X mental retardation shows similar sexually-differentiated regulation by handling. For example, expression of the Reelin gene in the hippocampus is persistently downregulated by handling in male rats, but not females.[9] This alteration may have profound consequences on exploratory and social behavior, as are found in disease models which similarly regulate Reelin expression. For instance, exploratory and investigative behaviors are more pronounced in handled female, but not male rats.[10]

Therefore, sex differences in handling outcomes are an important consideration for the interpretation of behavioral results in handled rats.

Differences in the effects of habituation to experimenter handling have been noted between different strains of murine mammals within the same species. These differences must be taken into consideration when electing to perform pre-test handling and determining the best method for doing so.

Two of the most widely used strains of laboratory rats, the inbred Lewis strain and the outbred Sprague Dawley strain, exhibit substantial differences in their response to experimenter handling. Standard protocols of 1-2 minutes of handling, three times per day for either a short period (one week) or a long period (two weeks), progressively decrease levels of stress hormones in Sprague Dawley, but not Lewis rats.[11] Decreased levels of these hormones are correlated with improved performance in many behavioral tasks, including open field exploration and elevated plus mazes.

Indeed, experiments examining the effects of habituation to experimenter handling between Sprague Dawley and another commonly used strain of laboratory rat (PVG) found increased exploratory behavior in the elevated plus maze only in pre-handled Sprague Dawley rats. Experimenter handling of the PVG rats prior to testing was found to have no influence on the behavioral performance.[12] Therefore, researchers intending to perform experiments which are influenced by states of stress and anxiety may see improved performance in Sprague Dawley rats with prolonged pre-experimentation handling which is not seen with Lewis rats.

Similar differences have been noted amongst commonly used strains of laboratory mice. Specifically, C57BL/6J and A/J have been tested under comparison protocols for responding to neonatal handling with regards to both pup behavior and maternal behavior.[13] Handling of C57BL/6J was found to progressively alter pup ultrasonic vocalizations, an early indicator of stress development. Conversely, A/J pups showed no change in this behavior following experimenter handling. Additionally, increases in body temperature which signal pup anxiety decrease over repeated handling in C57BL/6J pups over repeated handling while no such adaptation occurred in A/J pups. Dams of either strain showed increased nursing and grooming behaviors following experimenter handling, which adversely impacts sociobehavioral development in pops. Together, these findings suggest that experimenters using C57BL/6J will likely see positive behavioral adaptations with repeated pre-test handling of neonates but not handling of dams, while those using A/J mice may potentially see detrimental effects of maternal handling or see no benefit from neonatal handling alone.

Clearly, habituation to experimenter handling has the potential to improve behavioral performance by rodents when performed prior to experimentation. Important considerations for researchers when electing to perform pre-experimentation handling include the age, sex, and strain of the animal, with outcomes varying based on all of these factors. Crucially, because handling does significantly impact behavior, this procedure must be performed consistently across all animals used in a given experiment. Finally, if using multiple strains of a mouse or rat (for example, when using a transgenic inbred mouse compared with an outbred strain), extra care must be taken in interpreting the results given that different strains respond differently with regards to habituation to experimenter handling.

How should I habituate animals to the testing apparatus?

How should I habituate animals to the testing apparatus?