Depression is an important disorder to study, especially in today’s society. It is chronic, life-threatening, and affects up to 20% of the world’s population[1]. Depression has a variety of symptoms, but the common ones are depressed mood, diminished interest in activities, changes in appetite and sleep, fatigue, feelings of worthlessness, and suicidal ideation[2]. Animal models are crucial for studying the causes and effects of depression as well as antidepressant drugs. One of these models is the learned helplessness paradigm.

What is Learned Helplessness?

Learned helplessness is a behavior in response to an uncontrollable and aversive stress. In this situation, animals will experience a deficit in emotional expression, associative learning, and behavioral coping. In other words, in response to this kind of stress, animals will essentially “give up” on trying to escape due to a sense of powerlessness.

Learned helplessness is believed to be one of the contributing causes to depression. This model produces responses similar to the symptoms of depression and is a reliable test[3]. While this model has been applied to a variety of animals, our focus is going to be on mice.

So now that we know what learned helplessness is, how do we achieve it? The equipment used to induce learned helplessness consists of a shock generator. The box-shaped chamber used to condition the animal has a floor with steel rods to conduct the shock, as well as an escape method. This escape method can be a second chamber to allow the animal to physically escape the shocks.

The protocol has three phases: induction of depressive-like symptoms, recovery, and the test phase. In the first phase, the animals are exposed to a shock procedure for a certain number of days. During this phase, there will only be an escape method present for the control animals receiving shock, and not for those who are in the learned helplessness group. The shocks are usually randomized to mimic chronic symptoms, and the session can last around 45 minutes to an hour, depending on the lab and the effect being tested. After the first phase, the animals are allowed to recover for 24 hours. During the test phase, the escape method should be installed into the chamber for both sets of animals, and they are presented with shocks again.

Here, the control group will have learned to press the lever or escape into the no-shock chamber. The experimental group will just accept the shocks, even though there is an escape method present.

How to Look at the Data

During the test phase, it is common to look at the escape latency, or how long it takes for the animal to escape the aversive shocks. The escape latency is going to be much higher in the case of the learned helplessness group of animals.

The benefits of this kind of test is the ability to assess the effects of antidepressants or other treatments for depression. For example, fluoxetine, a Selective Serotonin Reuptake Inhibitor (SSRI) more commonly known as Prozac and Sarafem, has been shown to reduce depressive-like symptoms induced during the learned helplessness test[4]. If an antidepressant works, then it should reduce the latency to escape. 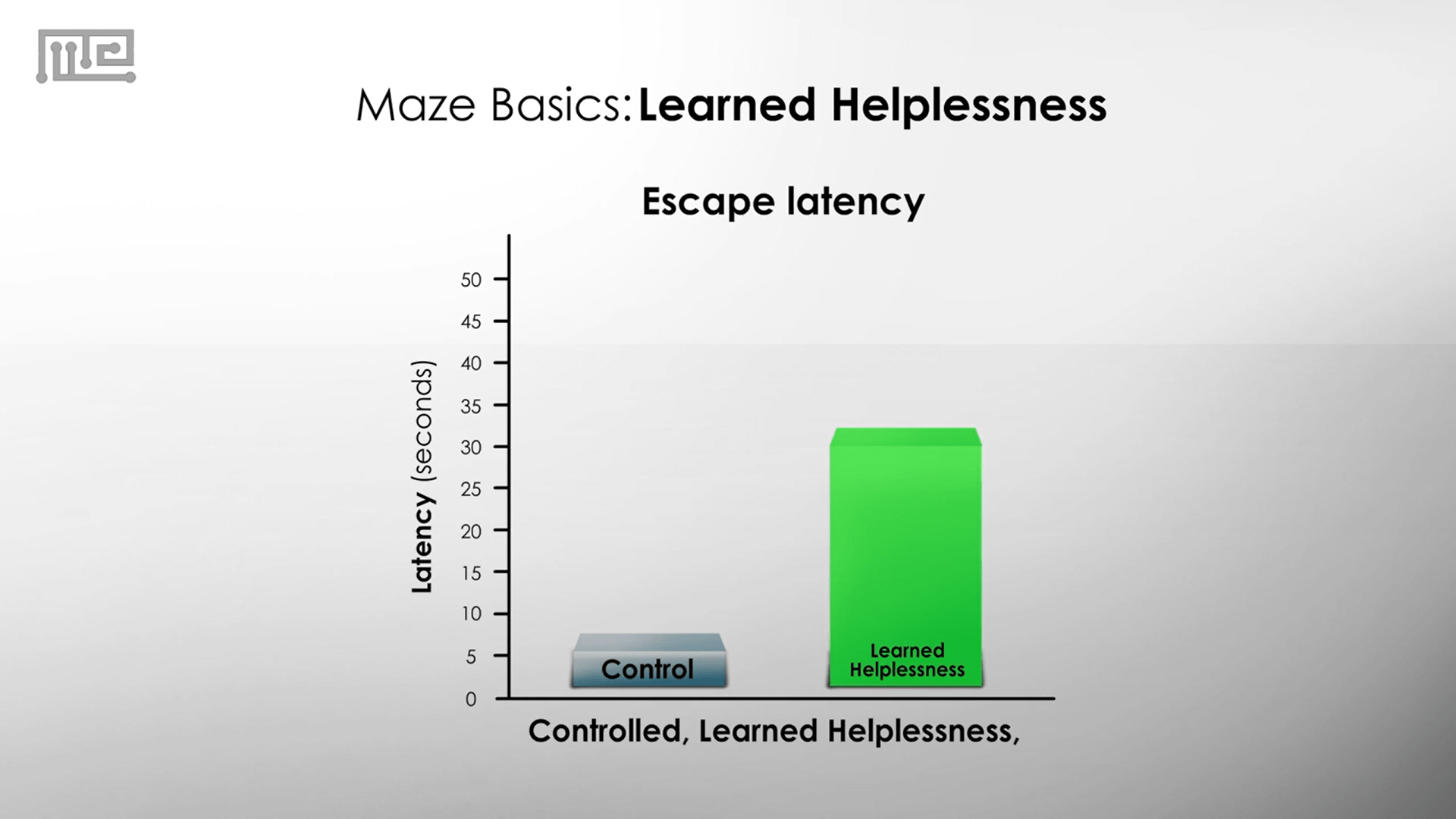 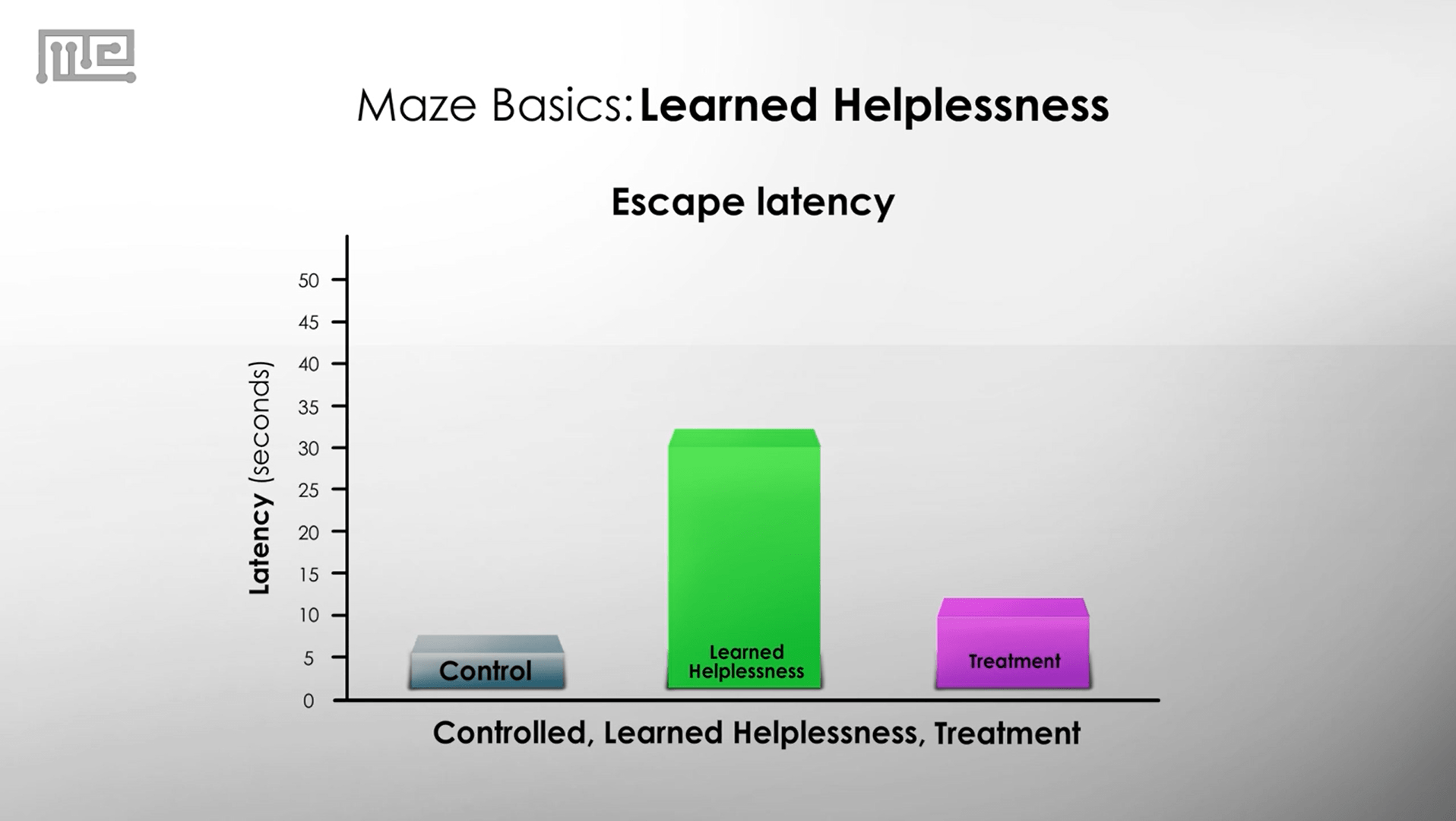 While there’s been a controversy over the exact role of serotonin in depression, the effects of SSRI’s in both learned helplessness studies and in human treatments suggest that SSRI’s can reduce depressive symptoms.

Other Models of Depression

There are quite a few rodent models of depression out there, including the forced swim test and tail suspension. So what’s the difference?

The forced swim test places mice in an inescapable tank filled with water. Mice that have learned helplessness will be immobile, doing the bare minimum to keep themselves from drowning[5]. The tail suspension test suspends mice to a clamp by their tails such that they cannot reach anything. After some time, they will stop struggling, and will just hang immobile.

Compared to the forced swim test, the learned helplessness test has been shown to have sensitivity to drugs with a greater variety of antidepressant properties[6]. One study has questioned the tail suspension as a model for testing antidepressants due to the question of whether this immobility is really measuring depression[7].

However, the learned helplessness test isn’t without its own limitations. The major limitation with this model, as well as the tail suspension test, is the fact that the depressive effects are pretty short-term. Not long after the shock protocol, the learned helplessness feeling wears off. In addition, protocols and strains of mice differ across labs, producing somewhat variable results across studies.

Despite its limitations, the learned helplessness test is one of the most widely used models to study depression and potential antidepressants. As we’re focusing more and more attention on treatments and medications for depression, this model is becoming all-important to this field of research.