By Seyed AhmadAugust 28, 2017No Comments

Intrinsic neuronal fibers run up and down, side to side in the human body; biochemical highways which carry information that basically give meaning to the word alive. Damage to these highways result in catastrophic outcomes. One such outcome may lead to the development of multiple sclerosis, a progressively degenerative, autoimmune neurological disorder characterized by demyelination of the central nervous system (CNS) [1]. The demyelination progressively leads to somatic and behavioral deficits, such as poor motor function, coordination, and fatigue

The etiology of the disease is uncertain, yet a combination of genetic and non-genetic factors, such as virus infection and metabolism, seem to be the major players in inducing repetitive damage to the CNS, leading to multiple sclerosis [2]. Despite the unknown nature of the disorder, researchers are able to replicate and induce multiple sclerosis-like symptoms using mice models, a hallmark in advancing knowledge about the disease in humans.

There are several ways in which multiple sclerosis mouse models can be developed. Here, we look at two methods:

Both these models stem from a common cause; infiltration of the CNS, which ultimately leads to demyelinating disease [3]. The models aim at replicating human multiple sclerosis by inducing neurophysiological changes that trigger mechanism seen in human patients; triggers such as inflammation, demyelination, and progressive neurodegenerative deficits.

TMEV-IDD is a multiple sclerosis mouse model that closely parallels human multiple sclerosis. The virus, which is neurotropic and single-stranded, constantly and continually infects the murine central nervous system [4], establishing symptoms of demyelination and inflammation, which closely resemble multiple sclerosis in human patients. The course of TMEV-IDD can be either acute, displaying subclinical encephalitis, or chronic, which consists of chronic axonal damage, inflammation, and demyelination. The induction of the virus can be done through two different types of strains;

The virus works by infecting macrophages, microglia, and other neurons in the CNS, causing the body’s own immune system to respond to the attack. 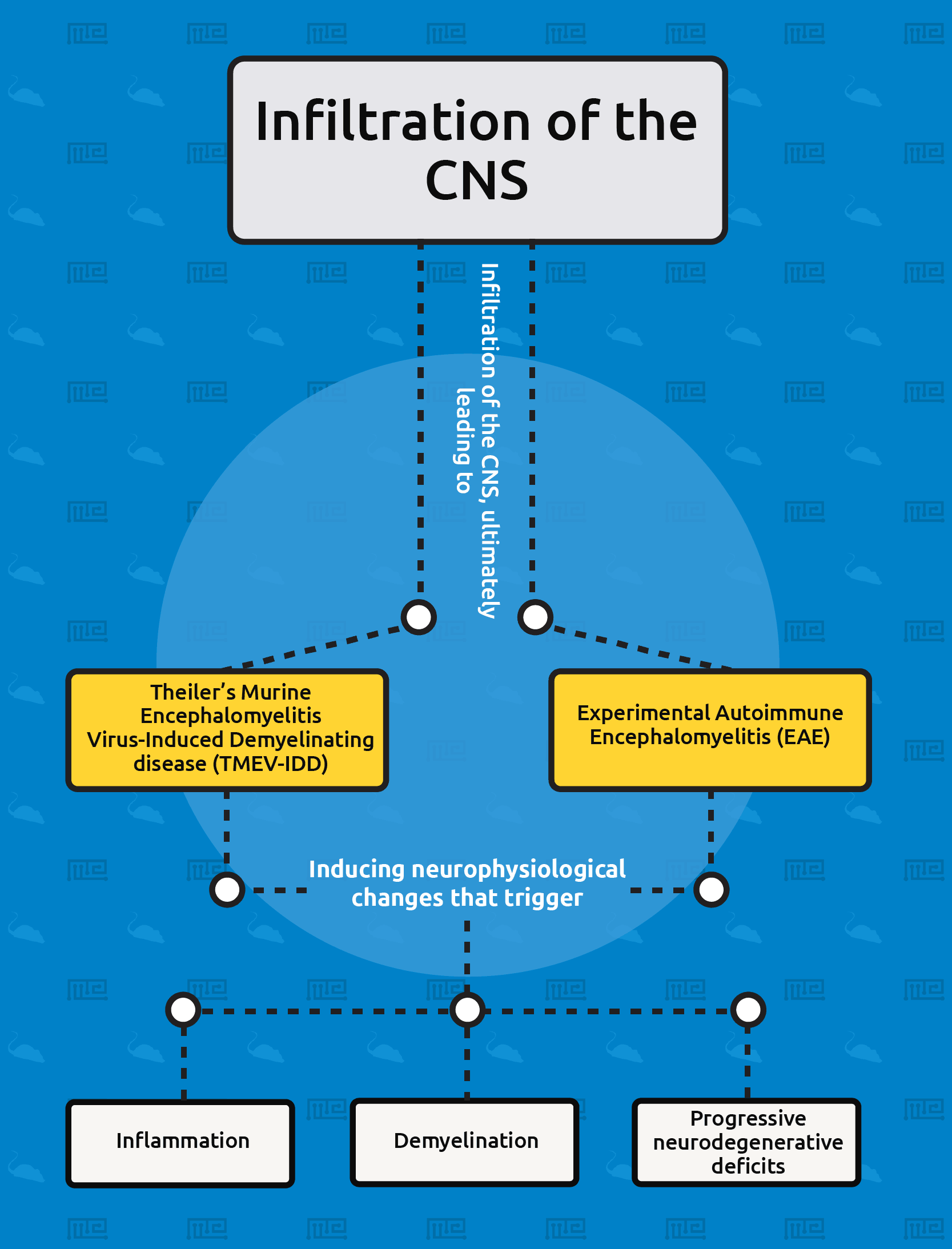 As the disease progresses, the response of the immune system becomes an autoimmune repose, triggering the symptoms of inflammation and demyelination. This progression characteristic is one of the most important aspects of multiple sclerosis, making this model a top choice for pre-clinical findings. In effect, a model that is able to replicate human disease has the potential to enhance better therapeutic measures for future treatment, and the TMEV-IDD model shows promise.

EAE, like its counterpart above, also provides a basis as a multiple sclerosis animal model. Facilitated by infiltration of T cells, macrophages, and B cells into the CNS, EAE presents with demyelinating lesions of white matter within and around the central nervous system, a finding that strongly resembles multiple sclerosis in humans [3]. Furthermore, the EAE model can be induced via two methods, active induction and passive induction.

The mechanism of active induction starts by immunization of mice with myelin antigens. SJL/J and C57BL/6 are mice that are susceptible to disease induction. The induction of the disease in susceptible mice involves several agents such as proteolipid protein (PLP), myelin oligodendrocyte glycoprotein (MOG), and myelin basic protein (MBP). This sets off a cascade of events that triggers step-by-step processes that lead to the induction of disease. Along with the peptide, a solution of Mycobacterium tuberculosis is given to enhance the pro-inflammatory response. The activation ends with cell-specific inflammatory response of the immune system in the CNS, causing damage to myelinated axons.

The ability for the EAE method to produce pathogeneses and symptomologies similar to human multiple sclerosis is a paving road to better therapeutic approaches in clinical settings. However, we’ve only reached halfway in optimizing the highest potential method of investigating multiple sclerosis in mouse models. The next step is assessing mice for neurodegenerative deficits and behavioral defects post disease induction, a necessary objective in order to satisfy the bigger picture.

There are batteries of tests that enable researchers to evaluate and measure behavior and neuronal deficits post experiment. The significance of such test helps us extend our knowledge from the lab into clinical setting, in hopes to improve therapeutic outcomes. We have discussed multiple sclerosis mouse models above, here, we will extend the discussion to cover the assessment of post disease induction.

The Rotarod analysis test is used to study motor-behavioral functions, coordination, and fatigue in experimental mice groups [4]. The design of the performance test consists of mice trying to keep their balance on a turning rod with constant acceleration. The assumption here is that mice with neurological deficits tend to fall faster from the turning rod when compared to their normal counter parts. The hallmark of this test is its quantitative ability to measure the latency time of each group, allowing researchers to evaluate data more objectively.

Now when it comes to testing protocol, every lab will vary in the process of measurement and design. Instead of focusing on the minor differences between each set-up, let’s take a look at some features that are noteworthy when setting up the rotarod test:

So how do we benefit from this extensive yet effective design? Performance tests such as the Rotarod link pre-clinical findings to potential clinical findings that can have beneficial impacts on therapeutic development. Because of the tests coherent and objective measurement, researchers can better test therapies for neurodegenerative disorders such as multiple sclerosis.

Likewise, this is the key aim of multiple sclerosis mouse models, as we described above. Each model may differ slightly, but the purpose is to establish human multiple sclerosis mechanism in laboratory settings. Despite the challenges each model faces, being able to replicate progressive neuronal demyelination, inflammation, and other multiple sclerosis-related symptoms in the laboratory is a milestone closer to achieving better treatment outcomes in the human population.