Movement is essential to the survival of every living thing. In order to serve its purpose, this movement must be coordinated, i.e. the nervous system must work to make sure that all movement is directed, regulated and controlled. The loss of this coordination in humans is associated with a range of important diseases, including ataxia, Parkinson’s Disease and motor neuron disease; hence, understanding the neural basis of coordination is crucial in the study of disease and the development of treatments.

What is Motor Coordination?

Motion is central to the life of all organisms. In order to stay alive and propagate their genes, it is necessary for living things to constantly engage in behaviors that involve movement, such as searching for food, mating, chasing prey, escaping from predators, building dens and so on. Even the most simplistic organisms engage in movement, such as the protozoan paramecium, which moves through fluid by beating tiny hairs called cilia attached to its cell membrane.

It is not enough however for an organism to be able to move. In order for motion to be useful, it must be both controlled and coordinated. If, for example, a monkey wants to grab a fruit from a tree, it is not enough for the monkey to simply shoot out a limb in a random direction and hope that limb magically connects with a fruit. A multifaceted process must occur involving aspects of sensing, actuation, calibration and regulation to ensure the limb grasps its target.

First, sensors (primarily the eyes in this case) must detect the object of interest and situate it in a spatial model relative to the monkey’s body. Then, the monkey’s brain must command its arm and hand to move towards the object in a grasping motion. This movement must be calibrated by the procedural memory of previous movements; the monkey’s brain knows that the arm needs to move in a certain way at a certain speed in this kind of situation. All the muscles must work in concert, to ensure that the arm movement does not unbalance the rest of the body. And finally, the movement must be regulated, that is smoothed out so it is not jerky.

Motor coordination is highly visible in human life under conditions of both positive and negative extremity. On the positive side, when we see a human performing a sequence of complicated and precise movements, such as a dance or a surgical procedure, we can appreciate the amount of calibration and regulation required to perform this sequence with finesse. Equally, when a human being has, for example, a high blood alcohol concentration, we see that they move in a way that is characteristically uncoordinated, failing to properly sense their environment and calibrate, and sometimes even being unable to initiate certain kinds of movement.

The Neuroscience of Motor Coordination

Motor coordination is not confined to a single region of the brain, but is associated with activity in a range of areas. Most commonly highlighted are the motor cortex (which is in fact not one area but a collection of adjacent areas), the cerebellum and the basal ganglia. 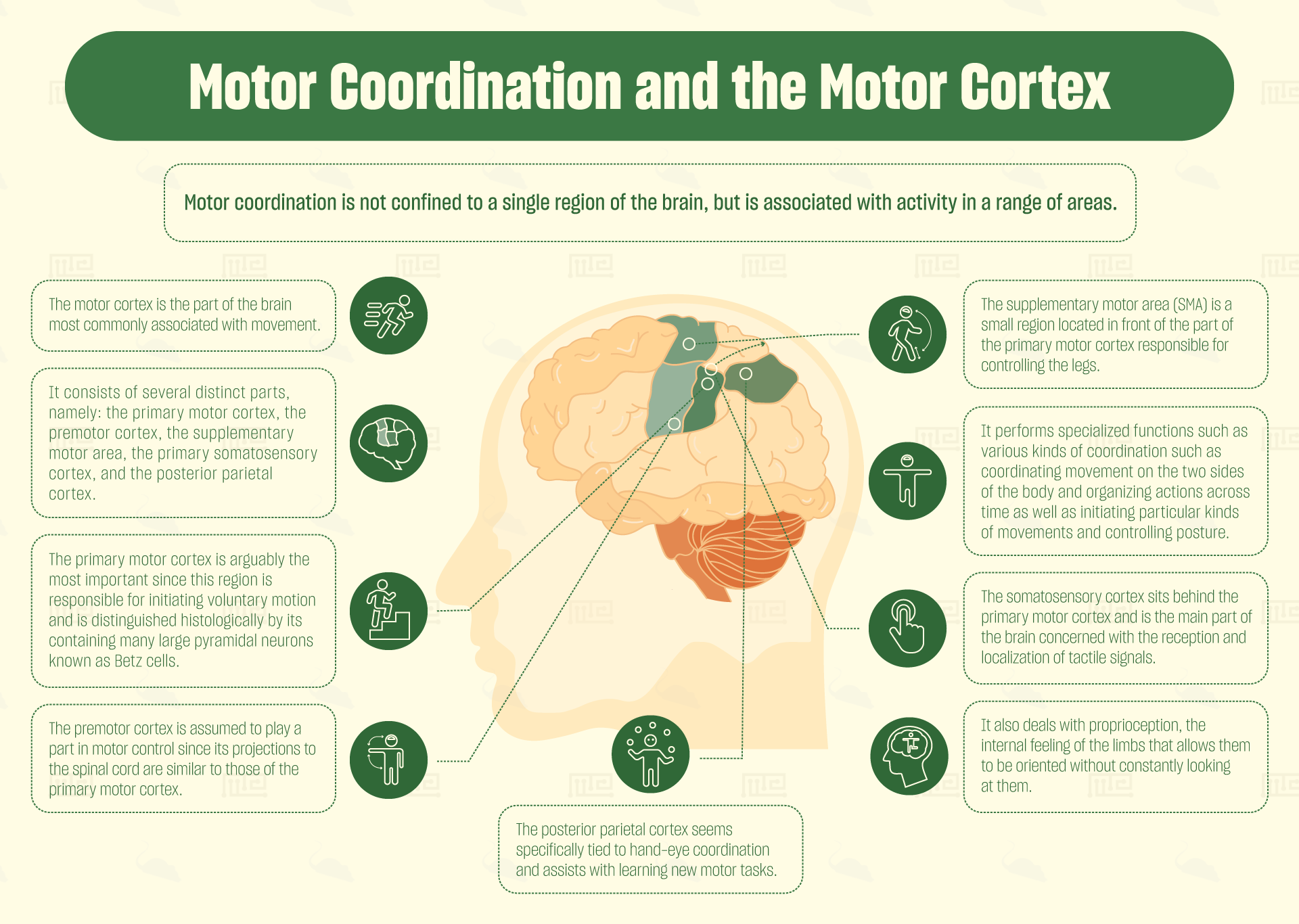 Of these, the primary motor cortex is arguably the most important, since this region is responsible for initiating voluntary motion. The primary motor cortex is divided into sections, each of which corresponds to a different part of the body (forming a “homunculus”). It controls these body parts by sending signals down cranial nerves to the spinal cord, where they then synapse onto motor neurons. The primary cortex is distinguished histologically by its containing many large pyramidal neurons known as Betz cells.

Research has shown that when an ischemic lesion is administered to the part of the primary motor cortex in mice responsible for controlling their forelimbs, they show a distinct forelimb-dragging behavior in the cylinder test, indicating an inability to control the affected limb.[2] The cylinder test is a simple protocol in which the mouse is placed inside a plastic cylinder and exhibits a natural behavior of attempting to escape by rearing up against the wall. Researchers can then observe the experimental mice and easily see if their ability to rear is deficient compared to controls.

Some studies suggest that the premotor cortex assists with more complicated movements, especially those requiring a lot of sensory calibration.[3] While a view seems to have emerged amongst some that the premotor cortex merely plans movements, whereas the primary motor cortex is responsible for actually carrying them out,[4] studies have long shown that both regions are capable of initiating movement and neither is truly subordinate to the other.[5]

The supplementary motor area (SMA) poses even more of a mystery. It is a small region located in front of the part of the primary motor cortex responsible for controlling the legs. In non-human primates, this region contains a body-map, but it does not appear to do so in humans. Specialized functions proposed for the SMA include various kinds of coordination such as coordinating movement on the two sides of the body[6] and organizing actions across time.[7] Other functions proposed include initiating particular kinds of movements as well as controlling posture.[8] It may be that the SMA is a remnant from human ancestors who needed to be capable of dexterously climbing trees.

The cerebellum, whose name means “little brain” is a walnut-shaped structure that sits below the cortex at the back of the brain, connected to another subcortical region called the pons. The full importance of the cerebellum is still being uncovered, with recent discoveries highlighting its contributions to cognition, but it is most frequently associated with motor coordination.

Humans with lesions in the cerebellum do not suffer any inability to initiate movements, but their movements are no longer well organized in space and time, becoming sudden, excessive and unregulated. It seems like coordinated movement requires a sort of balance of “push and pull” i.e. the motor cortex provides the push, initiating voluntary movements, and then the cerebellum provides the “pull”, reining in the excesses of the movement and smoothing it into something more controlled.

Whereas in humans the cerebellum is quite small compared to the rest of the brain, in many other species—including mice—it’s relative size is much greater, perhaps reflecting the faster and more complicated locomotion required by these species. In mice, the relationship between cerebellar activity and different aspects of locomotion has been studied; one paper found that whereas some of the cells in the cerebellum were highly tuned to the speed of movement, some were tuned to the direction, and others to the rhythm of stepping. The authors suggest that the mouse cerebellum plays a role in adjusting these parameters during motion.[11]

One study has shown that damage to the cerebellum in mice affects their ability to learn in tasks that require strenuous motor activity. Specifically, mice with lesions to different parts of the cerebellum all showed reduced performance compared to controls in the Morris water maze.[12] The Morris water maze is a test whose outcome depends on both navigational memory and motor capability, which requires mice to learn the location of a raised platform in a pool of water and swim to it as quickly as possible. Mice who take longer to find the platform are considered to have performed worse.

Perhaps the most famous motor disorder associated with the basal ganglia is Parkinson’s Disease (PD). PD patients have jerky, shaky, uncoordinated movements and show a characteristic stooped posture with a shuffling gait. This is thought to be caused by the massive loss of dopaminergic neurons in the substantia nigra, leading to a lack of inhibition of thalamic and cortical circuits, and so, unregulated movements. Treating PD patients with the drug L-dopa restores dopamine concentration in the brain and dampens the shaking.

A number of mouse models have been created to facilitate the study of PD, including the strains Thy1-aSyn and Pitx3. The PD-like symptoms of these model mice can easily be seen by their reduced performance in the rotarod and raised beam tests for motor coordination.[15] In the rotarod test, mice are required to run across a rotating cylinder and maintain their balance. The time that it takes each mouse to fall off, or the maximum speed that each mouse can handle before falling off, is measured and the different mice are compared. In the raised beam test, mice are required to walk across a narrow beam, with the time taken recorded as well as how many times they slip or fall.

Neuroscientific research has revealed how various parts of the brain contribute to the coordination of motor behaviors. These patterns of functional specialization are not only seen in humans but also in other animals including mice. This knowledge of how different brain regions contribute to the control of movement, combined with the development of a range of robust experimental techniques, has allowed for scientific studies with humans and model organisms to contribute to the understanding and treatment of important diseases.

The Neuroscience of Summer Vacation

The Neuroscience of Summer Vacation