A Guide To Animal Seizure Models

Translation, regardless of the medium it’s put to use, always consists of challenges and difficulties. Aiming for a perfect copy paste scenario is highly unlikely, but the more we investigate, the closer we get to achieve the main goals. Given the ethical boundaries and limits when it comes to human experiments, researchers turn towards animal models in hope to replicate the respective disease, and perhaps eventually translate that model back into human context.

The disease of interest here revolves around seizures and epilepsy. In humans, epileptic seizure is diagnosed when a patient presents with spontaneous and persistent seizures, which are accompanied by abnormal signals of electroencephalographic (EEG) activity [2] [3]. Seizures are accompanied by a diverse selection of symptoms, including motor symptoms, behavioral symptoms, cognitive dysfunction, and neurological deficits.

The accompanying symptoms are simultaneously an advantage and disadvantage when it comes to animal models. Measuring changes in pathophysiology and neural circuits, and evaluating behavioral and cognitive dysfunction all pave the way to a better understanding of the foundations of human epilepsy. However, the cluster of symptoms mentioned is blurred amongst other types of psychological and neurological disorders. In effect, developing an animal model becomes more challenging [2].Despite the ambiguity, researchers have not left the issue in the dark. On the contrary, criteria and validation methods have been developed to ensure investigators are on the right track when approaching animal models of epilepsy; or any animal model for that matter. Nonetheless, the following text acts as a comprehensive survey, illustrating the methods and processes needed to establish an objective animal model of epilepsy, while also discussing the advantages and disadvantages of each category.

Behavioral measurements play a crucial role in explaining epileptic seizures in animal models. If pathological behavior can be measured in seizure-prone animals, this paves a way to utilize different ways of seizure induction. This is done by observing the pathological behavior and finding it’s respective brain region. From that, researchers can manipulate the specific brain region(s), either genetically or pharmaceutically, and elicit the desired behavior. Pathological behavior in seizure models consists of three broad categories: 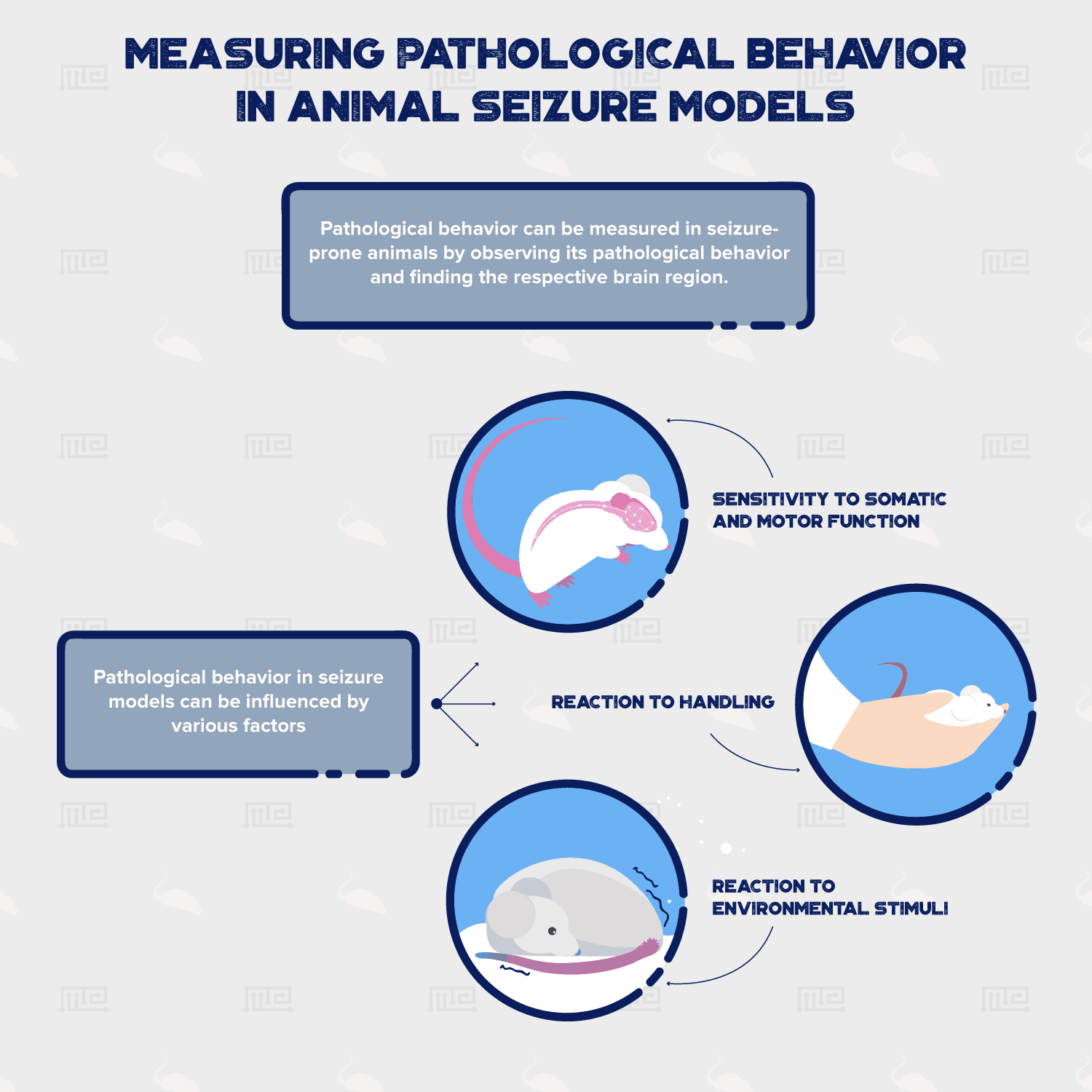 The significance of all this is to simply guard potential animal models against any unnecessary pitfalls, which will be explained within each category below.

Predispositions and early mutations can blur the validity of behavioral phenotype when behavioral assessments are used. If, for example, researchers have doubt as to whether their animal subjects are predisposed to a certain behavior, and are unsure of whether the elicited behavior is from the experiment or from the disposition, certain preliminary guides can help lower the amount of doubt present. Detection of early signs of neurological dysfunction regarding motor function can be tested using some of these tests [2]:

These tests and others similar to them allow researchers to establish which of their subjects are predisposed to early motor dysfunction, regardless of epilepsy. Thus implementing such a significant step as a precaution prior to the beginning of any animal model can help eliminate unwanted covariates. Not every selected strain of mouse develops normally. Just as the prevalence of congenital disease in humans is evident, it should not be ignored in the mice population either.

A second class of assessment that distinguish seizure-prone mice from control mice utilizes the importance of locomotor activity. The aim of the tests below is to establish certain repetitive behavior that is consistent with epileptic seizures. Behaviors such as hyperactivity, coordination, and day versus night activity, can better establish confining lines between seizure models and other similar animal models.

These tests provide not only an insight into seizure models, but also help exclude look-alikes 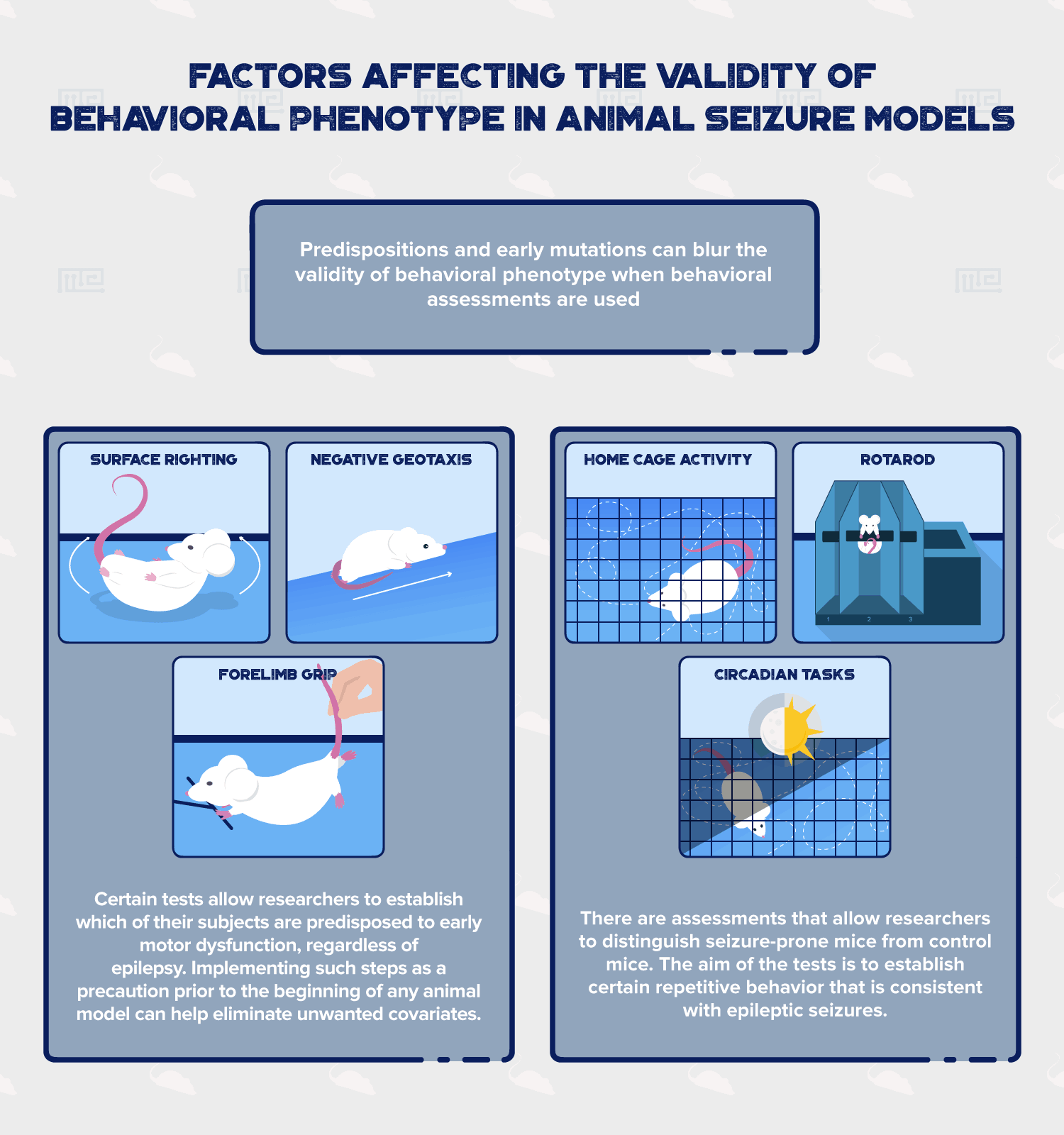 from potential valid models. The rotarod test is one method to do so. Because some neurological disorders, such as Dystonia, elicit similar seizure-like symptoms, such as twitching and involuntary movements, the rotarod test helps distinguish between the two sets of disorders. Typically, mice afflicted with Dystonia have poor balance and coordination, and fail the test early [2].

Kindling is a seizure model established to mimic human epileptic seizures. The model centers around the notion that recurrent electrical stimulation to several brain regions leads to the development of seizures, also known as the kindling phenomena [2].

Upon investigation, researchers noticed that the kindling effect became associated with environmental cues. Thus, instead of the electrical stimulation, other conditioned objects, like the rodent’s cage or the sight of food, caused the onset of seizures.

Because of such correlated occurrences, several learning and cognitive assessments have been used to help better fit the animal seizure model requirements.

The tests mentioned above are essential to researchers, especially when it comes to satisfying animal model criteria. All three tests evaluate certain behavior that can be hazy in origin. Take any of the three assessments, e.g. the Morris Water Maze test. Normal mice, upon completion of the test several times, can recall spatial cues much better on the field, which enables them to complete the maze much faster. On the other hand, the kindle-induced mice show no progress whatsoever during these tests. This means that working memory and long-term memory are impaired in these mice, and tests such as the Morris Water Maze, Radial Arm Maze, and Fear Conditioning can help distinguish that.

A general criterion for animal seizure models is that the behavioral outcomes, short term or long term, should resemble behavioral manifestations in the human context [1]. Kindling effect contradicts this criterion. The behavioral outcomes, despite being similar to those of seizures, are not seizure driven; they are in fact driven by associated cues. This is an important factor to take into consideration when developing animal models and also when behavioral tests are administered. The significance of these precautions ensures validity and reliability of the potential model to be.

Animal contact, despite being a norm in every lab, has been shown to consist of compromising factors relative to animal studies and models. The contact between the experimenter and the subject, termed handling, can undermine the validity of the experiment.

Research has shown that when handling an animal, several neural and endocrine systems become activated, eliciting a range of emotional arousal, awareness, and overall chemical alteration [2]. This notion is of great importance because kindling and handling can both blur the lines of actual seizure symptoms and what seems like a seizure symptom. For example, the emotional exhibition of a certain behavior may be mistaken for aggressive (seizure symptom) rather than defense (a result of kindling and handling) [2].

This becomes evident in mice that are kindled and handled because, with these experimental mice, both kindling and handling induce anxiety, which hinders performance in behavioral assessments.

As a result, researchers need to take into consideration both the kindling and handling effect when administering behavioral tests or evaluating behavioral phenotype. Let’s take a look at several tests that help further illustrate these effects [2]:

Typically, mice that were neither kindled nor handled perform well on these tasks. Yet their experimental counterparts, mice who were kindled or handled, perform poorly and much slower in the above tasks. Thus, such factors can have a detrimental effect on developing a potentially translational animal seizure model

To establish a well-validated and reliable animal seizure model, several precautions must be implemented in order to ensure such a path. As we saw throughout the text, animal models, and not just those specific to seizures, but animal models in general, are susceptible to mistakes and fallbacks.

To ensure that the necessary steps are taken, the literature, including this text, provides examples of how to look out for such pitfalls. Firstly, it is important to distinguish behavior that traces its origin to seizure induction and behaviors that are derived from any other source. To do so, researchers have developed and implemented behavioral tasks that can help illuminate this. Tasks such as the Morrison Water Maze, the Radial Arm Maze, and the Elevated Plus Maze can help researchers distinguish what is truly seizure behavior and what is a pseudo-behavior.

By implementing these tasks, and others like them, researchers can better satisfy the general animal criteria, and make sure that their models are on the right path. The goal here is to achieve a model that can be translated into the human context; and following such guidelines, as rigorous as they may be, should help to supplement future research.

The Effects of Creatine on Mice Behavior

The Effects of Creatine on Mice Behavior