In the 1950s, Ingalls and colleagues discovered “some very plump young mice” in one of their mouse colonies. Obesity in mice is typically very rare, so the physical characteristics of these particular mice set them apart from the rest of the colony. For example, at a mere 4-weeks of age their bodies were described by the researchers as “rather square” and with “expansive hind quarters”. As they grew to adulthood, the mice reached body masses as much as three times as their normal littermates. Although the mutation was spontaneous, today, these mutant ob/ob mice are specifically engineered as a model for obesity and Type-II diabetes. 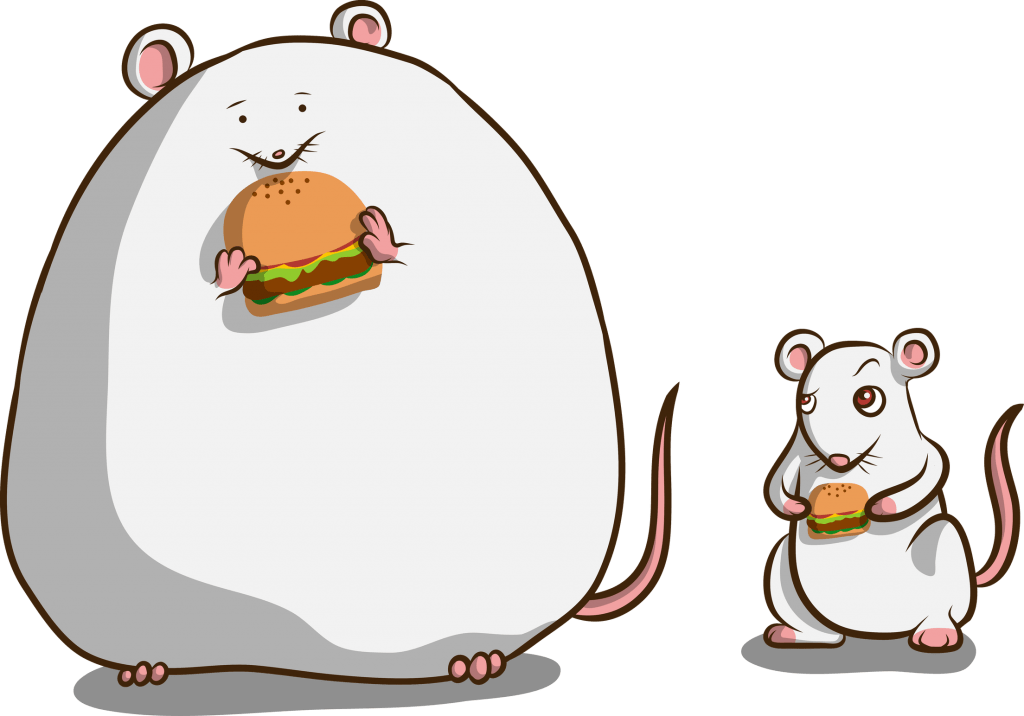 These mice are generated by targeting a point mutation to the leptin gene and are commonly referred to as the ob/ob mice (the shorthand notation “ob” was first proposed by Ingall and colleagues). Leptin is primarily found in the adipose fat tissue of normal mice. One of leptin’s key roles is help regulate appetite. Thus, it is unsurprising that a mutation in this gene results in uncontrolled food intake (hyperphagia) by the ob/ob mutant mice. Less obvious, however, is the behavioral profile that these mice demonstrate, most especially in anxiety tasks. In both the Elevated Plus Maze (EPM) and the standard light/dark box test, ob/ob mice show higher levels of anxiety than the control mice.

Although hyperphasia leads to obesity in the ob/ob mice, it should be noted that diet alone is insufficient to explain weight gain. When these mice are placed on a restricted diet, they still gain excess weight compared to their normal littermates. A more effective way to control weight gain and to counteract the diabetic profile in ob/ob mice is to target the effects of the mutation directly. Mice who received intraperitoneal (IP) injections of leptin showed anti-diabetic effects including better glucose metabolism (and decreased food consumption).

A five-day course of leptin IP injections also resulted in some anxiolytic effects in the Elevated Plus Maze (EPM). In other words, these mice significantly increased the total number of entries into the open arms compared to saline-treated controls. In addition to higher anxiety in the EPM, these mice show higher levels of anxiety in the light-dark box test. In the light-dark box test, mice are put in a compartment (two-thirds of the box) that is brightly illuminated and the latency to cross to the darker compartment (less stress producing) is measured as an index of their anxiety levels.

Although the ob/ob mice have consistently demonstrated higher levels of anxiety than their control littermates, they are not deficient in their ability to perform in appetitive spatial learning tasks. Although it seems counterintuitive at first, the presence of a food reward does not drive a difference in performance. Leptin-deficient ob/ob mice are actually comparable when it comes to food-motivated spatial navigation tasks, compared to their control littermates. This suggests that while leptin does have an important interaction with anxiety, the interaction with food motivational systems is not simple and likely involves other neural circuits besides those implicated by the hormone, leptin (i.e. this is not simply a hypothalamically mediated process).

However, when it comes to using any mutant mouse line as a potential animal model, it is important to note the potential confounds that are immediately presented. Since the ob/ob mice have consistently demonstrated a difference in locomotion (significantly reduced, when fed ad libitum) compared to normal littermates, it is important to rule this out as a factor when designing behavioral tests. While ob/ob mice may be normal in appetitive learning tasks, it is important to control for diet prior to testing in any protocol, which will depend on comparable locomotion between experimental and control mice.

Overall, these mice provide an excellent model for studying the biological and behavioral effects of leptin deficiency, including diabetes and obesity.