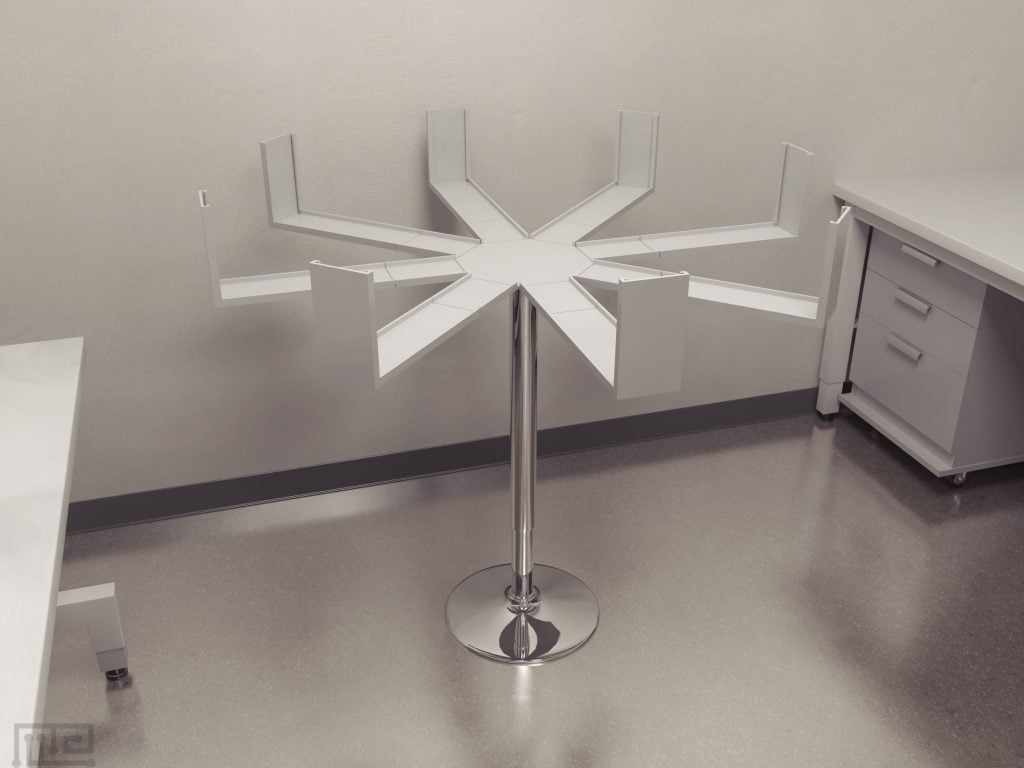 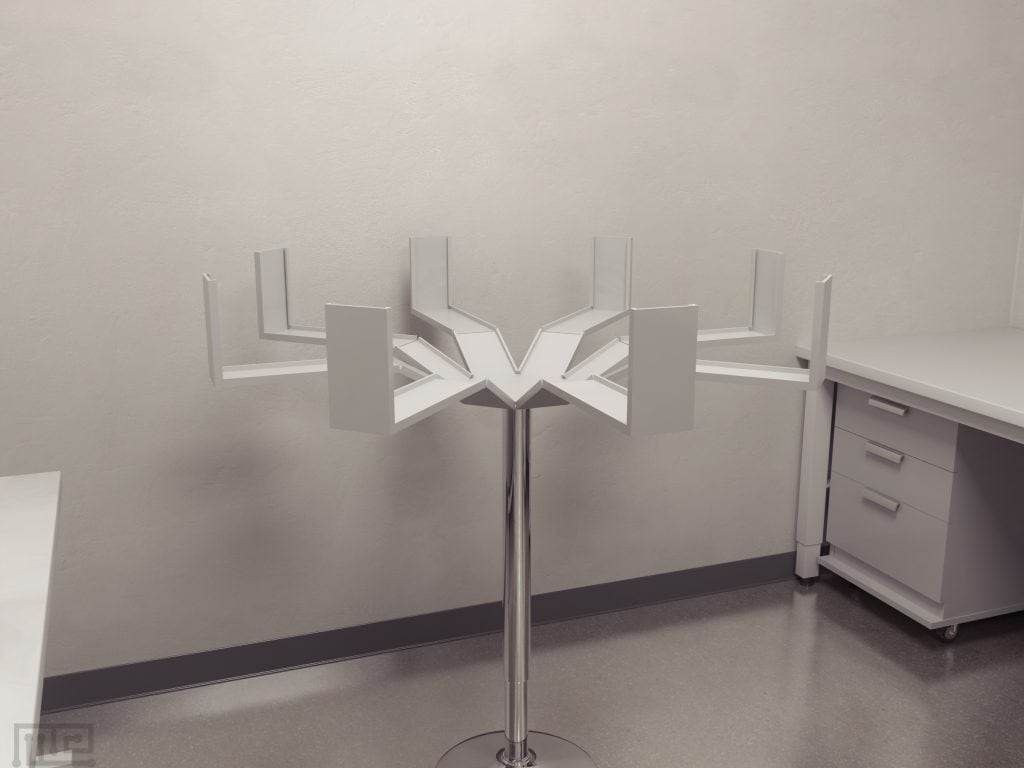 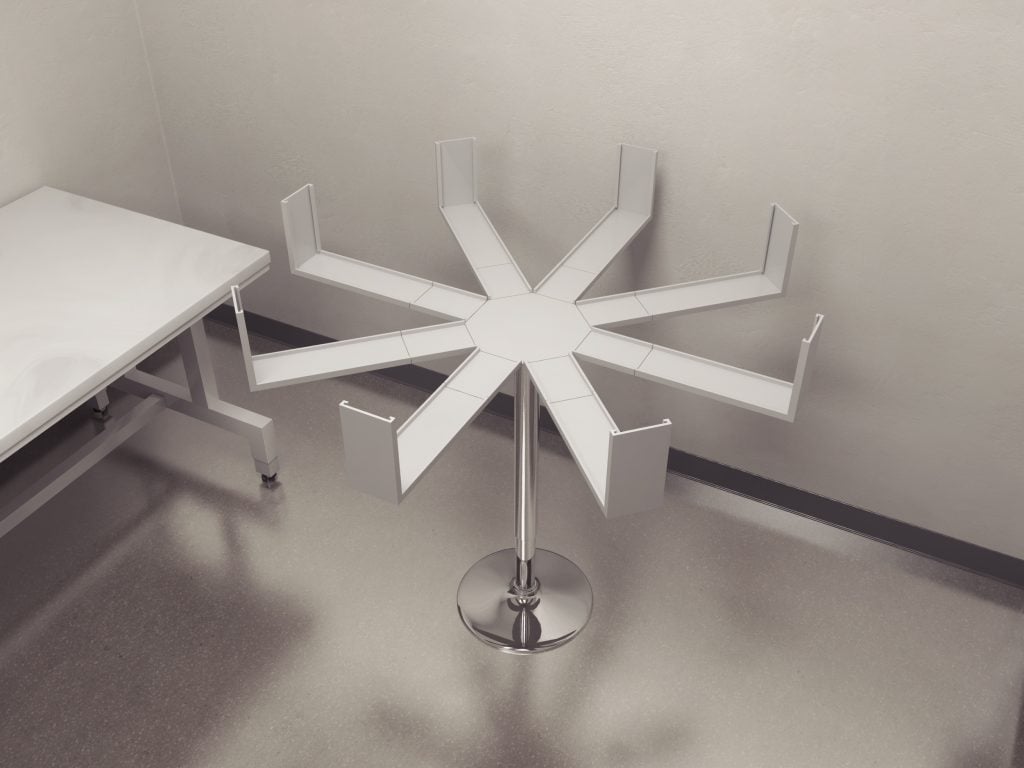 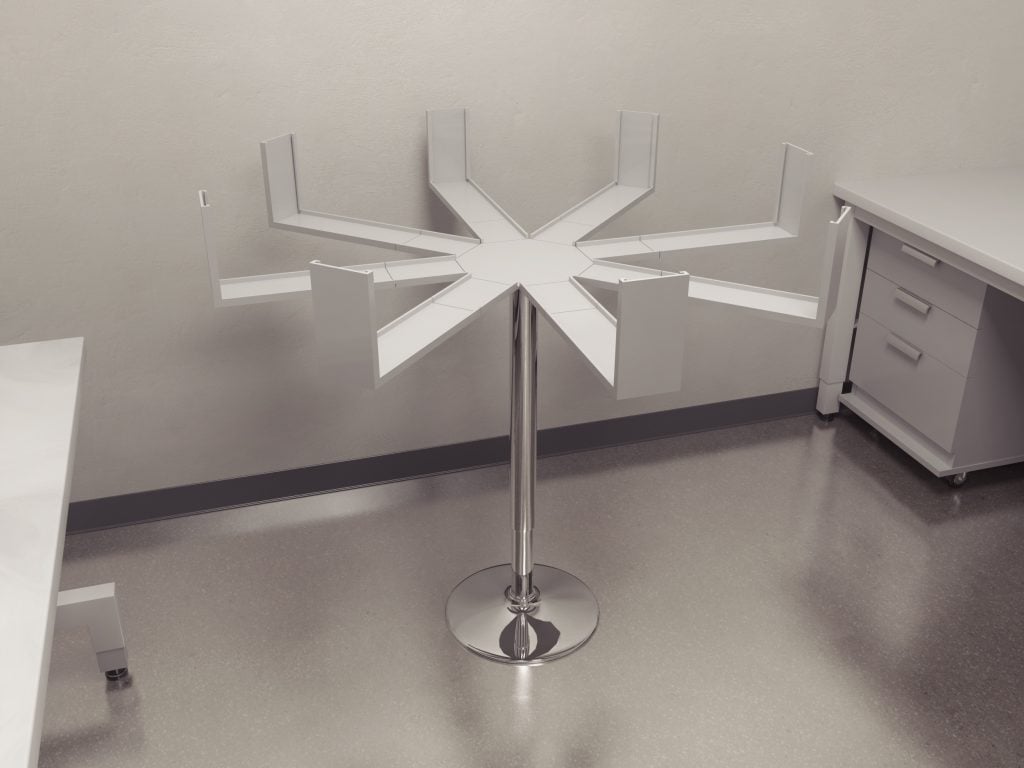 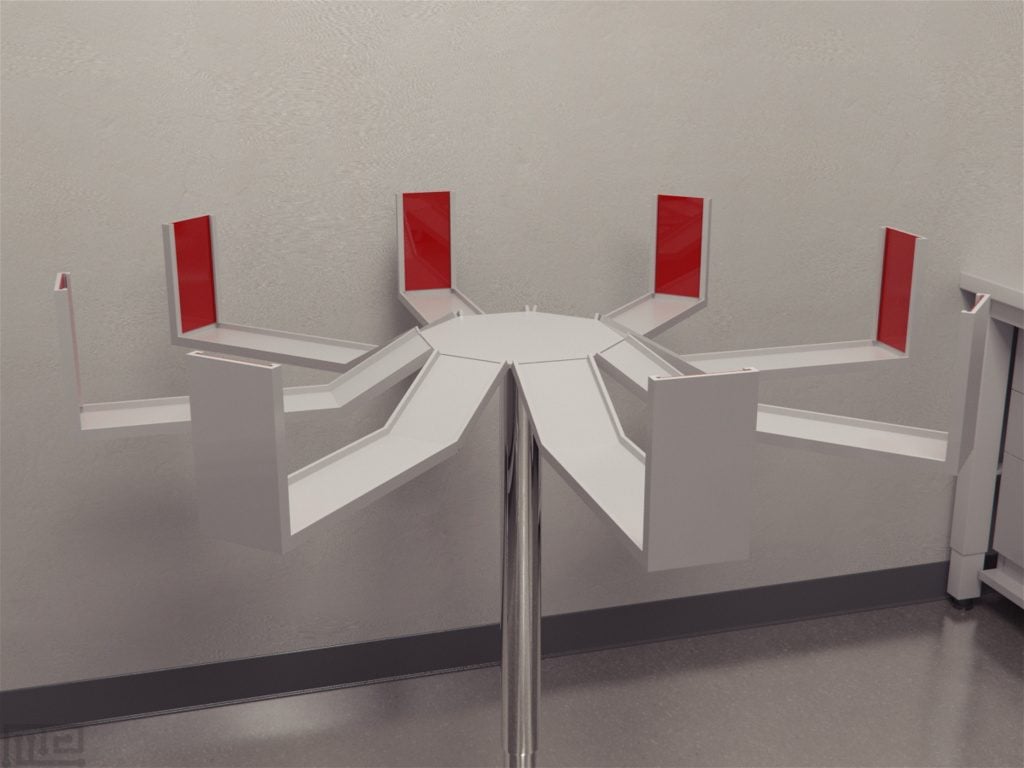 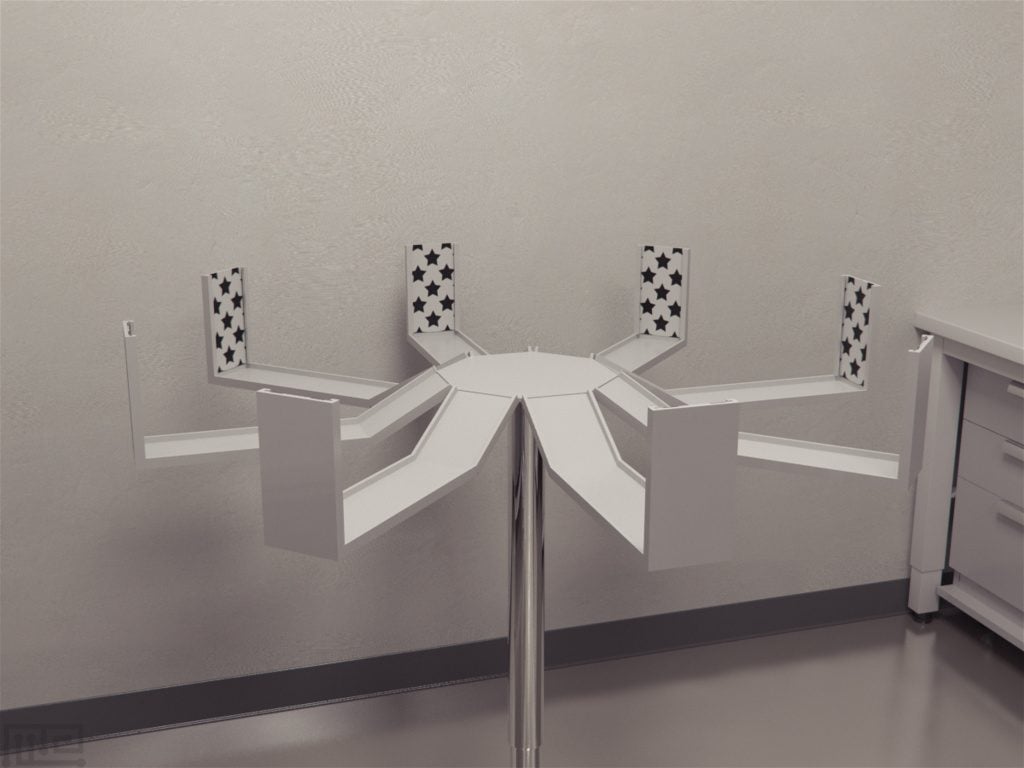 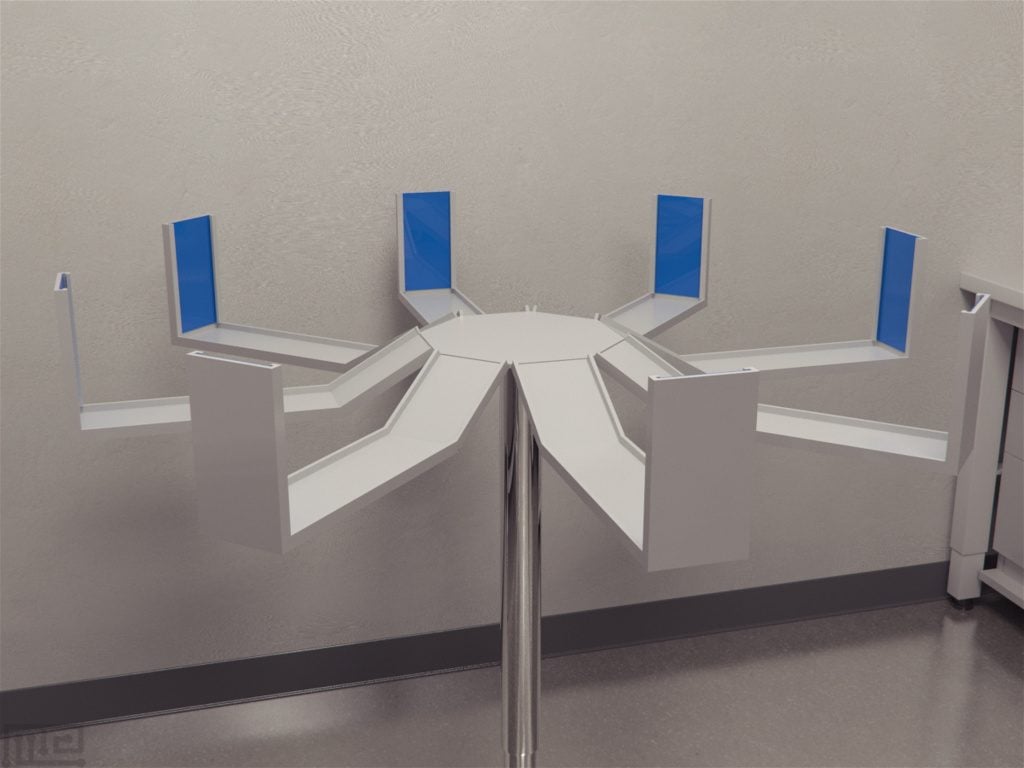 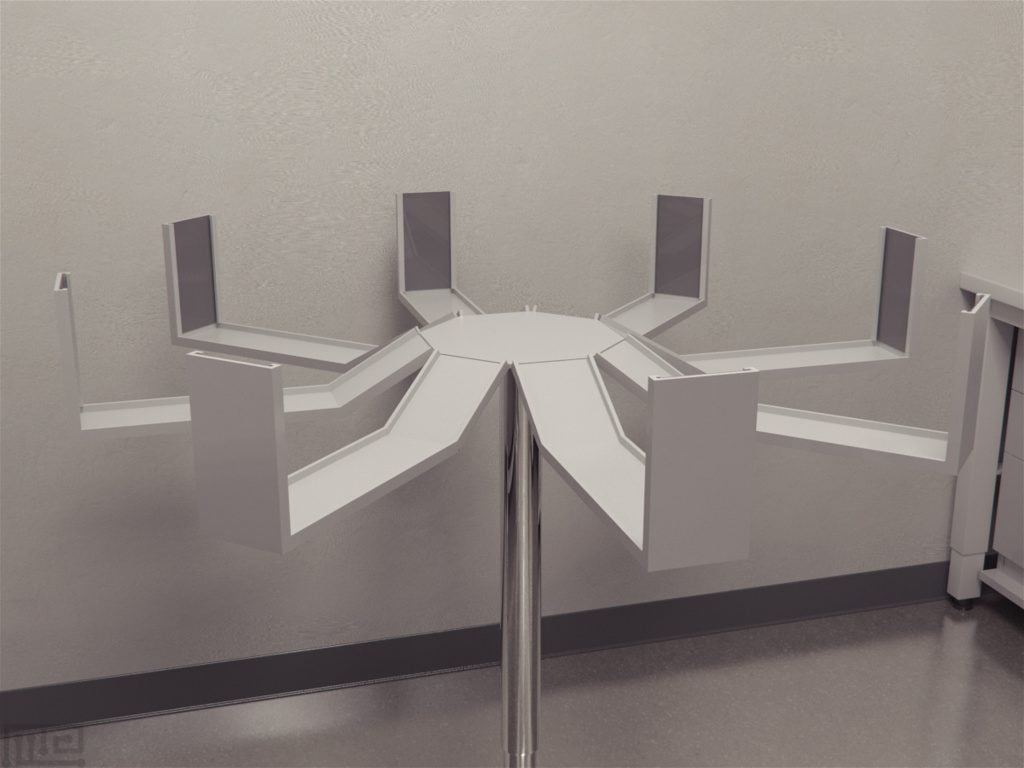 3D Radial Arm Maze is a modified version of the Radial Arm Maze developed by Abdel Ennaceur in 2006. Ennaceur’s 3D radial arm maze became a groundbreaking venture because of the unique design; the subjects exposed to unfamiliar open spaces without a safe alternative.

The 3D maze is designed with a central platform that is connected to flexible arms via bridges. The adjustable design allows different configuration of the arms and platform to simulate anxiogenic spaces that emulate varying degrees of anxiety induction. Unlike its predecessors and other maze models, the 3D Radial Arm Maze employs open spaces and spatial navigation in both horizontal and vertical planes without giving the subject a choice between safe spaces and anxiogenic spaces. By removing the option of safe spaces, the maze forces the subject to explore in order to find escape routes or protected spaces.

The maze serves as an effective model for understanding the neural and behavioral mechanisms underlying spatial learning and memory. It also enables investigation of drug effects on memory and cognition.  Using a wide range of spatiotemporal parameters of transition response between different areas of the apparatus, researchers can gain useful insights that serve in analysis and interpretation of the results. An interesting observation of varying emotional response capabilities of the different subjects is also made possible through the apparatus.

The 3D Radial Arm Maze consists of an octagonal shaped central platform of 30 cm diameter with equally spaced arms of dimensions 51 cm x 11.2 cm, radiating from the platform, raised 60 cm from the ground. The platform itself can be raised or lowered by 15 cm.

The general 3D Radial Arm Maze procedure involves setting up the apparatus in the desired configuration and placing the subject on the central platform. The subject is allowed to traverse the setup freely, and the activity is recorded through Noldus Ethovision XT. The apparatus is cleaned and sanitized before every test to minimize the effect of any olfactory residue. The subject is placed on the central platform as the starting position.

Evaluation of reaction to novelty and open spaces

The test to determine the response of the subject to novelty and open spaces can be performed with three exclusive experimental conditions- without food deprivation, with food deprivation, and in the presence of safe space. (Ennaceur et al., 2006)

For the first experiment, the subject is chosen at random from a batch and tested in one of the three maze configurations. Each group is tested only in one configuration of the maze. The subject is left to explore the maze and observed for 12 minutes.

Under the second experiment, subjects are tested on an elevated arm configuration. The apparatus is modified using wire mesh on the floors of the bridge and cups with pellets as a reward are kept at each arm end. The subject is left to explore the maze until all eight choices are made or 10 minutes have elapsed.

For the third experiment, a cylinder with small openings leading to each arm is used to create a safe space over the central platform. Subjects are tested under different arm configurations, and results are compared. Each session lasts for 12 minutes.

Evaluation of the anxiolytic effects of benzodiazepines

Subjects are tested under different dosage of drugs on a raised arm configuration of the apparatus. The test is used to study the primary effect of benzodiazepines as an anxiolytic agent by observing the subject performance in a spatial navigation task. The level of anxiety is indicated by the lower number of arm entries. (Ennaceur et al., 2008) The test may serve as an animal model to demonstrate anxiety responses of humans under similar conditions.

Ennaceur, 2011 omitted the conventional habituation session to study the role of emotionality in the acquisition of the task in the 3D radial arm maze. In this experiment, the subjects are directly introduced to the maze without prior habituation session, and with all the arms baited with reward. The subject is carried from the cage in a bucket and directly placed onto the central platform. The subject is then expected to traverse all the eight arms of the maze or until the cut-off time (10 minutes) has elapsed. Each novel arm entry is recorded as a correct choice, and if the subject reaches the same arm again, it is referred to as the incorrect choice. The activity of the subject is recorded with the help of an overhead Noldus Ethovision XT without the presence of the experimenter in the experimental room.

Ennaceur advocated the usefulness of the acquisition of the spatial memory tasks without habituation session as it helps determine the emotionality factor within the same testing apparatus and conditions. (Ennaceur, 2011)

Evaluation of the role of H3 Receptor in anxiety

The 3D radial maze can be utilized to probe the controversial utility of the H3 receptor with respect to the anxiety domain. Abuhamdah along with Ennaceur et al. 2012 studied the effects of H3 agonist (Methimepip) and H3 antagonist (JNJ-5207852) in the 3D radial arm maze. In their experiment, the bridges were tilted at an angle of 40◦ simulating the raised horizontal arm configuration above the central platform. Cue plates were used as visual stimuli, and the bridge floors were covered with wire mesh. They concluded that H3 receptor has no role in anxiety, but it may have considerable utility in fear-induced avoidance response.

There are 12 behavioral parameters of concern in the 3D radial arm maze.

The following graph shows a sample for a number of entries to the bridge when the subject is tested for its response to novel and open spaces.

The following graph shows a sample for the frequency of approaches to bridges when the subject is tested for the effect of a benzodiazepine as an anxiolytic.

The 3D Radial Arm Maze enables testing the subject’s response to open spaces and spatial navigation skills in both horizontal and vertical planes. The flexible design of the arms enables testing under different configurations and for an individual arm to be configured separately. Additional modifications such as using a wire mesh and enclosing of the central platform to create different degrees of protected space area are also possible. The cue plates additionally can be used to create visual stimuli. The simple design of the apparatus makes it easy to store and use.

The 3D maze is a cherished novel tool in the investigation of underlying neural mechanisms of anxiety responses in addition to learning and memory, and in assessing the effects of potential anxiolytic drugs.

Although the 3D Radial Arm Maze is useful in understanding behavioral responses induced by anxiety, the performance of the subjects cannot be generalized as subject’s emotional status may play an important role. Overtraining of the subjects may also result in erroneous results.