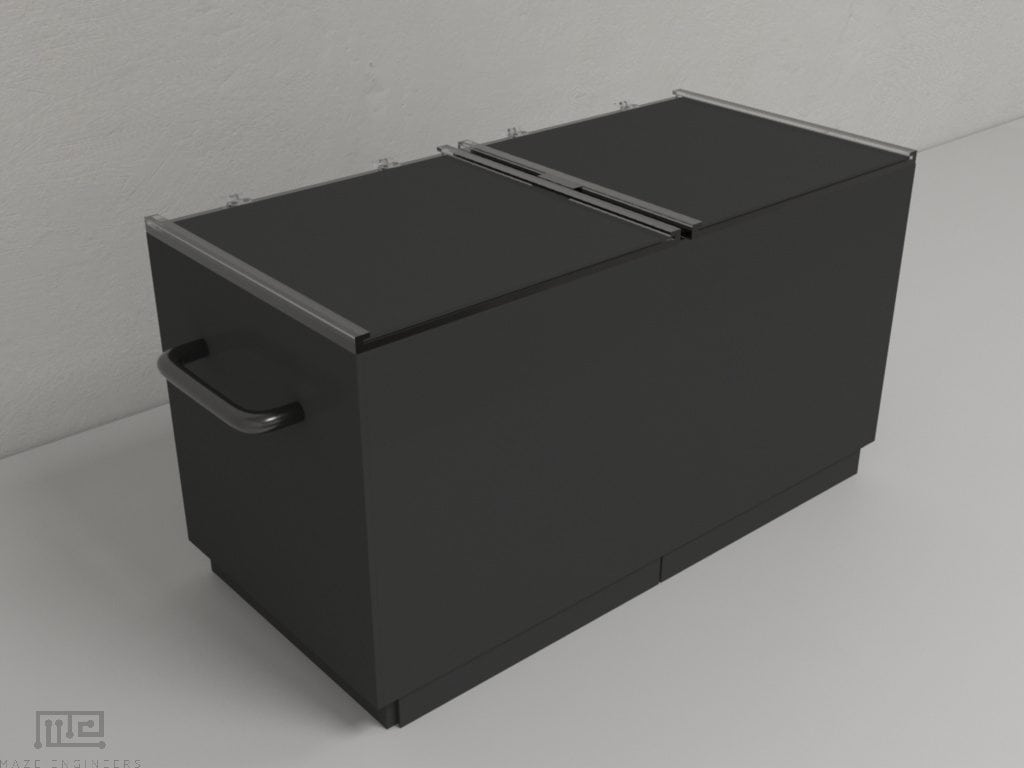 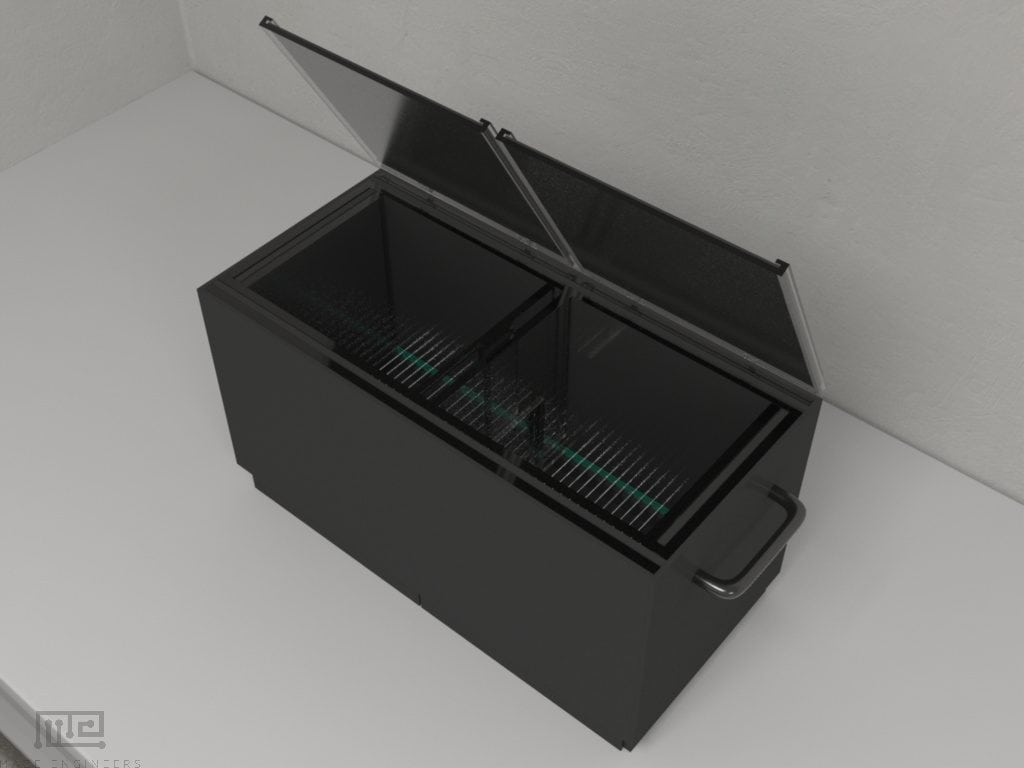 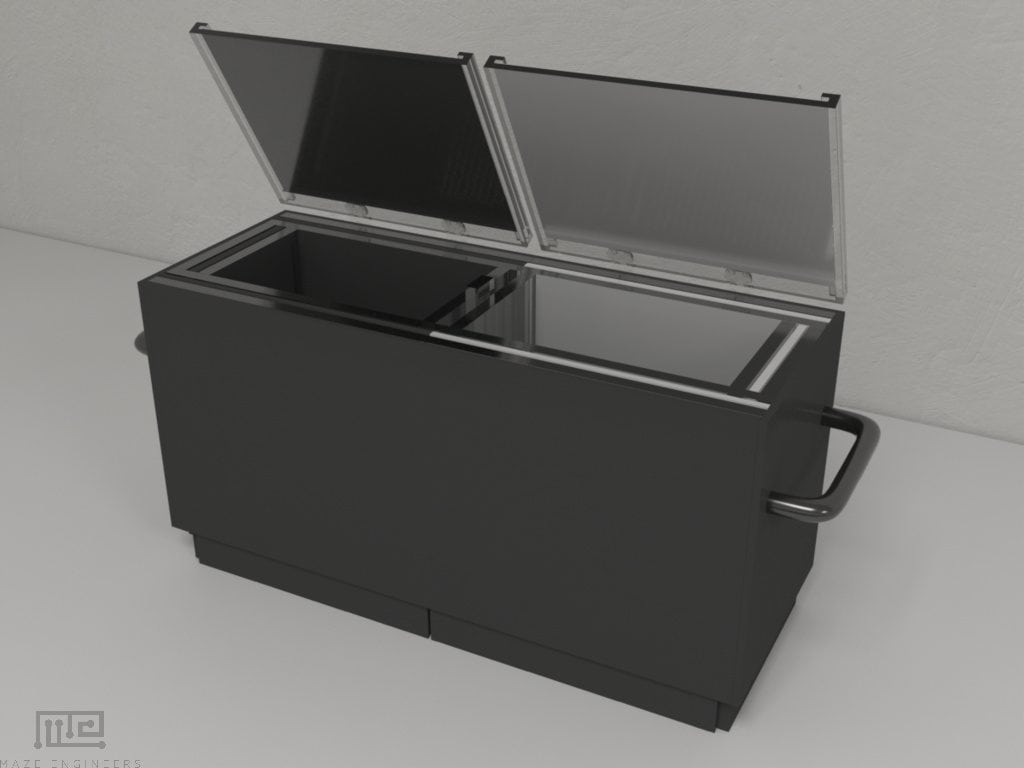 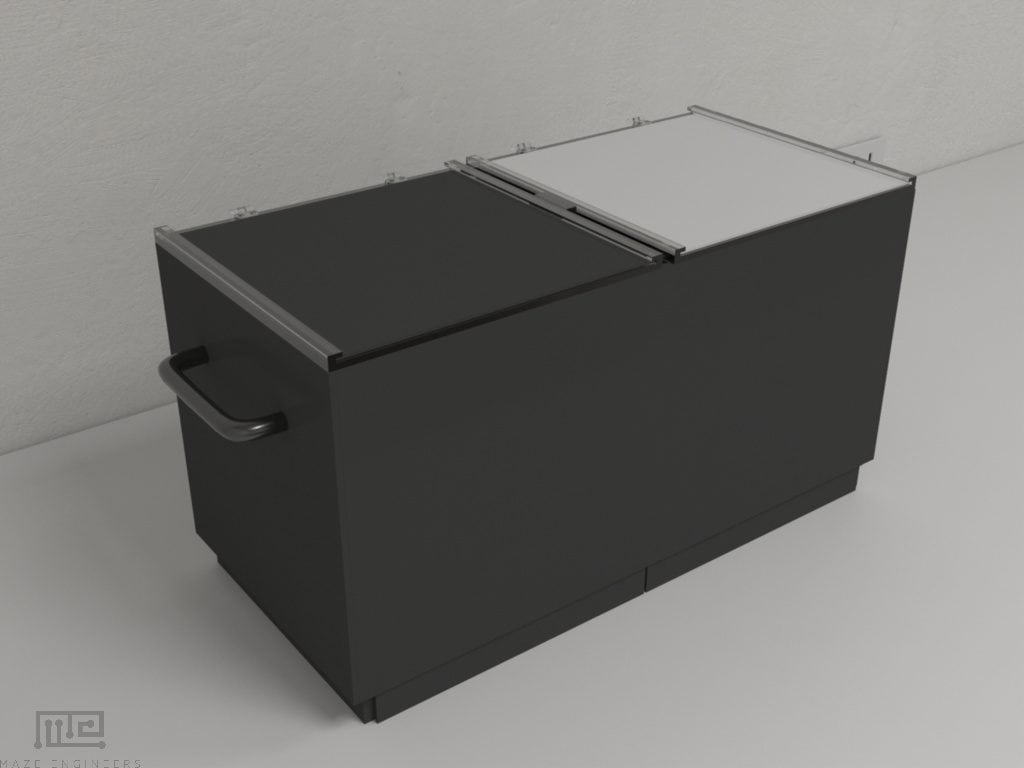 The MazeEngineers Shuttle Box is a flexible system for both active and passive avoidance experiments. It comes with two independent grid floors that allow for flexible adverse stimuli. A top-loading door allows easy access inside the box. The cage contains a sound generator and a visual stimulus (light) that functions separately for each compartment.

Rodents in the cage are detected by two separate sensor arrays that have high sensitivity and specificity. Data can be combined with the Noldus Ethovision software and integrated with Neuralynx using the Conductor Software.

Note: Does not include an Isolation Chamber

Easy to replace acrylic plates with black and white contexts for passive and active avoidance experiments.

The passive and active avoidance tests are behavioral tasks widely used in neuroscience to assess different forms of fear-based conditioned avoidance learning in rodents. The avoidance test paradigms are protocols that rely on a common experience-driven behavioral adaptations, which is the inhibition of innate activities or learned habits which have led to aversive consequences. This type of learning is based on the notion that a biologically probable response that was previously ended by an unpleasant event will be inhibited in the future (Herrnstein, 1969). Avoidance occurs when an aversive event (typically a brief foot shock) can be predicted through conditioning and is prevented as a result of the avoidance response.

Passive avoidance describes experiments in which the animal learns to avoid an aversive event by suppressing a particular behavior. To learn to do so, the aversive stimulus must be clearly associated with the active behavioral component.

The passive avoidance task is be carried out in a shutter box with a light chamber and a dark chamber separated by a doorway (the step-through version of the task). Given that illuminated environments are unpleasant to rodents, when placed in the light chamber, they are led into the preferred dark compartment by its innate photophobia. During habituation, they’re allowed to do so, but in the conditioning phase of the passive avoidance test, the animal will receive a foot shock when he crosses to the dark chamber. His innate behavior of seeking a darker environment will thereby become associated with an aversive stimulus. When placed again in the light chamber, the animal will avoid entering the dark, shock-associated chamber (Bures et al, 1976).

Active avoidance requires performing a specific behavior in order to escape or avoid the aversive stimulus. It is a conditioning paradigm in which the animal learns to control the application of an unconditioned stimulus (US), in this case, a foot shock,  by appropriately reacting to a conditioned stimulus (CS) preceding the US, such as a light cue. The first stage of avoidance learning is usually to escape from the US. With continued training, anticipatory reactions appear which enable the animal to avoid the US altogether. In the active avoidance test, the rodent is placed into a shuttle box and is trained to move to the opposite side of the box in response to a cue that signals an incoming foot shock. Movement to the opposite side of the chamber in response to the presentation of the shock-predictive cue alone is regarded as active avoidance, whereas movement to the opposite side of the chamber only after receiving foot shock is regarded as an escape response (Bures et al., 1976).

Memory of learned avoidance can be assessed at different time points after conditioning training and is manifested by an increased latency to enter the dark chamber. The resulting increase in response latency reflects the animals’ ability to learn.

The passive and active avoidance tests use a shuttle box apparatus. It consists of an acrylic box (with variable size depending on the rodent species) divided into two chambers by a doorway through which the animal can shuttle from one chamber to the other. The connecting doorway can be automatically closed by a guillotine door.

The floor of the box has an electrifiable grid through which shocks can be delivered via a calibrated shock generator. The box also has a sound source to deliver auditory cues. The chambers can be made light or dark according to the experimental needs. The properties of the chamber allow for it to be easily cleaned and to easily monitor the animals.

Small dimensions of the apparatus are preferred such as to reduce the behavioral possibilities of the animal and allow it to quickly find its way into the other compartment and enter it without hesitation.

The apparatus can be equipped with a video monitoring system paired with the Noldus EthoVision© XT software. The sound cue and footshock generators can also be automatically controlled.

The purpose of the passive and active avoidance tests is to evaluate learning in rodents in a control vs. disease model/intervention group, by assessing their fear-based conditioned avoidance behavior.

There are several versions of protocols to be used with the passive and active avoidance tests, varying in the apparatus used for the test, for example. Here, we describe a general protocol to be used with a shuttle box apparatus.

Pre-training for the passive and active avoidance tests

The apparatus should be placed in a soundproof or quiet room to minimize external noise during the tests; animals should also be housed in a different room. This prevents the animals that are not being subjected to a test from hearing any vocalizations from the animals being tested. Soundproof chambers can also be purchased from MazeEngineers.

Animals should be calm before the test, since too much fear or stress interferes with avoidance acquisition. Therefore, it is recommended that the animals have a long habituation period, so that they become familiarized with the room in which the test is carried out and with the apparatus.

The shock must have an intensity that prevents freezing or disoriented running and jumping, but that is sufficient to adequately motivate the animal to avoid it. (between 0.05-1.5 mA, but the adequate intensity should be established in preliminary trials).

In the passive avoidance test, one of the chambers of the shutter box is illuminated and the other is dark.

The mouse or rat is carefully placed into the illuminated chamber facing away from the dark chamber (start position); this should always be done in a standard way.

A single trial is performed. The animal is carefully placed in the start position.

As soon as the dark chamber of the shutter box is reached with all four paws, a foot shock is applied for 1 sec.

The animal is then immediately returned to its home cage.

The time from releasing the animal in the starting position to its stepping into the dark compartment (step-through latency) is measured.

Learning can be tested at different times after acquisition by presenting the animal to the same paradigm.

During retention testing, most animals remain motionless in the light chamber. Only some explore the entrance to the dark compartment. Almost all animals reach the 3 min cut-off limit.

In the active avoidance test, chambers of the shutter box are similarly illuminated. Multiple conditioning trials are required for the animal to acquire active avoidance behavior. It usually takes 10—20 trials before the first avoidance reaction appears.

The animal is allowed to explore the apparatus for 5 min with the connecting door open and the compartment lights switched off.

The guillotine door is closed. After 20 sec the light is switched on in the compartment containing the animal, and the door is raised (CS).

Five seconds later, the foot shock (US) is applied and left on until the animal escapes to the dark side of the box.

Immediately after the rat enters the dark compartment, the connecting door is closed and both the US and CS are discontinued.

After a variable inter-trial interval (30—90 sec), the light is switched on in the previously dark compartment, the door is raised and the animal is required to cross to the other side to avoid the foot shock.

The training is continued until the animal reaches a criterion run of 9 avoidances in 10 consecutive trials (for example).

For each trial, the escape or avoidance latency is measured.

Retention can be tested at different times after acquisition by presenting the animal to the same paradigm.

The escape or avoidance latency is measured in consecutive trials separated by a variable inter-trial (30—90 sec) interval, until the criterion run is reached (similar to the learning phase). In this case, results may be presented as escape/avoidance latencies throughout trials.

Alternatively, the same number of trials (in blocks of ten) can be performed in acquisition and learning. In this case, results may be presented as the number of avoidances in 10-block trials.

Avoidance behavior also develops in the absence of any external CS, as long as the unconditioned stimuli are applied at regular intervals (Sidman avoidance; Sidman, 1953). In this paradigm, passage of time or time-related stimuli serve as the CS. The door is left permanently open and both chambers are dark. Whenever the animal crosses from one side to the other the fixed inter-trial interval (60 sec, for example) is reset. The US is only applied when the animal fails to make a response within this interval.

More sophisticated paradigms may require the animal to perform a particular reaction (pressing a lever, standing up, squealing, running a certain distance) which prevents onset of the US and switches off the CS.

The data obtained from the passive and active avoidance tests is generally visualized by graphing the latency to avoid the aversive stimulus.

For the passive avoidance test, results can be presented by graphing the average avoidance latency for each experimental group. 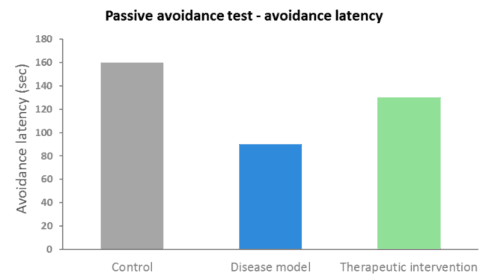 If the same number of trials is performed in acquisition and in the retention test, results can be graphed as the number of avoidances in 10-block trials.

Using graphs similar to these allows to compare the avoidance behavior between different disease or treatment groups and their effect on learning.

The main limitation of the passive and active avoidance tests is their sensitivity to a stressful environment or handling. This can be overcome by minimizing stressful factors. For example, animals must be disrupted as little as possible when moving them in and out of the room or the testing apparatus; the apparatus should be placed in a soundproof or quiet room to minimize external noise during the tests; animals should also be housed in a different room to prevent them hearing any vocalizations from the test; variations in sensory stimuli must be avoided as much as possible and tests should be performed always at the same hours.

All product(s) is defined on a PO or List Price for nonregistered users. Please inquire about bulk order discounts. To view our SAM, or FBO credentials please contact us for our CAGE code and DUNS number. MazeEngineers products are NOT designed for human consumption, testing, or clinical utilization. They are designed for pre-clinical utilization only. Customers purchasing apparatus for the purposes of scientific research or veterinary care affirm to adherence to applicable regulatory bodies for their country in which their research or care is conducted.
Close Menu
<script type='text/javascript' src='https://conductscience.com/maze/wp-content/themes/salient5.5/salient/js/buil