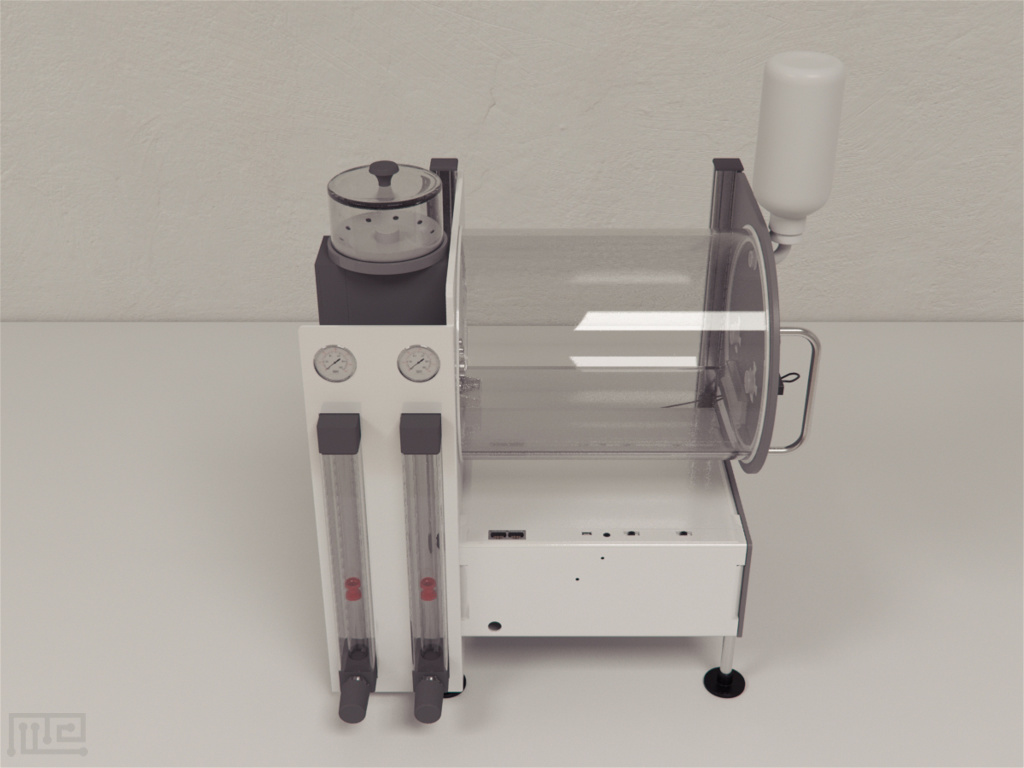 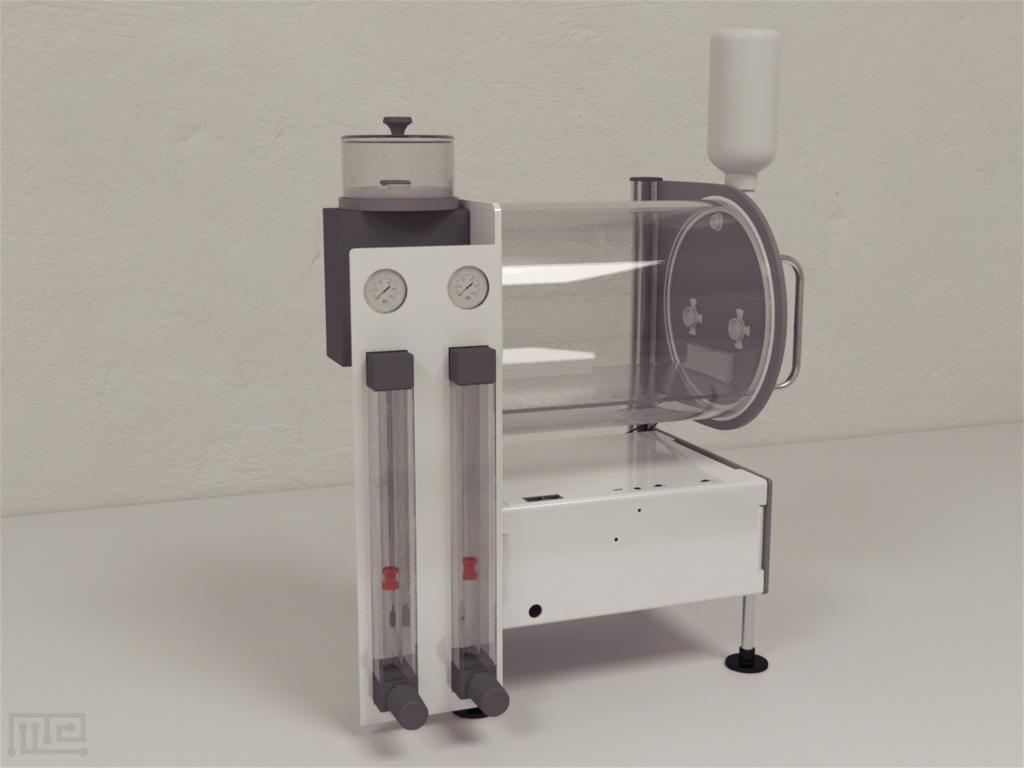 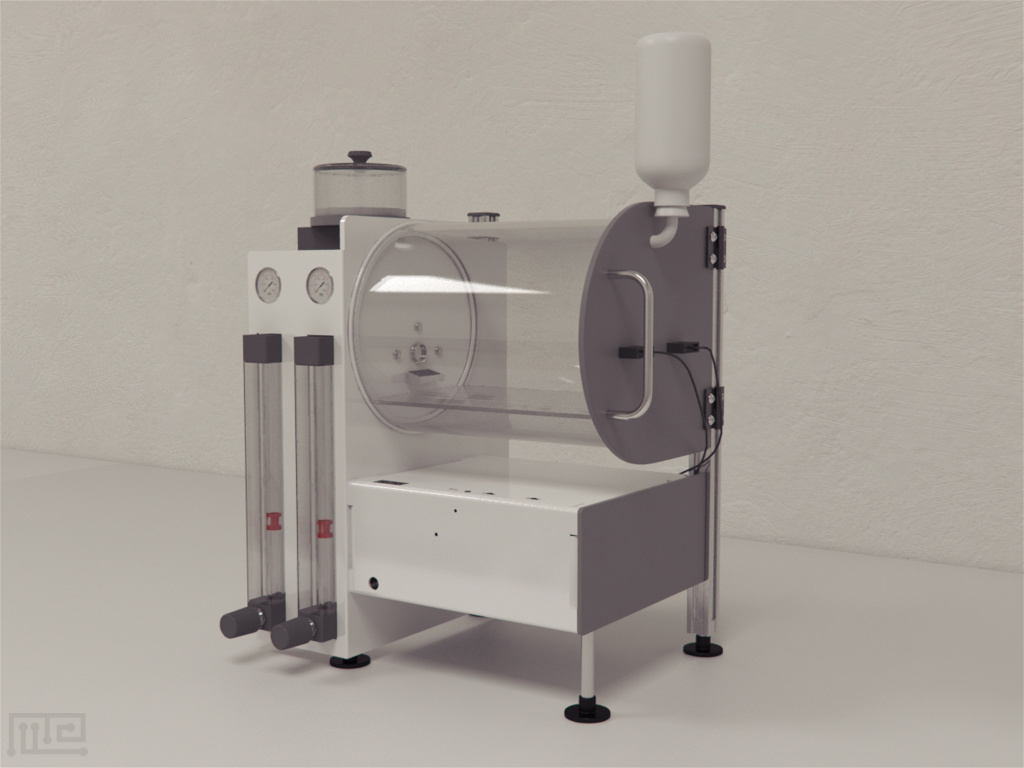 The AeroDelivertm system is a noninvasive, high-throughput, and valuable toolkit for the study of nicotine addiction, toxicology, teratogenicity and tobacco-related diseases in rodents.  The system employs nose-only and free-moving nicotine exposure devices that deliver alveolar region-targeted aerosol to rodents. The system enables controlled drug delivery via nose-poke or lever pressing. The aerosol delivery system produces safe and stable levels of drug vapors in the air with minimum equipment requirements, enabling the researchers to model behaviors of drug dependency by noninvasively delivering the test substances in aerosol form to rodents.

The aerosol delivery chamber allows control over the amount of the aerosols entering the systemic circulation and the brain of the test animal. The AeroDelivertm system solves the problem of difficult administration routes for rodents by giving rodents access to substance vapors in individually controlled small chambers. Also, the system provides a flexible approach to accommodate multiple deliveries and dosage regimens in the same cohort of rodents. The AeroDelivertm system allows access to the animals while they are exposed to drug vapors, which also permits the administration of test compounds and sampling of biological fluids without disturbing the drug concentration and environment. The size and easy handling of the vapor chambers allow them to be used in any laboratory space. The method is not labor-intensive for research personnel and only requires minimal training. It can also be used for longer experiments (weeks to months) without stressful manipulations (e.g., injections or pump implantation). This system is valuable for use in both rats and mice, with the only difference being the size of the chambers.

one device
Request an AeroDeliver System

The AeroDelivertm system consists of a collision nebulizer that can consistently emit aerosols having specific size distribution profiles, two air flowmeters with valves for monitoring and regulating the inlet airflow rate and pressure applied to the nebulizer, and one air pressure gauge. The system also includes nose-poke-operated food and drug administration systems. The data obtained from the aerosol delivery system is analyzed by using the CageCentertm software with two pre-programmed modes of aerosol delivery:

The pressurized air is supplied from the air source of the laboratory facilities. The air pressure generating the aerosol through the nebulizer determines the flow, the droplet size distribution, and the concentration of the output aerosol. The outlet of the nebulizer is opened to a sealed exposure chamber, i.e., a plastic cylindrical tube of 19.7 cm inner diameter (ID) and 25.4 cm long with a platform that holds rodents. The exposure chamber mimics a home-cage environment where the rodent can freely move during prolonged research manipulations. The aerosol flow rate and the air pressure are continuously regulated during the experiments to ensure controlled and stabilized drug delivery.

The software measures three parameters to assess the toxicity, teratogenicity, and pharmacological dynamics of the drug used. These parameters are Elapsed time, Aerosol events (open and close), and Food administration events.

Note: For experimental accuracy, put one rodent into the sealed cage at a time.

Lung alveolar region-targeted aerosol technology was used by Shao et al. to deliver nicotine to rodents. In the method, the nicotine aerosol concentration and the duration of its exposure controlled the dose of the delivery and stabilized it to the required levels for accurate pharmacokinetics. The rats were exposed to nicotine aerosol for 2 min. The results suggested that the aerosol delivery system is a noninvasive, and valuable toolkit for rapid delivery of a controlled amount of nicotine into the blood and the brain of the rodents inducing dose-dependent pharmacological effects, even at the lethal dose. The aerosol technology can produce nicotine kinetics in both arterial and venous blood resembling human smoking. The AeroDelivertm system can be used to investigate the effects of chronic intermittent nicotine exposure, nicotine addiction, toxicology, tobacco-related diseases, and for the testing of novel drug candidates.

Nicotine potentiates brain stimulation reward, increases locomotor activity, and provokes conditioned place preference in rodents. It is the most significant addictive component of the tobacco. The nicotine vaporizer or nicotine aerosol delivery system is a SmartCageTM modular device that allows the experimenter to induce the experience of tobacco smoking without inhaling the smoke. The device is designed to be an alternative to conventional cigarettes that emit vaporized nicotine inhaled by the user. The study was designed to develop a procedure to achieve blood nicotine levels in rodents clinically relevant to those that are observed in humans and produce dependence. Kallupi and George applied the aerosol delivery system to deliver nicotine vapors in a stable, reliable, and consistent manner, as well as for the analysis of the vaporized air for nicotine content. The aerosol delivery technique is a noninvasive, high-throughput technique that simulates the intermittent aspect, duration, and route of administration of e-cig exposure in humans. The study validated that the nicotine vapor system produces reliable and stable levels of nicotine vapor in the air with minimum equipment requirements.

The research was conducted to develop a smoking-relevant nicotine exposure device. Shao et al. developed an aerosol delivery platform interfacing computer controlled program to expose the freely moving rodents to episodic nicotine vapors in a user-designed time-frame. The system can characterize the vapors generated in the breathing zone of the rodent exposure chamber. The droplet size distribution was within the respirable diameter range of the test animal. The system enables the researchers to generate a wide range of nicotine concentrations in air, meeting a variety of experimental needs. The nicotine levels and circadian patterns achieved in the experiment resembled the pharmacokinetic pattern of human smokers. The AeroDelivertm system can expose the unanesthetized and unrestrained rodents to chronic intermittent nicotine exposure eventually leading to circadian blood pharmacokinetics resembling human smokers. The results validated that the aerosol delivery system is a valuable and novel tool for the assessment of rodent’s behavior, pharmacology and toxicology of chronic nicotine exposure, nicotine addiction, tobacco-related diseases, teratogenicity, and for the discovery of potential therapeutic agents.

Strengths and Weaknesses of the AeroDeliver System