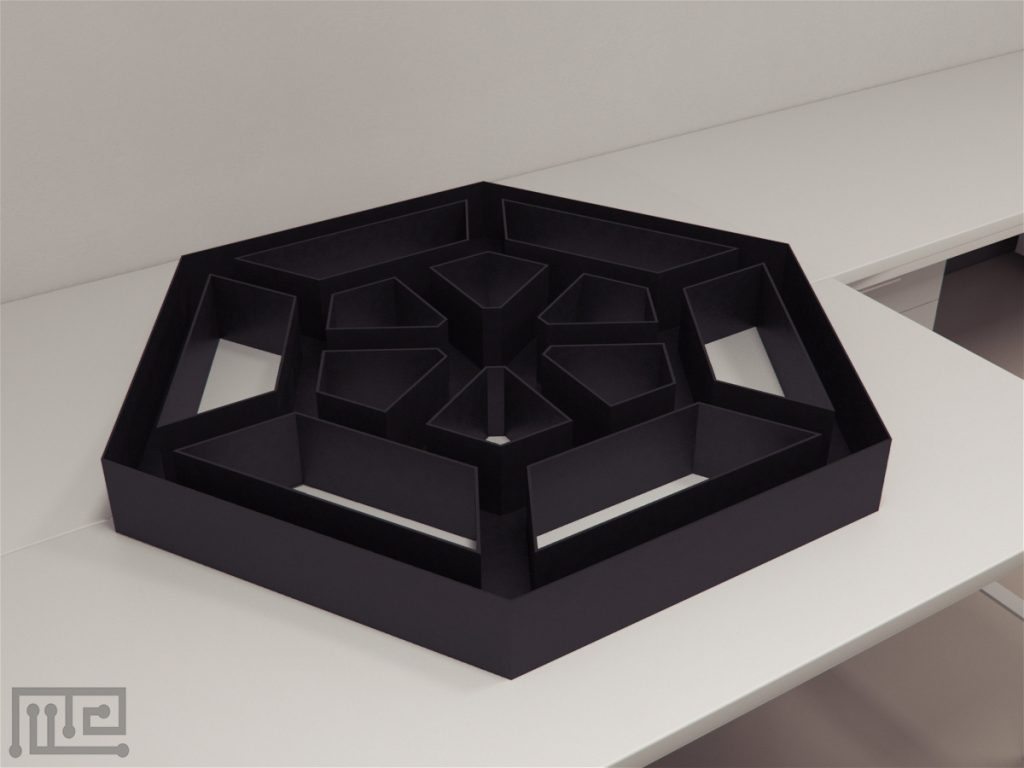 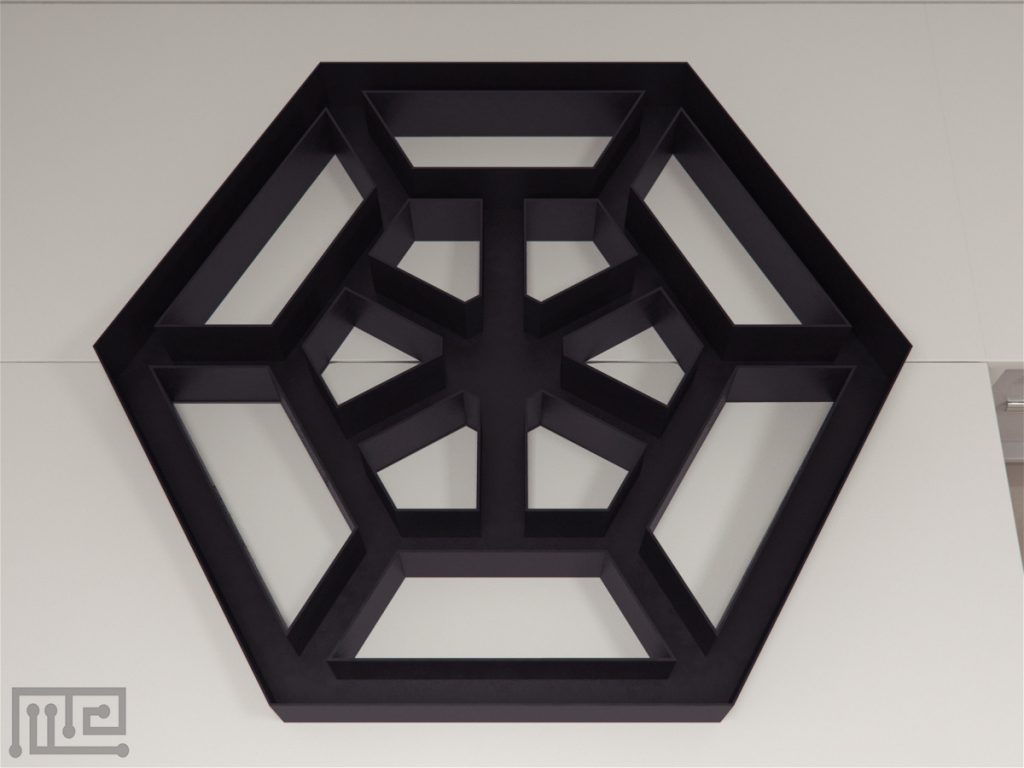 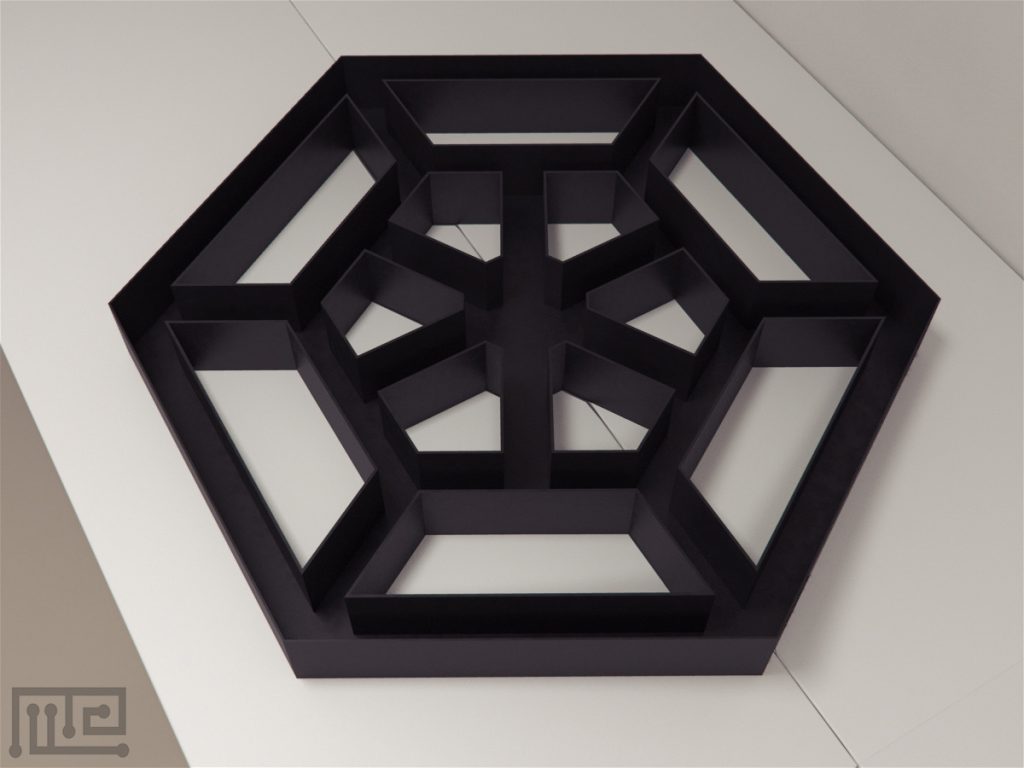 The alley maze was created in an experiment carried out by Battig et al. (1976) to assess exploratory behavior in rats.

Six alley configurations were obtained by intersectioning a complex hexagonal maze with barriers.

Mazeengineers offers the alley maze for both mice and rats. Custom coloring and customization  are available upon request.

The Alley Maze is used to study both exploratory and locomotory behavior in rodents. The conventional hexagonal maze is modified by introducing six alleys of varying length, and intricate structural geometry. The concept of Alley Maze was introduced by Uster, Bättig and Nägeli (1976) to study the exploratory behavior of rats in a probing environment which involved neither physiological rewards nor punishment during the task. The Alley Maze involves radial and hexagonal alleys, movements in which are based upon the learning and exploratory characteristics of the subject. The Alley Maze can also be used for the evaluation of different unconditioned behaviors such as risk assessment and cognitive skills.

Repeated stress, brain lesions such as hippocampal lesions, and drug testing alter the behavior and motivation of the animal to explore new environments. The brain lesions and drug-based studies conducted on animals such as rodents helps to reveal the factors linked with neuropsychiatric disorders and their treatment by repeated drug testing. Additionally, the Alley Maze can be used to assess effort-based decision-making, physiological impairments and genetic factors leading to decreased behavioral activity in animals.

The Alley Maze is hexagonal in shape with the six alley configurations achieved by intersecting the complex hexagonal maze by using barriers. The introduction of barriers results in the formation of hexagonal and diagonal alleys of different area units.  The Alley Maze can be modified by installing automated guillotine doors to control the environment of the experiment. Additionally, visual and other cues can also be added to the maze to adapt it to different experiment requirements. The other apparatus also used to measure exploratory, and learning behaviors in rodents include the six alley maze, the Y-Maze, and the T-Maze.

The Alley Maze is a hexagon shaped apparatus consisting of concentric, interconnected alleys created using barriers. The apparatus has a width of 8cm and a height of 15cm. The barriers create 6 alleys each generating 42 area units of varying lengths, number of corners and radial and hexagonal alleys. The maze can be equipped with photocells to record locomotion of the subject.

Remove the traces of food or other impurities such as urine and feces from the floor of the maze. Ensure the maze is thoroughly cleaned prior to trials to avoid interference from any lingering stimuli on the maze performances. Appropriately illuminate the maze arena. For automatic tracking and recording the animal activity, a system such as the Noldus EthoVision XT can be used.

Prior to the experiment, acclimatize the subjects to the maze by placing them in the defined start area of the complete (not inter-sectioned) maze. Allow the subjects to explore the maze for 2 minutes.

At the start of each run, place the subject into a definite area unit of the middle or outer hexagonal alley. Remove the subject from the maze after 6 minutes of exposure and wipe the maze floor with a wet sponge. Repeat this step once a day for six successive days. Replicate the testing procedure after a break of 2 days and record the readings.

Uster, Bättig, and Nägeli (1976) evaluated the effect of alley complexity and experience on rats exploratory as well as locomotory behavior. A total of 36 naïve Wistar male rats were categorized randomly into 6 groups and evaluated in 6 different alley maze configurations of varying complexity. The rats showed an overall increased locomotion activity in straight alley sections. The activity was decreased as the structural complexity increased at alley branches and corners and reached the lowest level at re-entry positions from radial side alleys into a hexagonal alley. As the experience increased qualitative changes in locomotion was observed, and locomotion became less stereotyped. In general, less stable speed, less liking for outward leading alleys and abating forward tendency at reentry from side alleys into hexagonal alleys was observed. However, the total activity remained roughly unchanged. Lastly, the interactions between both experience and the stimulus content of the maze acted as important factors for elevating locomotion complexity.

Evaluation of emotionality and activity in rats

Fernández-Teruel, Escorihuela, Driscoll, Tobeña, and Bättig (1994) evaluated the activity and emotional reactivity of 240 Roman high and low-avoidance rats aged 30 days in a hexagonal tunnel maze. Subjects of both sexes were divided into the following treatment groups: no treatment (control); postnatal handling (handled twice daily from postnatal day 1 to postnatal day 21); perinatal vehicle treatment (mothers received, from gestation day 15 to the 14th day after giving birth, a solution to drink containing ethylene glycol plus water); (4) postnatal handling plus vehicle treatment; perinatal flumazenil treatment (mothers received flumazenil administered in their drinking water from gestation day 15 to the 14th day after giving birth) and postnatal handling plus flumazenil treatment. The hexagonal alley maze had its central area brightly lit, and the alleys were not blocked by any barriers. The Roman low avoidance rats defecated more than Roman high avoidance rats. However, Roman high avoidance rats had a higher number of entries into the illuminated central arena than the Roman low avoidance rats. A significant reduction in defecation and increased entries into the illuminated central area was observed in the group that was subjected to postnatal handling.

The following parameters can be determined using Alley Maze

The Alley Maze provides a complex and intricate maze environment to evaluate exploratory and locomotory behaviors in rodents. The maze design offers the opportunity to create different configurations by removal of barriers or inclusion of guillotine doors; this modifiability of the maze enables application of different investigatory protocols in addition to manipulating the difficulty level of the maze. The maze can also be used to evaluate neural process involved, effects of pharmacological manipulations and brain lesions on subject’s exploratory and learning behaviors. It can also be extended to evaluate learning and memory performances of disease models and other treatments.

The presence of unnecessary constraints such as auditory, olfactory and visual cues can affect the performance of the subject. The complexity of the maze can prove difficult for the animal to learn and memorize. The task is dependent on proper training and familiarization of subject to apparatus. Age, weight, size, speed and exploratory drive of the subject influence the overall task.