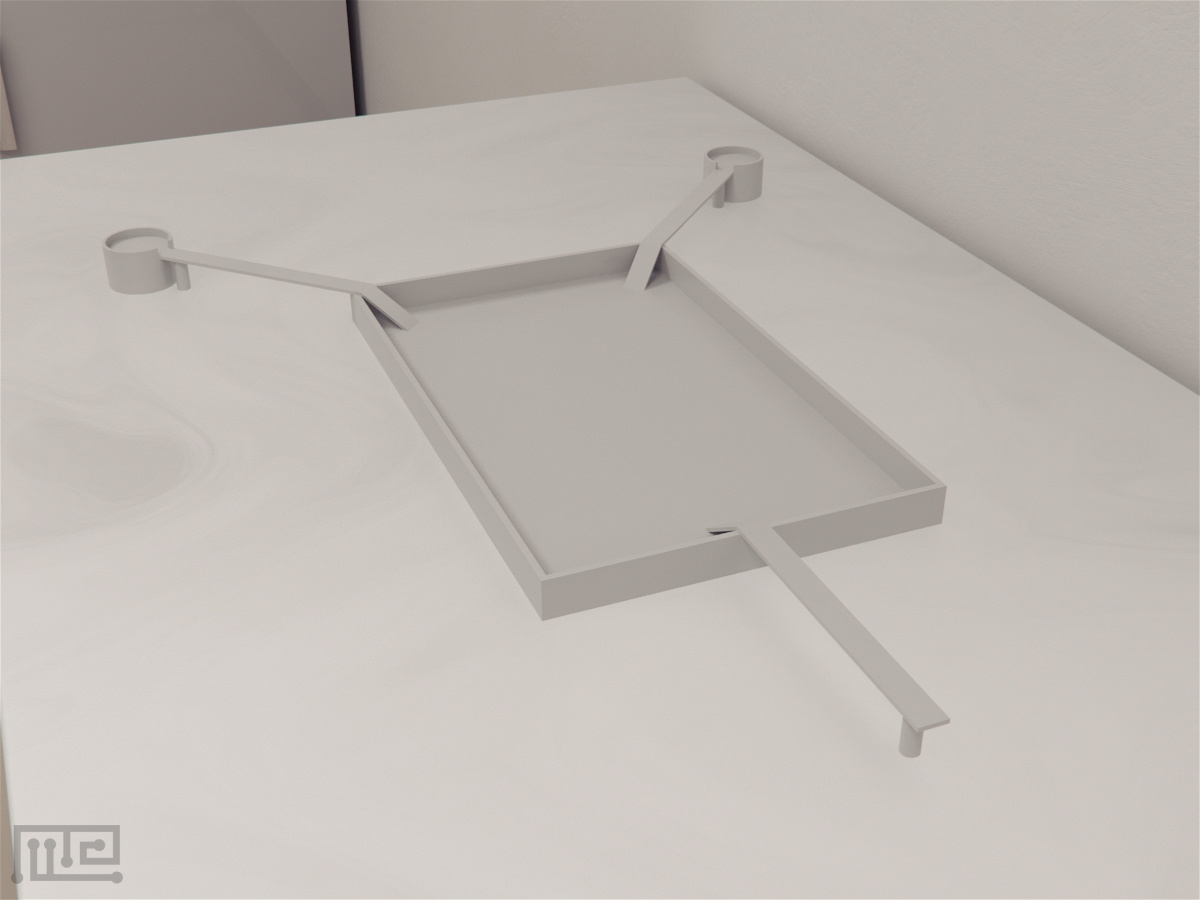 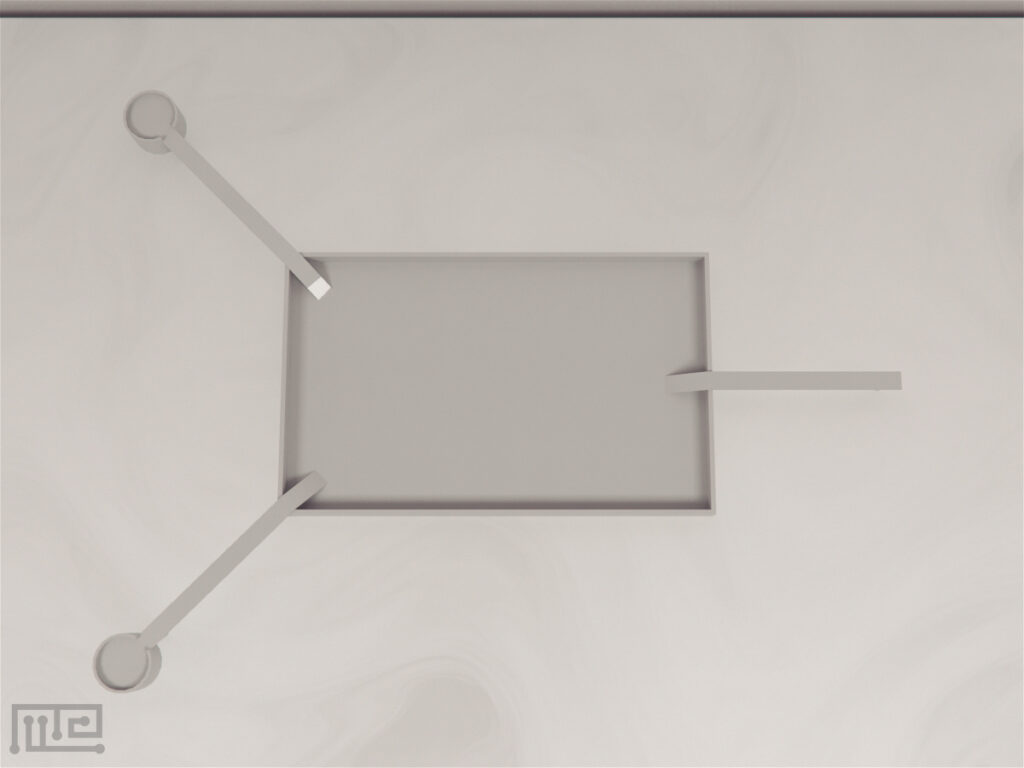 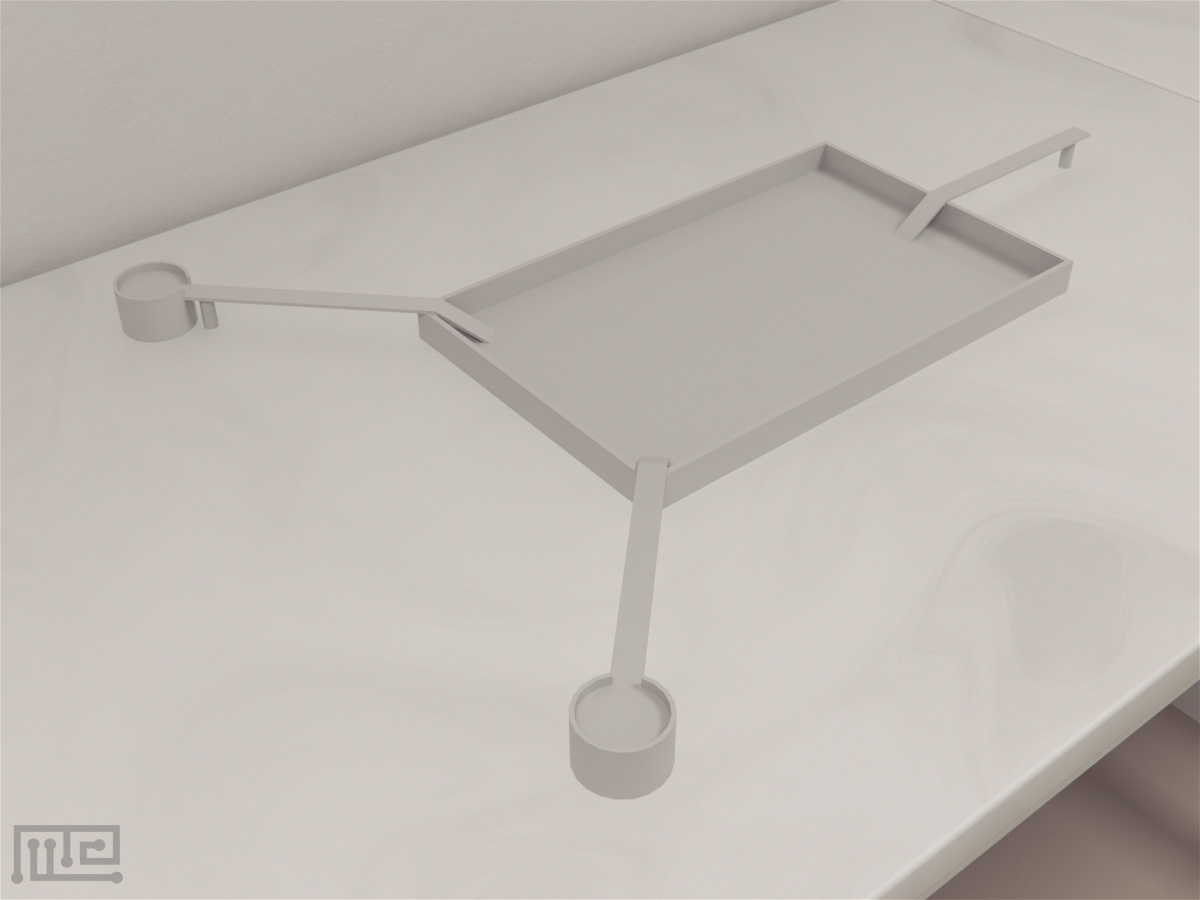 The Ant sucrose feeder is used to analyze the effects of private and social information on the decision-making of ants during foraging. The apparatus provides multiple food choices to the subjects and test their ability to differentiate between the two sources.

The apparatus consists of a rectangular platform. One of the shorter sides of the platform is linked to two feeders on either extremity through bridges. Each feeder is circular. The feeders are provided with a platform to hold food source (such as sucrose solution). The opposite side of the feeder side is provided with a bridge for ants to enter the apparatus.

The Ant sucrose feeder is used to analyze the effects of private and social information on the decision-making of ants during foraging. The apparatus provides multiple food choices to the subjects and test their ability to differentiate between the two sources. The ant sucrose feeder can be manipulated to challenge the ants to rely either on route memory or pheromones only.

The feeding activity of ants highly depends upon the quality of the food source with better quality sources resulting in the production of more pheromones that produces a positive feedback response and increase ant’s recruitment. However, if ants are introduced to a poor feeder before the good feeder, switching between the feeders becomes difficult due to the strongly established pheromone trail. The ant sucrose feeder can be used to create this trapping effect to analyze the decision-making of ants in terms of memory, spatial recognition, and trail-following behavior.

Navigation memory and pheromone trail play a vital role in foraging of ants. Pheromones deposition help in mass recruitment of ants leading towards the food source. Mostly, when ants encounter a conflicting situation between route memory and pheromones trail, a higher number of ants prefer to follow route memory (Grüter, Czaczkes, & Ratnieks, 2011). The ant sucrose feeder can be used in food choice experiments to test the individual factors affecting the collective behaviors of ants when challenged with both public and private information.

The ant sucrose feeder is a simple apparatus consisting of a rectangular platform linked with feeders containing food source. The platform is covered with a paper that acts as a substrate for pheromone deposition. Other apparatus used for assessing memory, learning, and decision making in ants are Ant Y Maze, Ant Double Bifurcation T, Ant T Maze and, Ant Binary Tree Maze.

The apparatus consists of a rectangular platform measuring 28 cm x 43 cm. One of the shorter sides of the platform is linked to two feeders on either extremity through 2 cm x 21 cm bridges. Each feeder is circular and 5.5 cm in diameter. The feeders are provided with a 3 cm x 3 cm platform to hold food source (such as sucrose solution). The opposite side of the feeder side is provided with a bridge for ants to enter the apparatus.

In order to increase subject motivation, keep the subjects starved for 4 days prior to the test. Remove the papers covering the platform and feeder sites used in pretraining before starting the trial. Clean the apparatus with ethanol to remove any traces of pheromones at the start and end of each trial. Replace the previously used card bridges with new ones. An external tracking and recording systems such as Noldus Ethovision XT can be used with the ant sucrose feeder for observing the ants’ behavior.

Place fresh papers on the platform and the feeder sites. Place a few drops of the 0.5 M sucrose solution on right side feeder sheet and 1 M solution on the left side feeder. Record the ants’ movement towards both feeders’ sites after every 2 minutes for 30 minutes. After 30 minutes bring all the ants back to the nest. Perform two trials for each colony using both feeder sites.

Evaluation of private information in the trapping of ant colonies

Czaczkes, Salmane, Klampfleuthner, and Heinze (2016) investigated the effect of social and private information on decision making of ants. The Lasius niger ants were used as subjects and divided into eight colonies. The ant sucrose feeder was applied in creating three different experimental setups: The ‘pheromone removed’ treatment was created by cleaning all the apparatus with ethanol and using new sheets and bridges to eliminate previous pheromones’ trail. The ‘memory and pheromone remain’ treatment was created by reusing old paper overlays without cleaning the apparatus.  In order to obtain ‘memory removed’ treatment, two fragments of ant colonies were used wherein one acted as pheromone trail donor for 15 minutes and later replaced with follower group in the next phase of the experiment without changing the paper overlays. The ant sucrose feeder was used to test the path preference and decision-making ability of the ants using 0.5 M and 1 M sucrose solutions. Results revealed that a higher number of ants preferred the route towards poor food source (0.5 M sucrose solution) in all three experimental setups due to route memory (private information) overcoming the acquired social information.

Beckers, Deneubourg, Goss, and Pasteels (1990) studied the trial recruitment in ants during foraging for two different food sources. The Lasius niger and Tetrarium caespitum ants were used as subjects. Two different concentrations (0.1M and 1 M) of sucrose solutions were placed in sucrose feeders for analyzing the collective decision making in ants. L. niger ants were tested under two conditions; in the first condition, the ants were provided with 1 M solution in both feeder sites while in second condition 1 M source was provided 50 minutes after 0.1 M source. On the other hand, the T. caespitum ants were introduced with 1 M sucrose after a 60 min exposure to 0.1 M sucrose solution. Results showed that for the same concentration solutions ants preferred to explore one site more and keep the other as a reserve. When different sucrose concentrations were provided simultaneously, ants preferred the rich source (1 M). However, when 0.1 M sucrose was introduced before 1 M source, a higher number of ants exploited the poor source due to the well-developed trail. The trend to follow the well-developed trail to the poor source was only observed in the Lasius niger. The Tetrarium caespitum ants eventually managed to redirect to the rich source by taking advantage of individual transmission of information.

The ant sucrose feeder is used for the evaluation of both private and social information acquired by the ants. It is a simple apparatus and is easy to maintain. The apparatus requires minimum handling and experimenter interventions during the experiment. The device has various applications in assessing the role of route information and memory in the decision-making ability of ants. It can also be used as an effective tool to study the role of pheromones in trial recruitment and foraging. The ant sucrose feeder can be applied to find out the effects of food source quality on ants’ foraging activity.