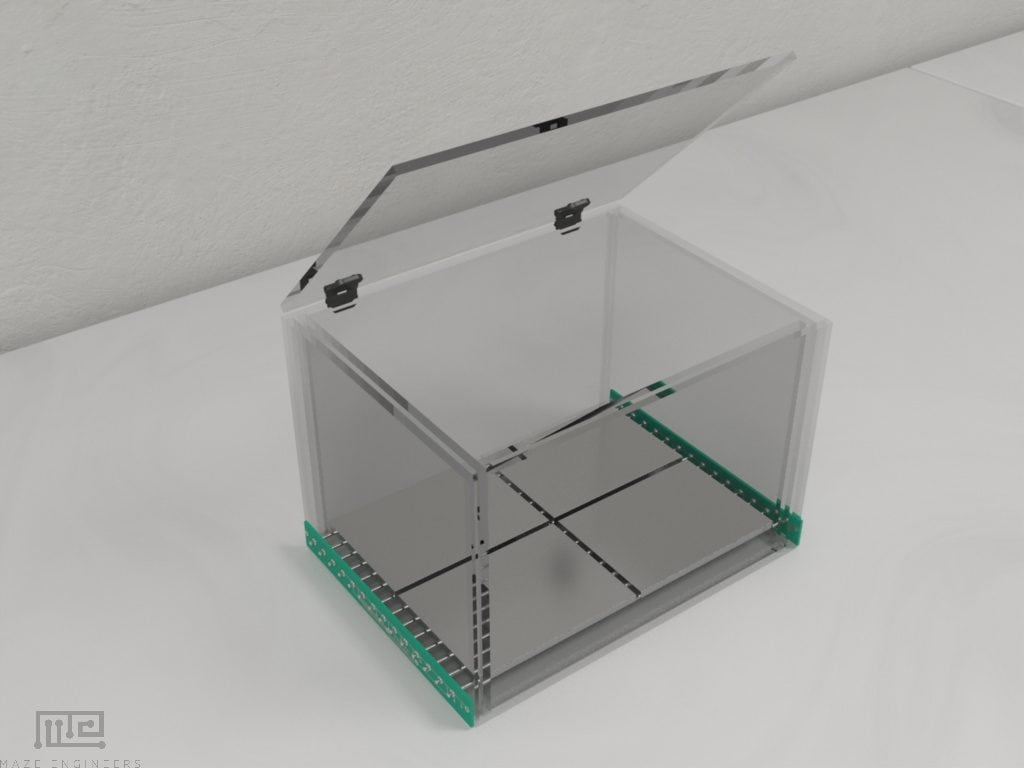 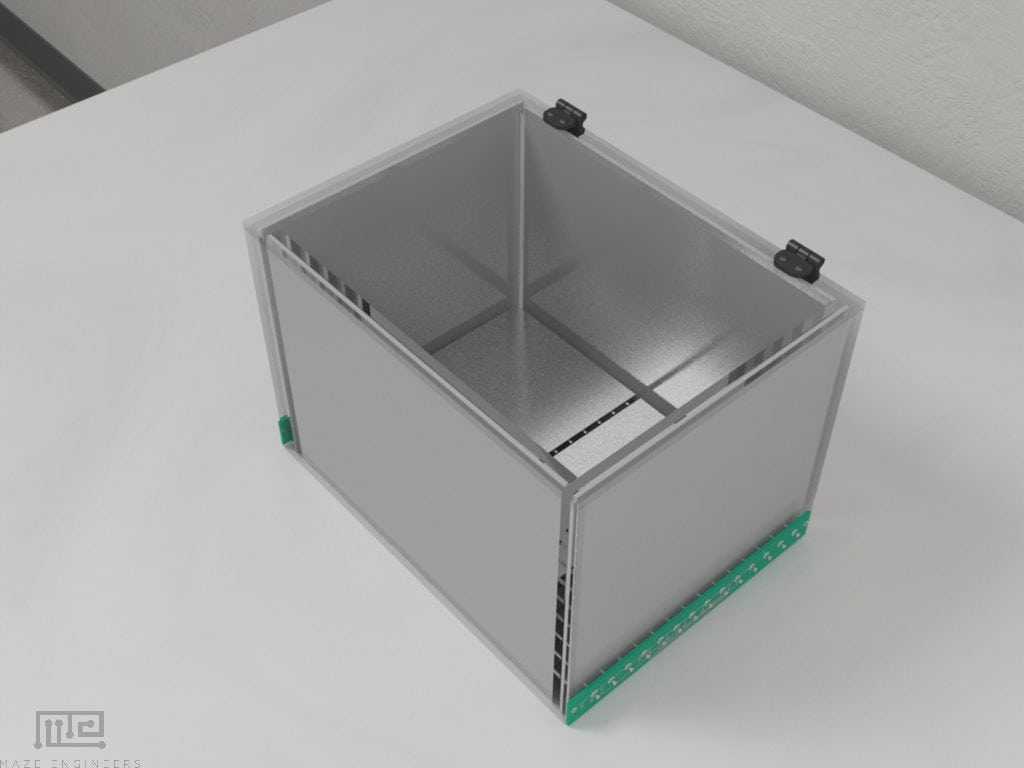 Aron’s test is an elegant yet simple and economical solution for testing the effect of anxiolytic drugs in mice and rats. Mild electric foot shocks cause punishment while rodents attempt to explore their novel environment. The MazeEngineers 4 Plate test allows for shock at highly discriminatory doses in 4 separate quadrants at your control. Data is collected with our Conductor Software. Your order comes with an easy to open lid.  Interchangable walls can be included in your order.

The Aron test or four plates test (FPT) is an animal model of anxiety based on spontaneous response (Aron et al., 1971). The test animal is introduced to this novel environment i.e. the cage where the exploration of it is suppressed by the delivery of a mild electric foot shock contingent to quadrant crossing. The only way to averse the shocks is to stay motionless on any one of the quadrant steel plate. The FPT is based on passive avoidance where mice must stop moving to avoid electric foot shocks (Boissier et al. 1968). This test represents a model of conditioned fear and has the advantage of being a simple procedure.

The anti-nociceptive system has been reported to be activated by a variety of stressful stimuli such as footshock. Drugs like anti-depressants, Benzodiazepines (BZDs,) pain-relieving drugs (morphine) and other non-BZDs can either alleviate or reduce anxiety level as well as pain sensitivity level. The FPT test is an excellent model to observe and determine those drugs’ effect and its level on animals like rodent before human testing. Also FPT test can offer both quantitative as well as qualitative picture on the different way these drugs react when the dosage, area of injection and environment condition are varied.

It is a simple, ready-to-start yet very effective procedure. Following habituation period, the animal is subjected to an electric shock when crossing (transition) from one plate to another, i.e. two legs on one plate and two legs on another. The number of punished crossings is generally calculated for a period of 60 s (Dunham and Mya 1957). For example, a substance with anxiolytic properties induces an increase in the number of punished passages.

The Aron Test apparatus is a white plastic cage of 18 x 25 x 16 cm dimension, with a transparent Perspex lid on top for preventing escape behavior in the test animal. The floor of the cage has four identical rectangular metal (steel) plates of dimension (8×11 cm), separated from each other by a 4mm gap. These plates are connected to an external device that can generate electric shock i.e. footshocks.

The shocker unit can generate square pulse of an intensity anywhere between 0 – 3 mA for a variable period of 0-10 sec. It needs to be handled manually.

For this test, Male Swiss mice (Janvier, France) (weighing on average 20 ± 2 g on the day of the study) were used in the original study, but any commonly used strain including C56BL/J can be used. Mice are typically housed in groups of 18 for a minimum of one week prior to experiments in plastic cages (44 cm × 30 cm × 17 cm) on 12:12 light/dark cycle and at a constant ambient temperature of 21±1°C and 50% humidity.

Depending on the requirement, the animal (mice) can be chosen to be naive or experienced (– if submitted to the test 24 hour previously) or both. The experimental groups are typically composed of 8-12 mice.

After a short period of habituation with the apparatus (15 seconds), the subjects receive electric shocks every time a plate is crossed.

The number of plates crossed by the subjects is recorded for a 1-minute test period. (Dunham & Mya 1957).

The testing procedure is divided into two separate sessions, namely test or session 1 and retest or session 2. The retest is performed 24 hours following the test.

The results obtained from the test and retest in a mouse are compared to assess the overall performance of the mouse.

Saline or drug treatment should be administered via intraperitoneal route half an hour before the test/retest.

An alternative method is to divide subjects into two groups. During test/session 1, only saline treatment should be given. For the retest/session 2, both the saline or drug treatment can be given.

Like Method 1, Saline or drug treatment should be administered via intraperitoneal route half an hour before the test/retest.

Evaluation of the relationship between Benzodiazepine receptor and passive avoidance acquisition

The FTP apparatus can be used to assess the relationship between Benzodiazepine receptor and passive avoidance acquisition.

Two Benzodiazepines classes are studied relatively to investigate the learning behavior and lack of anxiolytic efficacy during retesting/session 2 in the four plate task.

Evaluation of BZD versus Non-BZD

The four plate test protocol can also be used to discriminate BZDs from novel anxiolytic classes such as SSRIs in pretested mice.

Numerous drugs such as paroxetine, venlafaxine, atropine, flumazenil, and DOI can be evaluated with the help of the FTP paradigm.

The significant modification was the utilization of heat plates which served as aversive stimuli instead of electric shocks.

Hot plate test was designed to counter the perplexed results obtained from the four plate test with DOI effect.

The environment, dosage of drugs, injection points and test span can be altered as per requirement and test objective.

Data obtained from the Aron or FPT test is generally visualized by graphical plotting of the number of punished passage or crossings in one minute against various drugs. 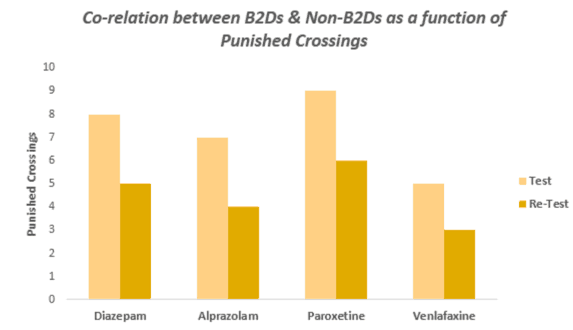 It is evident from the above graph that all the drugs fail to decrease the levels of anxiety in the subjects during retesting. The possible reason may be the passive avoidance acquisition in subjects.

It is a simple test that can be easily modified as per objective, makes it an effective anxiety and anti -nociceptive response tester for drugs.

The four-plates test (FPT), has the advantage of allowing the detection of anxiolytic effect not only of BZDs, but also of other non-BZDs anxiolytic compounds such as SSRIs (Hascoët et al. 2000).

It helps distinguish between modification of pain-tolerance level or induction of anxiolytic effect due to certain drugs.

FPT allows mice to acquire passive avoidance behavior in situations where certain drugs do not have an effect on memory.

FPT coupled with other anxiety tests like hot-plate test offer insight into working pathways of neurotransmitters for pain and aversive mechanism.

Except DOI, BZDs and anti-depressants (paroxetine and venlafaxine) exerts opposing effect in naïve and experienced mice under FPT test.

Prior experience of FPT reduces or abolishes the anxiolytic efficacy of BZD receptor agonists like other anxiety test model.

The modified FPT is unable to distinguish the anxiolytic effect of BZDs from that of paroxetine or venlafaxine (anti-depressants).

Masse, F., Petitdemouliere, B., Dubois, I., Hascoet, M., & Bourin, M. (2007). Anxiolytic-like effects of DOI microinjections into the hippocampus (but not the amygdala nor the PAG) in the mice four plates test. Behavioral Brain Research.