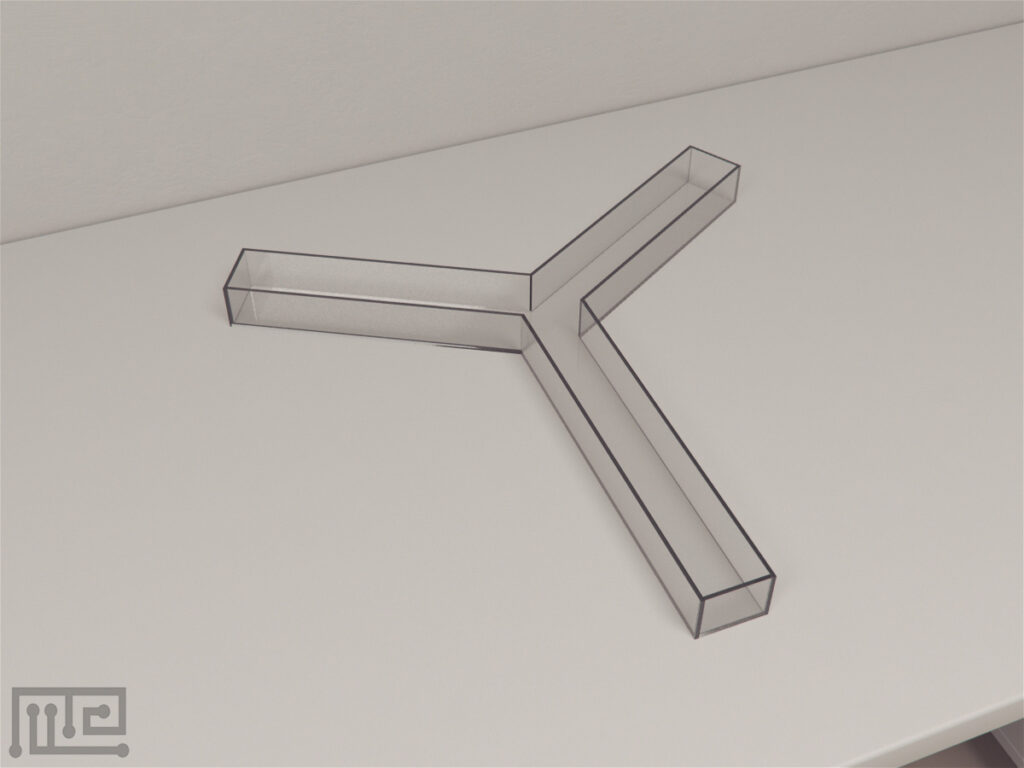 The Bat Y-Maze which is shaped like a capital Y was used in an experiment by R.J. Kilgour et al. (2013), to assess social preference in bats.

In the experiment, an individual “focal” bat was selected and permitted to move freely within a plexiglass Y-maze, with isolated (caged) “stimulus” bat conspecifics placed at either end of the Y. Stimulus bats were held at the end of each arm of the Y-maze in stainless steel wire-mesh cages. Clear lid prevents flight.

Based on data from the experiment, it was found that some bats show a preference for certain group-mates over others.

Mazeengineers offers the Bat Y-Maze for replication as well as custom coloring and customization upon request.

The bat Y-maze is used to study spatial learning and memory in bats. It is an adaptation of the conventional Y-maze that is used in rodents in which the three arms of the maze are joined together, forming a capital ‘Y’ shape. The bat Y-maze employs the basic decision-making protocol in which the subject is tasked to choose between the arms of the maze following its memory or exploratory traits.

Bats display a wide range of behavioral patterns for roosting, foraging, seeking hibernacula, and caring for their young (Fenton 1985; Guthrie 1933; Davis & Hitchcock 1965).  The bat Y-maze provides the opportunity to observe these exploratory and social behaviors in bats. The choice arms of the maze can hold different odor cues or rewards. Wire mesh cages can be attached to the choice arms ends to hold stimulus bats. The choice arms can also be modified in terms of lighting by having a lit and a dark arm. Additionally, the bat Y-maze also provides the opportunity to test the effects of diseases and disorders, brain lesions, and drugs on learning and memory behaviors.

The bat Y maze can be modified by having each forked arm equipped with stainless steel wire-mesh cages (24 cm x 21 cm x 19 cm). Fans can also be placed in the arms to control the dispersion of olfactory cues in the maze.

Clean the maze between trials with a mild soap solution. Appropriately light the maze. A tracking and recording system such as the Noldus Ethovision XT can be used to assist with observations.

Allow the subject to freely explore the un-baited bat Y-maze for 90 minutes.

Kilgour, Faure, and Brigham (2013) evaluated the social preferences of female big brown bats (Eptesicus fuscus) with specific group mates on a bat Y-maze. Eight bats were used in the experiment with each bat serving as a focal individual per trial. Two randomly selected bats out of the remaining seven were chosen as stimulus bats and placed in cages at the end of the two choice arms. It was observed that the focal bats were active and displayed interest in the stimulus bats during trials, and none of them displayed nonresponsive behaviors. The time spent near each conspecific differed among the focal bats with four spending a greater amount of time in the presence of one stimulus bat despite randomizing the location of the stimulus bats. However, the other four spent an equal amount of time near each stimulus bat. Of the three individuals that were used as the stimulus bat in more than one trial, no repeated preferences for that individual were observed by the focal individuals.

De Fanis and Jones (1994) conducted two series of experiments on a bat Y-maze in which female pipistrelles bats from two colonies (colony A and colony B) were tested. The animals were presented with two odors using scent swabs from donor bats. In the first experiment, the bats were trained to distinguish between odors from two different individuals of the same colony (A) and these experiments were replicated by using five different scent-receiver bats. Different donors were used for each receiver with a total of 10 donor bats. Each scent receiver was given 20 choice trials per day. It was observed that each of the bats from colony A achieved the 75% threshold for correct choices during the experiment. After 12 days, all bats displayed 100% of correct choices except for one female that displayed 95% of correct choices. In the second experiment, the bats were tested if they could distinguish between the odor from an individual of their own colony and the odor from an individual of the other colony. Five scent-receiver bats from each of the two colonies were used. It was observed that only 20 trials on a single day were enough for all of the bats to discriminate between the scents from a member of their own colony and a bat from a different colony. Every bat favored the scent from its own colony on the first trial, and this choice was subsequently reinforced.

Evaluation of individual recognition between mother and infant bats

Turner, Shaughnessy, and Gould (1972) evaluated whether individual recognition occurs in the little brown bat (Myotis lucifugus). Thirteen mother-infant pairs were tested on a bat Y-maze using 20 trials. Two mothers were randomly placed in a holding box in the choice arms, and the infant had to recognize its mother based on auditory communication. It was observed that infants chose their own mothers 15 times, and the alien mother 5 times, which showed that individual recognition did occur. However, it could not be determined whether the recognition was based on ultrasonic communication or olfactory stimuli.

Evaluation of ultraviolet vision in bats

Gorresen, Cryan, Dalton, Wolf, and Bonaccorso (2015) tested whether wild-caught bats could see reflected UV light and whether this capacity functions at the dim lighting conditions experienced by night-flying bats. A total of 512 individual bats of seven species (Macrotus californicus, Myotis lucifugus, Myotis velifer, Myotis Volans, Eptesicus fuscus, Corynorhinus town sen dii, Tada ri da brasiliensis) were used in the experiments performed on a bat Y-maze. A pair of lamp assemblies were centered distal to the bifurcation of the bat Y-maze and each assembly incorporated a UV light-emitting diode. Before starting trials, one of the choice arms was randomly illuminated with UV light (treatment) while the other remained dark (control). Results indicated that the mean observed proportion of bats selecting the illuminated choice arm of the Y-maze ranged from 0.64 to 0.90. Bats from all species exhibited a positive phototactic response to UV illumination, with a greater number leaving through the lit than dark arms. It was observed that these seven species of bats had sufficient visual capacity to respond to subtle light in the ultraviolet spectrum behaviorally.

Mistry (1990) evaluated the visually guided escape response of the Mexican free-tailed bat (Tadarida brasilensis mexicana) in relation to acoustic and visual cues, time of day, light intensity and age on a bat Y-maze. Forty Lactating female bats were tested. One arm of the maze was kept dark while the other was illuminated by a cave lamp. Acoustic cues were controlled using a clear Plexiglass gate placed at the end of either arm.  The arms could have any of the following combinations: light/open, dark/open, light/closed, dark/closed. It was observed that the adults chose the lit arm when presented with the choice of light/open and dark/closed and showed a marked preference for the open arm when presented with the choice of light/closed and dark/open. Results indicated that bats used acoustic cues preferentially over visual cues. When tested for their circadian rhythm response, the bats exhibited a statistically significant orientation towards light throughout the day except at 0530 hours and 0730 hours. Five levels of light intensities ranging from low light intensity found at the back of the cave (0.17 lx) to the bright level near the entrance (350 lx) were used to test for the bat’s response. It was observed that bats showed a significant preference for low light intensity and showed a strong preference for the lit arm at 0.17 lx and 1.4 lx.  Pups of three age groups (young non-volant, older non-volant, and volant) were tested for their light response. The young non-volant pups and the older non-volant pups showed a significant preference for the dark arm. However, the volant pups, like the adults, showed a preference for the lit arm.

The following can be observed on the bat Y-maze:

The bat Y-maze is used to study spatial learning and memory in bats. The two choice arms can be used to evaluate different behavioral responses in bats and can be modified according to different investigatory needs. The choice arms can hold odor cues or rewards as well as be modified by incorporating wire mesh cages at the ends. The behavior of bats in response to light can also be evaluated through the insertion of lamps or bulbs in the choice arms. Modifications can also include insertion of guillotine doors. The bat Y-maze can also be used to test the effects of diseases and disorders, brain lesions, and pharmacological manipulations on learning and memory. It allows for easy acquisition and interpretation of data.

Presence of trailing cues from previous trials may affect the task. Training of subjects is important while using the bat Y-maze. The subject’s explorative drive is necessary for the completion of the task. Factors such as age, gender, and strain of the subjects may contribute towards their task behavior. Unintentional stimuli may affect the way the subject performs the task.