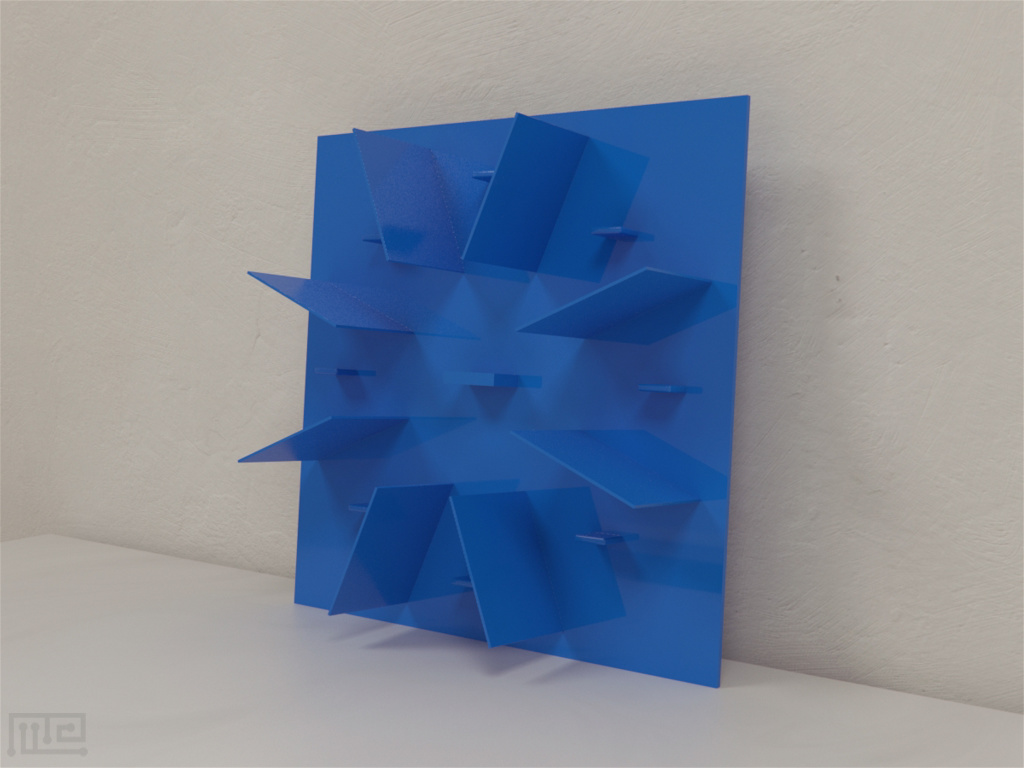 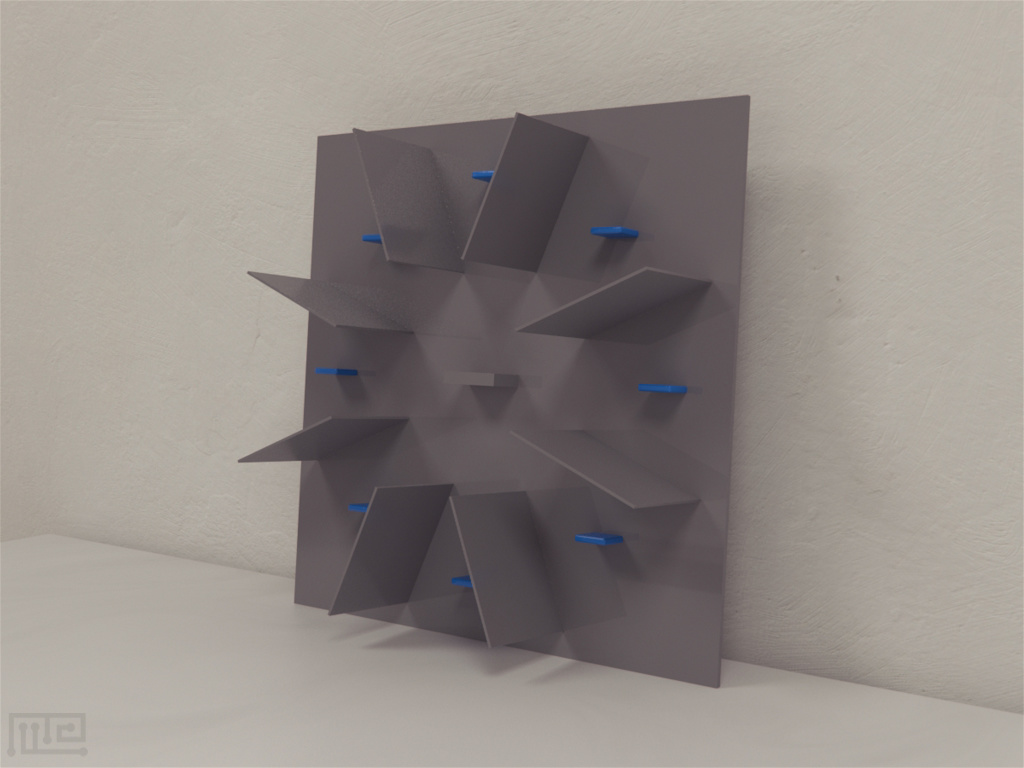 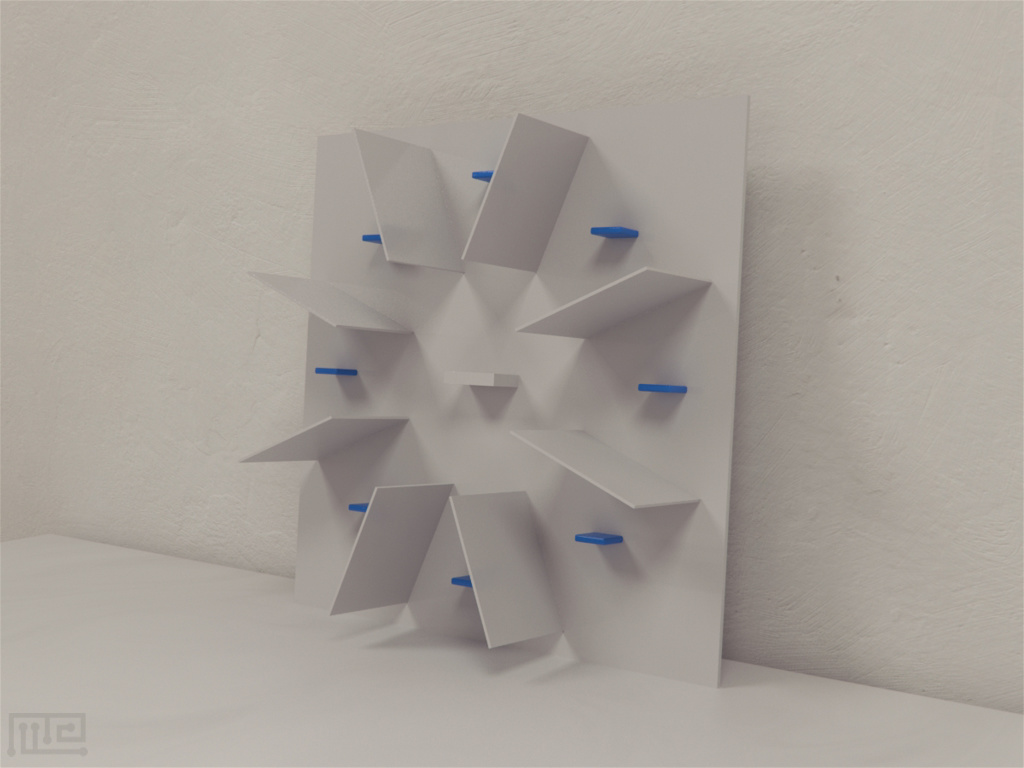 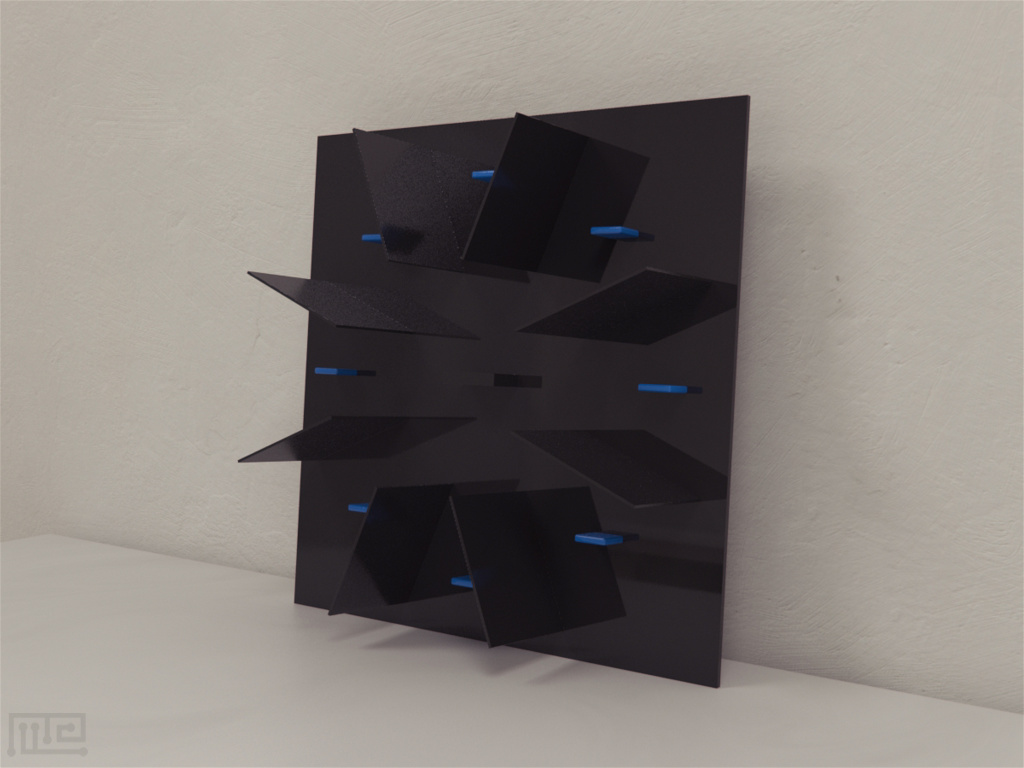 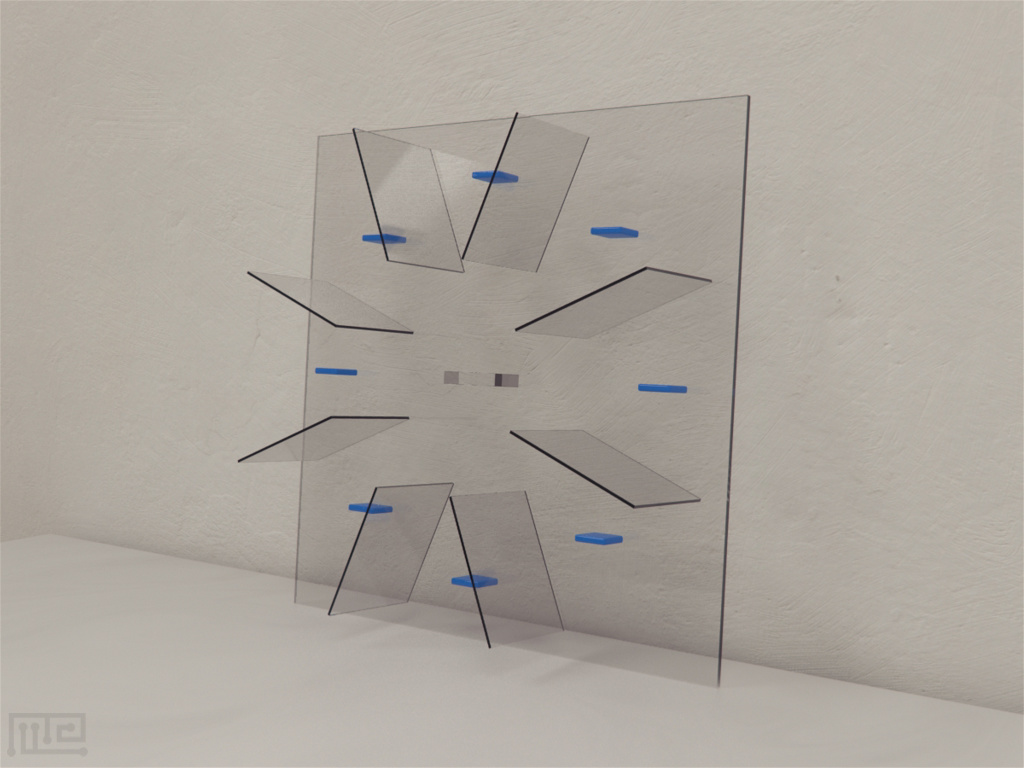 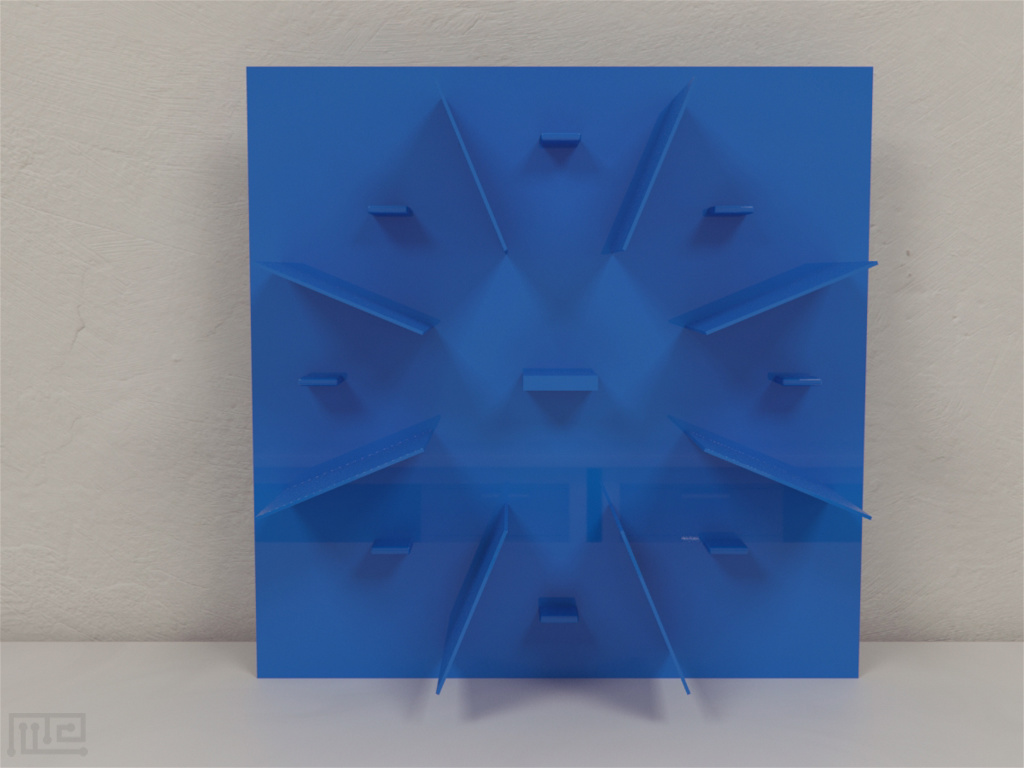 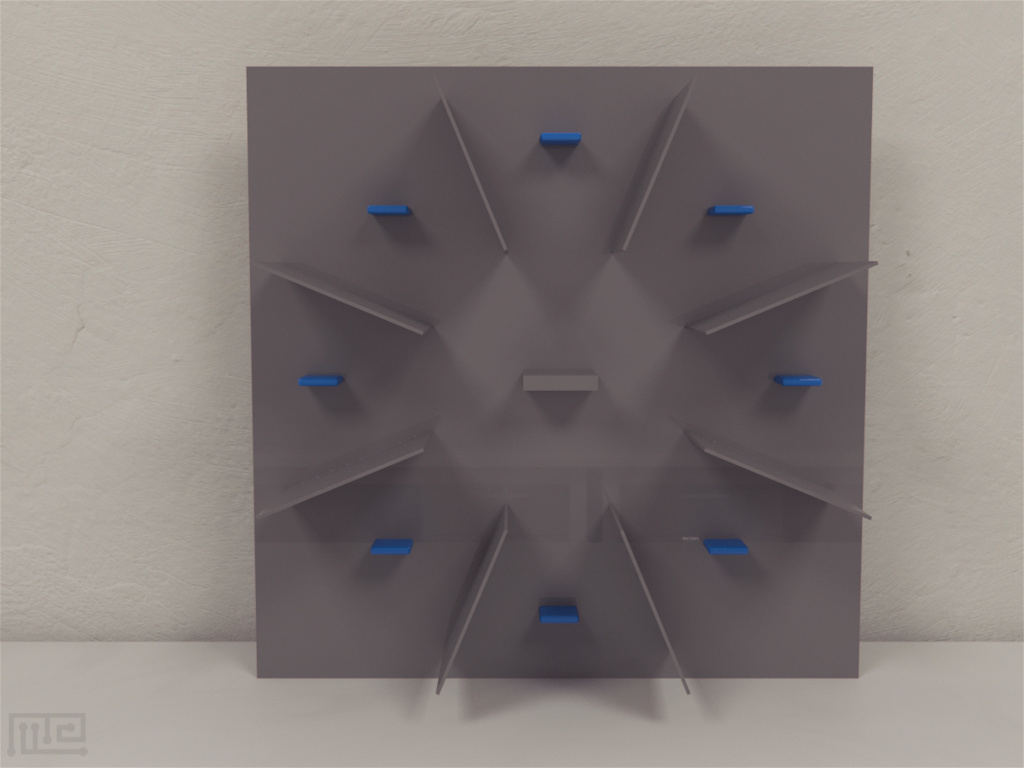 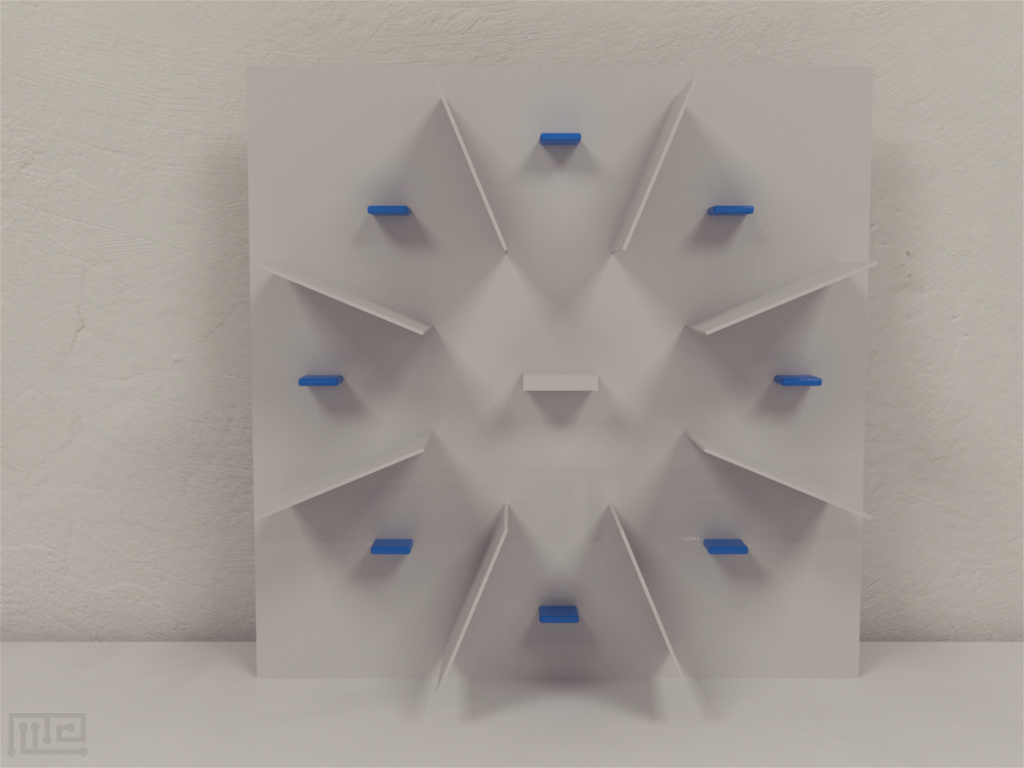 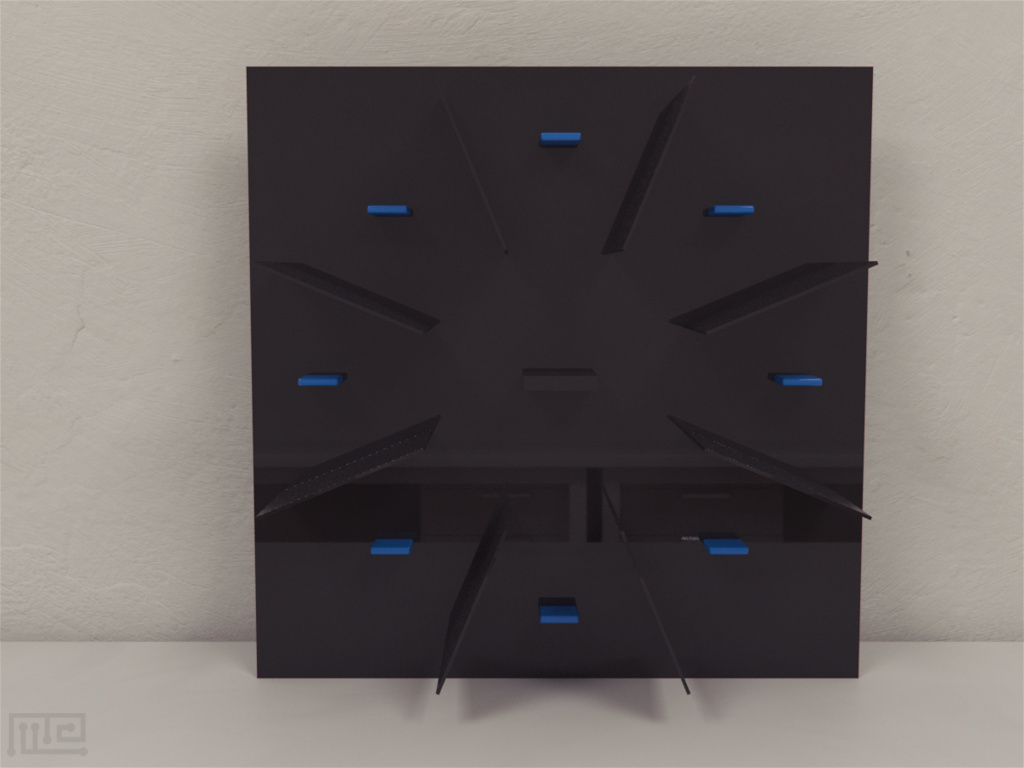 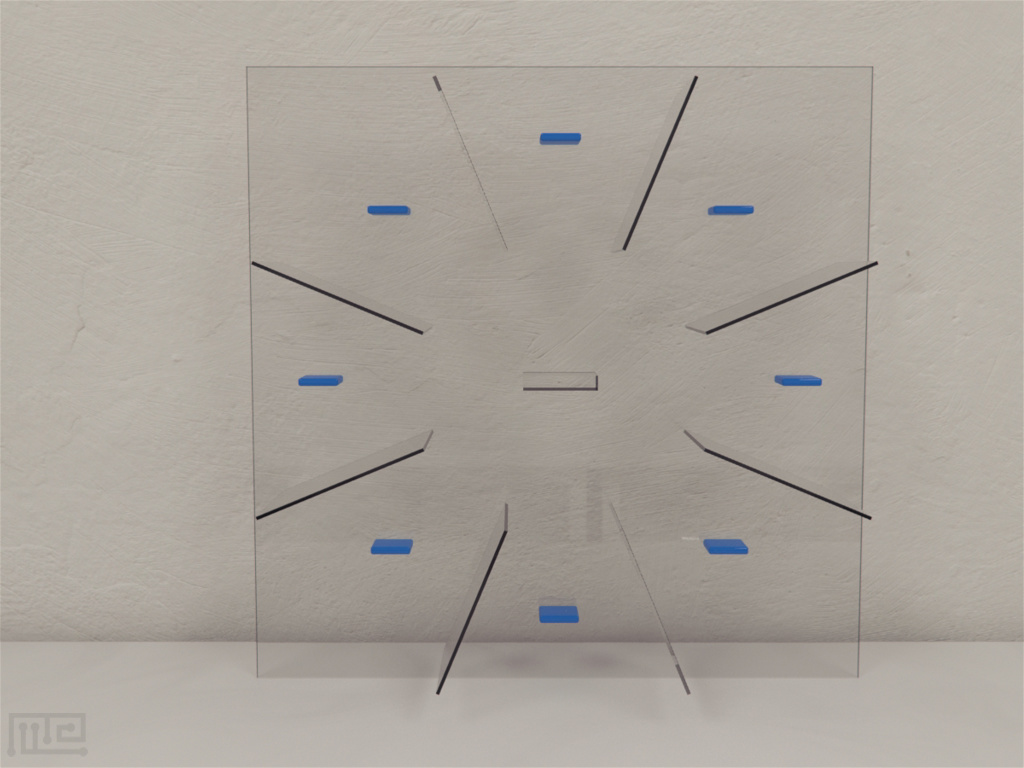 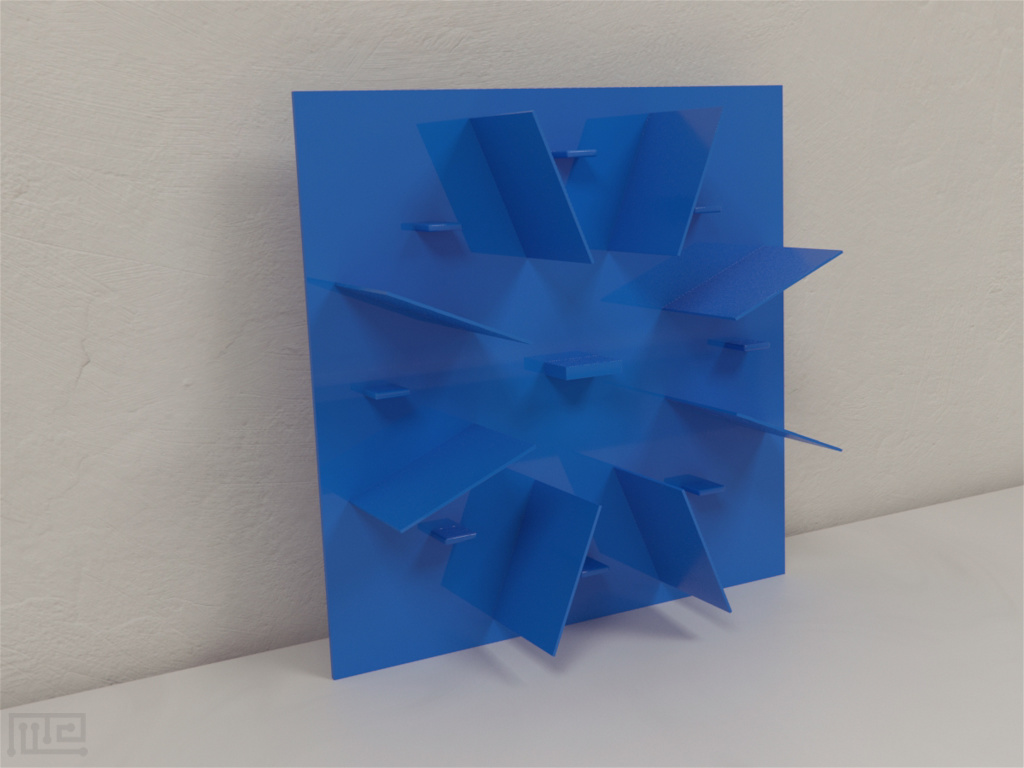 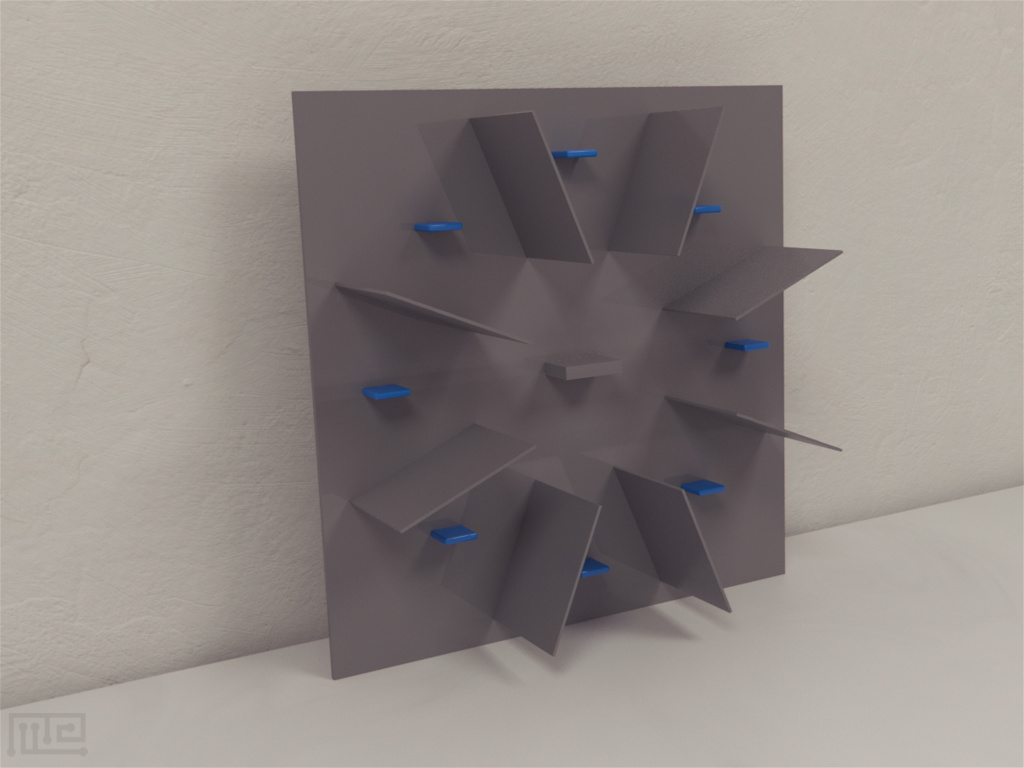 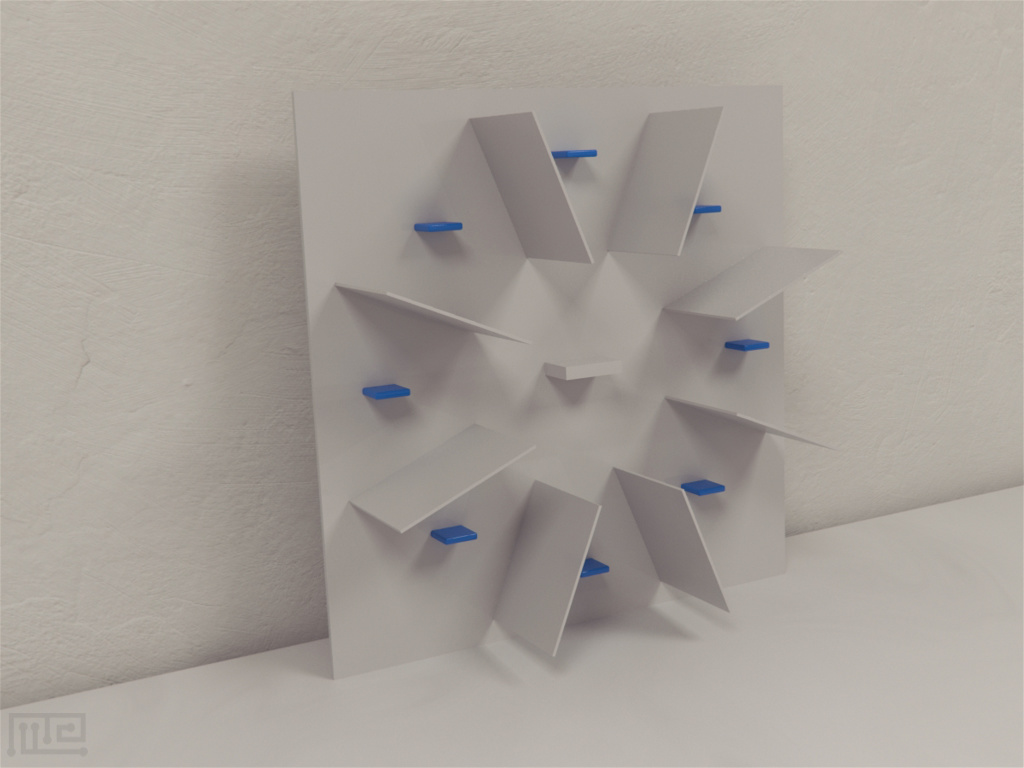 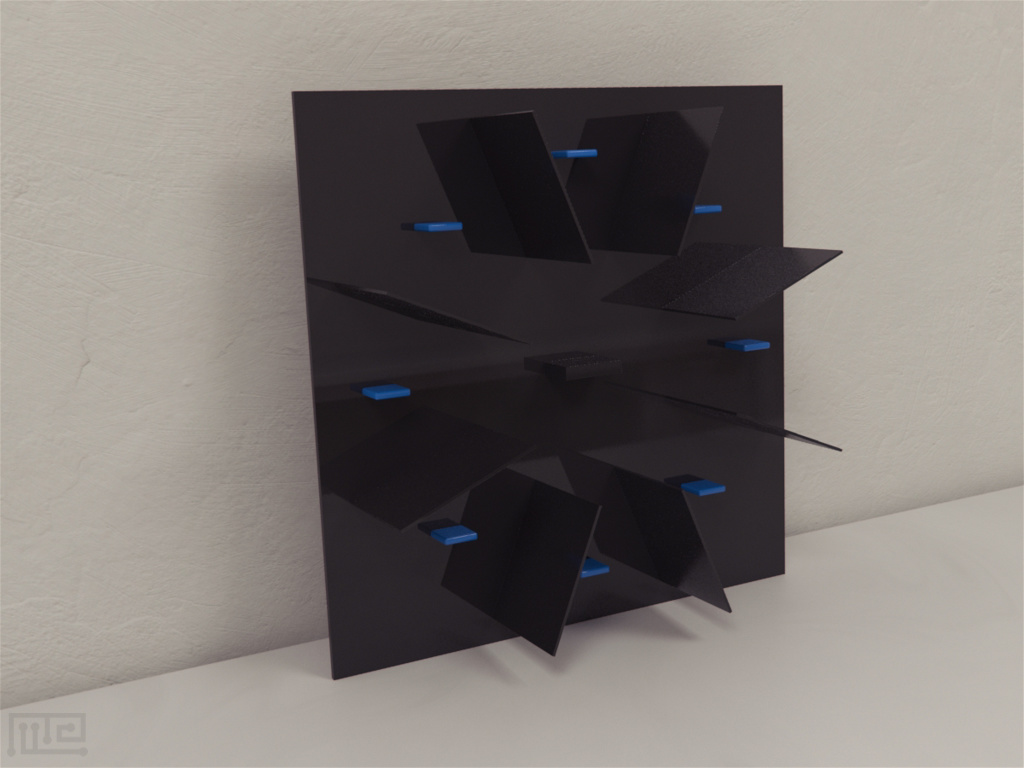 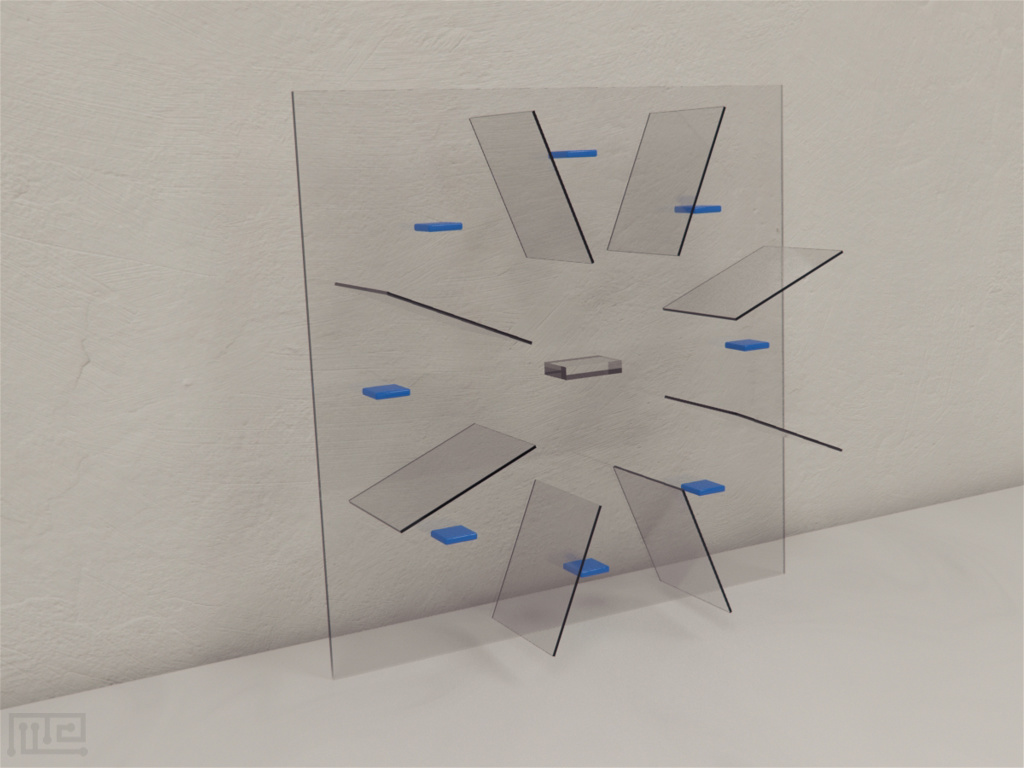 The Bee Radial arm maze (RAM) was originally described as a method to study sublethal doses of insecticide on bee behavior. Spatial working memory is a key cognitive domain for pollen and flower strategy, and this RAM is a novel utilization of the rodent version in Bombus terrestris (bumblebee). The apparatus consists of a circular array of eight artificial flowers on a vertical board with 10×15 cm acrylic baffles between each flower.

Bee Radial Arm Maze is a behavioral paradigm to measure the effects of acute pesticide exposure on the working spatial memory of bumblebees (Bombus terrestris). Working spatial memory is key to successful pollination of flowering plants which in turn depends largely on animal pollinators such as insects. It is therefore important to analyze the stressors affecting bee population, behavior and health.

Bee radial arm maze investigates how pesticides, such as neonicotinoids (thiamethoxam), applied on flowering crops inadvertently harm the cognition of visiting insect pollinators. It mimics foraging ecology and consists of a circular array containing eight reward arms that can be seen from the center. The task requires bumblebees to visit the eight flowers one by one and return to the nest with the help of spatial learning and memory. Spatial memory is assessed before and after pesticide treatment. The goal is to avoid revisiting an already visited reward location.

The Bee RAM is developed by Elizabeth, Zachary, Richard, and Ellouise (2016). It is an adaptation of Radial Arm Maze (RAM).

The experimental arena consists of a circular board containing an array of eight artificial flowers. Each flower is made of three square plastic chips glued together. The flowers can be manually replaced through slots in the board. Between each flower is inserted a wooden baffle (10cm x 15cm x 0.3cm) to circumvent visit from one flower to another.

The eight blue chips serve as a landing platform for bumblebees where the reward is served. Right above each blue chip is a 4mm hole through which a bee can insert its proboscis to obtain a reward.

Keep bees in the wooden nest boxes connected to the bee RAM through a tube allowing controlled entry and return from the apparatus. Ensure that fresh air circulates through the box throughout the day and the room temperature is maintained at 20-25 degrees Celsius. When not training or testing, the bee access to the arena should be unrestricted. The food and water supply should be maintained at all times. Provide pollen pellets every 2-3 days in the nest box.

Prior to testing, group-train bees by transferring them in the bee RAM. Load flowers with sucrose solution and allow free access for one hour. Identify motivated foragers that spontaneously learn to feed on flowers and tag them. Return all bees back to the nesting box.

Replace the already visited flowers with clean, scent-free flowers and reload with sucrose solution. Choose a tagged bee and allow single entry into the arena. The bee inserting its proboscis through the hole marks one flower visit. Record total visits to the flowers. Each bee receives 10 training bouts.

Calculate thiamethoxam doses at the field and non-field realistic exposure so that there are three doses fed randomly to the bees; two sub-lethal and one high sub-lethal positive control. Return the bee to the nest for maximum absorption of the drug without causing motivation delay. After about 45 minutes, return the bee to the arena for the final testing bout and record foraging.

Elizabeth et al. (2016) housed seven colonies of Bombus terrestris in a wooden nest box connected to the foraging area. The bees were provided 43% w/w sucrose solution as they frequented the arena. The bees received an hour-long training each day prior to testing. During this period, they displayed a combination of stereotyped movement rules and spatial working memory to complete the task.

Acute exposure to the high dose had a marked effect on the first two RAM performance measures assayed. Vis-à-vis control and low-dose group, bees in the treated group made fewer correct choices before the first re-visit. This suggested difficulty in remembering which flowers they had already visited.

Pesticide treatment had a major effect in large bees for total re-visits and correct choices in first eight visits. However, there was no significant effect on the last two measures. Moreover, a high dose of thiamethoxam had a marked effect on working spatial memory whereas low dose pesticide produced small but detectable size-dependent effects on the bees. The researchers concluded that untreated bees depicted better performance and working spatial memory. The pesticide had a negative effect on bumblebee spatial memory.

RAM performance is assessed by the following four measures:

Bee RAM is one of the most remarkable tools for studying working memory deficits in bumblebees. It investigates the effects of sub-lethal pesticide doses affecting bee behavior at field levels. The information can help with policy decisions.

The maze allows analysis of bees of varying sizes; ranging from small to big. This way, the researchers can investigate the size cohorts of colonies prone to memory impairment by pesticides.

Bee Ram simulates natural foraging environment; therefore bees feel at home in the arena. No stressors or aversive stimulators like water (Morris water maze) or heat are used to encourage escape or performance. Harrison, Hosseini, and McDonald (2009) have shown that techniques where survival or reward is based on swimming or escaping aversive environ, put undue stress and pressure on the animal affecting its performance. In Bee RAM, food is used as a motivator to gauge performance.

The design of the maze is simple yet clever – although the bees are allowed to explore the maze freely, the wooden baffles limit route choices. The bee is bound to come back to the center after every visit in order to make the next navigational decision. Moreover, the trap doors control the flow of bees in and out of the maze.

Bee RAM assesses almost all aspects of spatial working memory. The results are reliable and reproducible.

Despite the simplicity of design and protocol, the Bee RAM has its disadvantages. For instance, since it is a behavioral paradigm, the activity of bees depends heavily on the correct dosage of pesticide. Manhandling and dosage miscalculation are likely which can not only affect performance but make scores dubious. Such errors can result in over-handling of the bees putting undue stress.

Another typical problem that arises with spatial memory tasks is that animals can employ stereotypical movement rules to locate the target. This involves using strategies other than spatial learning and memory. Bees are known to employ heuristic movement rules (Natasha & Daniel (2018) to make foraging decisions. The task design needs a deeper insight into animal behavior and techniques to capture them all adequately.

Lastly, the task requires the replacement of flowers after every visit in order to remove olfactory cues. This practice is cumbersome and time-consuming.