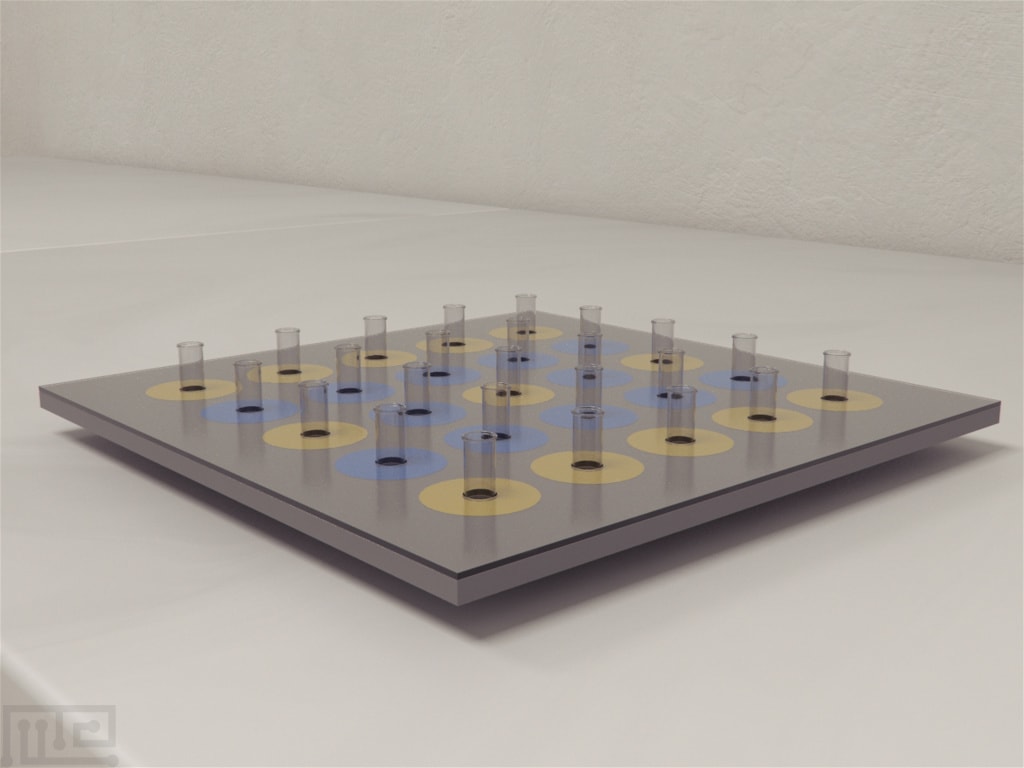 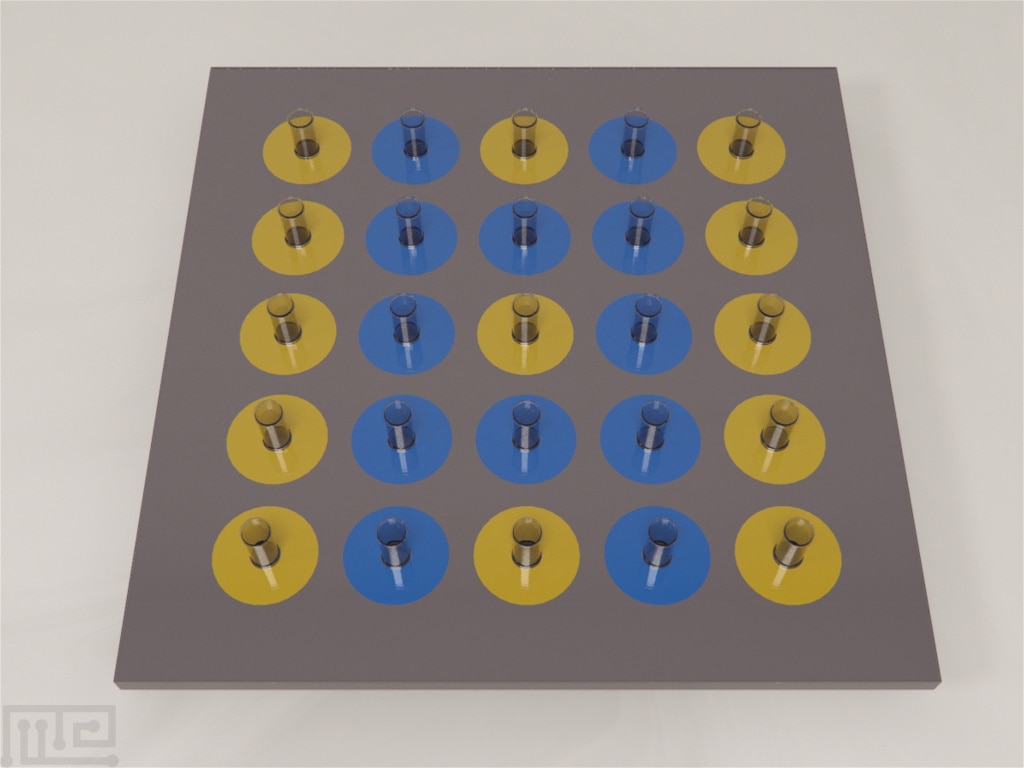 Bees can learn to associate colors with a sugar reward in a setting closely resembling a natural foraging situation. This apparatus allows the researcher to pair sucrose (or other solutions) in an artificial flower patch to study reward expectations.

This artificial flower patch consists of 24 Eppendorf tubes (4 cm deep) that function as flowers. This is included in your order. They are regularly distributed over the surface of a foraging arena. This arena consists of two superposed acrylic plates, creating 24 holes of 1cm in diameter.  The lower plate is created with a 0.7-cm thick opaque acrylic plastic, while the upper square was a 0.2-cm thick transparent Plexiglas.

The flowers were held by the upper surface of the patch and the colored circles were set below this surface, both the flowers and their corresponding visual stimuli could easily be replaced between trials.

The Social Y-Maze is a simple apparatus with natural turn angles as opposed to the T-Maze. The maze construct includes a base Y-Maze with rectangular wire cages at ends of the goal arms. Usually, experimenters study social interaction choices using a dummy object in one arm and a live conspecific in the other.

Bee Reward Expectations Apparatus (BREA) is used to study reward expectations in honey bees. There is a limited amount of data about reward expectations in invertebrates as compared to vertebrates because complex cognitive abilities are considered to be universally present in animals with large brains only. Gil et al., developed BREA to observe reward expectations in foraging honeybees in conditions mimicking natural foraging environment. Associative learning for rewards depends upon the association between external cues and internal representation of reward from past experiences. Studies on reward learning can increase understanding of behavior changes due to reward, reward expectations, goal-directed behavior and cognitive complexity of decision making and planning (Gil 2010).

BREA is an artificial flower patch with a square foraging arena made up of two overlapping plates. There are 24 holes in the plates for Eppendorf tubes (flowers) with sucrose solution as reward for the bees. The flowers are surrounded by colored circles that act as a visual stimulus visible through the overlapping plates. The experimental bees are allowed to inspect and feed on the flowers during training with different volumes of sucrose solution over two variable and three constant reward trials. Later the bees are allowed to inspect the patch in the absence of sugar reward. The bees are observed for choosing correct flower based on visual stimuli and the total time spent looking for a reward.

BREA is an artificial flower patch with a foraging arena 28 cm × 28 cm in size. The foraging arena is made up of two square acrylic plates superimposed over each other, each with 24 holes of 1 cm diameter equally spaced out. The upper plate is made up of 0.2 cm thick transparent acrylic. The lower plate is made up of 0.7 cm thick opaque acrylic. The artificial flowers are represented by Eppendorf tubes that are 4 cm deep and placed in each of the 24 holes in the acrylic plates such that, 1.8 cm of the tube is above the upper transparent acrylic plate. 24 colored circles (12 blue/12 yellow) with a diameter of 3.8 cm, visible through the upper transparent plate are centered around the Eppendorf tubes.

A colony of Apis mellifera carnica bees is housed in a two-frame observation hive indoors. Place an artificial flower patch with unscented 50% w/w sucrose solution 145 meters from the observation hive. Allow a small group of labeled recruiting bees from the colony to feed on the artificial flower patch. The recruiting bees will attract nest-mates to the foraging arena. Trap the new bees arriving at the arena are before they come in contact with the sucrose solution. Mark the trapped bees with plastic tags, cool them and release as potential experimental bees. The bees returning to the flower patch will undergo pre-training phase and become experimental bees.

Clean the entire apparatus to remove any unwanted cues that can influence the performance of the subjects. The tracking and recording of the trials can be performed using tracking and video system such as the Noldus EthoVision XT.

Fill the Eppendorf tubes/flowers with 50% w/w sucrose solution. Remove the colored circles from around the flowers giving a homogeneous opaque gray background to the foraging arena. Allow each experimental bee to visit the flower patch twice before moving onto the training phase. Capture the recruiting bees and any newcomers present at the patch, after starting the pre-training phase and keep them inside small cages until the end of the experiment.

The training phase will start when the experimental bee visits the flower patch after its last or second pre-training visit. Place 12 yellow and 12 blue colored circles around the flowers randomly at the start and change the positions of the circles throughout the training phase with every visit of the bee. Allow each experimental bee a total of nine visits to the patch.

Replace the Eppendorf tubes with new tubes containing no sucrose solution. Remove the foraging arena from the feeding location used during the training phase. Observe the behavior of each experimental bee by allowing them to visit the patch at 24, 25 and 48 hours after the training phase.

Gil et al., used BREA to find out if honeybees develop reward expectations. They trained the bees initially using a neutral conditioned stimulus (flower color) with an unconditioned stimulus (sugar reward). The honeybees were then tested without the presence of sugar reward, and their behavior was evaluated. It was found that honeybees that had experienced increasing volumes of sugar reward during training, spent more time inspecting flowers 24 and 48 hours after training as compared to honeybees that had experienced decreasing rewards. The study results documented for the first time that honeybees develop long-term expectations of reward and they use this behavior for foraging in nature after a long pause in the absence of reinforcement. Such observations are important in further understanding goal-directed behaviors, decision making, and planning.

The following data can be obtained from the experiment

The following data can be obtained from the experiment