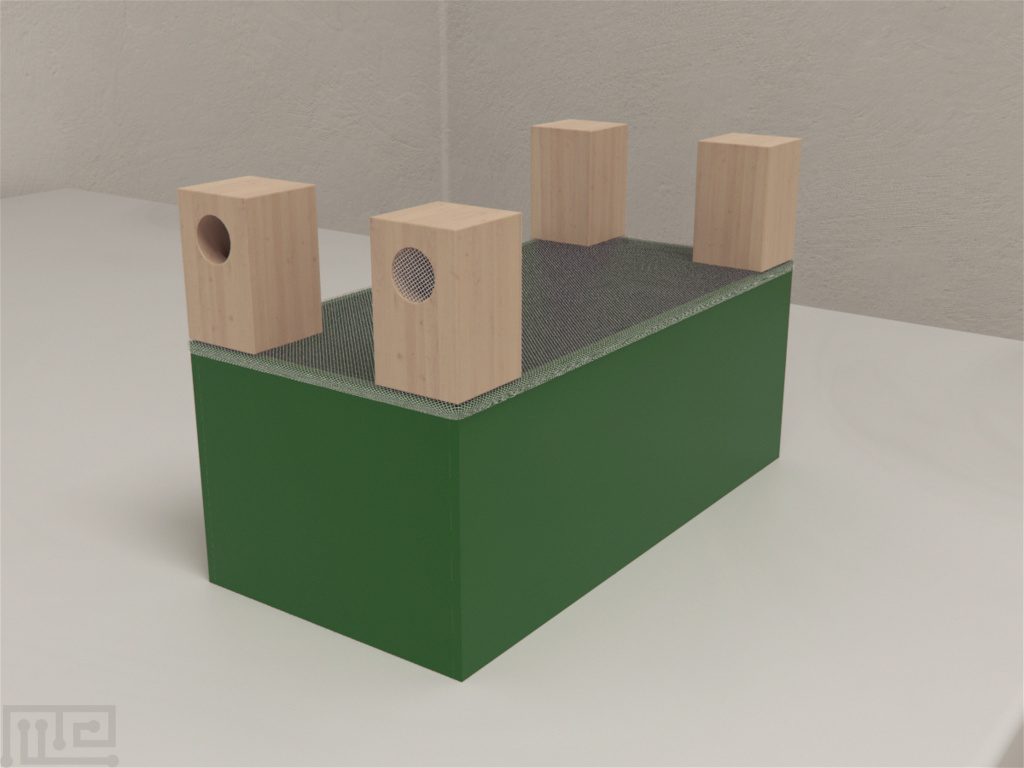 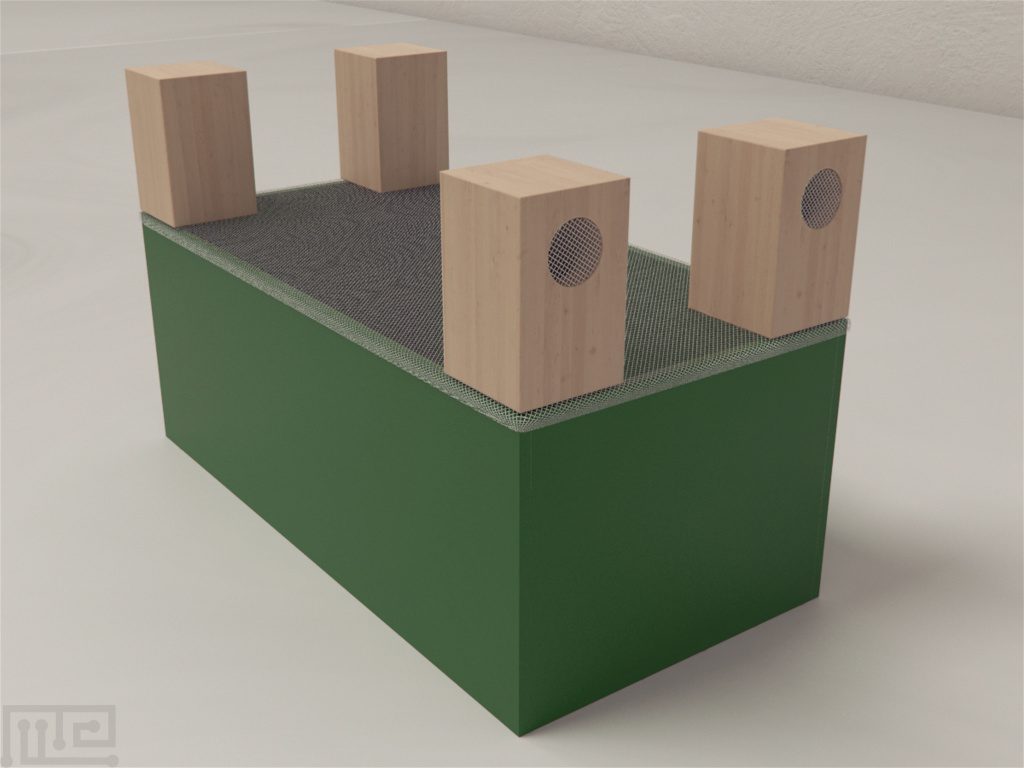 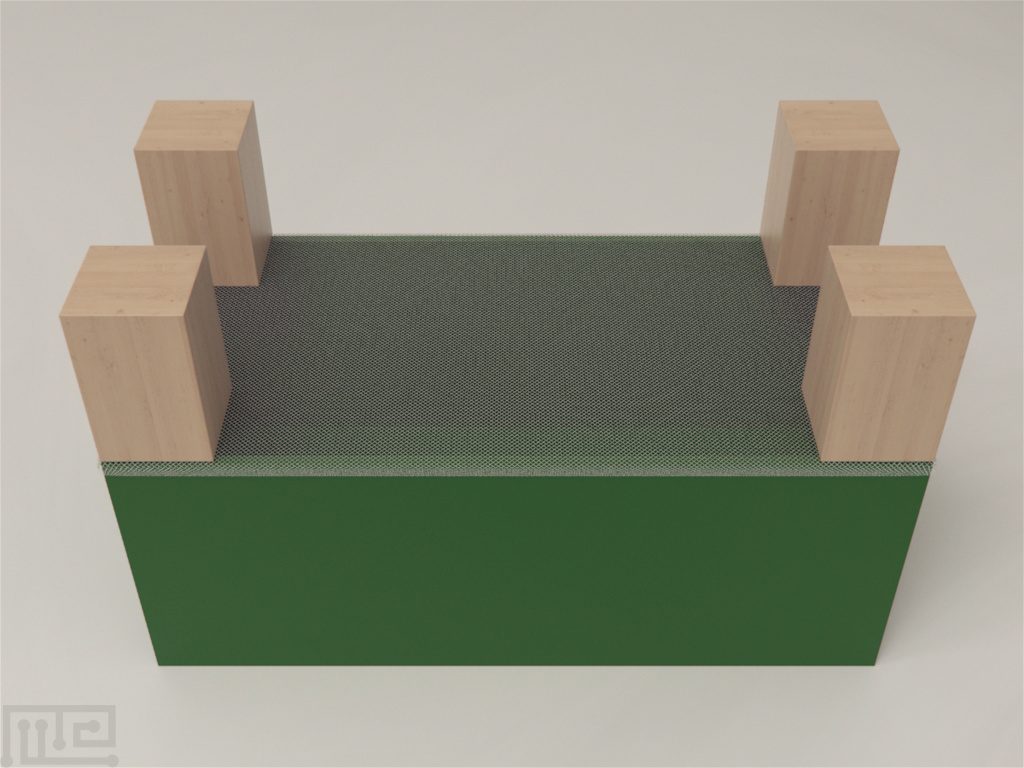 The Bumblebee spatial reorientation apparatus is a rectangular enclosureof green acrylic with an overlying insect net. 4 wooden L shaped blocks are placed in each corner and allows for access from the inside of the enclosure.

the apparatus was originally described by Sovrano et al to study spatial reorientation abilities of bumblebees (Bombus terrestris). The apparatus is used to test spatial disorientation, by passive rotation both clockwise and anticlockwise, and a challenge whereby bumblebees had to find one of the four exit holes located in the corners of a rectangular enclosure.

Spatial reorientation test is principally conducted to assess the animal’s ability to reorient in an environment with the help of available navigational and geometrical cues. The geometrical information utilized by different species mostly consists of metric properties of the spatial surfaces (e.g., whether the wall is long or short) and the navigational sense of left and right direction.

The spatial reorientation test apparatus consists of a rectangular enclosure, surrounded by walls on all the sides. Each corner of the enclosure contains a hidden escape goal that the subject needs to find in the absence of an extra landmark cue.

Spatial reorientation apparatus is supportive in studying the navigational skills displayed by animals when they need to distinguish between geometric equivalent locations, with and without supportive featural information. This study also aids in explaining the subject’s behavior towards the extra featural cues when they are placed both near and far from the goal, in different trials.

To relocate the goal, invertebrates generally rely on a memorized view taken at the goal’s location in a previous encounter. The spatial reorientation study is also highly beneficial in exploring different view based matching strategies employed by insects for navigation.

The spatial reorientation test apparatus consists of a green plastic rectangular enclosure that is about 20 cm long and 9.6 cm wide. The walls of the enclosure are 8 cm high and can be lined with colored cardboard on the internal side, to add the featural cues during the trials.

The top of the apparatus can be covered with a rectangular insect net of about 21 cm in length and 10.2 cm in width, to prevent the insects from escaping during the experiment. An L-shaped acrylic block (2.8 x 2.8 cm at the base and is around 4.5 cm high) is fixated at each corner of the rectangular enclosure. Each of these blocks contains an opening, around 1.5 cm in diameter, which acts as escape goals for the subjects during the trials.

The entire setup is placed inside a larger polyester insect net that is 60 cm long, 60 cm wide and 60 cm high. Food is placed at random locations inside the bigger net to motivate the subjects to find the escape goal during the repeated trials.

In order to start the experiment, the bumblebee is placed in the center of the apparatus with the help of a small opaque container, which is about 7 cm high and is 5.5 cm in diameter. All the escape goals are closed except for one (positive and reinforced) that allows the subject to leave the enclosure and reach the food in the larger net. The attempts to escape the apparatus in all the four corners are recorded until the subject locates the correct exit and escapes the enclosure.

The experiment consists of 2 training sessions per day, with each session composed of 8 trials. It is ideal to keep a 40 minutes interval in between the two sessions. In each trial, the maximum time given to the subject to locate the escape goal is 20 minutes, after which the bumblebee is disoriented and given another trial. When the subject locates the correct goal at first attempt, it is given 10 minutes of positive reinforcement during which it is allowed to move and feed itself inside the larger enclosure freely.

Before each trial, the subject is disoriented by placing it in an opaque container and gently rotating it 360 degrees several times, both clockwise and anticlockwise. Additionally, the apparatus is rotated 90 degrees in a clockwise direction, to prevent the subject from making use of external cues for finding the escape goal.

Another version of the spatial reorientation test includes covering the walls of the apparatus with cardboards (colored or white), in order to provide a featural cue to the subjects during the trials.

Evaluation of reorientation ability with or without geometric cues

Spatial reorientation apparatus is highly supportive in investigating the reorientation ability exhibit by bumblebees with or without navigational cues. The apparatus conveniently allows the introduction of colored cardboards in between the trials, which adds featural information for the subjects to locate the goal.

Evaluation of view based matching mechanism in Bumblebees

The original version of the dominance test tube is a manually handed apparatus. (G.Lindzey et.al, 1961)

A great number of modifications are made to the test tube. A significant modification is made by Wouter E, van den Berg et.al 2014.

An air valve is present at the rear end of the box approx. 1 cm above the base. Additionally, an opaque fiberglass divider is placed in the center.

The activation of each air valve and the positioning of each door are fully automated and regulated independently in real-time for automated tracking with infrared photo-detectors.

The relationship between the bumblebees that located the escape goal in the first attempt versus the ones that made incorrect attempts, when the ‘Featural Cues’ are absent.

The relationship between the bumblebees that located the escape goal in the first attempt versus the ones that made incorrect attempts, when the ‘Featural Cues’ are available.

It is evident from the data that a majority of subjects found it easier to locate the goal in successive trials, at first attempt, when they are presented with featural information inside the apparatus. The bumblebees can effectively make use of both the geometrical and featural cues for navigation.

Spatial reorientation apparatus is highly beneficial in investigating the navigational trends displayed by bumblebees. The convenient dimension of the apparatus allows the subject to move around the enclosure and find the escape hole freely. Since the entire enclosure is covered with a see-through net, it allows an expedient observation of the attempts that subject made around all the corners.

This apparatus promises a highly practical utility for a wide range of experiments to probe the differences and similarities exhibited by invertebrates for reorienting themselves in an environment.