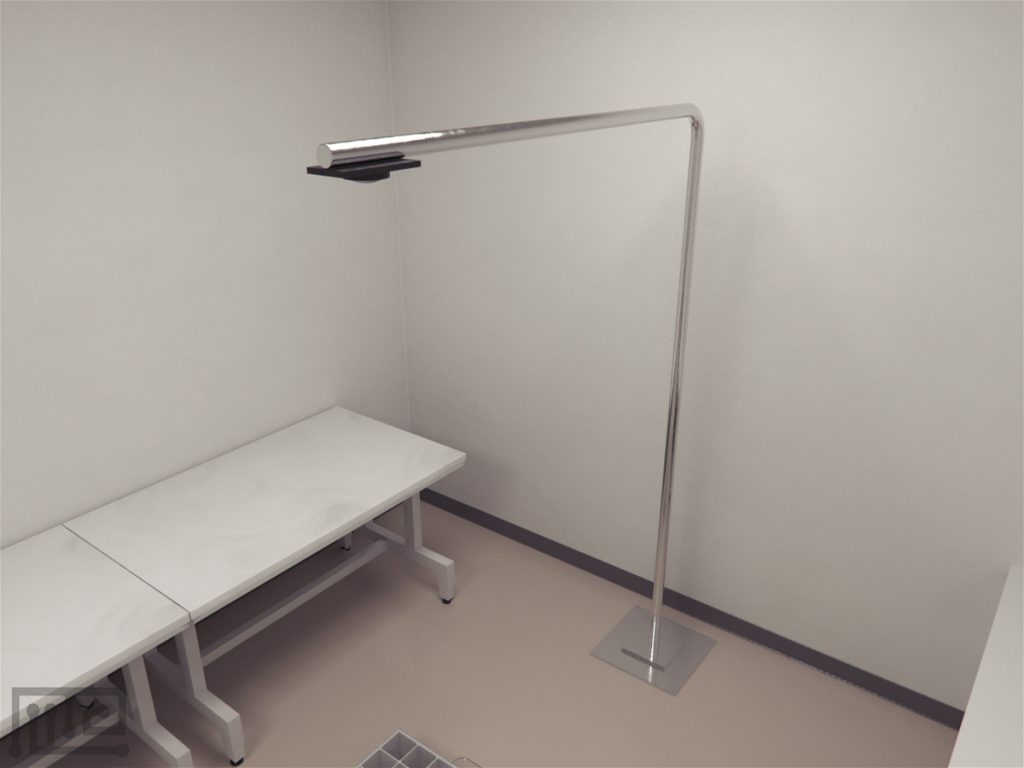 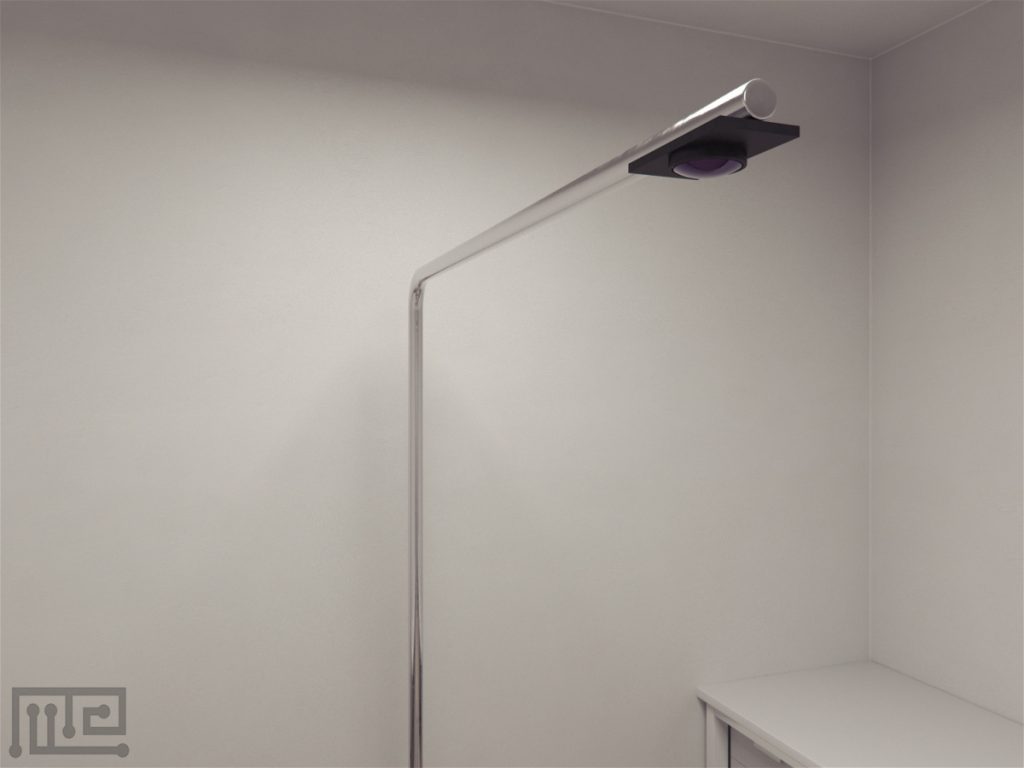 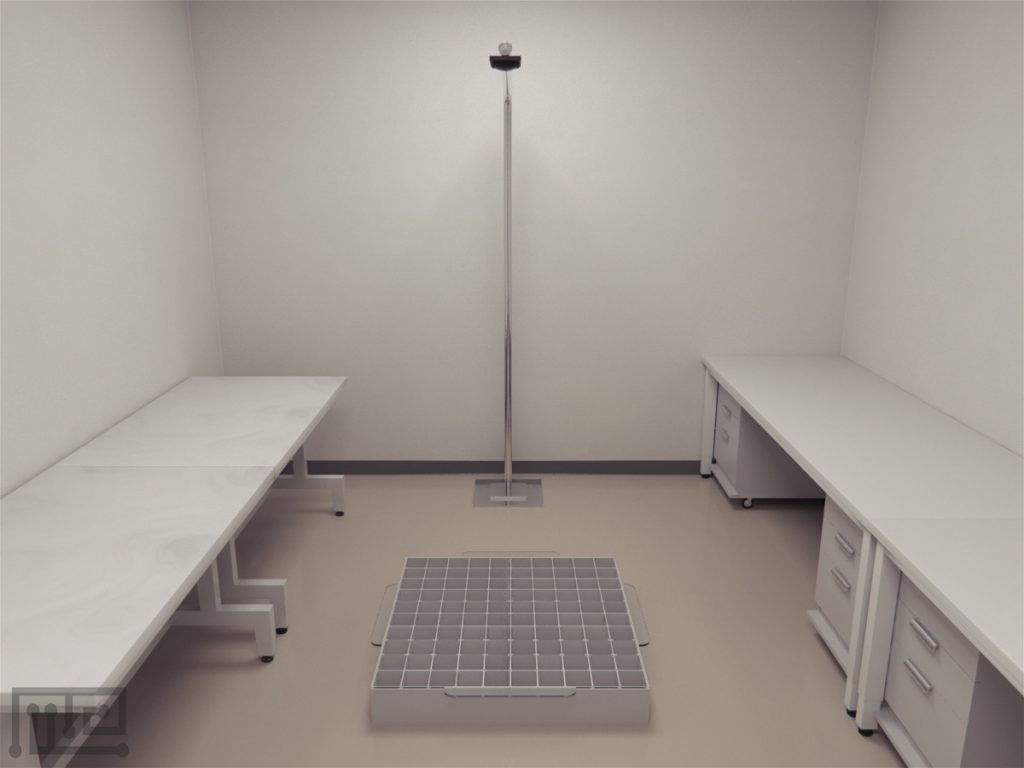 The birds-eye camera is used to monitor the movement and position of subjects in experiments. It can be mounted over a maze to capture an overall view of the maze and the activities taking place in it.

The birds-eye camera is used to monitor the movement and position of subjects in experiments. It is mounted on the tail of the horizontal arm of an L-shaped steel tripod that is 2.4 meters in height. It can easily be used to capture the overall view of different mazes or testing apparatuses for different experimental protocols.

The birds-eye camera can be used along with Noldus EthoVision XT, which is a tracking and recording software system to not only monitor the subject’s movements and position but also to track and analyze other behaviors such as grooming, rearing, and eating.

The following is a sample protocol used to evaluate maze learning behaviors in rodents using the birds-eye camera.

The following can be observed using the birds-eye camera:

Wu et al. (2014) investigated the ability of a hybrid brain-machine system to learn a maze navigation task. Twelve adult Sprague-Dawley rats (6 experimental and six control) were used in the experiment. The rats were implanted with electrodes at their bilateral medial forebrain bundles (MFB) to turn them into ratbots. While performing a maze navigation task, the ratbots carried a backpack stimulator that provided electric stimuli to their brains. The stimulation parameters were generated and transferred wirelessly by a computer, and their movements and position were observed and recorded through a birds-eye camera or a backpack camera. The rats from the control group received the electrode implantation but without any computing device. The maze consisted of 10 x 10 units and included four removable surrounding walls for each unit, which allowed the configurations of the maze to be changed. The experiment investigated three kinds of rule operations conducted by the computer into the hybrid system: the incremental reward rule, the landmark following rule, and a combination of the two rules. In the incremental reward rule, the bird’s eye camera tracked the position and movement of the subject as they navigated the maze. The ratbot’s ability to construct a digital spatial map and reward map was tested. The results indicated that the control group learned to navigate the maze much slower than the experimental group. In the landmark following phase, the birds-eye camera was replaced by a wireless head-mounted mini camera, and landmarks were placed in the maze, which indicated the correct direction to navigate. The results indicated that the experimental group outperformed the control group. In task 3, the experimental group continued to outperform the control group and displayed faster learning of the maze navigation task.

The birds-eye camera can be used to monitor the movements and position of the subjects in different mazes and experimental apparatuses. It is attached to the end of the horizontal arm of an L-shaped tripod, which makes it easy to move around and placed to get the overall view of the apparatus. It can easily be connected to a computer to further analyze the subjects’ movements and behaviors through different software programs. It can be used to monitor the subject’s movements for different experimental protocols.