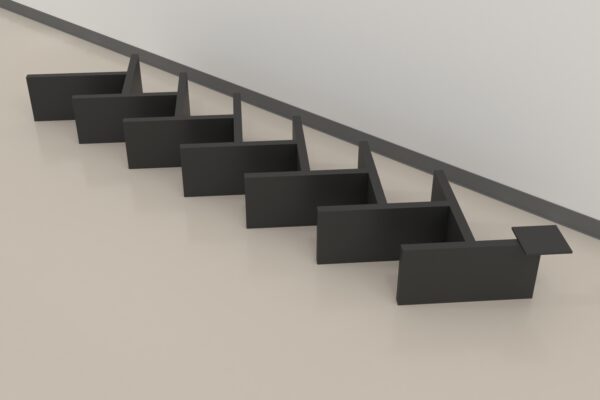 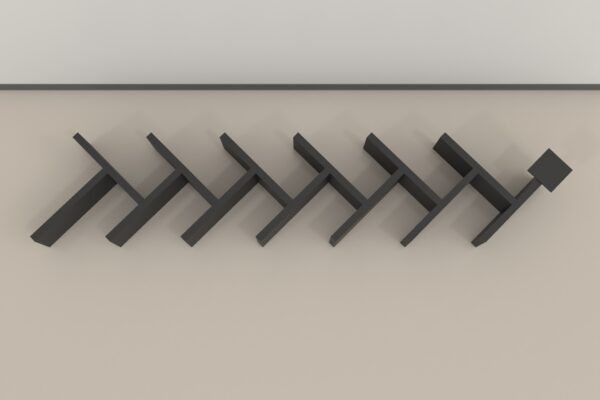 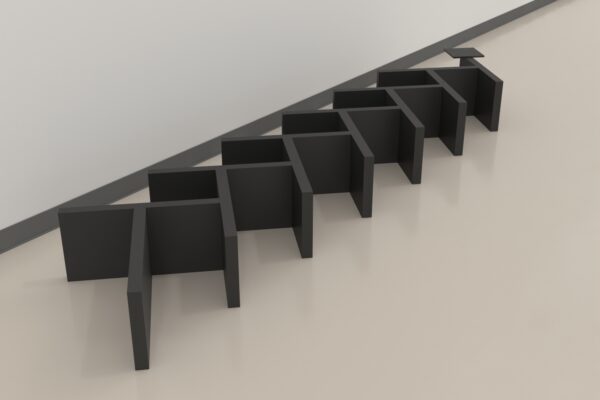 The Blocked Elevated Maze is used to study spatial learning and memory in rodents. It is an adaptation of the standard rodent T-Maze and the Elevated Plus Maze and comprises several elevated blocks arranged in a multiple T zigzag pattern.

The apparatus consists of an elevated pathway constructed of den blocks on a level floor. The blocks are arranged in a zigzag pattern creating 13 units of true pathways and 12 units of blind alleys. A food box is located at the end of the pathway.

The Blocked Elevated Maze is used to study spatial learning and memory in rodents. It is an adaptation of the standard rodent T-Maze and the Elevated Plus Maze and comprises several elevated blocks arranged in a multiple T zigzag pattern. A food box is located at the end of the maze, and the subject is required to make a simple left or right alternation of direction in each block to reach the end. Therefore, rodents must make multiple correct choices within a single trial, which challenges their spatial learning and memory greater than simple two-choice mazes.

The Blocked Elevated Maze’s elevated pathway is constructed of multiple den blocks. These blocks can be arranged according to experiment needs, allowing rodents to be tested using any maze pattern. The standard T zigzag T configuration creates 13 units of true pathways and 12 units of blind alleys. On the other hand, a double alternation configuration creates 17 sections of true pathways and 16 blind alleys, creating a higher number of total entrances into true sections and greater space for exploration. The ability to remove and rearrange the blocks is also advantageous for transportation and storage purposes. Furthermore, an elevated Y-Maze or T-Maze can be constructed using three blocks of the Blocked Elevated Maze.

The apparatus consists of an elevated pathway constructed of den blocks on a level floor. The blocks measure 1 34 inches in width, 12 inches in height, and 24 inches in length. The blocks are arranged in a zigzag pattern creating 13 units of true pathways and 12 units of blind alleys. A food box is located at the end of the pathway.

The investigation of initial rodent behavior on the Blocked Elevated Maze

The investigation of negative adaptation to maze exploration in rodents

Dennis and Sollenberger (1934) investigated negative adaptation to maze exploration in rodents using the Block Elevated Maze. Forty-four untrained Wistar albino rats six to twelve weeks old were used in the study. Two experiments were conducted depending on the maze configuration. In the first experiment, the standard configuration of the Blocked Elevated Maze was utilized. However, in the second experiment, the maze was modified such that there were sixteen dead ends and seventeen sections of true pathway. The second experiment was conducted on the same subjects fourteen days after the first experiment. The subjects were deprived of food for twenty-four hours before the experiments.

The results from the first experiment indicated that the forty-four subjects made 354 full-body entrances and 6 partial entrances into the arms of the apparatus during the five minutes. The number of alley entrances peaked in the first minute and steadily fell over the course of the following five minutes. There were 100, 80, 69, 64, and 41 entrances per minute, respectively. Activity in the fifth minute was less than half that of the first minute. The results from the second experiment indicated that there were 1,038 full-body entrances in total. This was three times the activity the same rats made on a single unit of the same maze two weeks prior. The increase in activity was potentially due to the greater space for exploration. The total number of complete body entrances throughout the minutes was 153, 205, 254, 239, and 187. Activity peaked in the third minute before declining. During the fifth minute, activity is only 74% of what it was in the third minute. Compared to experiment 1, this drop is not as significant. Overall results indicated that the rats tend to steer clear of previously traveled paths during the initial exploration of a maze and also tend to cover less area each minute as they travel on.

The following parameters can be observed using the Blocked Elevated Maze:

The Blocked Elevated Maze challenges rodents’ spatial memory and learning by having several decision points within the maze. The maze blocks are removable and can be rearranged, allowing rodents to be tested using several maze patterns. Moreover, the units can be rearranged for sensory control tests and for easy transportation and storage of the maze. An elevated T-Maze and Y-Maze can also be constructed using three blocks from the Blocked Elevated Maze. The elevated nature allows rodents’ behavior to be more visible during exploration. Furthermore, it is easier to keep the maze clean. Rodents can also be presented with a completely unused pathway by turning the blocks upside down. Therefore, the blocks can be cleaned or washed after every two trials instead of a single trial.

The Blocked Elevated Maze requires the experimenter to be in the room at all times since rodents can occasionally fall from the maze during trials. External visual factors can only be eliminated by blinding the rodents or conducting the experiment in the dark. Since the maze pathway is long, rodents require substantial motivation to explore the entire maze and reach the food box. This motivation may be achieved by depriving the subjects of food before conducting trials.