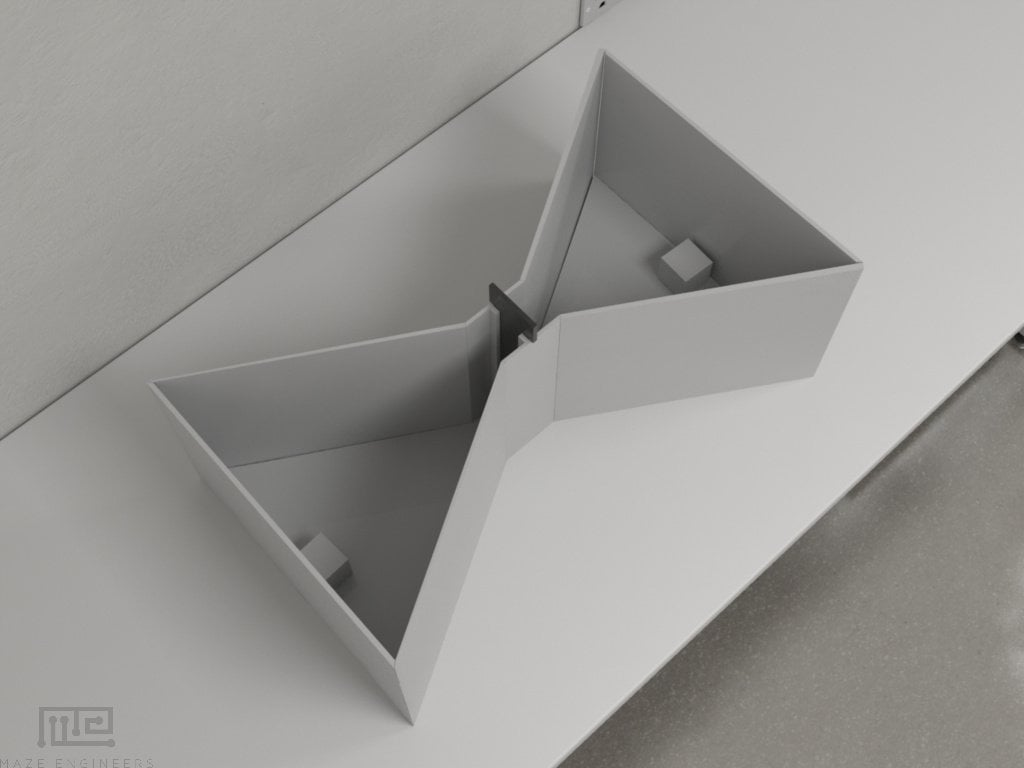 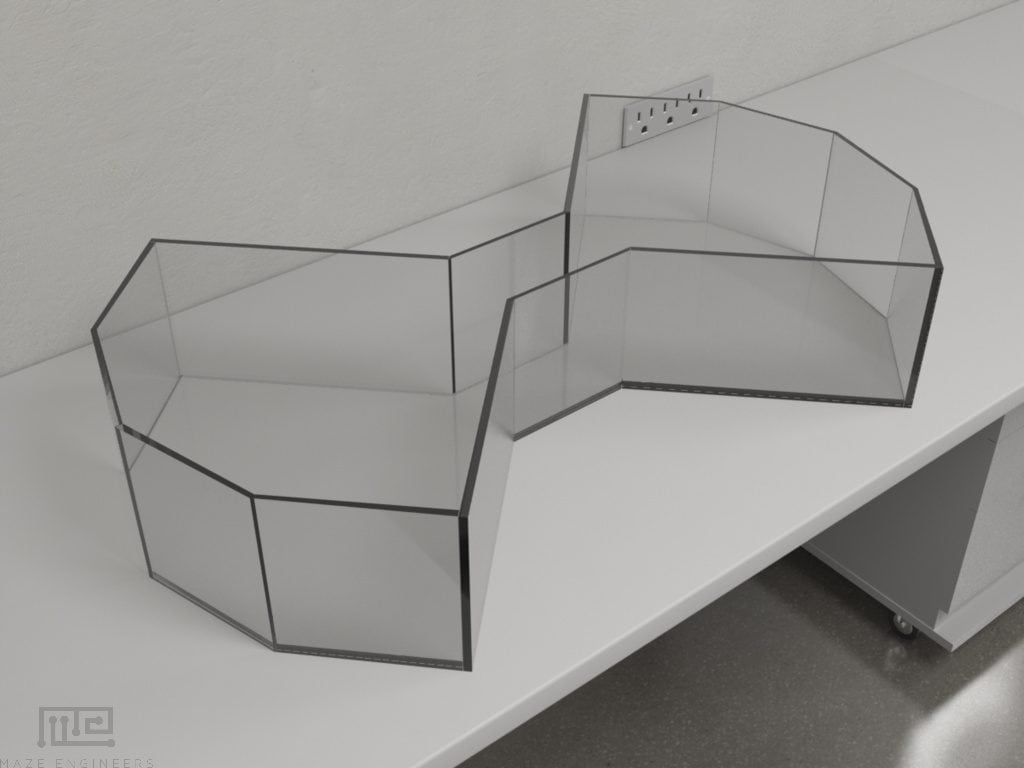 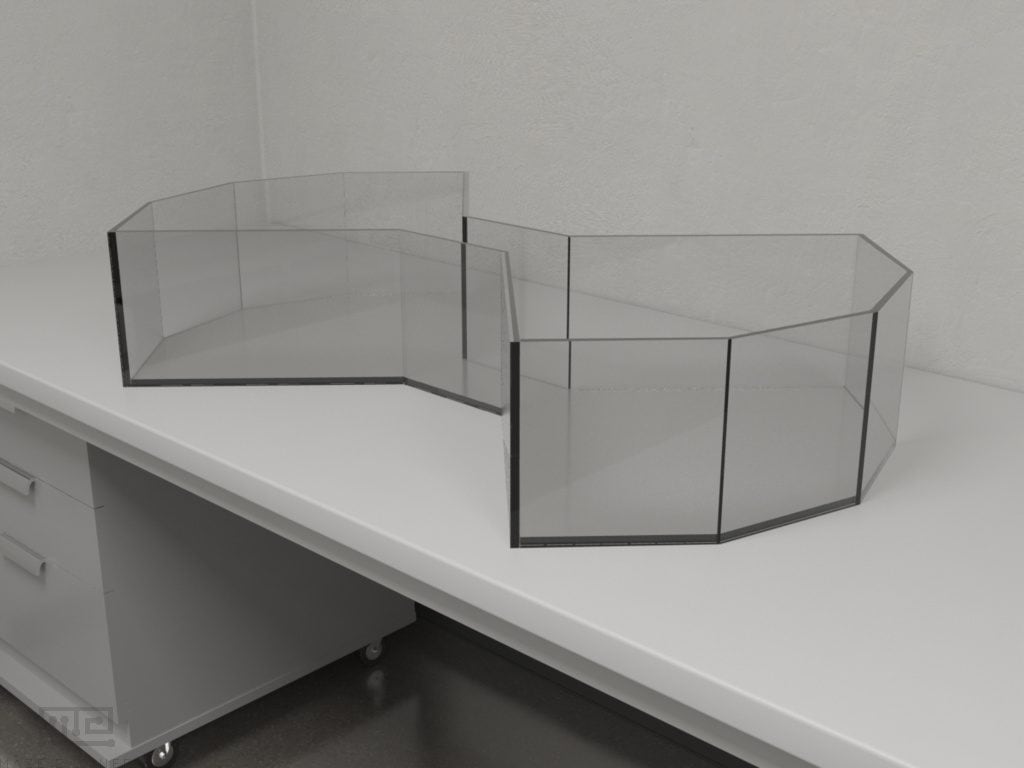 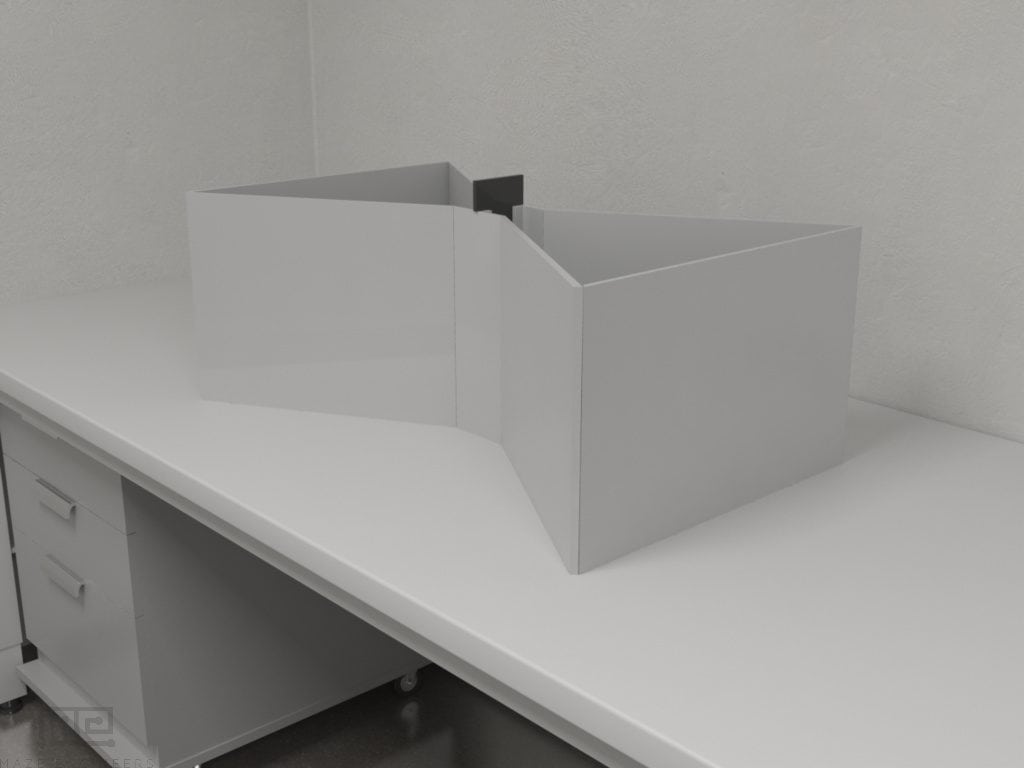 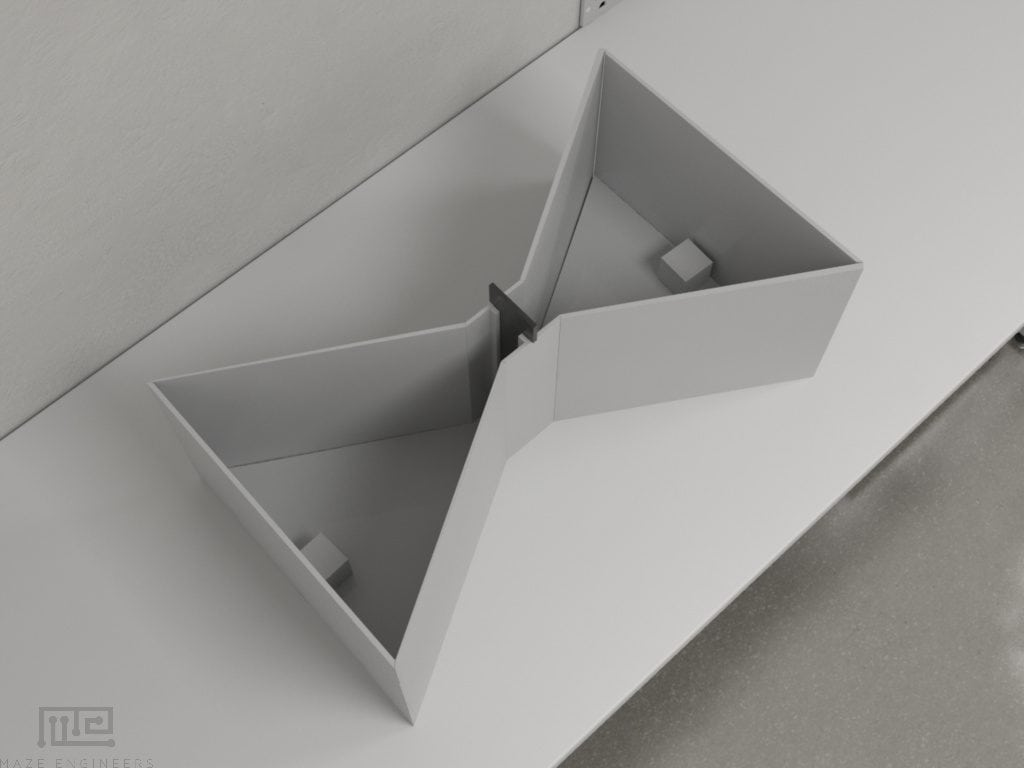 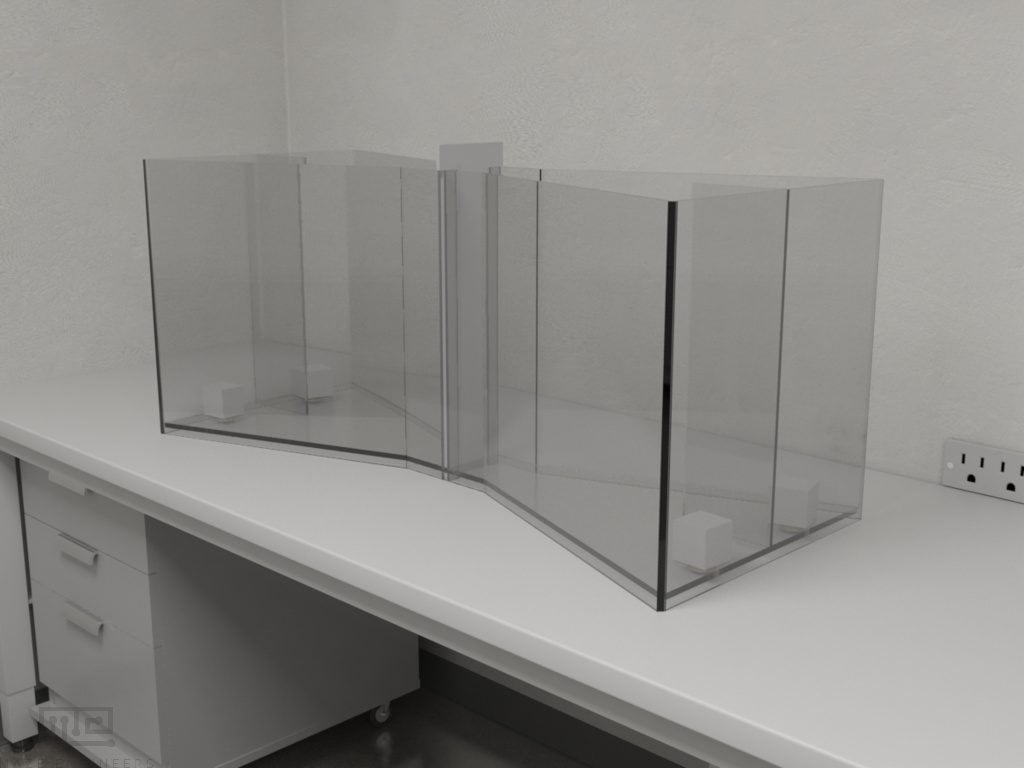 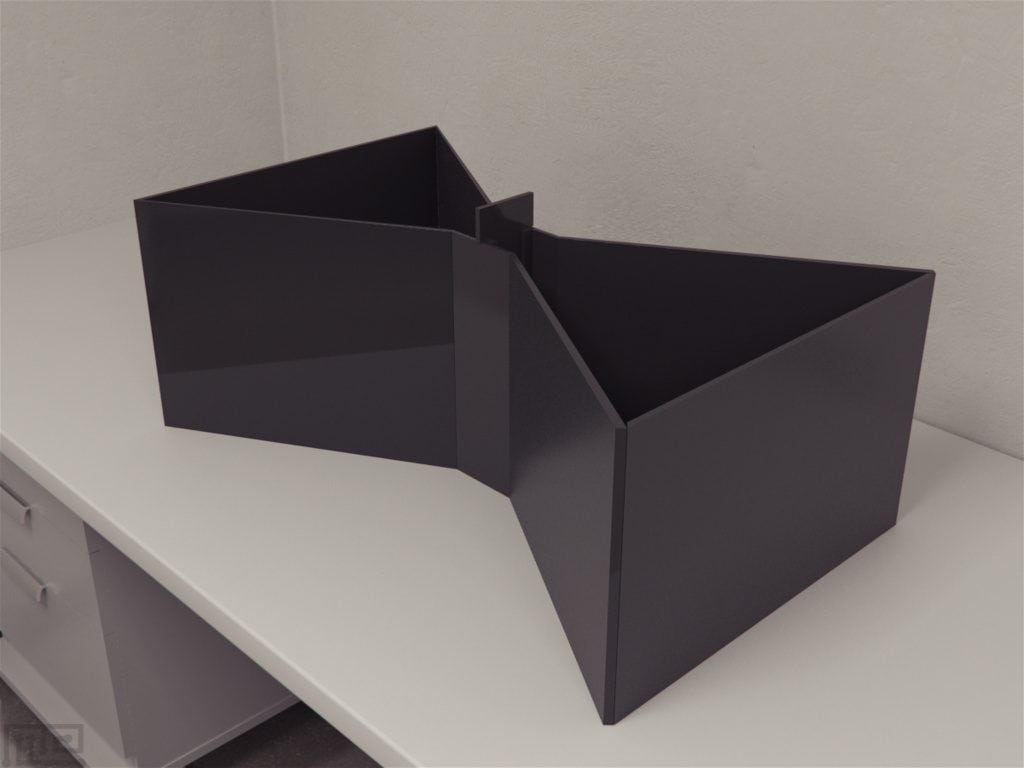 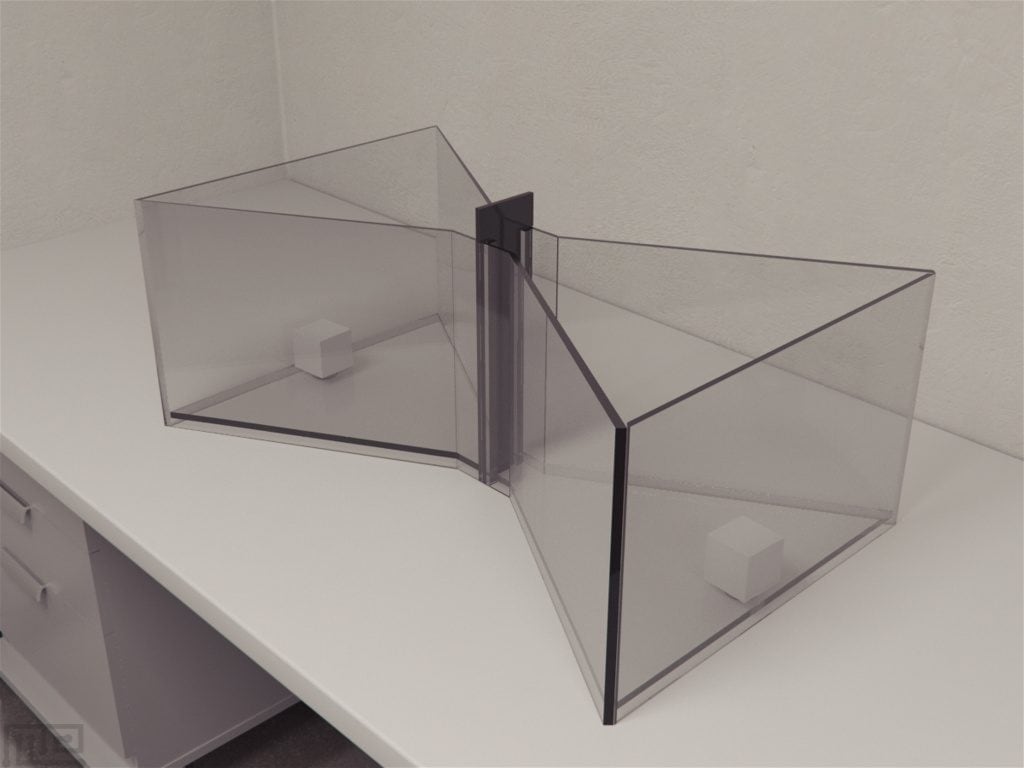 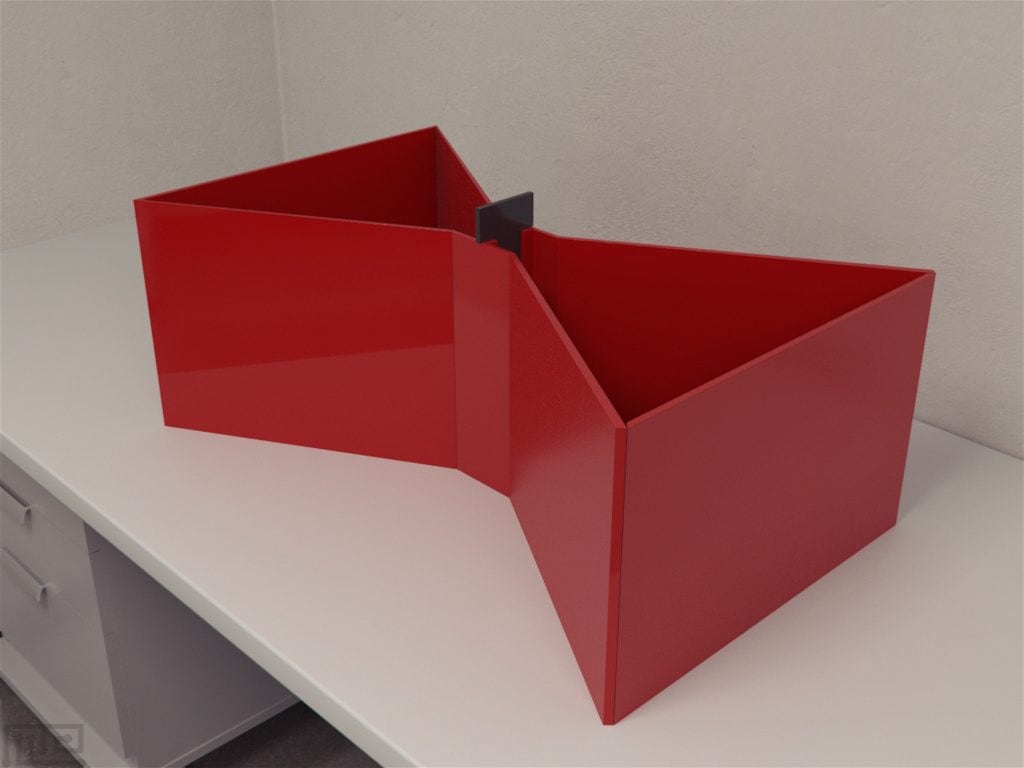 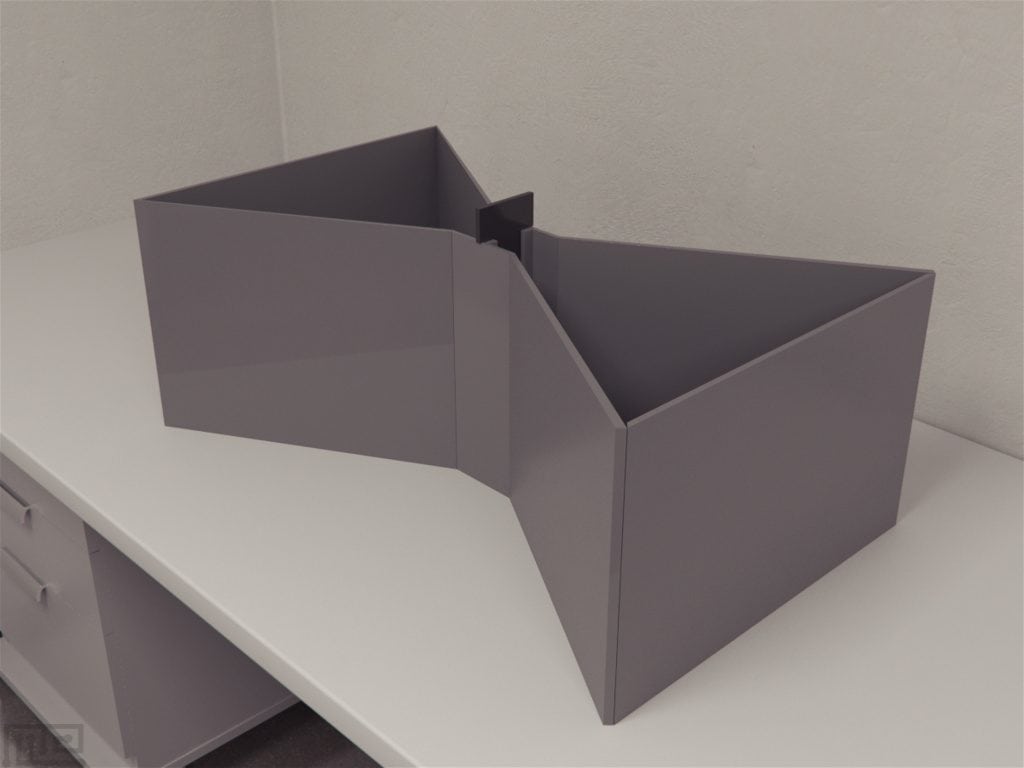 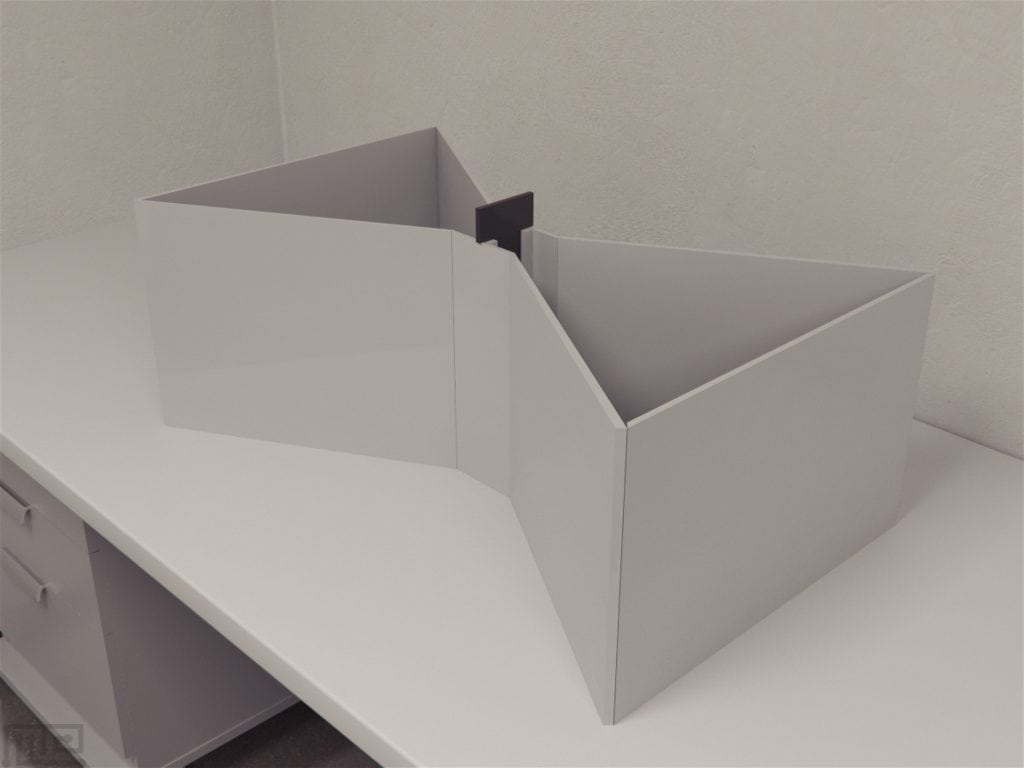 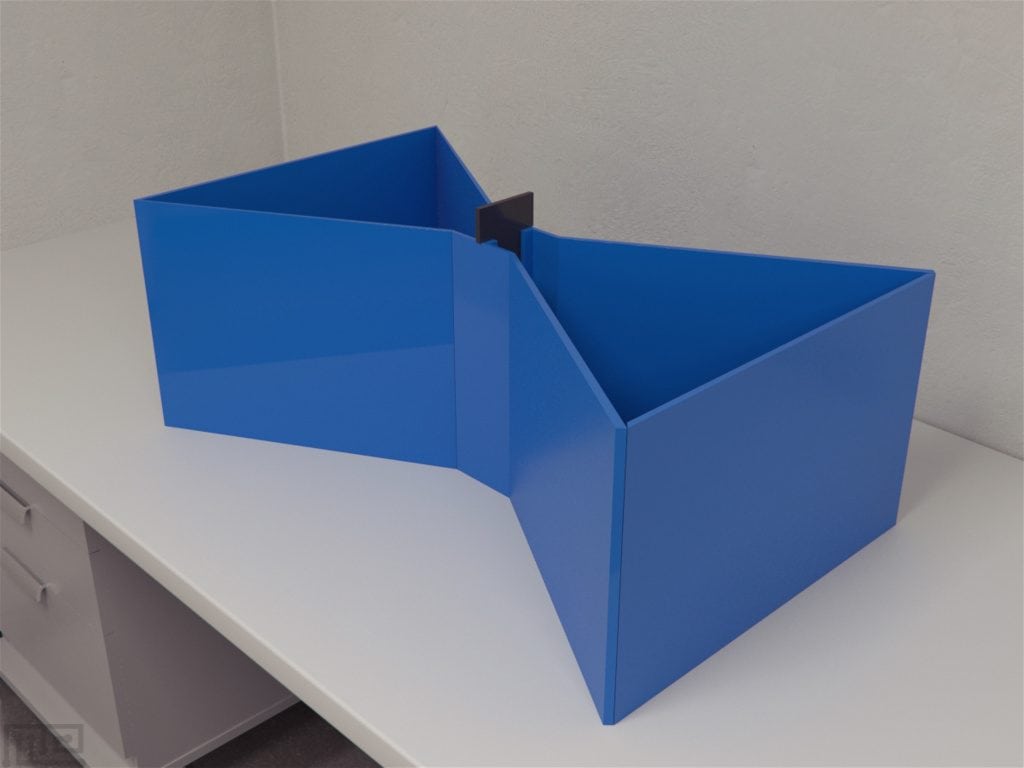 Bowtie mazes are used for a variety of choice experiments for mice and rats. We offer two separate models frequently used and cited in the literature:

Model 1: Used for projection experiments onto the floor. Smaller and more compact. Can be later converted into a choice experiment as well with the inclusion of a small separator. Color: Clear, White, Grey, Black available

Per Month
Request a Bowtie Mazes 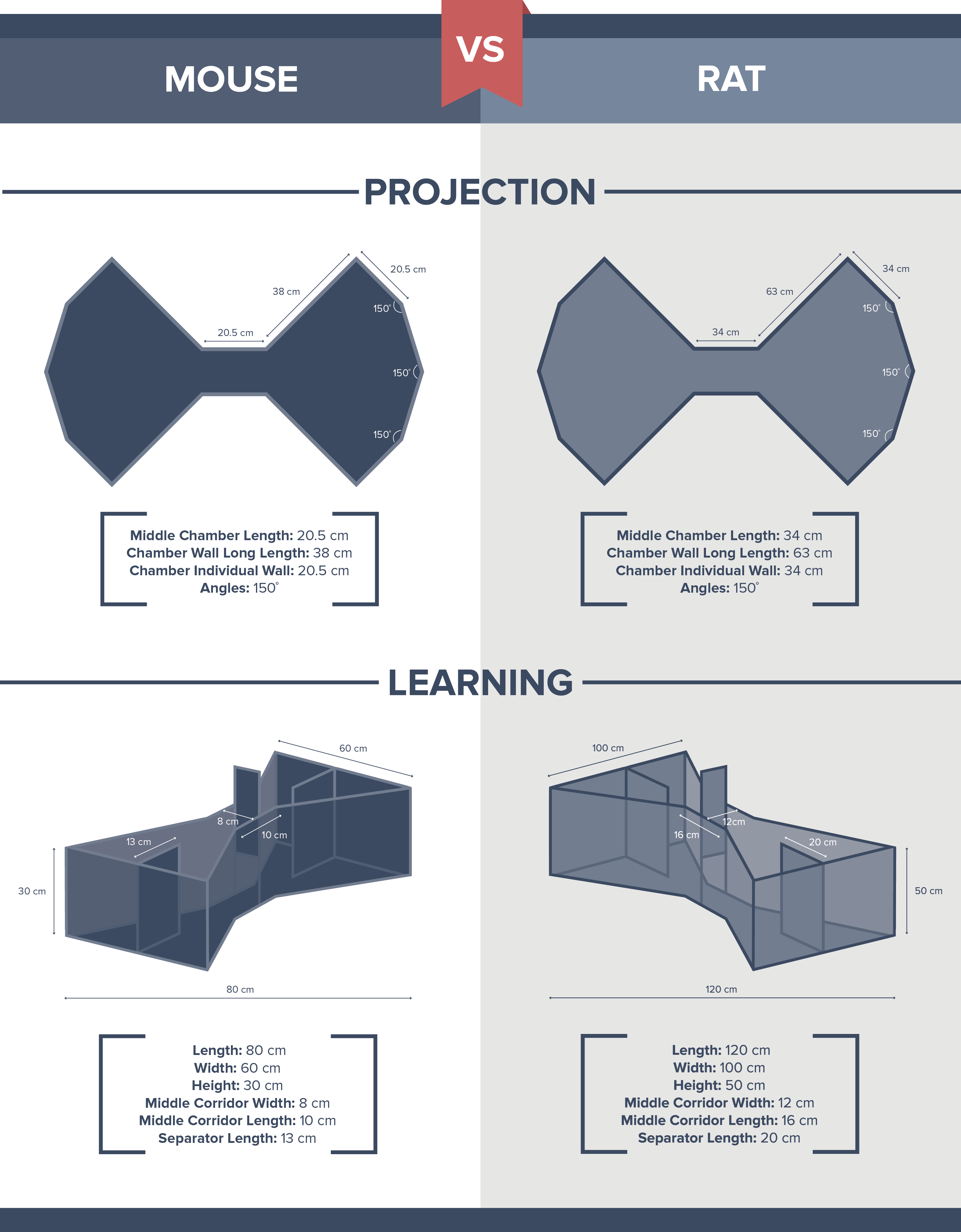 Studies on spontaneous recognition and working memory depend heavily on animal research (Albasser et al., 2010), relying on such tests as the Delayed Nonmatching-to-Sample (DNMS) task and variants of the Novel Object Preference test. These pioneer measures typically investigate recognition memory by presenting a pair of objects and providing a reward when the novel is successfully discriminated from the familiar. NOP tests, meanwhile, make use of behavioral observations as the rodent explores and investigates the object pair freely in an open field. Research has proven the usefulness of such tests; however, a number of limitations have also been identified, such as difficult training procedures, unreliable performance levels, and vulnerability to considerable variance (Albasser et al., 2010). In response to these challenges, the bowtie maze permits adequate training by offering multiple trials per session, with recognition measures firmly rooted in the rodent’s innate preferential exploration of novelty.

Sessions held in the bowtie maze involve multiple trials during which rodents are first introduced to a single sample object, and are then tasked to progressively discriminate between object pairs that are simultaneously encountered as they go back and forth the maze. In this manner, each novel object becomes the familiar object in the following pair (Albasser et al., 2010).

This innovative maze design allows the rodent to efficiently complete object recognition trials multiple times in one session. Additionally, multiple trials help in reducing variance from spontaneous recognition tasks. The easy pattern of behavior (going back and forth the same apparatus) also enables the testing of sensory modalities aside from vision, providing a look into the interplay between sensory systems (Albasser et al., 2011). Studies of retention intervals and the impact of delay on recognition are also more easily observed within a single session and not necessitating the removal of the rodent from the apparatus.

In contrast to the standard object recognition task, reinforcement does not directly guide recognition performance in the bowtie maze, but only works to encourage exploration. With test validity highly dependent on the differential exploration of the test objects (Aggleton et al., 2010), both the novel and the familiar object are baited. Specifically, the rodent is not rewarded for choosing the novel object, but for shuttling back and forth to the two ends of the bowtie maze (Albasser et al., 2010).

The test makes use of a bowtie-shaped maze with each end triangularly-shaped and separated by a small separator placed in the middle of the apparatus where the two apices meet (See infographic 1A). The far walls of each triangle contain two recessed food wells on which the objects are to be placed. An opaque wall divider separates the food wells.

The maze is typically made of Plexiglas walls and floor with the opaque separator in the middle of the connecting corridor. The door is routinely removed to allow the rodents to pass through to the opposite side of the maze after each trial.

The rodents are food deprived to 85% of their free-feeding body weight and were maintained at this level, water was available (Albasser et al., 2010). Rodents are thoroughly habituated to handling before the procedure began.

During the third day, food wells are constantly re-baited every 10 minutes to reward the rodents for shuttling back and forth the apparatus. The middle separator is used to control movement across the maze. At this stage, the rodents are also trained to displace the objects and access the food wells. It is done by first presenting the objects as only partially blocking a portion so that the reward can be seen, and then progressively moving the object covering the food wells until it is completely covered. By the end of the 7-day pre-training, rodents shall quickly be moving from one side of the maze to the other as soon as the sliding door is opened and comfortably displacing the objects to access the food rewards. Objects used during pre-training shall not be used for the test proper. 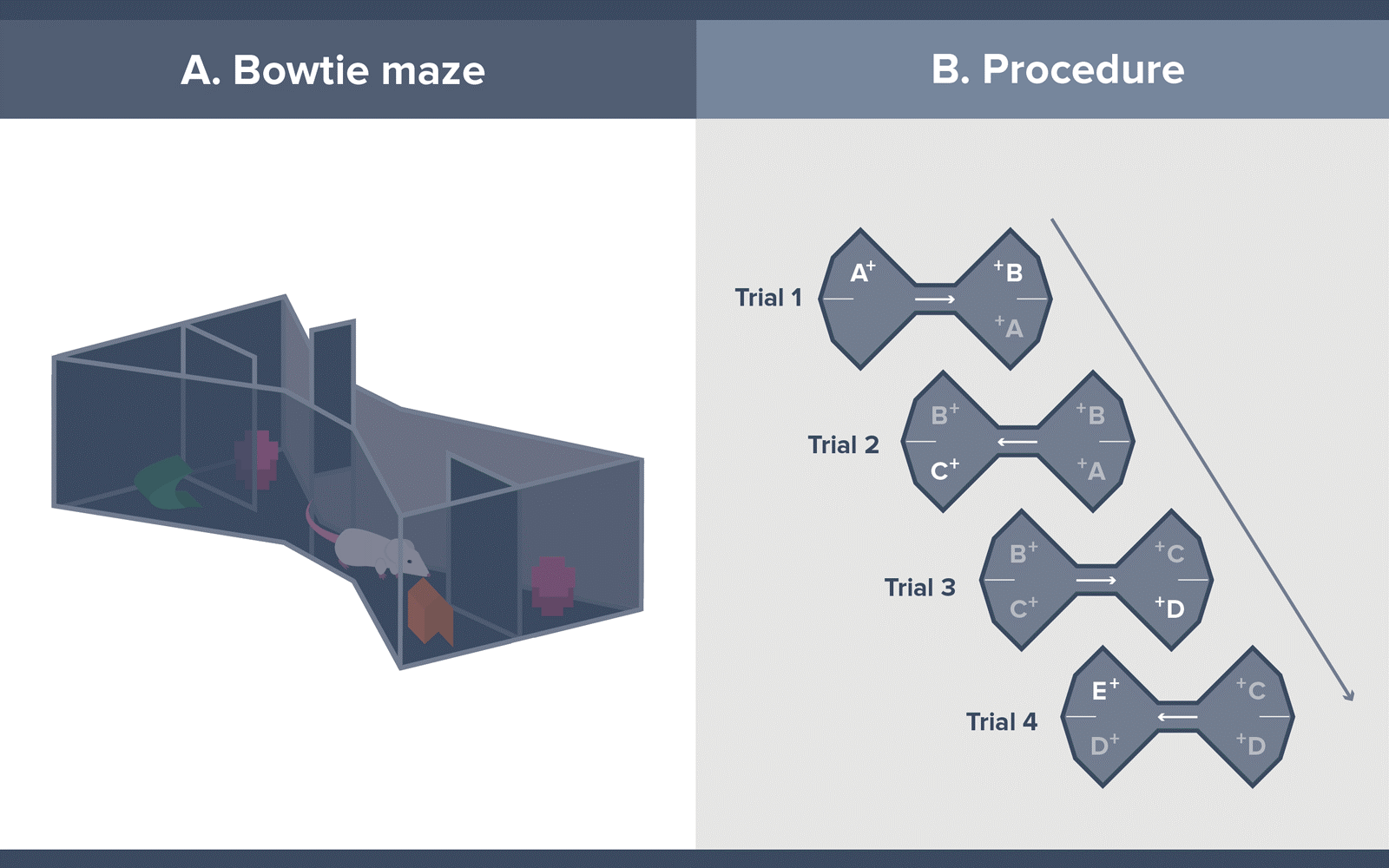 Each session of standard object recognition in the bowtie maze consists of 20 trials, during which the rodent freely explores two objects at a time, one novel and one familiar. The session begins by placing the rodent at one end of the maze wherein only one sample object (object A) is presented, covering a single food pellet. The rodent remains on that side of the maze for 1 minute, after which the sliding door is opened, and the rodent rushes to the other part of the maze.

Moving to the other side of the maze signals the start of the second trial. At this stage, the rodent is presented with a choice between two objects, one novel object B, and the now familiar object A. Both objects cover food pellets. After displacing an object and accessing the food reward, the sliding door is opened, and the rodent rushes back to the other side of the maze for the third trial, wherein object B is presented alongside a novel object C. The rodent again makes a choice and then moves on to the following trial. This procedure goes on until twenty trials are completed, and 21 object pairs have been presented. (See Infographic 1B).

The left-right placement of objects is pseudorandomized. The order of objects is reversed for half of the subjects. Data is recorded through video Noldus Ethovision XT.

Object exploration of rodents is operationalized as directing the nose towards the object at a distance of less than 1 cm. Behavioral observations include moving vibrissae and touching of the object with the nose or paws.

Duration of exploration time focused on the novel object minus time devoted to the familiar object, D1, is measured. The second measure D2 is determined by getting the difference in exploration times between the novel object and the familiar object (D1) and dividing the total value by the overall duration of exploration devoted to both objects. The resulting D2 value is a ratio between +1 and -1, wherein a positive value is interpreted as a preference for novel objects, and a value of zero interpreted as no preference. 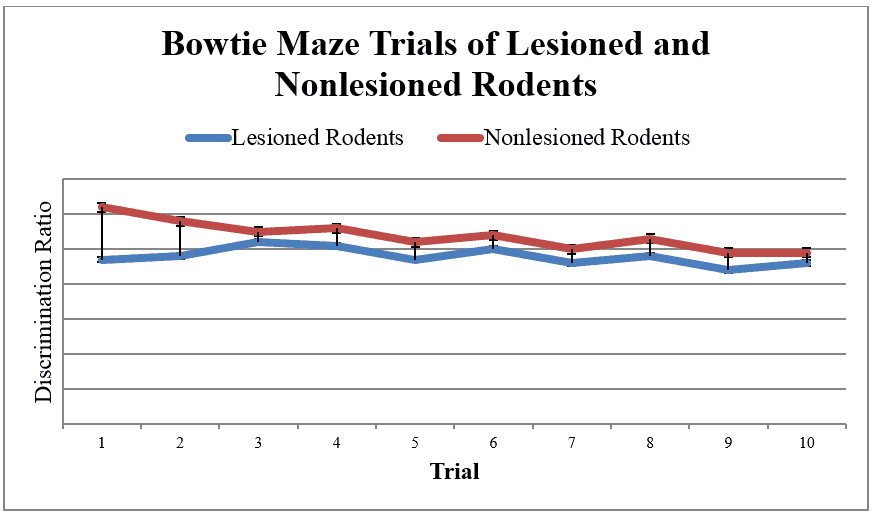 The sample data is represented by plotting the mean discrimination ratio D2 by lesioned and non-lesioned rodents. As discussed earlier, discrimination ratios are determined by getting the difference in exploration time devoted to novel versus familiar objects over total exploration time. Higher positive ratios are interpreted as higher recognition performance, and a zero value indicates no preference. As seen from the graph, the lesioned group had significantly lower discrimination ratios compared to the control group, suggesting impaired recognition memory functioning among lesioned rodents.

The bowtie maze addresses the need for new and sophisticated testing procedures in the field of recognition memory that shall be able to complement traditional DNMS and NOP tasks (Albasser et al., 2010). Bowtie maze and the NOR assay can provide a strong evaluation of object recognition abilities while requiring less extensive pre-training compared to the conventional DNMS tasks.

The bowtie maze procedures allow for a more efficient process of testing with the standard of 20 trials per session, eradicating the hassle of having to remove rodents from the setup after each trial. Aside from its efficiency, 20-trial sessions also ensure more substantial effect sizes. Furthermore, by baiting all objects with food pellets, the usage of reinforcement on object exploration, as opposed to novel object preference, ensures that rewards do not guide discrimination performance.

Another strength of the bowtie maze lies in its ability to test aspects of recognition that are not available in standard spontaneous recognition tasks. One example is the recording of forgetting curves that are more accurately represented through within-session and between-session testing offered by the bowtie maze. Further, the usage of each object as both a novel and a familiar stimulus also effectively counteracts any extraneous effect caused by possible individual object preferences.

Additionally, the development of the bowtie maze has paved the way for a deeper and more nuanced understanding of recognition memory by allowing informative variations in testing, such as light and dark setups and progressive levels of retention delay (Albasser et al., 2010). Specifically, the simple test protocol that involves baiting all objects makes testing in the dark a feasible variation in the protocol, allowing the subjects to rely on egocentric navigation strategies. This particular feature offers an in-depth look at the interaction of sensory systems that may be at play, even in past studies which only initially seek to observe visual recognition in rodents (Albasser et al., 2010).

Rodents are given a relatively short amount of time (1 minute) during sample trials in the bowtie maze, which could play a role in poor retention performance. Moreover, the bowtie maze also faces the issue of additional memory load placed on subjects due to the test’s progressive nature and buildup of proactive interference. Due to this feature, later trials may be more demanding than initial object-pair recognitions.