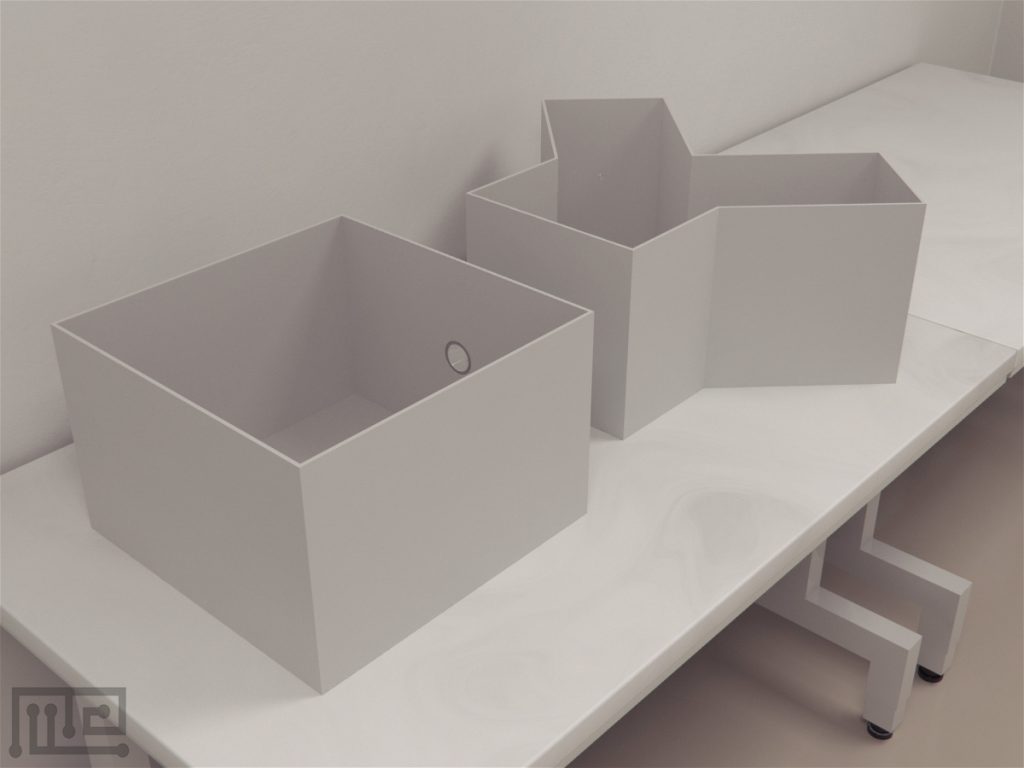 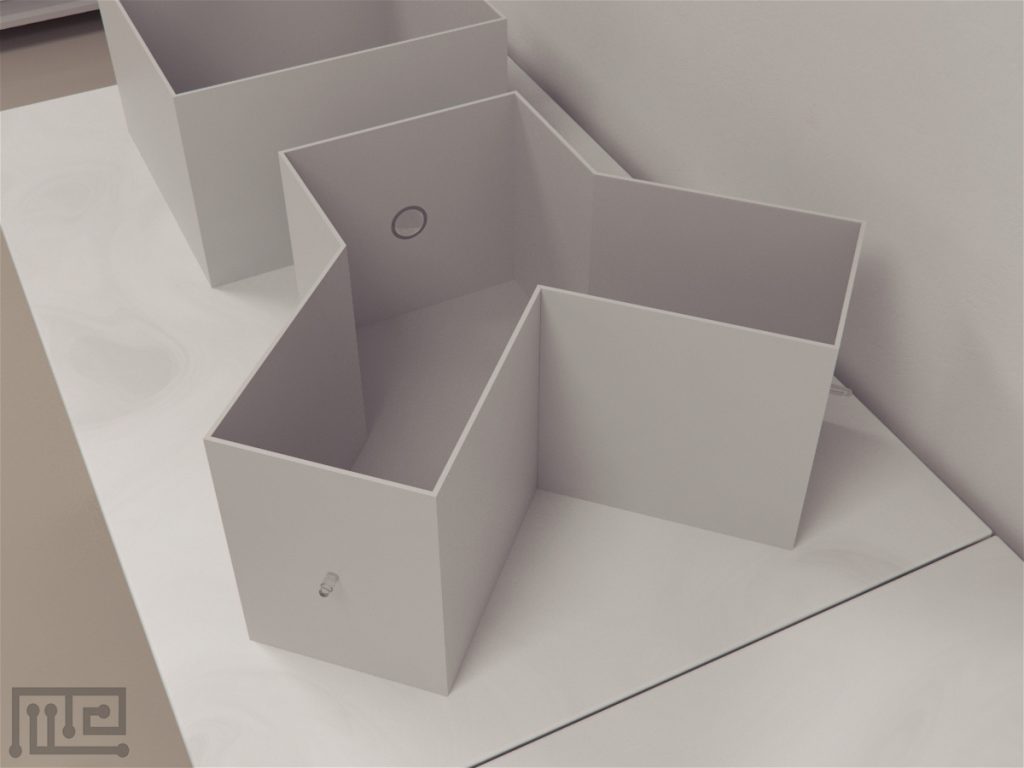 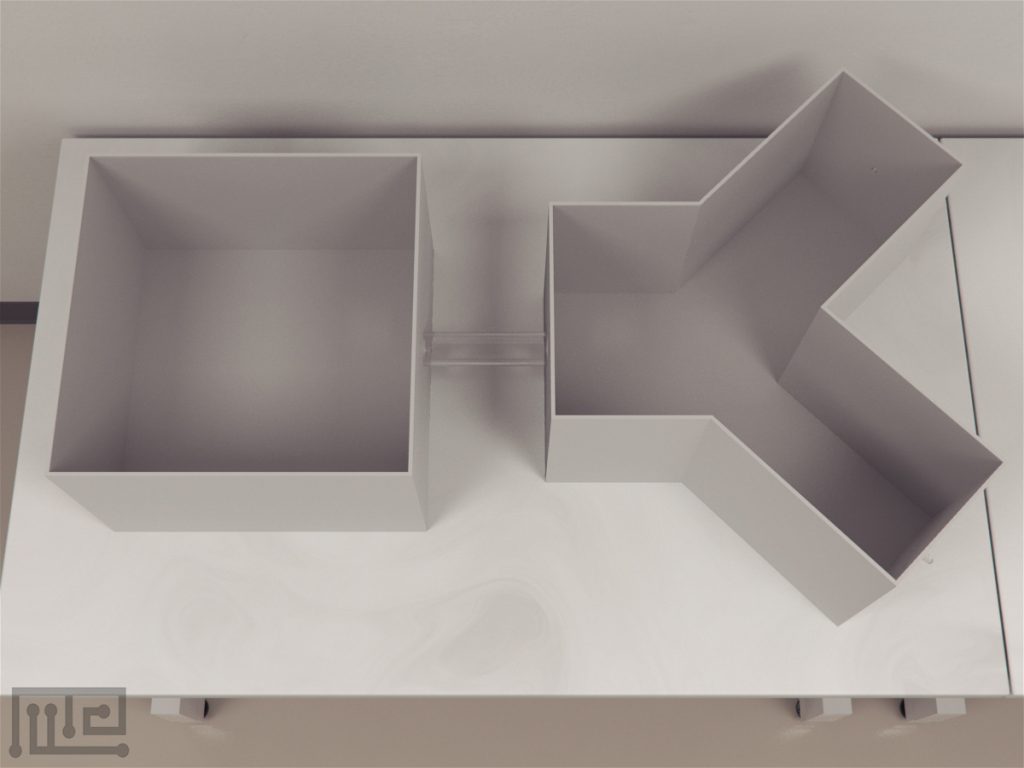 The Bumblebee Y maze was created in an experiment by Johannes Spaethe et al. (2003), to determine quantitatively the relationship between eye optical quality and behavioral ability at target detection over a range of sizes of insects of the same species, the bumblebee Bombus terrestris. It shows that large individuals outperform small ones as a result of an improved optical setting (larger facets combined with smaller interommatidial angles).

Bumblebee colonies were connected to a flight cage via Plexiglas tube. Shutters between the nest and the arena allowed them to control access of selected workers.

The arena has the shape of a Y-maze with an entrance chamber and two tunnels branching from a trilateral decision chamber.

The Honeybee Y-maze apparatus is used to study inferential reasoning and memory retention in honeybees. It is an adaptation of the conventional rodent Y-maze apparatus and allows the use of different types of visual stimuli as a reinforcement.

Bees have highly developed sensory capacities and motor abilities, which allows them to see the environment around them in varying colors, shapes, and patterns. These play an important role in the insect’s survivability by greatly influencing behaviors such as foraging. The Honeybee Y-maze allows the opportunity to explore these abilities and investigate the associated behaviors using a simple two-choice paradigm combined with varying visual cues. Additionally, honey bees also display sophisticated memory and the flexibility to change their preferences based on different cues such as temporal context (Zhang et al., 2006).  The Honeybee Y-maze can be applied to assess learning behaviors and memory under different experimental protocols such as reversal learning and discrimination learning.

The Honeybee Y-maze uses a conventional Y design with a start area that bifurcates into two choice arms. The start area has an aperture through which the honeybee is introduced into the maze. The choice arms have provisions for placement of visual cues and a micropipette in the center of the wall to hold food rewards. Other apparatuses used in the evaluation of cognitive and learning behaviors of honeybees include the Bumblebee Y-maze, the Bee Reward Expectations Apparatus, and the Bee Radial Arm.

The Honeybee Y-maze apparatus is a Y shaped acrylic apparatus that consists of a start area and two choice arms. The apparatus comes with a UV-transparent Plexiglas ceiling. The start area measures 16.5 x 26.5 cm and is equipped with a sliding door. The wall opposite the sliding door consists of an entrance hole measuring 5 cm in diameter which. The entrance hole opens to a decision area which divides into two choice arms having dimension 40 x 20 cm. Each arm has a 20 x 20 cm back wall that can hold a visual stimulus and has a 6 mm micropipette at its center to hold food reinforcements.

Clean the device before and after usage. Observation and recording of the movements of the subjects can be done using a tracking device such as the Noldus EthoVision XT.

Train the subjects during the light cycle. Use fresh visual stimuli in all test performances to prevent influence by odor.

Place the visual cue pairs in the choice arms where only one of the cues is positively reinforced with a reward (such as sucrose). Introduce a single bee into the start area and allow it to enter the decision area of the maze. Allow the subject to consume the reward if it chooses the rewarded pattern. If the subject chooses the non-rewarded pattern, then gently toss the bee away from the arm such that it has to re-enter the maze. Pseudo-randomize the position of the reward to prevent learning in terms of positional cues. Perform 40 trials per pair of visual stimuli. Consider the subject trained if it’s able to achieve 100% accuracy in two consecutive sessions. Additionally, greater than 50% accuracy needs to be recorded in five consecutive trial sessions to be considered fully trained.

Following differential conditioning training, perform extinction trials. Pair together two non-adjacent stimuli that were previously not used in the training sessions. Pairings should be such that they allow evaluation of discrimination of stimuli based on their different or equivalent (transitive inference principle) associative strengths. Perform tests for a duration of 1 to 2 minutes without any rewards. Repeat the tests twice by alternating the sides of each stimulus from one test to the other. Between each test, perform four refreshments trials by presenting each premise pairs only once to maintain subject motivation between trials.

Connect the cage via Plexi-glass tube to the Y-maze. Use different pairs of stimuli from the one used during the training phase. Mark foragers with colored spots on the thorax and abdomen. Let the marked subject fly to the entrance chamber of the maze. Shut the sliding door to prevent access to other subjects. If the subject chooses the incorrect arm, allow it to correct its choice but do not make a record of it. Allow the subject to return to the cage after a visit to the feeder. Start the next trial when the subject initiates a new foraging trip. Repeat the test twice.

Benard and Giurfa (2004) evaluated transitive interference reasoning of free-flying honeybees, Apis mellifera L., in a Y-maze task utilizing achromatic visual cue patterns (A> B> C> D> E, associative strength). In the discrimination trials where only one cue was rewarded in each pair, it was observed that the bees were able to learn the four premises consecutively. However, when performances were judged based on the acquisition curve, learning performance did not improve with each consecutive pair. Additionally, when the trial blocks were shortened to reduce recency effects, the bees were unable to learn to discriminate the premise pairs. Following discriminative conditioning training, the bees were evaluated for their ability to discriminate between cues that were either equivalent or different in their associative strengths in extinction trials. Learning performances were observed to improve in the refreshment trials, which also contributed to recency effects in the task performances. Under all experimental conditions, the bees did not display transitive interference reasoning as observed by their preference for D visual cue as opposed to the B visual cue in the extinction trials. However, when evaluated with pair A and E, the bees showed a strong preference for the visual cue A, which could be attributed to the combination of recency effect and associative strengths.

Dyer, Spaethe, and Prack (2008) studied the behavior of bumblebees (Bombus terrestris) and honeybees (Apis mellifera) in discrimination and object detection tasks using color stimuli as visual cues. The stimuli used were in blue and green colors. The first experiment tested six bumblebees for their ability to discriminate between the pointed star stimulus on a grey background using form vision. They were tested for blue stimuli on the first day and the yellow stimuli on the next day. Sucrose was chosen as positive reinforcement while quinine hemulsiphate salt was used as negative reinforcement. Use of quinine hemulsiphate as negative reinforcement led to better results when making a decision among the bees.  The second task tested the subjects in a behavioral task to differentiate between stimuli at a fixed angle in a Y-Maze task. A third experiment was performed to check the discrimination threshold of honey bees when visualizing stimulus at a larger angle. The findings from the study suggested that despite having similar spectral sensitivities for detecting a colored stimulus, bumblebees were significantly poorer at discriminating between the colored choices. Both species were able to discriminate between color stimuli at greater angles than initially predicted.

The following data can be analyzed by using the Y-maze apparatus:

A decision is said to have been made when the subject crosses the dotted line.

Honeybee Y-maze’s simple design makes it less stressful for flying insects like honeybees. The natural angles of the Honeybee Y-maze apparatus make it a better choice than the T-maze apparatus, which has sharp, unnatural turns. The apparatus comes with sliding doors to prevent access to other subjects when an experiment is being conducted. The apparatus has a UV-transparent Plexiglas ceiling to ensure natural daylight conditions for the subjects. The apparatus can be used with a range of stimuli, such as achromatic or colored patterns to study decision-making behavior. These stimuli could be detached, and their positions can be changed, preventing the subject from forming a strategy to solve the task. The presence of a micropipette container makes it convenient to place the reward without any spillages.

Factors such as the species, motor patterns, enthusiasm to look for reward, and stimulus type can affect the performance on the Honeybee Y-maze. Chronic stress can cause lack of motivation in the subject, thereby affecting drive for exploration of the maze. Use of achromatic patterns might cause confusion and distraught the subject leading to faulty results. If the sliding door isn’t shut carefully, it can harm the subject.