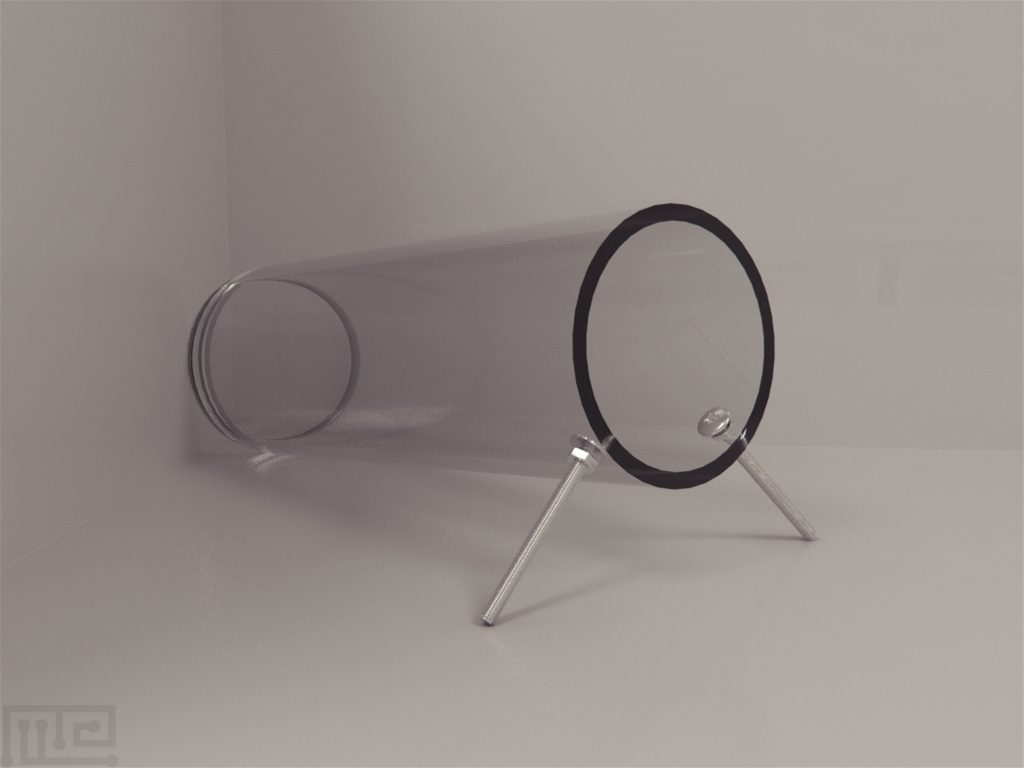 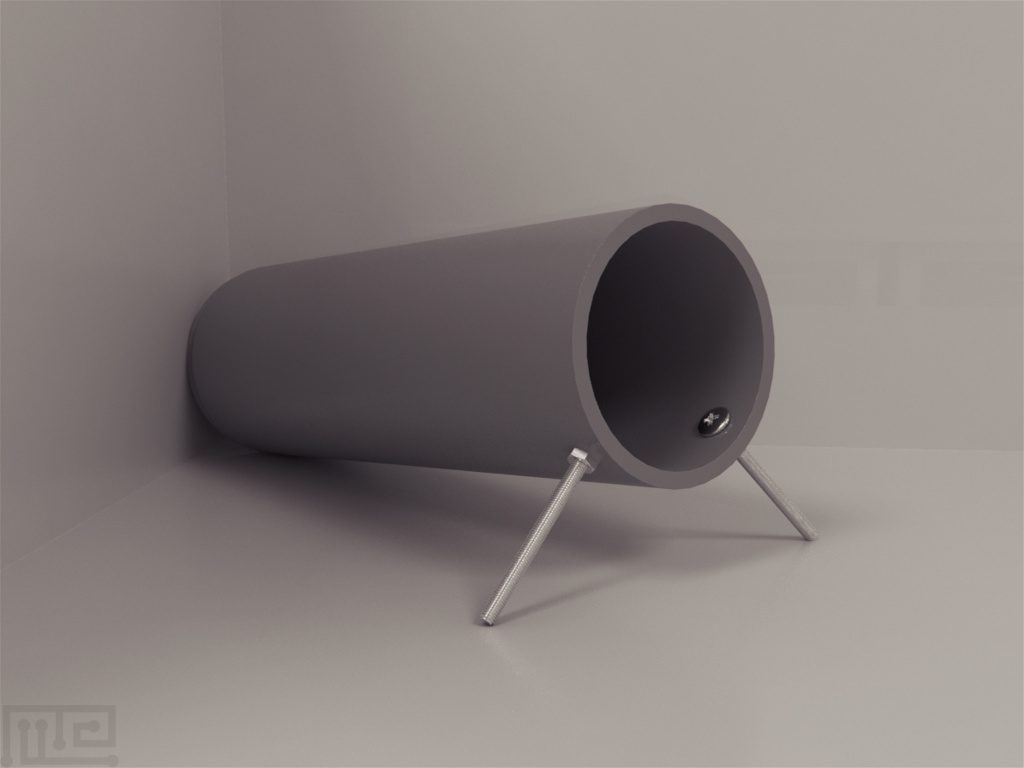 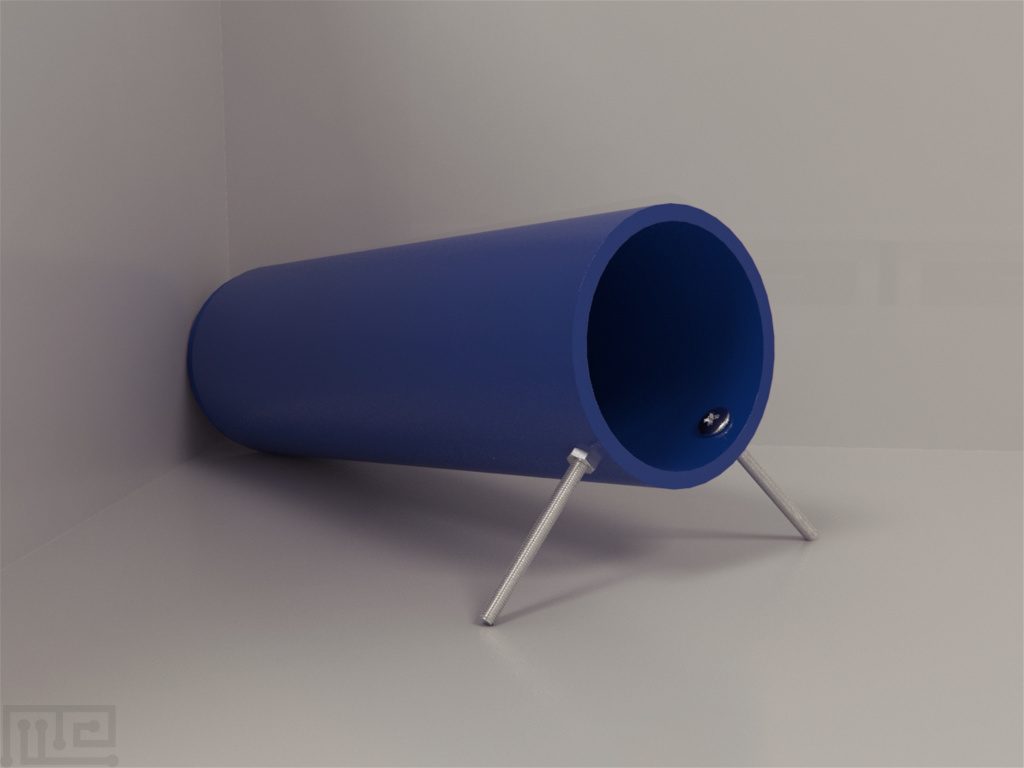 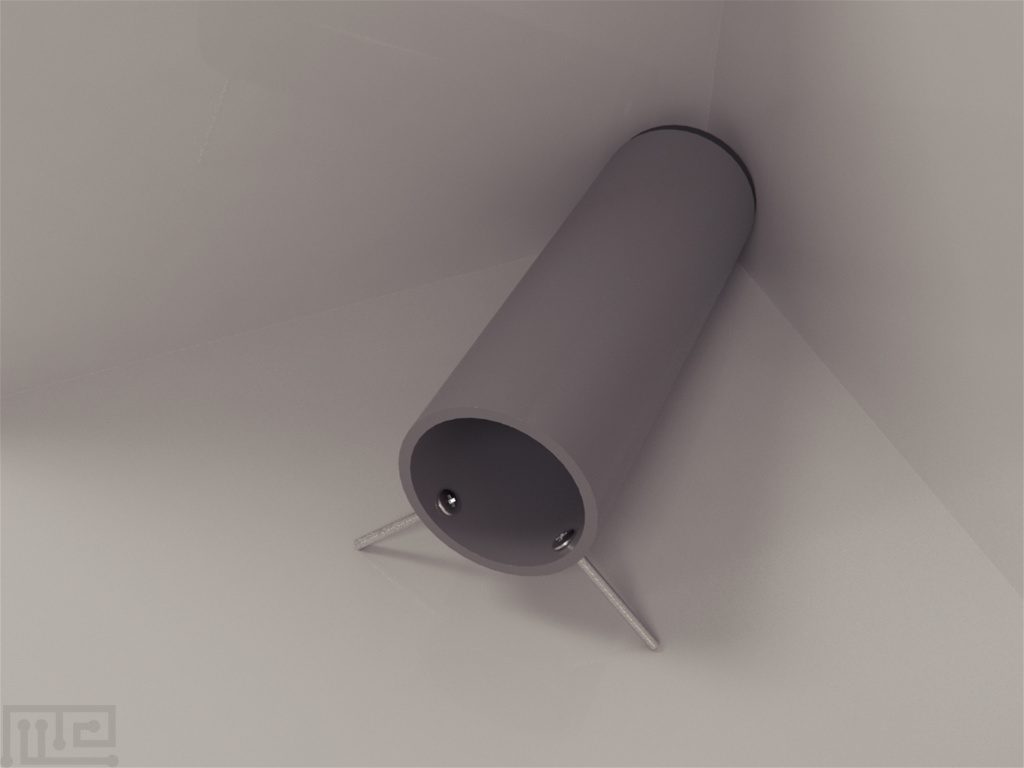 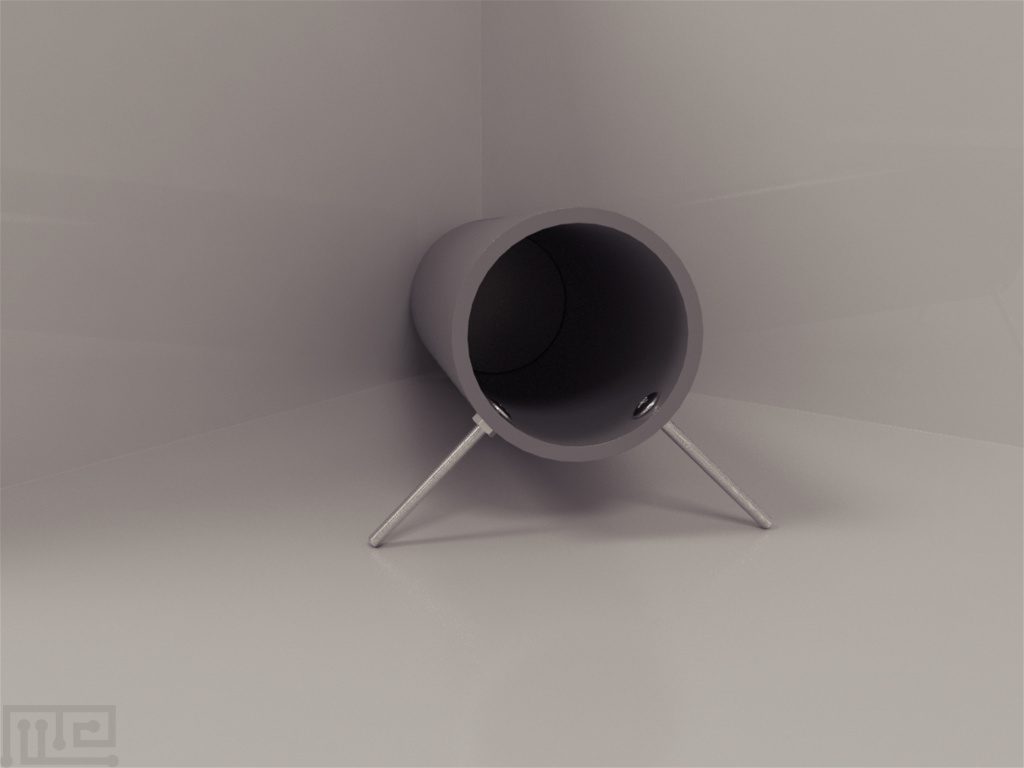 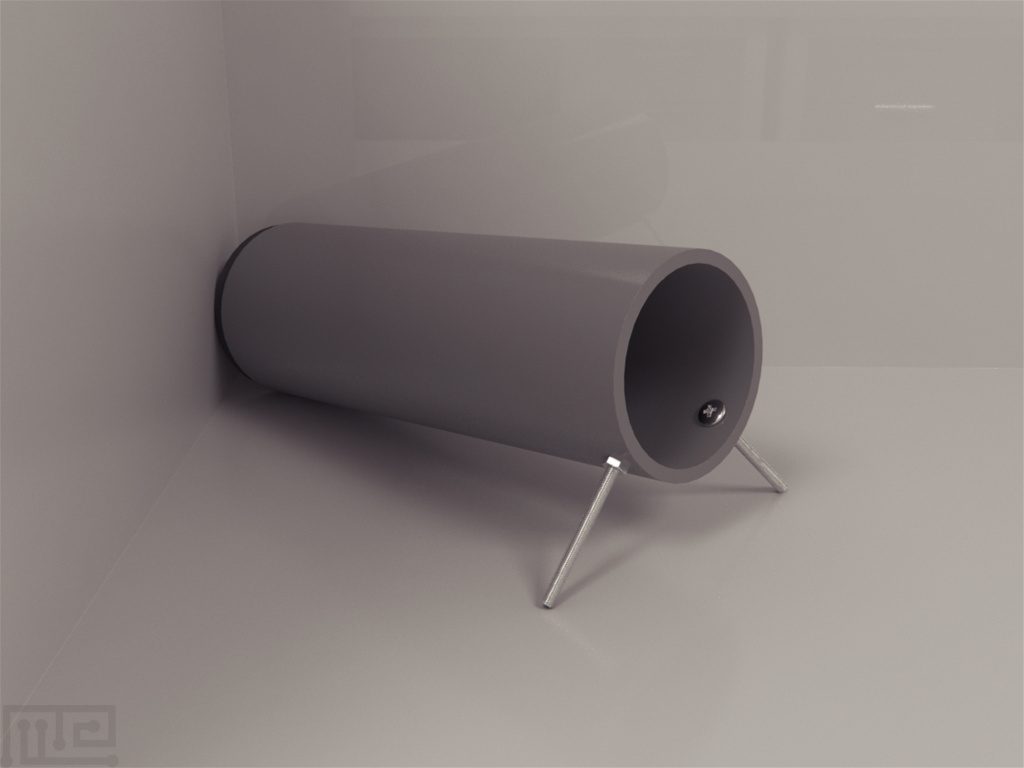 Burrowing is a sensitive behavioural assay in which mice or rats spontaneously empty a tube filled with food pellets, gravel or other substances and is a sensitive test to various pathologies including prion diseases and inflammatory conditions,

Acrylic tubing with a 1cm fiberboard backing is included and sealed with a waterproof adhesive. Each tube comes legging on the proximal side for elevation off of the floor

The apparatus comes in sizing for mice and rats. Discount for sets of 4 included.

The Burrowing tube test is used to study burrowing behavior of small animals defined as the displacement of food from the burrowing tube into the surrounding area, first described in the laboratory mice by Deacon et al.,2001. Schmid-Holmes et al. studied burrowing behavior of mice in their natural setting. During the spring season, the burrow entrances were found with enlarged holes and considerable debris/grass. So, this intrinsic behavior was described as spring/ burrow cleaning behavior.

Burrowing should be distinguished from several other similar behaviors as described by Deacon et al., like hoarding which is described as the material being carried from the tube to be stored somewhere else or digging which is when rodents dig into their new bedding after cages are cleaned. Deacon et al. proposed that burrowing in mice is analogous to human “activities of daily living” (ADL) and disruption of the ability to perform ADL is often one of the earliest signs of neurodegenerative diseases such as Alzheimer’s disease (AD). Cognitive testing which is time-consuming and requires expensive equipment is generally used for preclinical behavioral screening of new treatments for AD. However, the inexpensive burrowing test can be used as a behavioral assay for screening as it is found to be sensitive to strain differences, drugs, inflammatory mediators and hippocampal brain lesions in rodents. Burrowing is also considered as an assessment tool for animal welfare.

The burrowing tube is made up of a waterproofed acrylic glass tube, elevated slightly at the open end to prevent accidental displacement of materials and sealed at the other end. The subject is placed in a plastic cage with the burrowing tube filled up with the contents. Two measurements of the mass of the burrowing tube contents are taken to analyze the results.

The subjects are housed in groups of 3–5 in plastic cages with wood chip bedding in rooms with a 12-hour light-dark cycle. Place a full burrow overnight into the group home cage of subjects which are later to be tested. Each burrow is filled with 200 grams of the food pellets normally supplied as diet.

Two burrowing tests will be run 48 hours apart. Before starting the test, clean a plastic cage to remove the presence of any unwanted stimuli from influencing the performance. The tests should be performed in a sound isolated test area that is well-lit. The test is started 2 to 3 hours before the start of the dark phase of the light-dark cycle. Weigh the substrate to be tested and place it in the burrowing tube. Place the tube and water in the plastic cage. Remove one of the subjects from the group cage and place it in the burrow test cage. Weigh the contents of the burrowing tube after 2 hours and return the contents back in the tube. Leave the subject in the cage overnight. Weigh the contents of the burrowing tube the next morning. Return the subject back into their group cage. As per the experimental question, different substrates can be tested for burrowing behavior including food pellets, pea shingle, clay balls, wood chip bedding, and sand.

After administration of the treatment under study, the test is conducted in the same manner as described above in the baselining stage.

Deacon et al., first described the burrowing behavior while studying prion disease in mice. The study involved injecting scrapie-infected brain homogenate into the intra-hippocampal region of mice and observing their open field activity. During the observation, it was noted that mice dug out food using their feet, this displacement was referred to as burrowing. There was a decrease in burrowing as the open field activity increased around 12 weeks after injection. Later on, mice developed motor dysfunction, suggesting that decrease in the burrowing was not due to motor impairment. Hence, preclinical prion disease and its treatment can be assessed using burrowing as an objective and sensitive measure of animal’s behavior.

Evaluating Burrowing in rodents as a sensitive method for detecting behavioral dysfunction.

Evaluation of Burrowing as a behavioral assay

Deacon., conducted a systemic study to assess burrowing behavior using five different burrowing substrates in five rodent species including rats, mice, hamsters, gerbils and Egyptian spiny mice. The study showed that the species that dig burrows in their natural habitats like rats, mice, hamsters, and gerbils also burrowed earth like substrates in the laboratory conditions, while Egyptian spiny mice showed very little burrowing as it does not dig burrows in the wild either.

Although the study was not looking at sex differences in burrowing behavior, they noticed that male gerbils burrowed more than females. They also noted that subjects showed an increase in their burrowing behavior after repeated tests, but the results were not statistically significant. The study suggested that burrowing can be used as a simple test to detect neurobehavioral toxicity and monitoring of chronic neurodegenerative diseases in rodent models.

Evaluation of Assessing Burrowing, Nest Construction, and Hoarding in Mice

C57~BL/6 mice, most commonly used genetically modified laboratory mice were used by Deacon., to characterize ADL in mice which can then be translated to characterize human ADL and study treatments for neurodegenerative diseases like Alzheimer’s disease.

The following measurements are recorded during the test:

The burrowing tube test is a simple, sensitive, cheap and non-invasive behavioral test to study burrowing behaviors of different animal species including transgenic or genetically modified animals. It can be useful in research of neurodegenerative diseases like Alzheimer’s disease, prion disease, hippocampal lesions and to study different pharmacological treatments for such diseases.

Burrowing has been shown in different studies to be a rewarding activity in laboratory rodents as it can motivate them to perform operant tasks. Hence, it can be used as a form of environmental enrichment and an indicator of well-being.