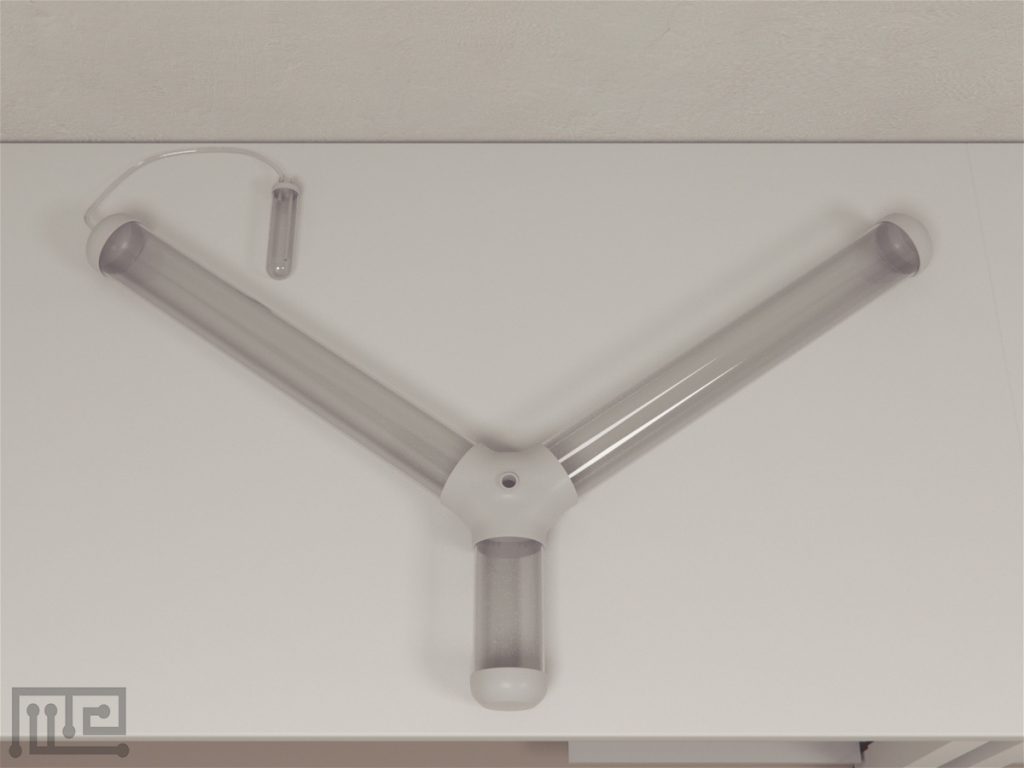 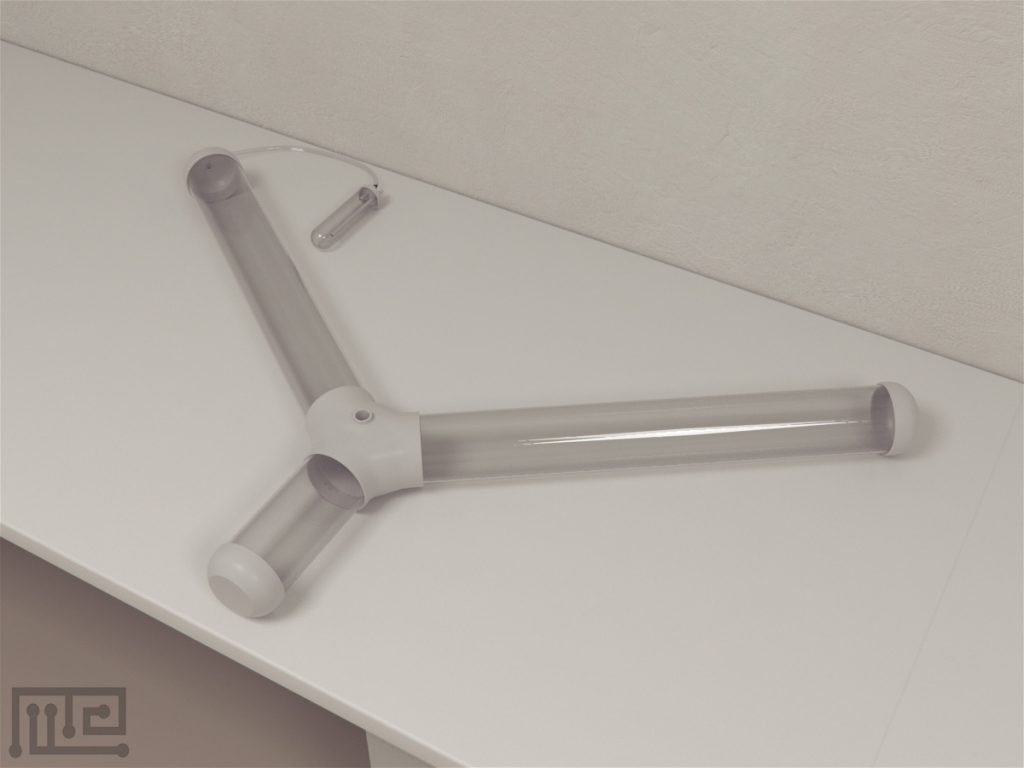 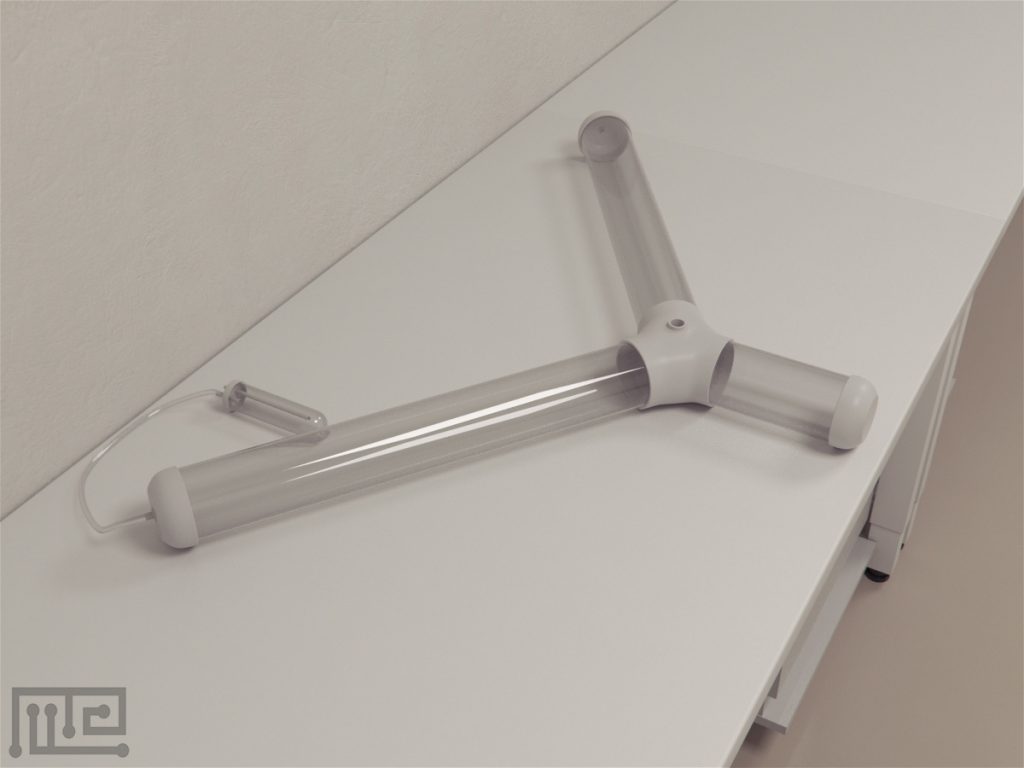 The Caterpillar Y-maze is Y shaped, with two symmetrical arms and one longitudinal section. It was created in an experiment by Douglas J. Blackiston et al. (2008), to access memory retention during metamorphosis.

During an experiment, the larvae make choices between the arms that represent their olfactory memory imprint.

The caterpillar Y-maze allows the experiment to be conducted with larvae and adult moths moving freely for ten minutes, at which time their positions are scored.

Mazeengineers offer the caterpillar Y-maze. Custom coloring and customization  are available upon request.

Caterpillar Y-maze is a learning task to measure memory retention in moths through metamorphosis. It involves sensitizing larvae to scented air coupled with mild electric current and later testing adults for memory preservation and odor avoidance.

Caterpillar Y-maze is developed by Douglas, Elena, and Martha (2008). It is based on the belief that Lepidoptera flies are capable of developing memory during metamorphosis.

The goal of the maze is to investigate neuronal fate in holometabolous insects as well as to demonstrate that larvae tend to develop and preserve memory through pupation into adulthood. The maze can provide valuable ecological and evolutionary information about memory and synaptic connections in the brain. It sparks intriguing questions about the development and organization of the central nervous system.

The maze consists of a Y-shaped environ where Lepidoptera are placed, and ethyl acetate (EA) is bubbled for a specific period. The location and movement of the fly are monitored and recorded, and scores are calculated.

Air is bubbled in the apparatus through one arm fitted with a 50ml falcon tube (containing 20ml ethyl acetate) and pulled through the other arm (called ambient arm).

House the larvae and adults in the rearing containers at 14:10 light/dark cycle, 24±2ºC, and 65% humidity. Food and water should be available at all times. The task is carried out in the dark to avoid lighting differences between the arms. Animal movement and location can be tracked with Noldus Etho Vision® XT.

Classical Conditioning of Larvae and Adults to Chemical Exposure

Transfer moths at different stages of metamorphosis (larvae, caterpillar & adults) in the loading arm of Caterpillar Y-maze individually and allow free movement. Pre-condition them to EA-scented air alone, shock alone, odor prior to shock (forward pairing) and odor following shock (backward pairing) for 10 minutes. Mark and score the position of larvae and adults in the maze as EA arm, ambient air arm, and no choice (loading arm or any portion in the center).

This test is done to determine memory development and retention across larval molts. It is carried out in adult flies that exhibited odor avoidance as larvae during conditioning. After about 28-35 days of chemical conditioning, test adults for odor preference in the same way as done earlier.

Evaluation of Responses of Lepidoptera in Caterpillar Y-maze

Douglas et al. (2008) reared larvae and adults on artificial diet and allowed them to pupate under darkness. Next, they placed larvae (from third instar & fifth instar) in Y-maze and preconditioned them to odor alone and odor + electric shock for 10 seconds each. The larvae were moved back to rearing containers. The process was repeated every hour so that the total training sessions totaled up to 8 in a single day. An hour-long resting period between training sessions gave larvae ample time to relax and revert to normal feeding behavior. One day after training, the fifth instar larvae were tested for odor avoidance in Y-maze for 10 minutes. Adult flies and third instar larvae were also tested at fifth instar using the same procedure. Testing was carried out in the same manner as earlier, and the movement and position of all larvae were monitored and scored.

Larvae exposed to shock alone and naïve fifth instar caterpillars showed neither attraction nor aversion to EA. Only forward pairing of EA with electric shock produced order avoidance in fifth instar larvae (78% chose ambient air over EA air) and third instar larvae tested at fifth instar (81%). The researchers concluded that moth larvae have a working memory that can persist well into adulthood.

In order to determine whether memory persists through metamorphosis, ‘constancy score’ is calculated. Constancy is defined as the proportion of flies choosing ambient air as larvae and adults. Constancy measures of following metamorphosis stages are calculated:

Caterpillar Y-maze is perhaps the first of its kind maze to evaluate and demonstrate associative memory in Lepidoptera across metamorphosis. Moth larvae and adults can easily acclimate to the maze setting.

The maze design is simple and requires minimal training. The simplicity of design and tests permits several training sessions within a single day with ease.

The moths and larvae do not undergo any stressful training and tests in order to accomplish the task. Neither heat nor water is used to evoke a response. The food and water supply are never withdrawn.

The maze also allows for reproducibility of results across several molts. Because of its accurate score calculation and predictability of result, the maze can be used for other investigations including social interaction and drug effect, etc.

The maze performance is prone to disturbances. Several factors, such as olfactory, auditory and visual, can affect the performance and result score. The maze requires multiple cleanings after every training and test sessions.

As with other behavioral mazes, the subject undergoes several training sessions in caterpillar Y-maze. Over-handling and over-training can place undue stress on the subject and decrease its motivation. The task protocol and design need improvement to minimize the number of training requirements without compromising on the performance output.