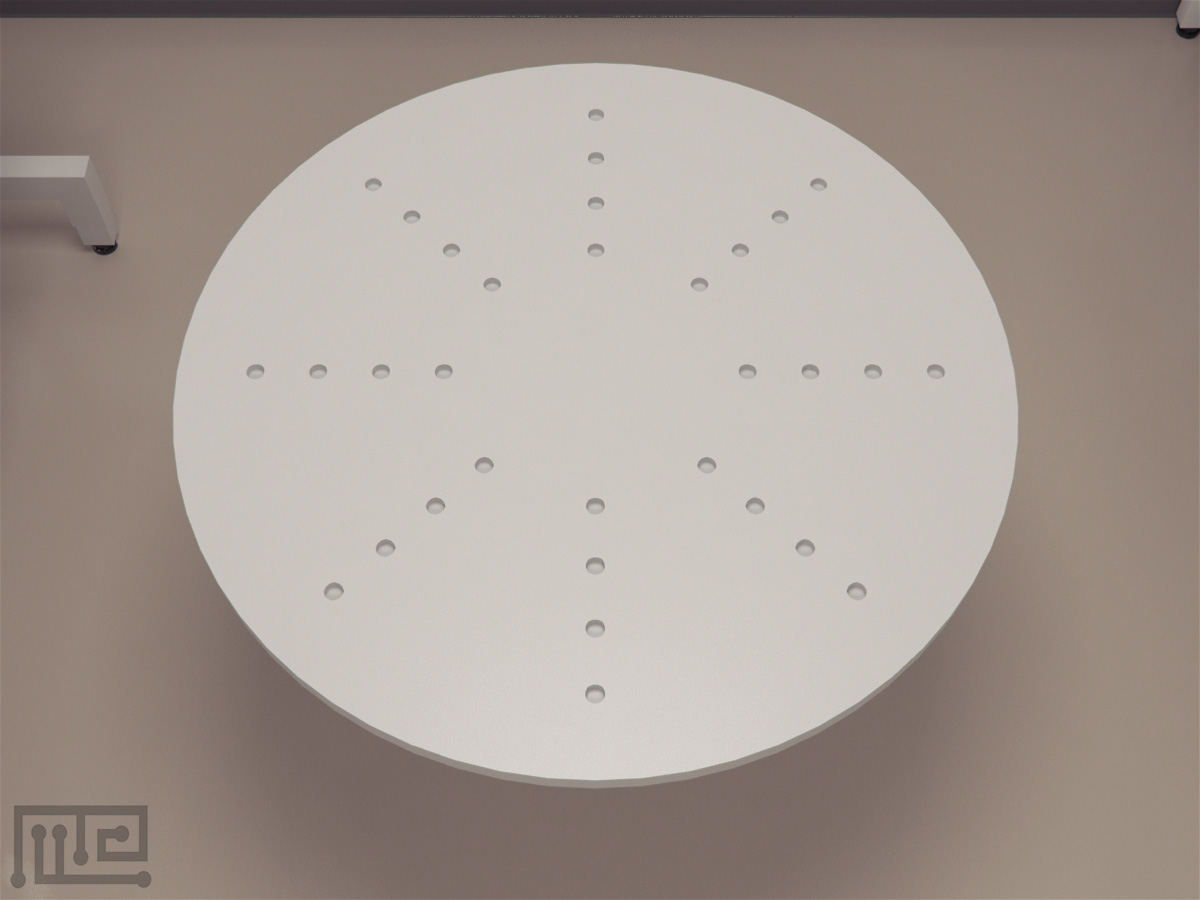 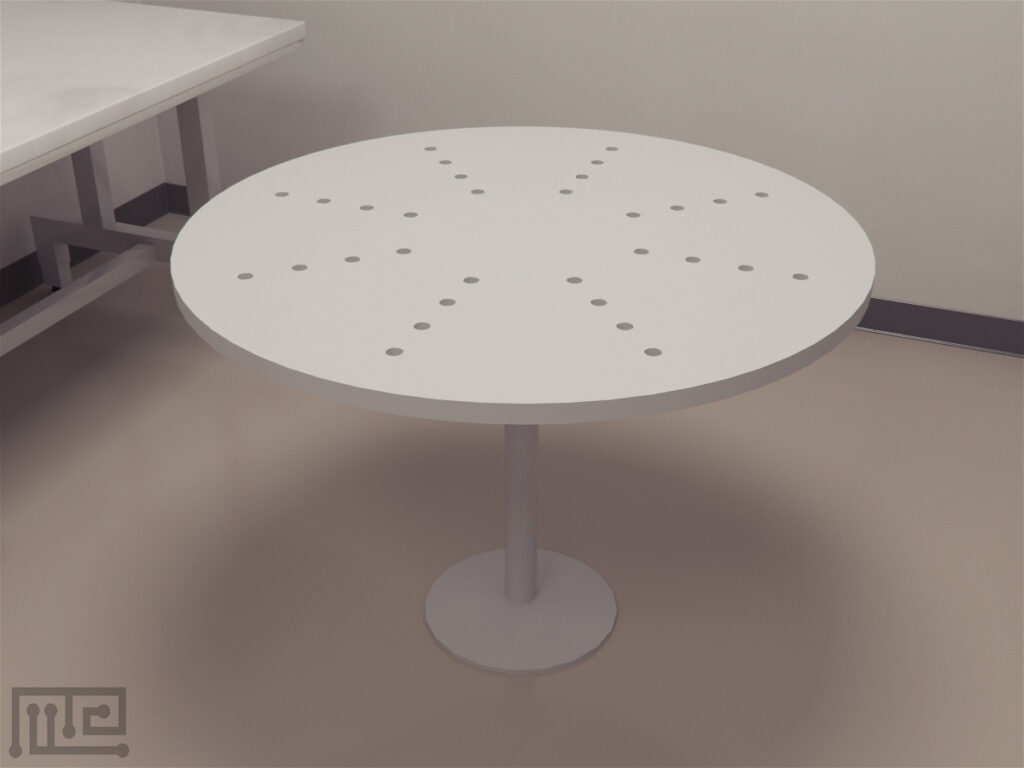 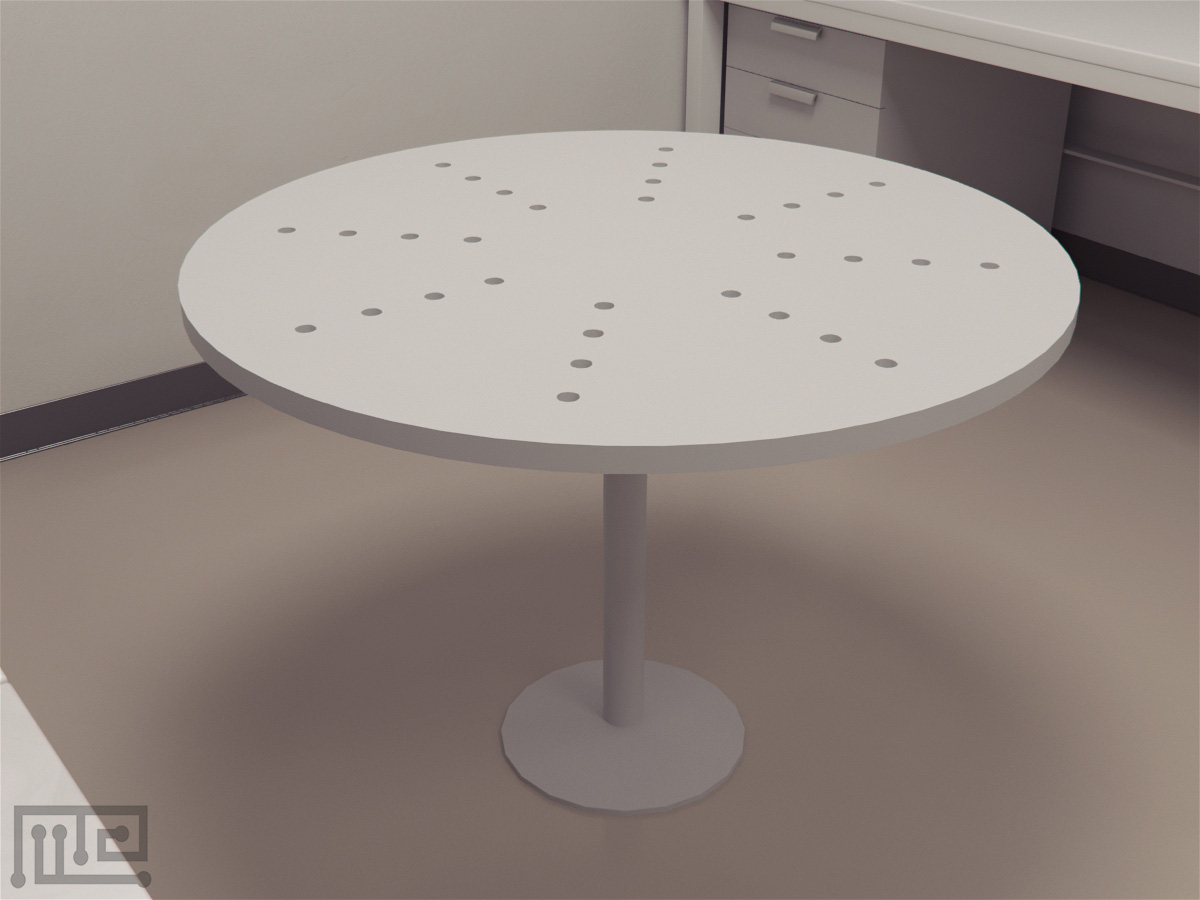 Cheeseboard Maze is a circular maze was constructed from a grey painted acrylic circular board with drilled into it. The maze is elevated above the floor and positioned in a well-lit room.

The wells were spaced radially resulting in a similar shape to the radial arm maze with wells distributed throughout the table. A total of 32 wells were drilled forming a radial pattern. The rear side of the CB was not drilled with any wells and was used for habituation.

A plastic bottle cap could be fitted inside each well. Special caps equipped with a visual stimulus in the form of a flag were used in the non-spatial test of the experiment.

The Cheeseboard Maze is a widely used behavioral task to assess spatial learning and memory in rodents. It has been widely known that rodents can learn and remember spatial locations when baited with food rewards (Karl, Bhatia, Cheng, Kim, & Garner, 2012; Lopez, Hauser, Feldon, Gargiulo, & Yee, 2010). The Cheeseboard Maze utilizes this ability to assess the working and reference memory of the rodents (Sharma, Rakoczy, & Brown-Borg, 2010).

Cheeseboard Maze provides a simple environment to assess spatial learning and memory. It is a modified version of the Barnes Maze and used as a dry alternative of the Morris Water Maze task. It comprises an elevated circular arena with 32 wells arranged in a radial pattern. The Cheeseboard Maze works on the principle of positive reinforcement, specifically hunger that motivates the subject to search for food reinforcer. The spatial memory is then evaluated by observing the efficiency and speed in reaching the reward. The Cheeseboard Maze is designed by taking into account the ethological and ecological background of rodents. It offers a dry environment and does not require negative reinforcement overcoming major issues of the Morris Water Maze (Karl, Bhatia, Cheng, Kim, & Garner, 2012; Lopez, Hauser, Feldon, Gargiulo, & Yee, 2010) The Cheeseboard Maze can be effectively used to examine cognitive impairments and phenotyping transgenic mice.

Other apparatuses to study spatial learning in rodents include the 8-Arm Radial Maze, the Hebb-Williams Maze, and the Active Place Avoidance Arena.

The Cheeseboard Maze comprises of a grey colored acrylic circular board (1.1 m in diameter and 3 cm in thickness) elevated 75 cm above the floor. The circular board has 32 wells (3.1cm in diameter and 1.3 cm in depth) drilled in a radial pattern similar to the 8-Arm Radial Maze. The rear side of the circular board has no wells. The maze is also provided with special plastic caps that can be placed inside each well. The caps are provided with a 15 cm high pole with a 3 cm long × 3 cm wide flag attached to the end of the pole.

Properly clean the apparatus to remove any residual visual and olfactory cues. Apply a film of a reward on each well at the beginning of each test day to minimize the influence of olfactory cues. Dimly lit the apparatus. During pretraining, keep the subjects in a restrictive diet. A tracking and recording system such as the Noldus Ethovision XT can be used to assist with observations.

Place the subject in the center of the undrilled side of the maze and confine it to this area with the help of a semitransparent beaker. Remove the beaker and allow the subject to explore the maze for 2 minutes. Conduct two trails/day with a 1-minute inter-trial interval for five consecutive days.

Now conduct the visual discrimination task by selecting a random well on the drilled side of the Cheeseboard Maze. Mark this well with a flagged plastic cup and place a food reward in it. Conduct the trial by placing the subject in the middle of the maze and confining it with the help of a beaker. Remove the beaker and allow the subject to explore and search for the reward for 2 minutes. End the trail once the subject finds and completely consumes the food reward. If the subject couldn’t find the reward within 2 minutes, then guide and place the subject next to the reward. Conduct two trails with a 1-minute inter-trial interval.

Choose a random well in the Cheeseboard Maze and place a food reward in it. Place the subject in the middle of the maze and confine it with the help of a beaker.  Now remove the beaker and allow the subject to explore and search for the reward in the maze for 2 minutes. Conduct two trails/day with 1 minute inter-trial interval for five consecutive days.

Choose a random well in the Cheeseboard Maze and place a food reward in it. Place the subject in the middle of the maze and confine it with the help of a beaker.  Now remove the beaker and allow the subject to explore and search for the reward in the maze for 2 minutes. Keep baited well the same across two trails on a single day. Perform two trails/day for 16 consecutive days. Keep an inter-trial interval of 1 minute in the 1st  four days of the task and increase it to 15 min on 5th  to 8th day, 1 hour on 9th to 12th, and 2 hours on the 13th day and onwards.

Lopez, Hauser, Feldon, Gargiulo, & Yee (2010) investigated spatial learning and memory in 8-week old C57BL/6 mice. The differences and similarities between the Cheeseboard Maze and the Morris Maze test in assessing spatial memory were investigated. In both mazes, subjects (n=8) were first pretrained using the visual cue task, and then their working and reference memory were assessed. The results for the reference memory attainment task in the Morris Maze test showed a reduction of escape latency over days and trails. While in the Cheeseboard Maze test, reduction in latency to obtain reward was observed during the initial four days of the task and increased in the 5th day, which is attributed to the significant main effect of the days (F(4,44) = 19.33; p < 0.001). The working memory function of subjects in Morris Water Maze showed a reduction in escape latency in the long inter-trial delay (1 h) compared to the short inter-trial delay(1 min). While in the Cheeseboard Maze, the subjects showed a reduction in latency to reach rewarded well with short inter-trial delays (1 min and 15 min) compared to long inter-trial delays (1 h and 2 h). The results of the correlative analysis of individual performance difference showed significant correlation in the measure of reference memory attainment (n=12, r = +0.65, df = 10, p < 0.05),  while no significant correlation was observed for individual differences in terms of reference memory retention (r = 0.002, df = 10, p > 0.05), or working memory function (r = 0.01, df = 10, p >0.05). The results of this study concluded that the cheeseboard Maze could be an effective alternative of the conventional Morris Maze to assess spatial learning and memory in mice.

The task performance is carried out in the absence of aversive cues such as high light intensity, loud noise, wind, or water. Therefore, it imposes minimum stress to the subjects. Compared to the alternative Morris  Water Maze, the  Cheeseboard Maze exhibits a dry environment that minimizes the stress in subjects.

The number of potential reward sites, as well as their comparative spatial distribution, may increase task difficulty in the Cheeseboard Maze. The food deprivation may cause stress to the subjects. The Cheeseboard Maze has a single starting point compared to the Morris Maze with multiple starting points. However, the issue is resolved by using the random head direction of the subject by confining it in the center of the maze with the help of the beaker.