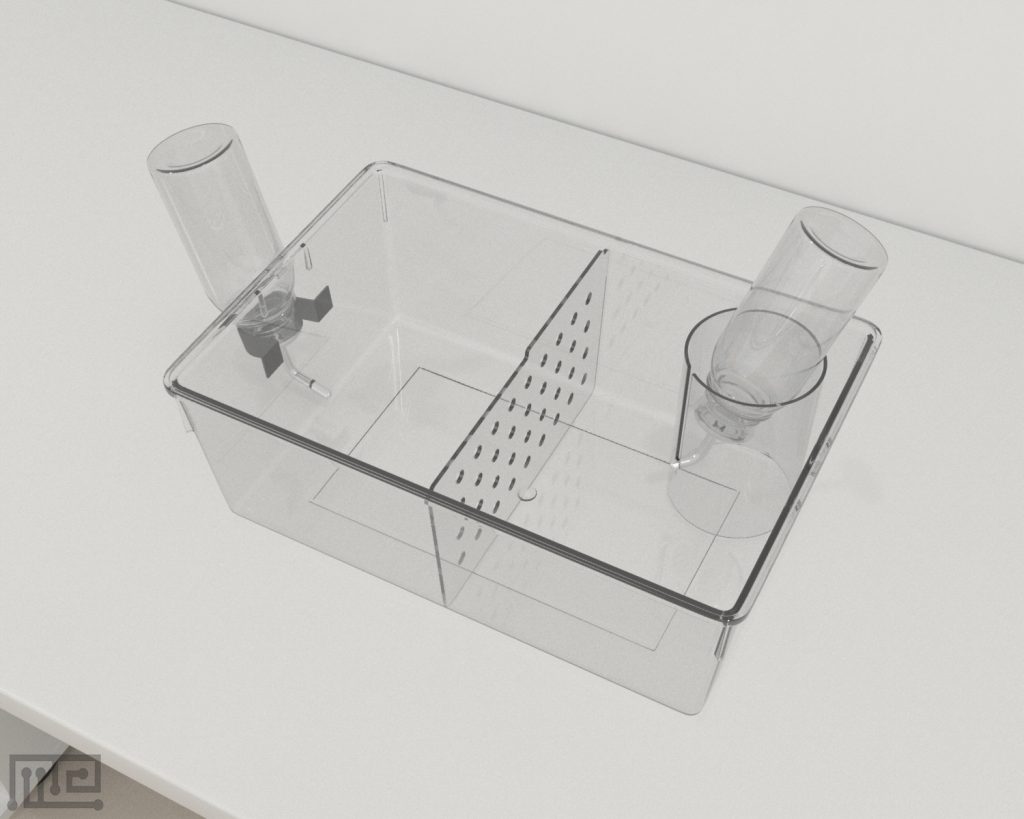 It is a standard rat cage with a perforated Plexiglas divider in the center of cage. The divider will physically separate the mice after defeat sessions and allow for sensory interaction during non-defeat housing periods. A cylinder (additional water bottle holder) is placed on side opposite of standard water bottle side. It also contained an assembled water bottle with cylindrical holder.

The Chronic Social Defeat Stress is a well-validated behavioral assay used for the investigation of depression and anxiety-like behavior in rodents. This apparatus uses the “social defeat stress” paradigm, which involves a social conflict between conspecifics to generate psychological and emotional stress (Kim, Call, Carotenuto, Johnson & Ferguson, 2017).

Various stress induction-based assays have been previously employed to understand the neurological mechanisms behind psychiatric illnesses like depression, anxiety, post-traumatic stress, etc. These assays include foot-shock stress, immobilization stress, chronic unpredictable stress followed by measurement of depressive symptoms through the tail suspension and forced swim test (Krishnan & Nestler, 2011). However, these models are not validated and are not good enough to extrapolate to human depressive behavior (Krishnan and Nestler, 2011; Kim et al., 2016). Compared to these models, social defeat stress is a well-validated model that has been proven to effectively induce emotional and psychological changes similar to the symptoms of psychiatric illnesses like depression, anxiety, etc., (Kim et al., 2016; Kim, Call, Carotenuto, Johnson & Ferguson, 2017; Russo & Nestler, 2013).

The Chronic Social Defeat Stress apparatus is composed of a standard rodent cage partitioned from the center by a perforated divider creating two compartments. The apparatus is similar to the Social Defeat Apparatus. However, this apparatus is provided with an extra cylindrical holder along with a  water bottle. Using this apparatus, subjects are exposed to physical stress by creating a confrontation between resident and intruder subjects, followed by a period of sensory stress. The stress-induced depressive phenotypes generated through this apparatus are long-lasting and are reversible. The Chronic Social Defeat Stress apparatus can be effectively utilized to understand psychiatric diseases other than depression like anxiety and post-traumatic stress.

Other apparatuses to study depression and anxiety-like behavior in rodents include the Tail suspension test,  the Forced swim tests, the Zero maze, and the Light Dark Box.

Chronic Social defeat stress apparatus is composed of a standard rodent cage made up of plexiglass. The cage is provided with a detachable perforated plexiglass divider (34.7 cm in length x17.9cm in height) with holes measuring 1.2 cm in diameter. The divider is placed in the center of the cage and divides the apparatus into two equal compartments. One side of the cage is provided with a standard water bottle with a stopper and a sipper tube, whereas the opposite side is provided with a detachable plastic cylindrical holder (11.5 cm in diameter x 17.7 cm in height) carrying another water bottle.

Place the resident aggressor in one compartment of the Chronic Social Defeat Stress apparatus and allow it to acclimatize overnight.

Take the intruder from its home cage and load it in the same compartment of the chronic social defeat stress apparatus where the aggressor was housed.  Allow 5 to 10 minutes of social defeat and then transfer the intruder to the adjacent compartment of the cage separated through a perforated divider. Maintain sensory contact of both intruder and resident by keeping the intruder in the resident’s home cage for 24 h. Repeat session daily for 10 consecutive days each time with a new aggressor. After the last session, keep all intruders in the same home cage, while singly house the aggressors in separate home cages.

For the control group, two control subjects are placed in a separate chronic social defeat stress apparatus, one in each compartment separated with perforated divider for a period of 10 days. In the intruder side of the cage, daily swap the control subjects.

Load the subject into the Chronic Social defeat stress apparatus where the aggressor is housed. Allow 5 minutes of social defeat, then shift the subject to the adjacent compartment to maintain sensory contact with the aggressor. Repeat the task two more times with a new aggressor and with a 15-min interval between each session.

Kim, Call, Carotenuto, Johnson & Ferguson (2017) investigated depression in C57BL/6J mice. The study involved two groups i.e., controls and the stress induction group. Chronic social defeat stress was imposed using Chronic Social Defeat Stress Apparatus. C57BL/6J mice were exposed to CD-1 aggressor mice to allow physical confrontation that results in social defeats, followed by a period of sensory stress. The task was repeated for 10 consecutive days. For the control group, two mice were placed in separate compartments of chronic social defeat stress apparatus for a period of 10 consecutive days. The social interaction task was then performed in the social interaction arena to understand depression in C57BL/6J mice. Defeated C57BL/6J was placed in the interaction zone of the arena in the absence of a CD-1 target mouse and allowed to explore the arena for 2.5 minutes. The defeated mice were then placed back to the home cage, and the CD-1 target mouse was then introduced in the arena. The defeated mouse was reintroduced in the presence of target CD1, and both mice were allowed to explore the arena. Chronic Social defeat stress resulted in mice with two depressive phenotypes i.e., susceptible group and resilient group. Results indicated that the control group spent more time in the interaction zone, whereas defeated mice spent less time in the interaction zone and more time in the corner zone (p<0.01).  Social interaction was decreased with ‘target’ CD-1 mice in the susceptible group (n = 18) after social defeat stress, but not in control (n = 23) and resilient groups (n = 13). This research concluded that the chronic social defeat paradigm could be effectively used to understand depression and anxiety-like behavior in mice.

The chronic social defeat stress is a well-validated assay. The apparatus is easy to assemble, and the presence of detachable parts makes it easy for cleaning. The apparatus can generate both susceptible and resilient depressive phenotypes that make it effective to differentiate between depression and anxiety-like behavior. The depressive phenotype generated by chronic social defeat stress is long-lasting and can be reversed.

The chronic social defeat stress is easy to use; however, task performance is tiresome and time-consuming. The apparatus requires repeated handling, which may cause stress to the mice. External factors like surrounding cues and the aggression level of the animal may cause variations in the observations.