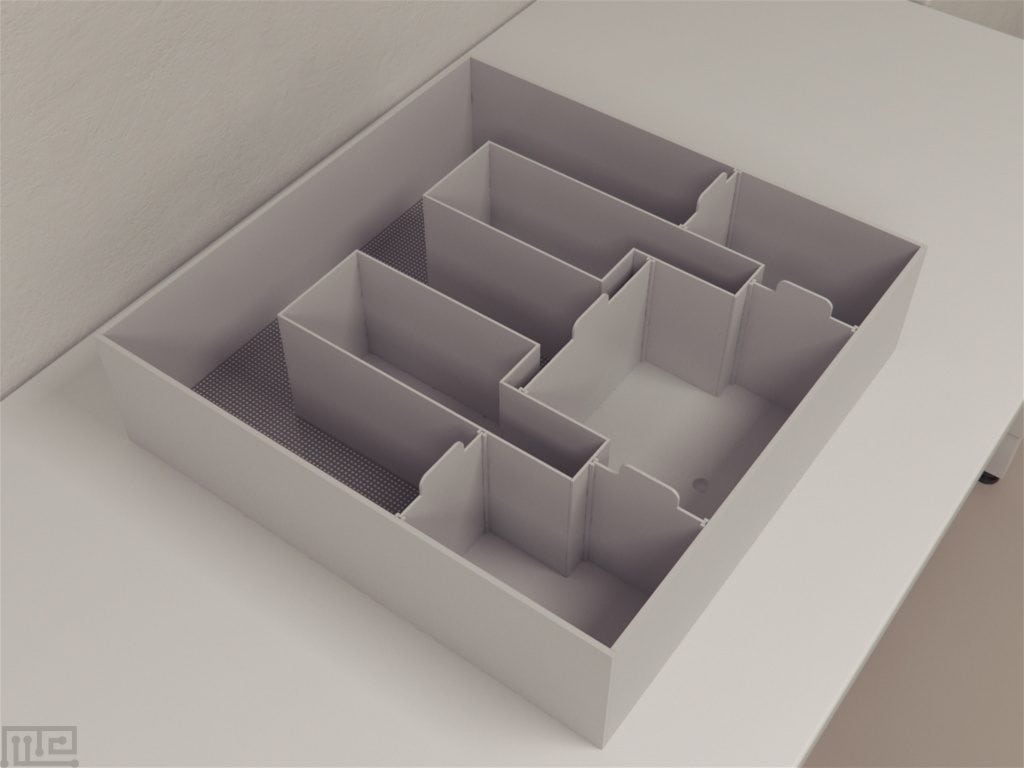 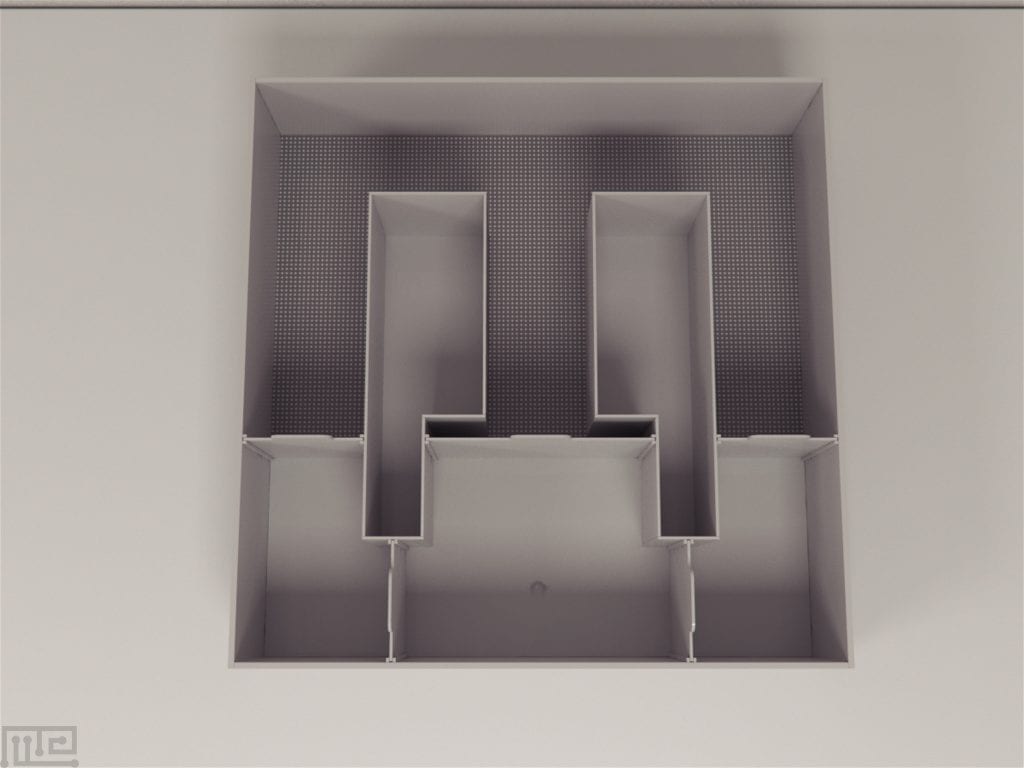 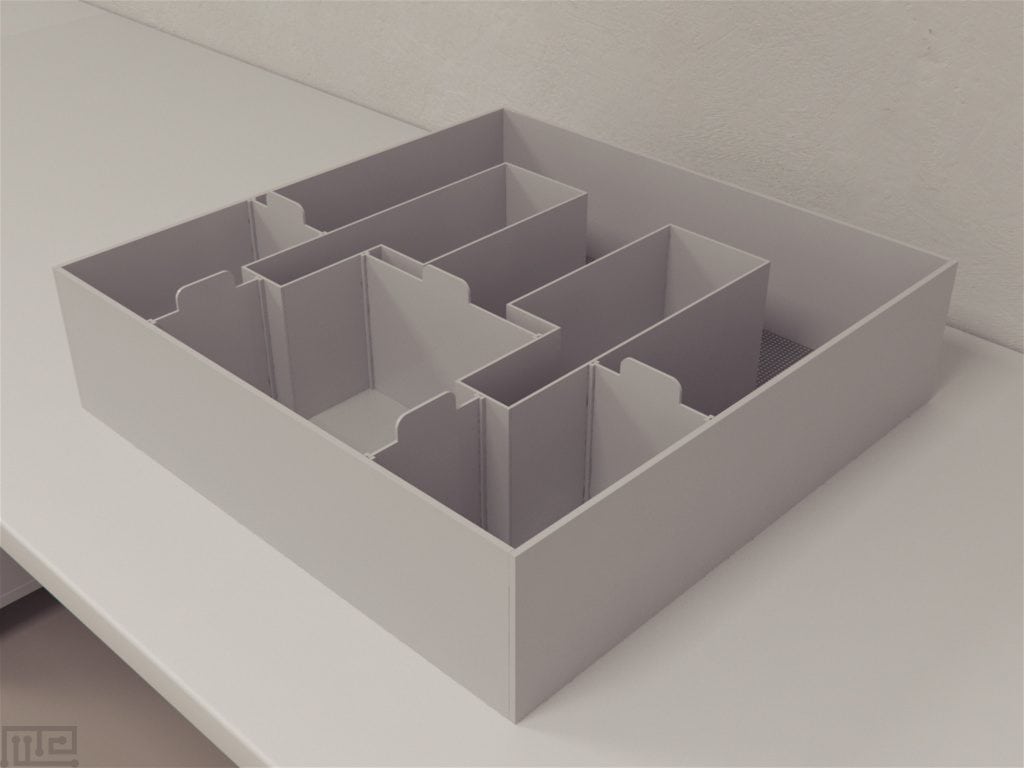 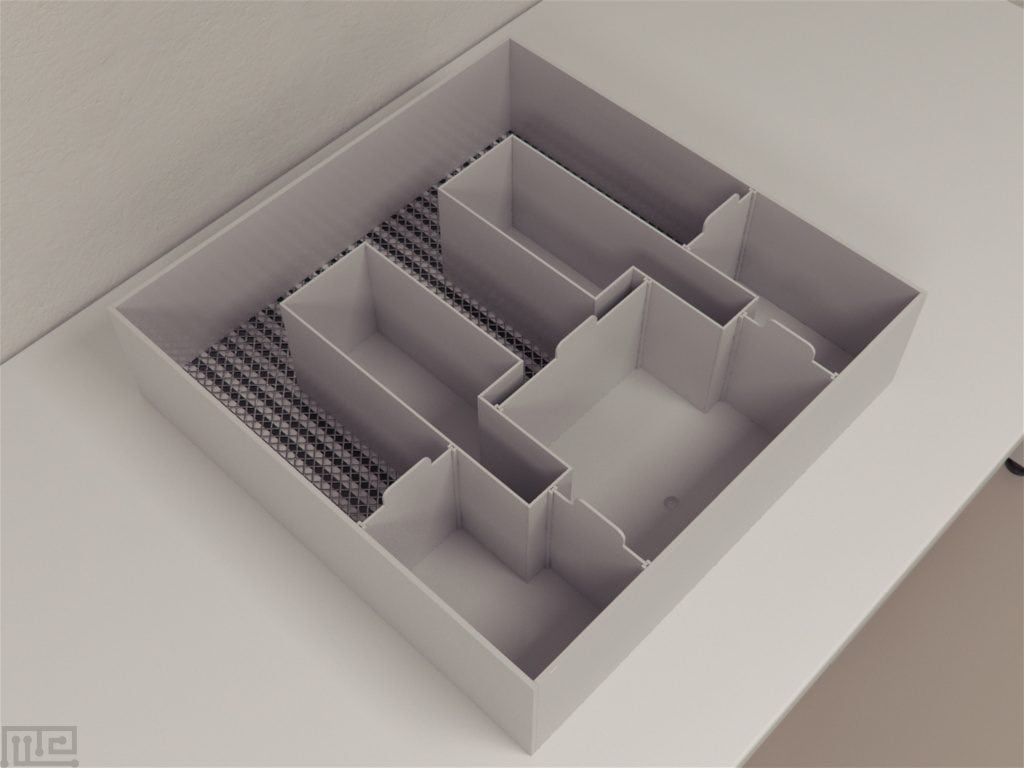 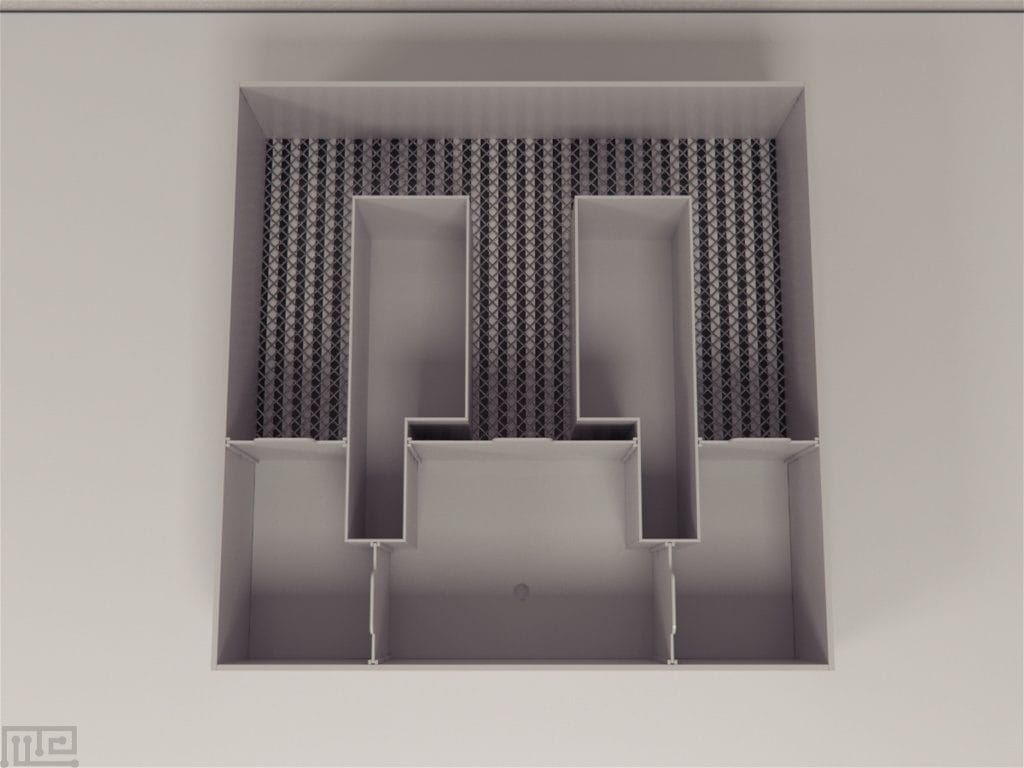 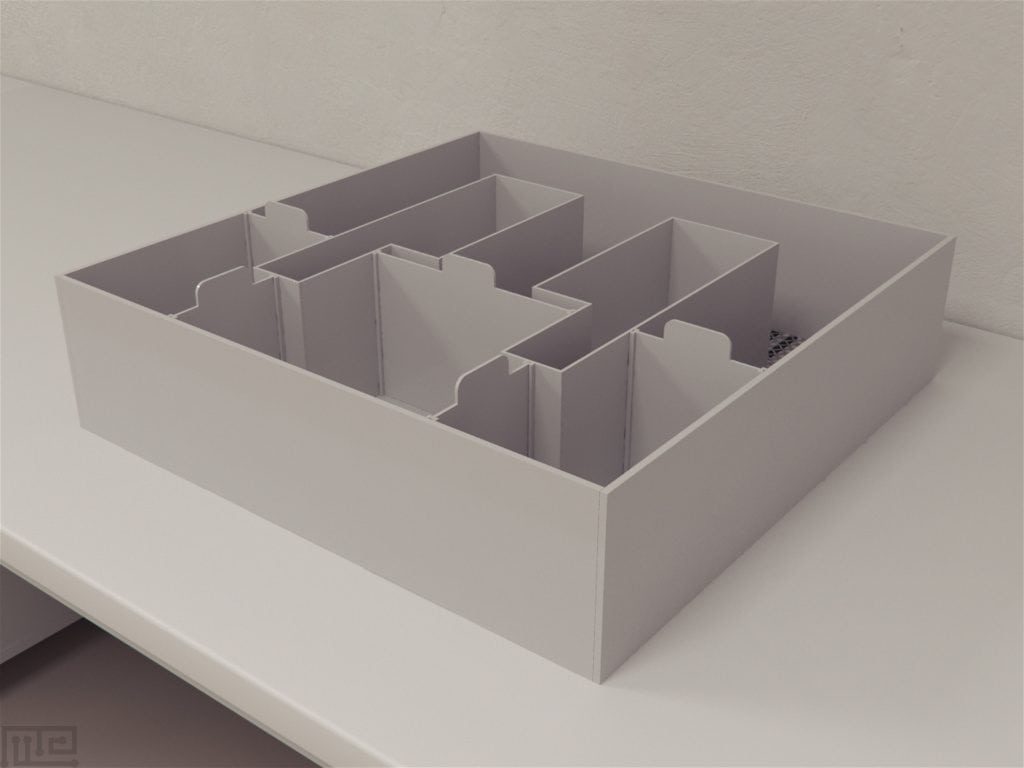 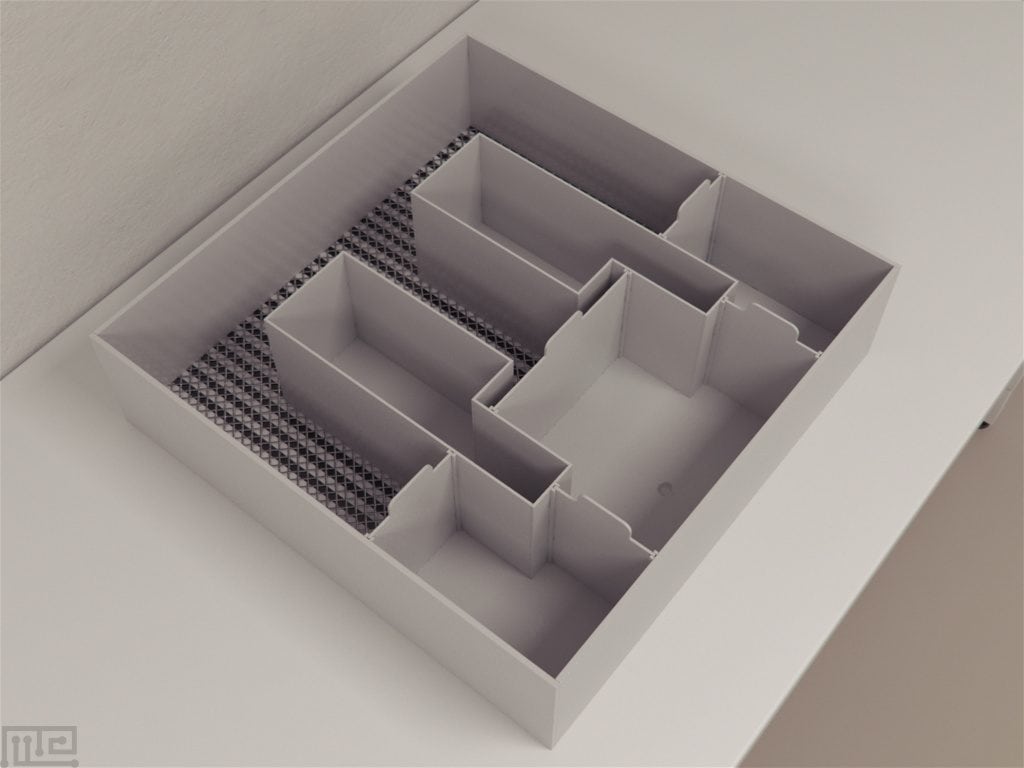 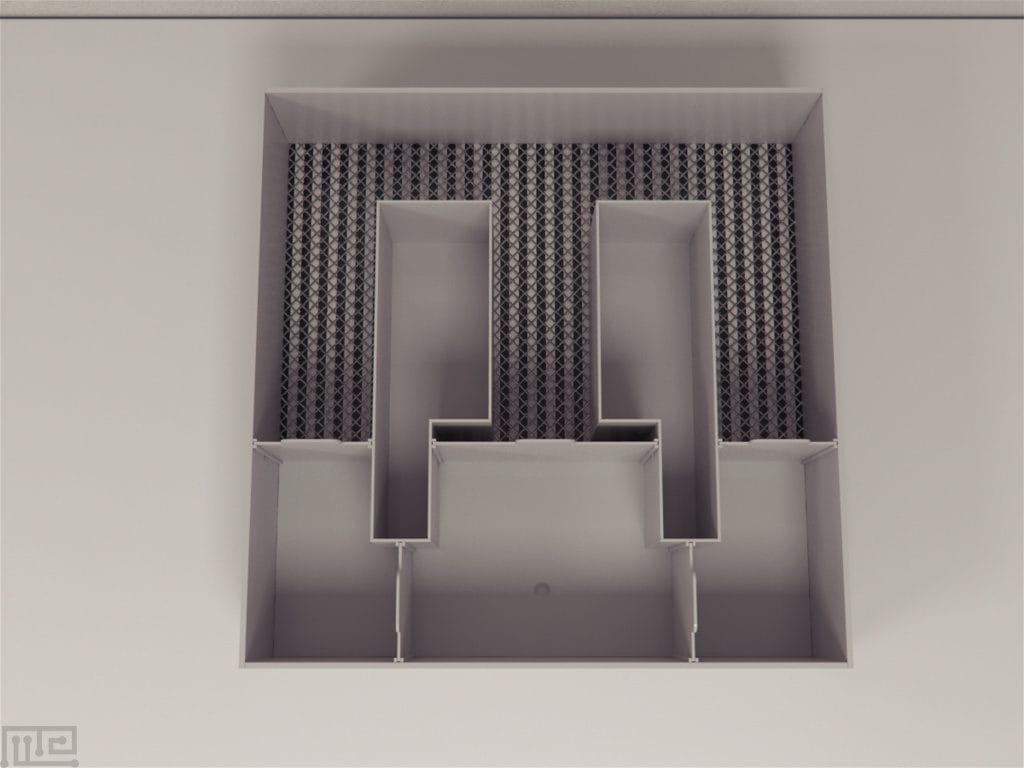 The Continuous NOR chamber was first described in the literature by  Ameen-Ali et al (2012) as a way to improve on the classic NOR Delayed nonmatch to sample (DNMS) studies. The square shaped apparatus holds an E-shaped object area which is adapted for different contexts

During sample and test phases, objects are placed in the top left and top right-hand corners of the object area of the maze approximately 2 cm away from the wall.

There are four contexts in the chamber, all of which are included in the MazeEngineers apparatus.

Context 3: Black and white horizontal stripes with a wire surface

Context 4: Black and white vertical stripes with a wire surface

The Continuous Novel Object Recognition uses the principles of both delayed non-matching to sample and spontaneous object recognition tasks. By combining both of these tasks and allowing multiple trials to take place in one session, while at the same time reducing handling stress, this apparatus serves as an improvement of the Bowtie Maze and the Novel Object Recognition chamber. (Ameen-Ali et al., 2012)

The Continuous Novel Object Recognition chamber works through the provision of a holding area, where the subject remains before and after each trial, and an object area, where the testing takes place. The testing takes place either through placing a novel or a familiar object. The chamber is designed to be able to accommodate four different contexts while allowing multiple trials to take place in a single session with minimal handling. (Ameen-Ali et al., 2012)

The apparatus is square shaped with an E-shaped object area, which is rotatable to reveal different contexts (there being four contexts in total) and an E-shaped holding area, which is a table that contains food well. The apparatus is 59 cm long and 59 cm wide. The two E-shaped areas are separated by opaque guillotine doors which can be easily opened or closed by the experimenter. The outer arm door is 12 cm long, and the central arm door is 24 cm long.

During the test and sample runs, the objects are placed in the top left and top right corners of the object area to accommodate exploration by the animal.

Each task uses various junk objects of various sizes, shapes, colors, and textures. Identical objects are used in every trial, but no animal encounters the same object again within an experiment.

The subjects are given two sessions of handling by the experimenter and two sessions of habituation to the testing room, in which the subjects stay in their cage for a period of 10 minutes per session to acclimatize to the room. Testing is done under diurnal conditions, with all tasks being carried out during the light phase.

The pre-training consists of five phases which are aimed at habituating the subject to the procedure and the environment. The pre-training is carried out over a period of 5 days.

Phase 1: It involves placing the subjects into the apparatus in pairs or groups of three, depending on how they were housed, for a period of 30 minutes. Free exploration is allowed.

Phase 3: Repetition of phase 2 but for a period of 10 minutes.

Exploration of objects is defined as the subject’s nose being <1cm from the object or the nose/paws of the subject touching the object. Exploration time is measured by a computerized stopwatch or a video tracking system.

Two groups of subjects are used for this task: the first group consisting of subjects from the first task and the second naïve group. Each subject was given a single testing session of 16 trials. This task is similar to the previous one except that a sample phase occurred before each trial in which the subjects were exposed to two identical copies of an object, which would then act as the familiar test subject for that trial. Like the previous task, only context 1 is used. This task allows comparison of the two groups regarding exploration and recognition of the objects.

Subjects used in the first two tasks are used in this task. Each subject is given a single test session of 16 trials. The experiment begins with a sample phase where the subject is exposed to two novel objects (object A and B) for 2 minutes. The subject is then shuttled to the holding area, which contains two food pellets. After 1 minute, the subject is shuttled to the object area to begin the test phase. The subject is then exposed to two duplicate copies of one of the objects shown in the sample phase. One of the copies is placed in a novel location, while the other copy is placed in a familiar location. Context 1 is used in this experiment as well. This experiment is designed to test object-location memory and producing significant levels of novel object-location recognition.

Subjects from the second group in the second task are used in this experiment. The subjects are given three further sessions of habituation that consist of habituating the subjects to contexts 2 and 3, encouraging the subjects to shuttle between the two areas with each of the two contexts and object habituation with the two new contexts. Due to the increased number of sample phases, each session consisted only of eight trials. The experiment begins with a sample phase in which the subject is exposed to duplicate copies of the same object in a particular context for 2 minutes. The subjects are then shuttled to the holding area for 1 minute, which contains two food pellets. They are then shuttled to the object area containing two identical copies of a different object in a different context for a period of 2 minutes. The subjects are then shuttled into the holding area for 1 minute after which the animals are shuttled to the object area for the test phase. The subjects are exposed to duplicate copies of the objects seen in the previous two sample phases in a context also previously seen. (Ameen-Ali et al., 2012)

Analysis of the data collected is done by comparing the exploration time of the subjects to see if they preferred the novel objects or the familiar objects more. Exploration time is defined as all the time the subject spends with its nose less 1 cm from the object or the object being touched by the subject’s nose or paws. Climbing on top of the object was not considered. Duration of the exploration is measured by a computerized stopwatch or a video tracking system.

The following sample data shows the mean exploration time of the novel and familiar objects for all four experimental tasks.

The Continuous Novel Object Recognition chamber allows the use of fewer animals for experimentation as multiple trials can take place with minimal handling compared to previous studies with other apparatuses.

Some of the methodological issues presented through spontaneous object recognition tasks have been addressed through the design of the Bowtie Maze by using the subject’s natural tendency to explore novel objects, while at the same time carrying out multiple trials in a single session (Albasser et al., 2010). However, in spite of these improvements, the spontaneous object recognition paradigm in the Bowtie Maze tasks was not comparable with other paradigms in the literature, making it difficult to compare data across various studies. Hence, to address this issue, the novel paradigm, Continuous Novel Object Recognition, was formulated which combines the design of the Bowtie Maze with features of the DNMS tasks. (Ameen-Ali et al., 2012). It also allows more complex recognition tasks to be carried out like object-location and object-in-context tasks.

There is a tendency for some animals not to shuttle properly between the two chambers in all of the experiments, which can affect the results.