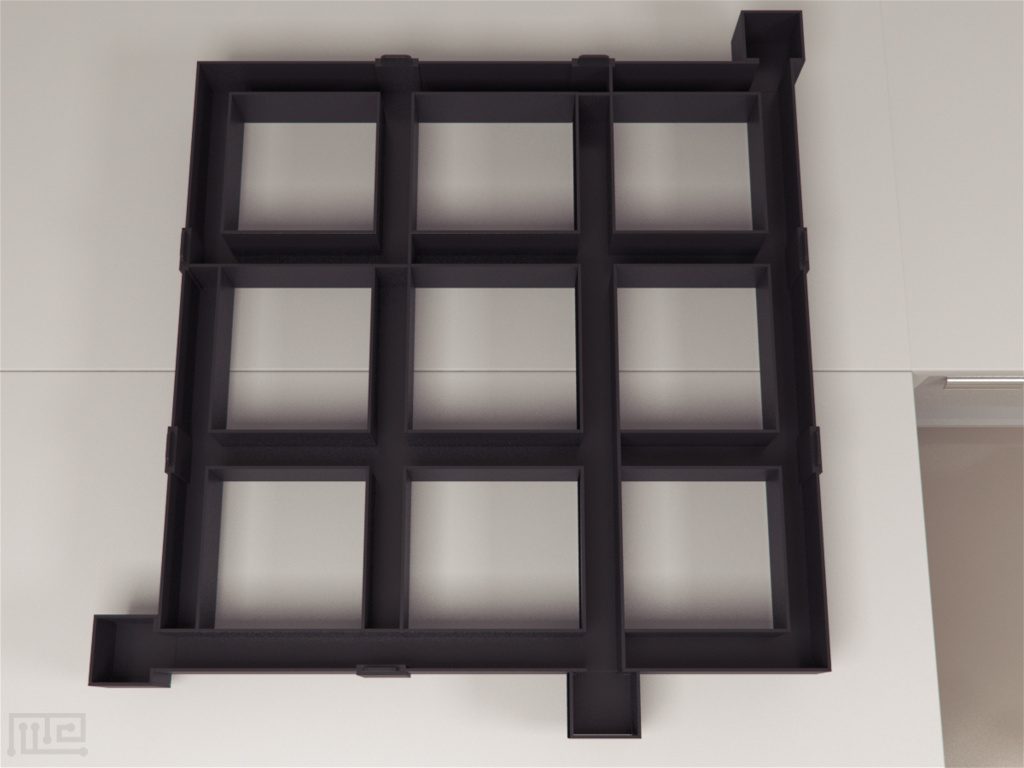 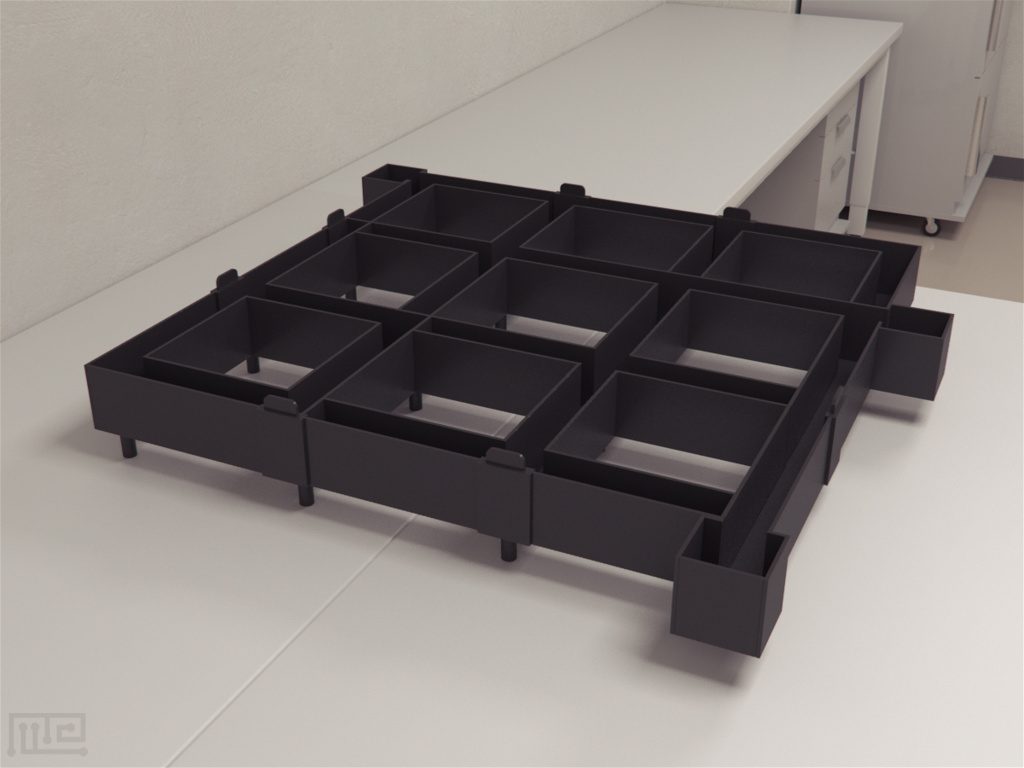 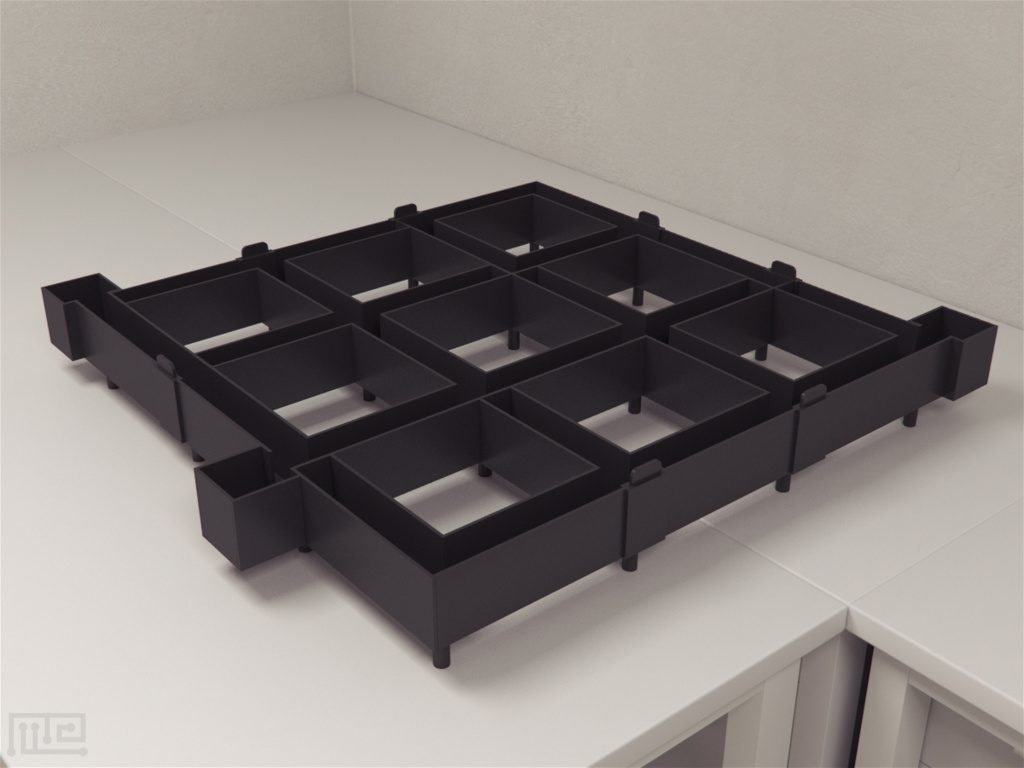 Crossword Maze is a learning paradigm to study the process of memory stabilization and reactivation. First discussed in the literature by Colin, Alvaro, Stephanie, Natalia, and David (2014), this maze consists of boxes and intersections to allow allocentric spatial learning in rodents.

Sizing for both mice and rats available. This maze is useful for applications of spatial learning of new goal locations and is ideal for photo stimulation environments, as first used in the literature (McNamara et al, 2014)

It is based on the principle that the dopaminergic neurons are activated during exploration and navigation. Dopaminergic neurons play an important role in recalling the memory when the subject is asleep or resting by strengthening the spatial map created by the hippocampus.

The place cells in the hippocampus fire when the subject enters a new location constituting a spatial or cerebral map. Spatial and navigational learning helps to memorize places and navigate through roads.

However, the map created by the place cells may be temporary and labile and requires auto-backup from surrounding parts of the brain. With the help of neuronal input, the memory is consolidated and made permanent. Dupret, O’Neill, Pleydell-Bouverie, and Csicsvari (2010) have shown that the dopaminergic neurons of the hippocampus are responsible for spatial memory consolidation and stabilization. If the dopaminergic neurons are blocked during exploration and navigation, spatial learning and memory are impaired, and spatial maps remain unstable. (Bethus, Tse, & Morris, 2010)

The crossword maze is black in color and consists of a total of four start-boxes and eight open tracks. Together, they form 14 intersections.

The maze is suspended 5cm above the table and has support on the lower end. It comes with cue cards and objects for the animal to explore.

The subjects first receive surgical implantation of viral vectors in the dopaminergic neurons under general anesthesia. This will generate and record the expression of dopaminergic input.

A period of four weeks is given for recovery and virus expression in the neurons.

The litter-mates are housed together in a dedicated house with a 12-12 hour light/dark cycle with ad libitum supply of food and water.

Each animal is placed in the maze and allowed spontaneous exploration and familiarity with the apparatus for 1-2 hours a day for at least one week.

At this stage, each animal gradually receives surgical placement of tetrodes in the midbrain over a span of days. This will maximize the cell yield and number of recording days per animal.

Prior to the procedure and recording, hippocampal tetrodes are introduced in the brain. The tetrodes record the firing pattern of place cells in the hippocampus.

A one-hour rest period is given to the animal after the insertion of tetrodes. In the Pre-learning step, the subject is allowed to explore the maze with the start-boxes closed and in the absence of barriers for approximately 20 minutes. Then given rest for one hour.

In the Learning phase, the maze is configured in a way that there are two start-boxes with only one path from each leading to the reward location. As many as seven barriers can be introduced in the maze for distraction. The subject is given up to 20 trials to reach the reward. The learning phase is followed by a rest of one hour.

The Probe phase involves putting the subject back in the maze and releasing through the start-box. The maze configurations remain the same except that there is no reward this time. The subject is allowed to explore the maze for three minutes.

This step is repeated three times so that each animal gets a total of 12 minutes open-field exploration time. This will help calculate spatial rate maps more accurately.

All implanted animals are photostimulated with a solid-state laser every 20 seconds with the beam targeting the head to maintain neuronal output intensity. The laser remains off during intervals.

Evaluation of Memory Formation and Preservation

Crossword Maze is a remarkable tool for a deeper understanding of memory formation and stabilization in the animals. The crossword environment permits and strengthens behavioral performance. It allows spontaneous exploration without demanding rigorous animal training.

Bethusa, Tsc, and Morris (2010) showed specifically that novel memory is formed when D1/D5 dopaminergic receptors leading to the hippocampus are activated. In the absence of dopaminergic activation, the memory remains transient.

Memory disorders, such as amnesia and dementia, occur as a result of neurological damage to the brain structures that store memories. Dopaminergic neurons of the midbrain and the hippocampus form a functional loop, the activation of which is the mainstay of memory formation and retention (Lisman, & Grace, 2005). Crossword maze can be used to study memory related emotional disorders since the entire maze is based on learning and memory of the reward system.

Colin et al. (2014) employed Crossword Maze to study the role of dopaminergic neurons in stabilizing the memory in eight male, adult mice. The mice were tasked to explore novel and familiar open field environments with and without dopaminergic photostimulation. Baseline comparison revealed an increase in the dopaminergic action potential in novel environments.

The analysis of sleep/rest session revealed that photostimulation enhanced memory recall without affecting exploratory behavior in the mice. In fact, it persevered and reactivated memory rather strongly in the novel environment.

The memory scores are then calculated by plotting graphs between:

The Crossword maze is a useful paradigm to study spatial navigation and memory in animals. It is typically like any crossword game with linear pathways and courses that the animal masters with practice, training and memory.

It is easy to maintain and clean. It can be washed with water or cleaned with a cotton swab dipped in 70% ethanol.

The maze is already configured and requires minimal handling and expertise. It has barriers that can be introduced and removed during different stages of the procedure with ease.

The maze does not tire the animal by stressing or over-engaging it. The trained animal reaches the target with the help of spatial memory in a matter of minutes. Even if it does not, it always reaches other cue objects and given a resting period before the next stage.

Since the maze recordings go on for days, the animal is given sufficient time for rest and sleep every day.

The variety of start-boxes, corridors, and intersections permit investigating various characters of memory. To ensure the memory remains intact, the maze can be randomly rotated to promote allocentric spatial learning and force the subject to look for new routes to reach the reward.

Training on Crossword maze is lengthy and requires days before the animal can be ready for the test procedure. Like any crossword game, the paradigm is more like a quiz that can confuse the animal.