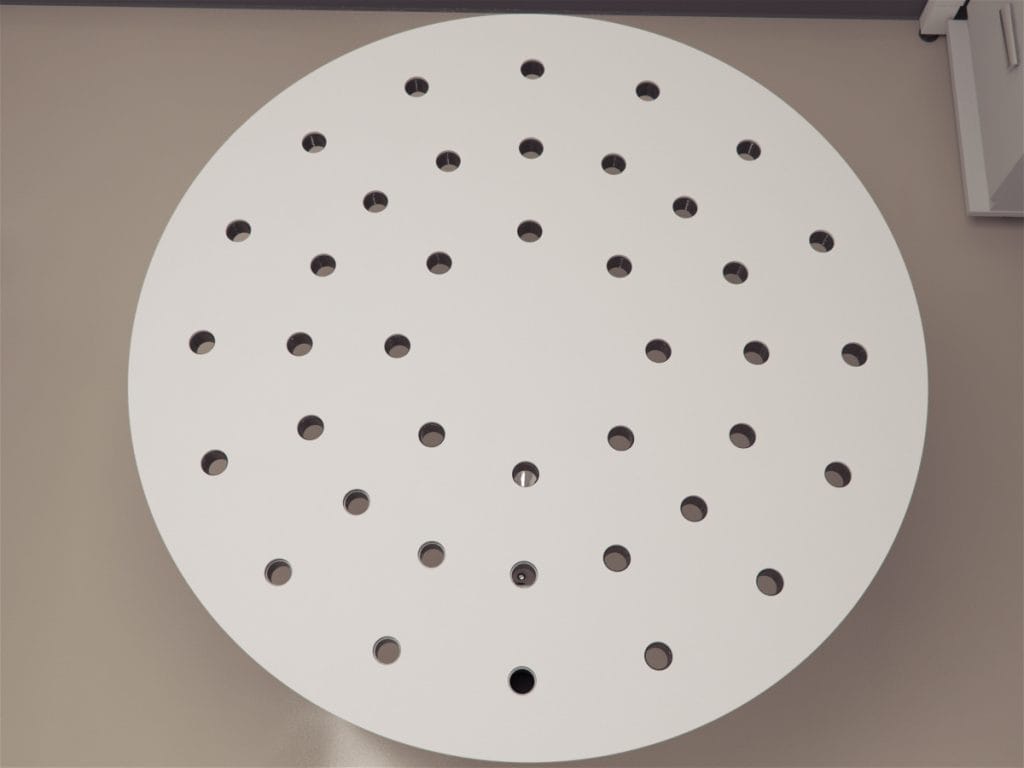 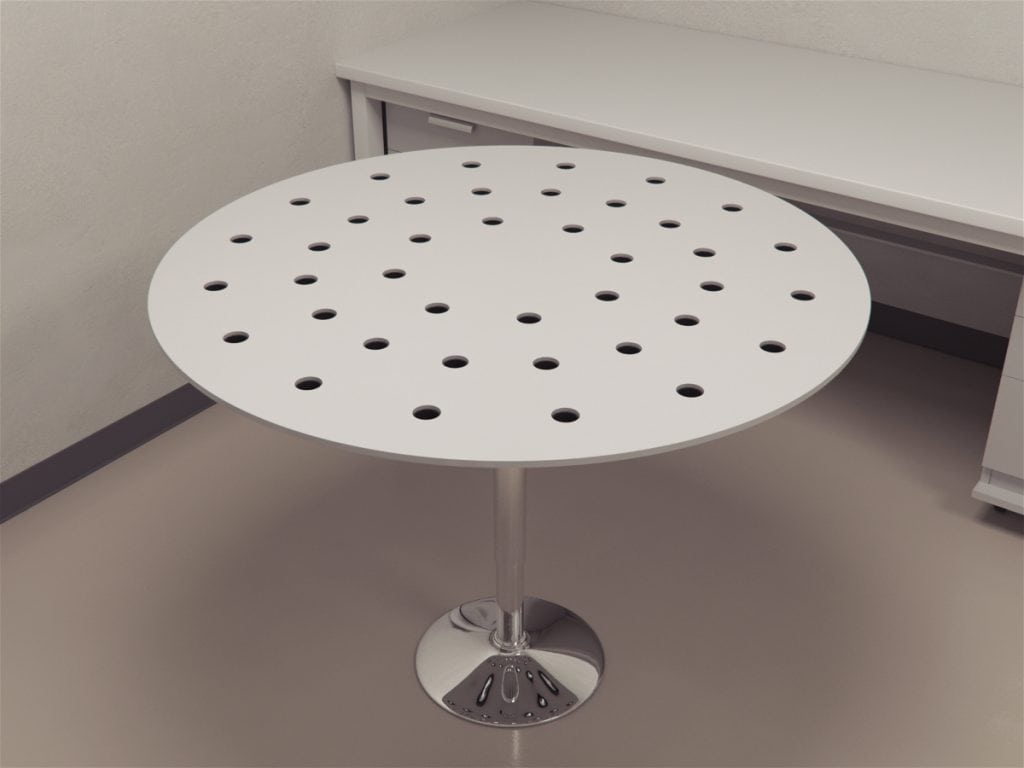 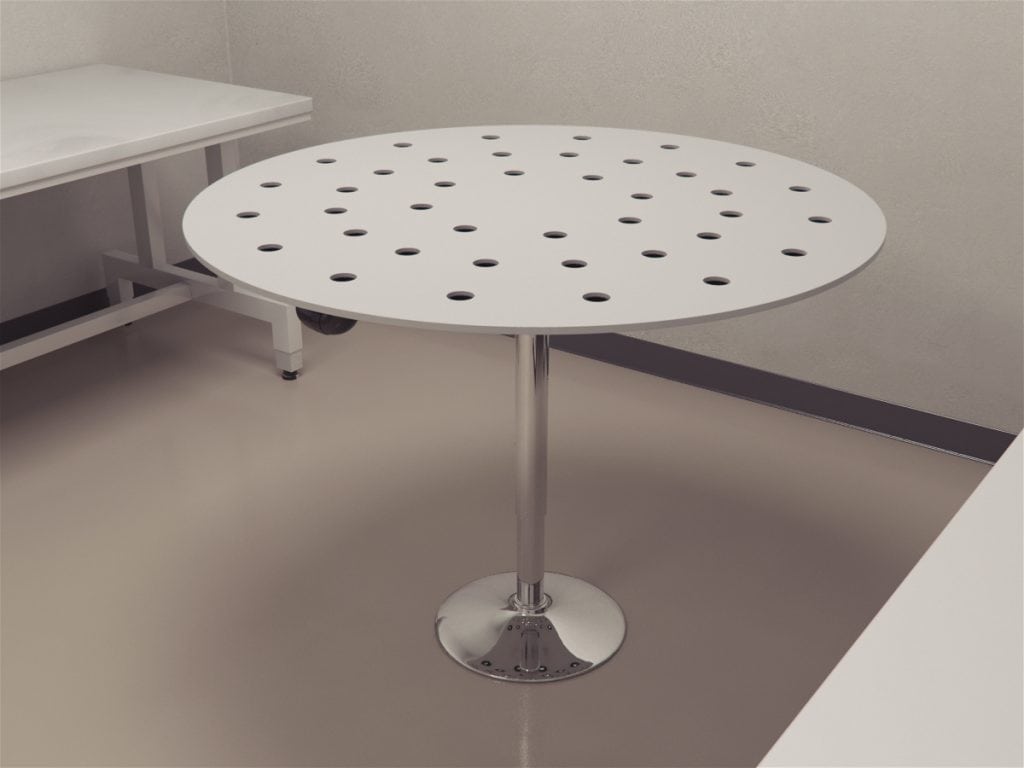 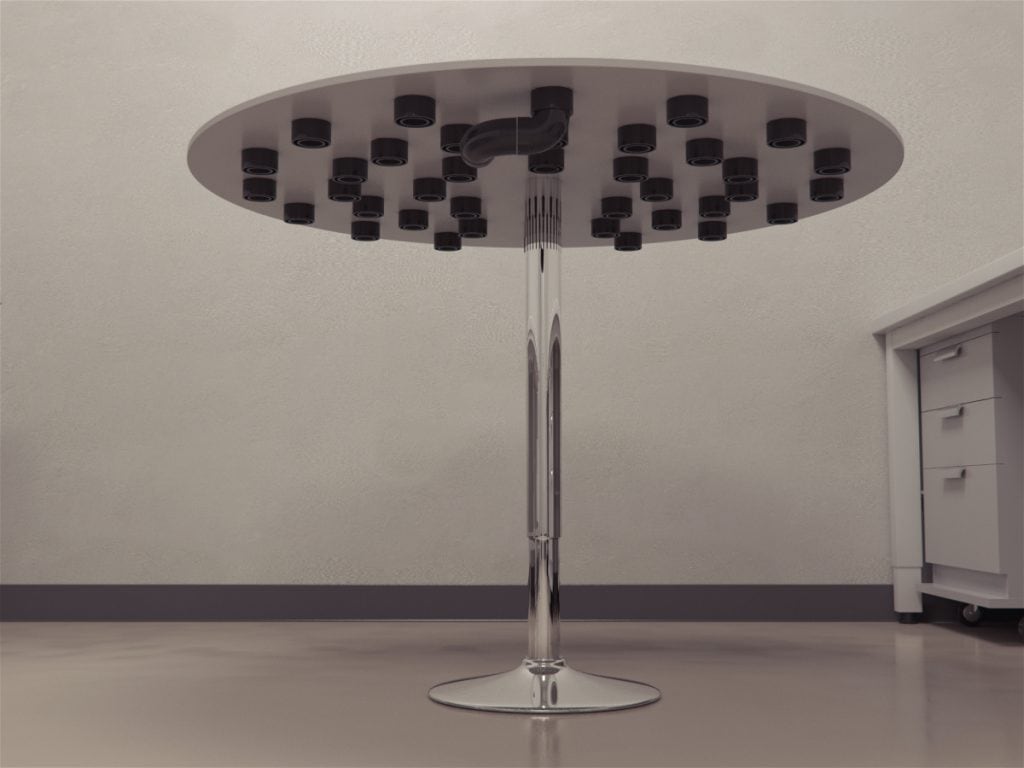 This modification of the Barnes maze was originally described in the literature as a  delayed-matching-to-place (DMP) dry maze test is a variant of DMP water maze by  Steele and Morris (Steele and Morris 1999) and refined by Faizi et al (2012).

The DMP protocol uses a well patterned Barnes Maze with 16 holes on the outer ring, 16 on the middle ring and 8 holes on the inner ring with distance of 50, 35 and 20 cm to the center of platform, respectively.

In 1999, Steele and Morris published a paper outlining the delayed-matching-to-place (DMP) water-maze task. They suggested that the DMP water-maze dissociates components of spatial navigation and hippocampal NMDA receptors in memory by frequently updating the escape platform. They were able to conclude that the DMP task was hippocampal-dependent and the event of escaping was NMDA receptor sensitive. The capability of the water-maze DMP to assess spatial working and episodic-like learning and memory was polished by Faizi et al., 2012 in their dry-maze DMP.

The DMP maze is a Patterned Barnes Maze (PBM) that has the escape platform frequently changed during trials. The apparatus includes an elevated circular platform having 40 holes arranged across the inner, the middle and the outer rings. Each of these holes is attached to an ABS tube. Only one tube acts as an escape tube.

The subjects are briefly handled for 5 days by the experimenter 1 week before the task and are placed in darkened home cages for at least one hour before the experiment. Each subject is habituated to the escape tube for 2 minutes before the first trial is initiated.

Before beginning the experiment, the apparatus including the ABS pipes and escape tube is cleaned thoroughly to avoid any stimuli from interfering with the performance of the subject on the PBM. The high overhead lighting at 1200 lux and tone noise of 2 KHz, 85 dB can be used to create aversive motivation for the subjects. Visual cues (if any) are placed on the sides of the maze. The session can be monitored and recorded using an automatic tracking and video software such as the Noldus Ethovision XT.

For the trials conducted over the days 2 to 4, the escape tube’s location is changed for each test day, and the trials are repeated as mentioned earlier.

Young (3 months) and old (18 months) mice are observed on the PBM after receiving closed head injury. Both the young and old mice showed similar performances on the maze for days 1 and 2. However, the performance of the old mice deteriorated with each trial on days 3 and 4. In comparison, the sham group showed progress in their learning ability while the performance of the closed head injury group indicated working memory deficit (Feng et al., 2017).

Young adult C57BL/6J mice treated with three fractions of 3.3 Gy whole-brain irradiation were maintained on a diet supplemented with PLX5622 and tested on the PBM (Feng et al., 2016).

Evaluation of scopolamine on the performance of mice on the PBM

C57BL/6j mice are divided into two groups; one treated with saline, other with scopolamine (1 mg/kg ip), and tested for their performance on the PBM (Faizi et al., 2012).

Evaluation of Thy1-hAPP(Lond/Swe+) mouse performance on the PBM

The data that can be recorded are as follows

Graphs allow easy visualization and comparison of performances between different groups of the subjects.

The above graph shows the difference in average escape latency between mice treated with scopolamine and control groups.

The above graph compares the performances of young and old mice on test day-1 and test day-4.

The task is an adaptation of the water-maze DMP into a dry maze task. Thus it eliminates the need for immersion of the subject into the water. The PBM allows assessment of spatial working and episodic-like learning and memory by frequently changing the position of the escape tube for each trial. The task does not require food deprivation as seen in other behavioral tasks. In contrast to the traditional Barnes Maze, the positioning of the holes in the 3 rings limits the subject from taking advantage of serial strategy, thus motivating it to use spatial strategies and utilize the extra-maze visual cues. Another variation of the classic Barnes maze, the Randomized Barnes Maze can also be used for the same purpose.

Overtraining and handling procedures may affect reinforcing properties during the task. Ageing and single housing may also impact learning and emotion of the subject and thus impact test results. The subjects own behavioral flexibility can also influence the results. Maintenance of the housing under suitable conditions is also very important. The home cages should be protected from light as pre-exposure to the light may weaken the subject’s response.