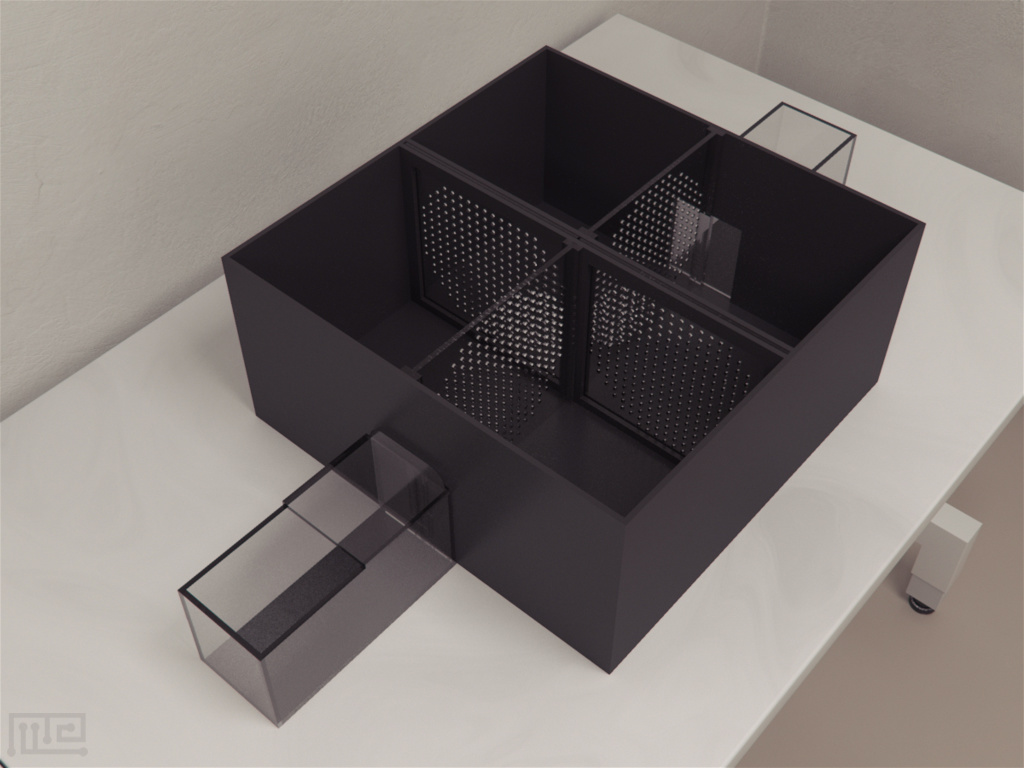 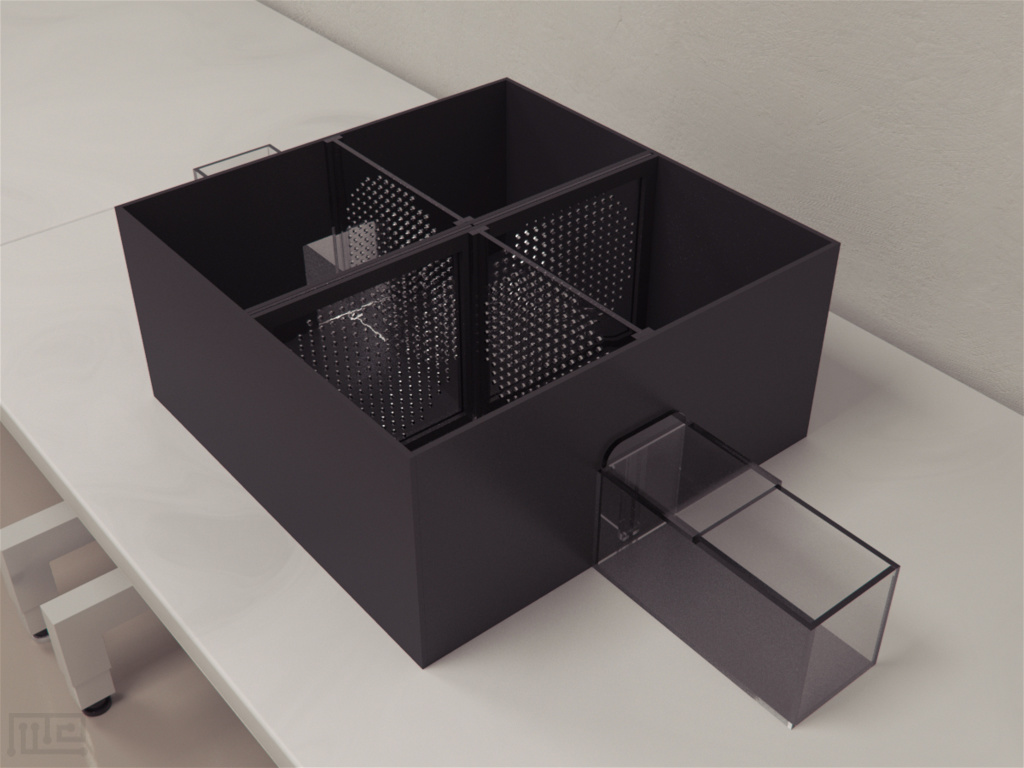 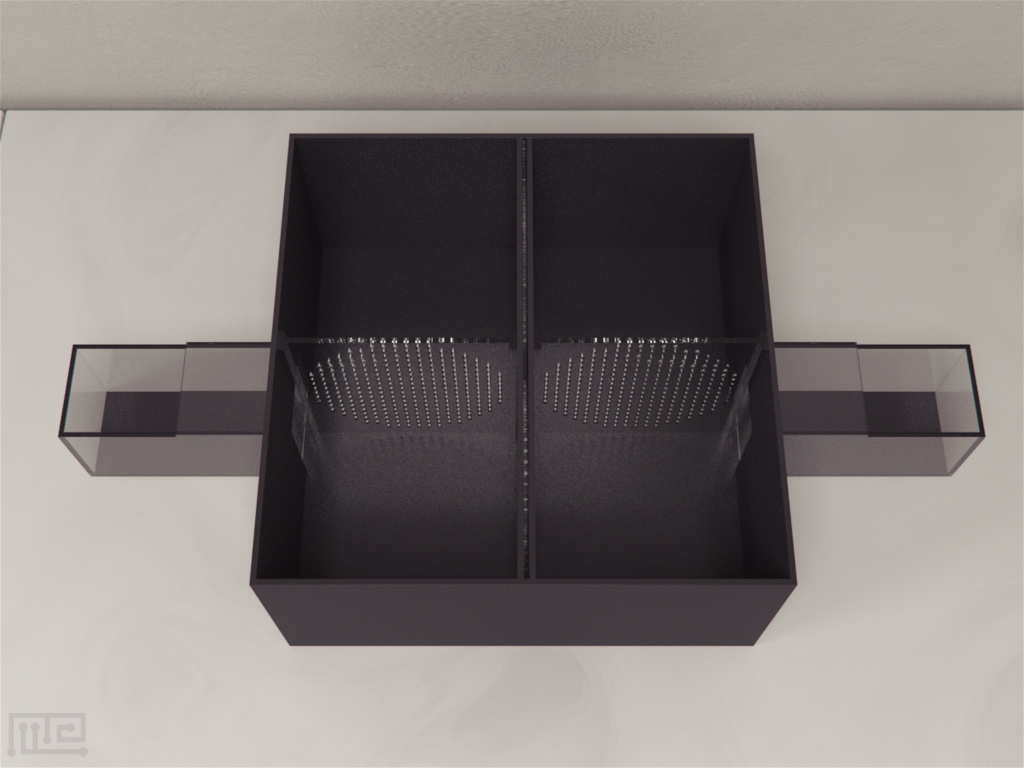 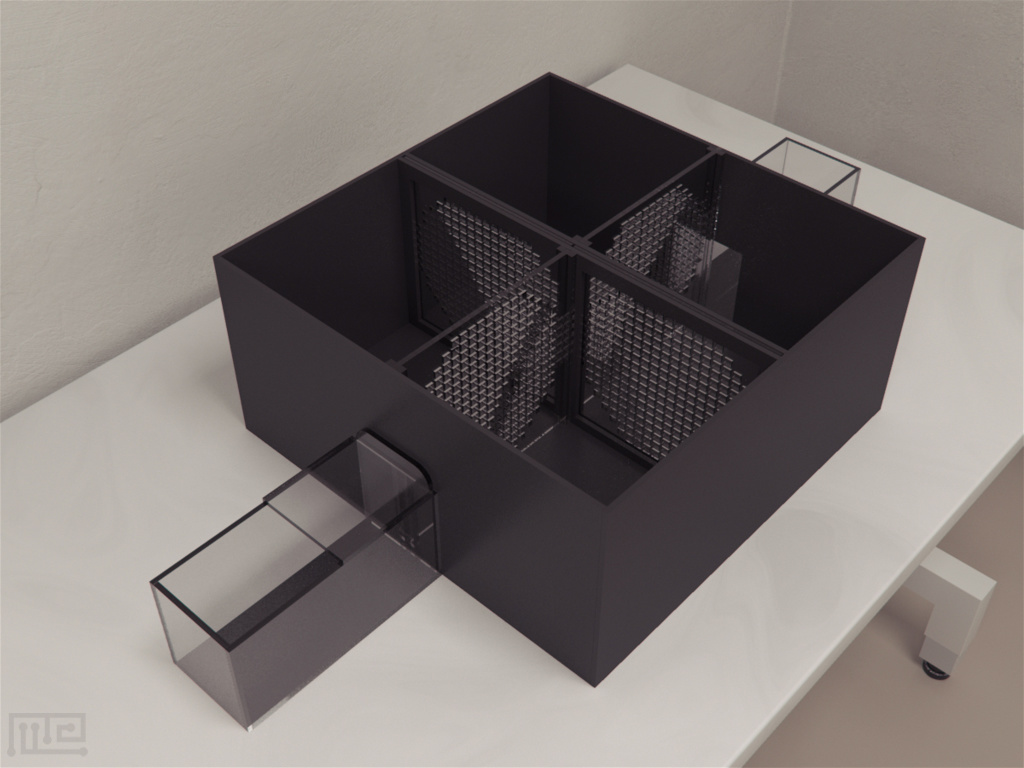 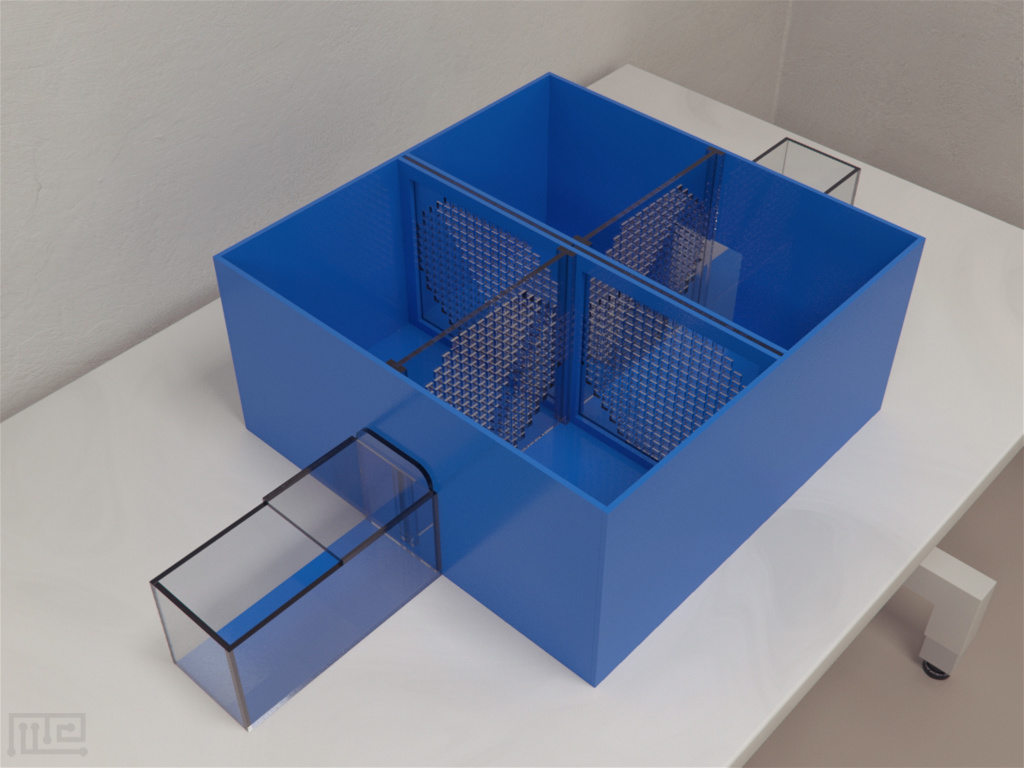 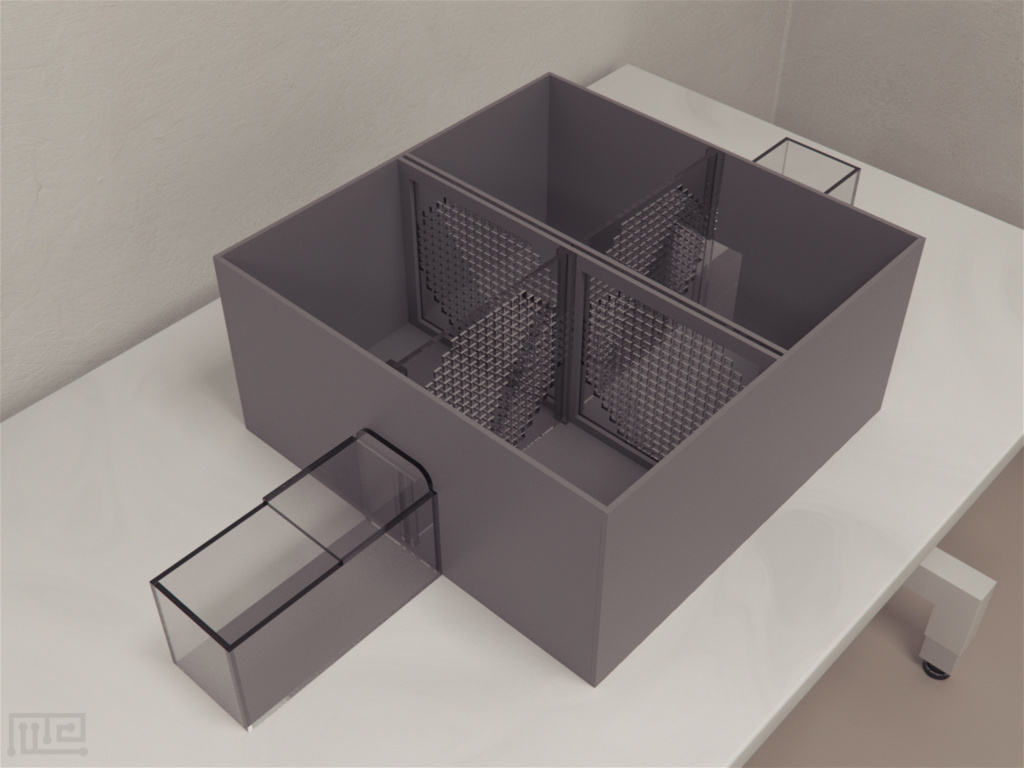 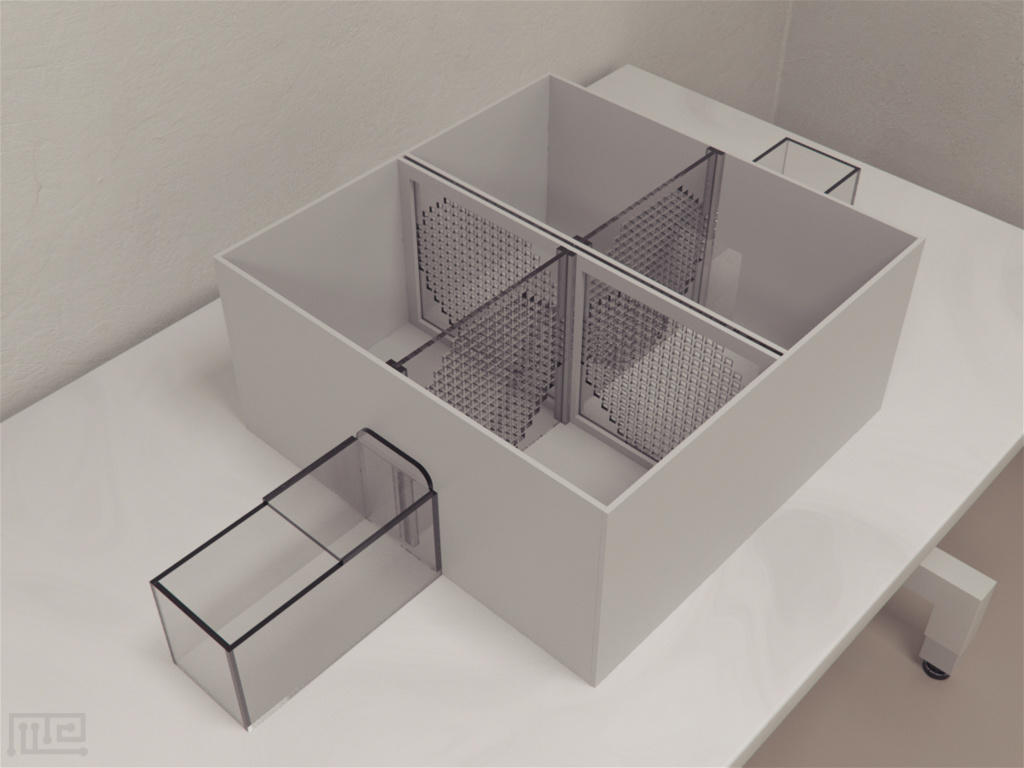 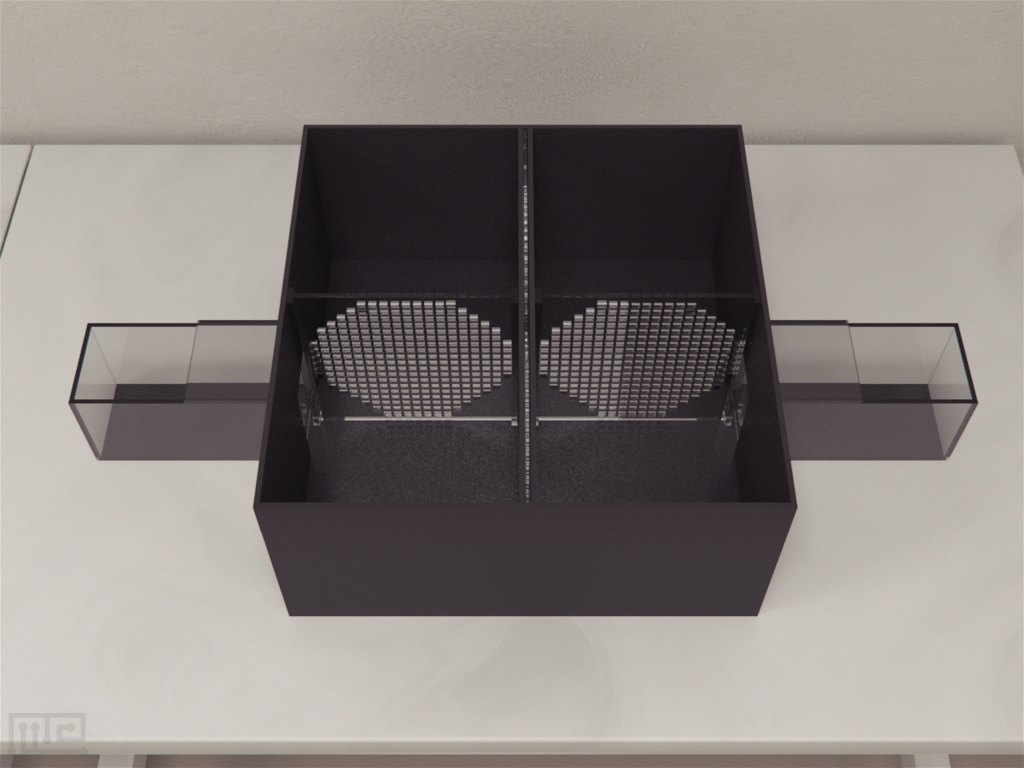 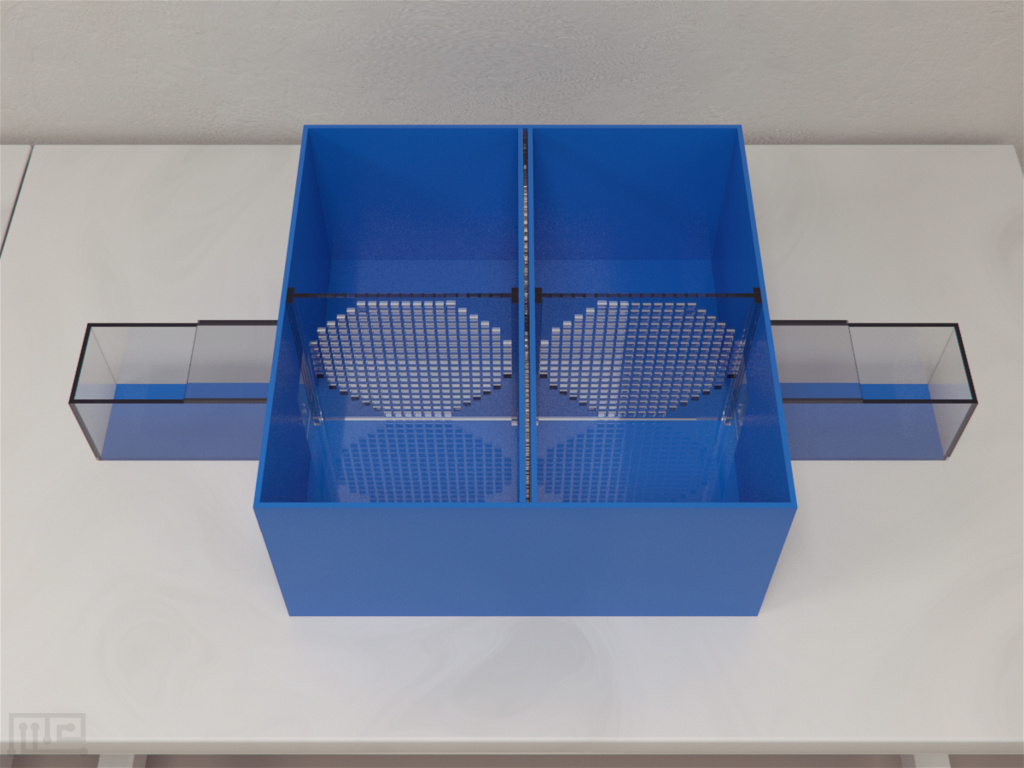 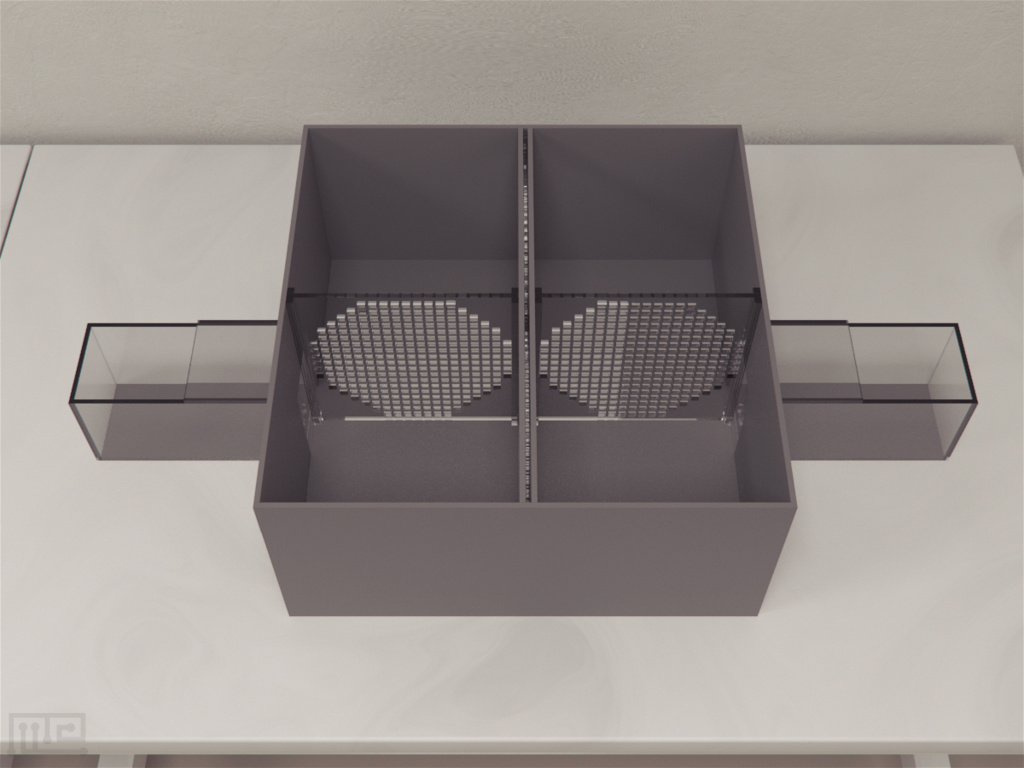 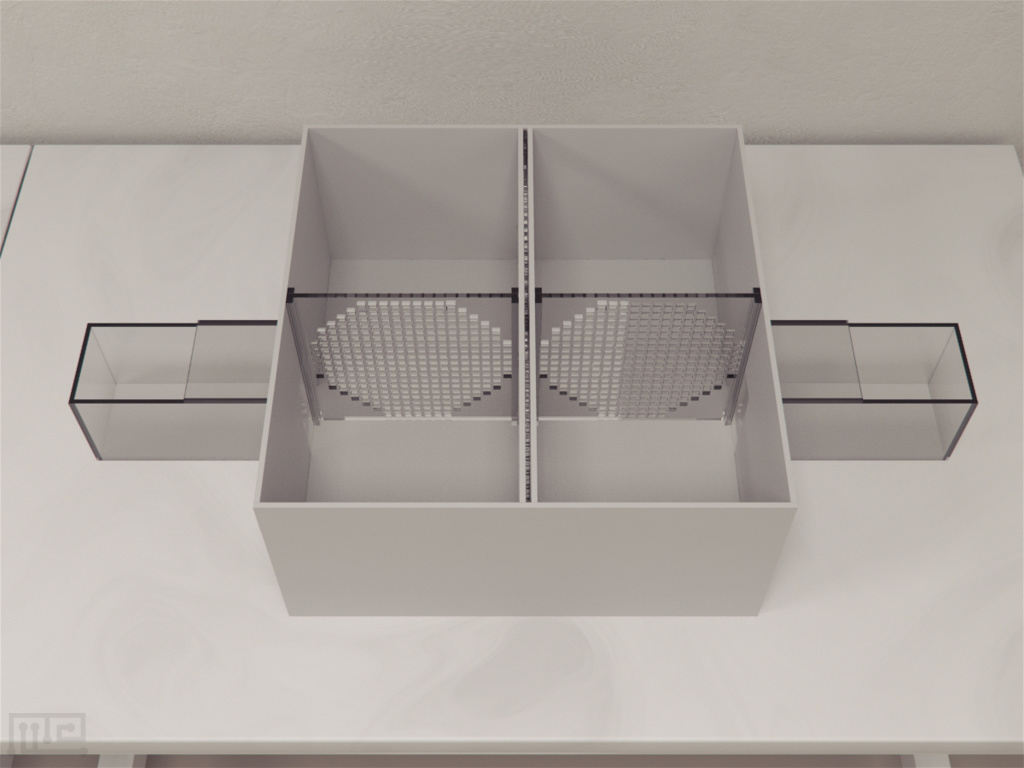 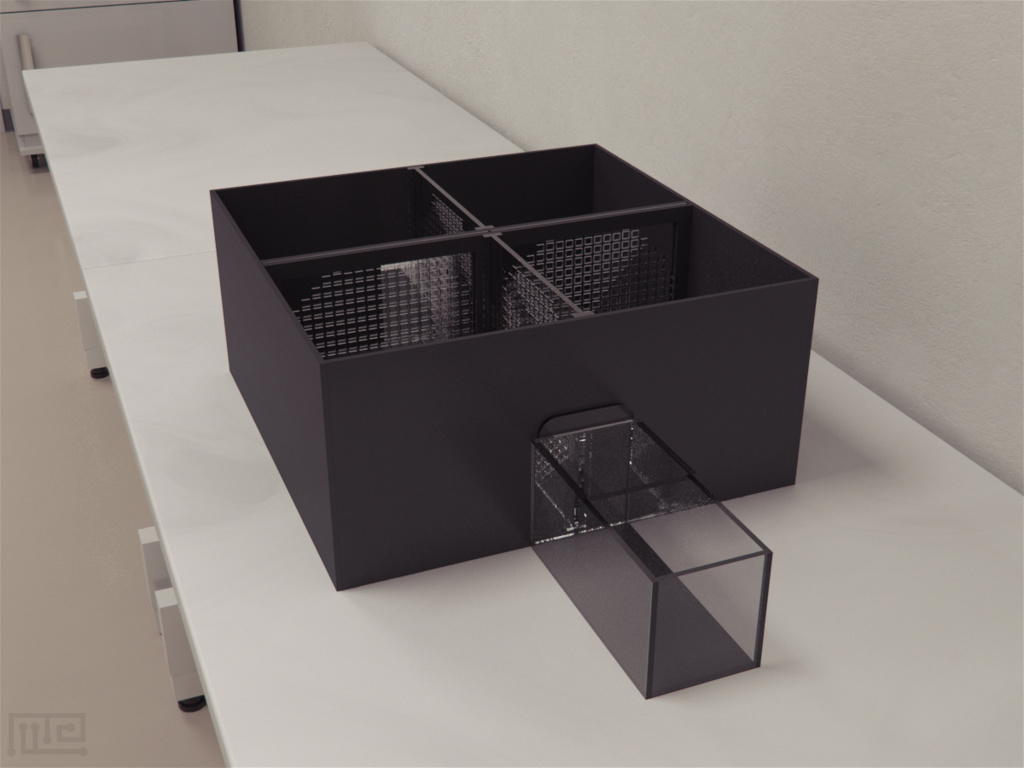 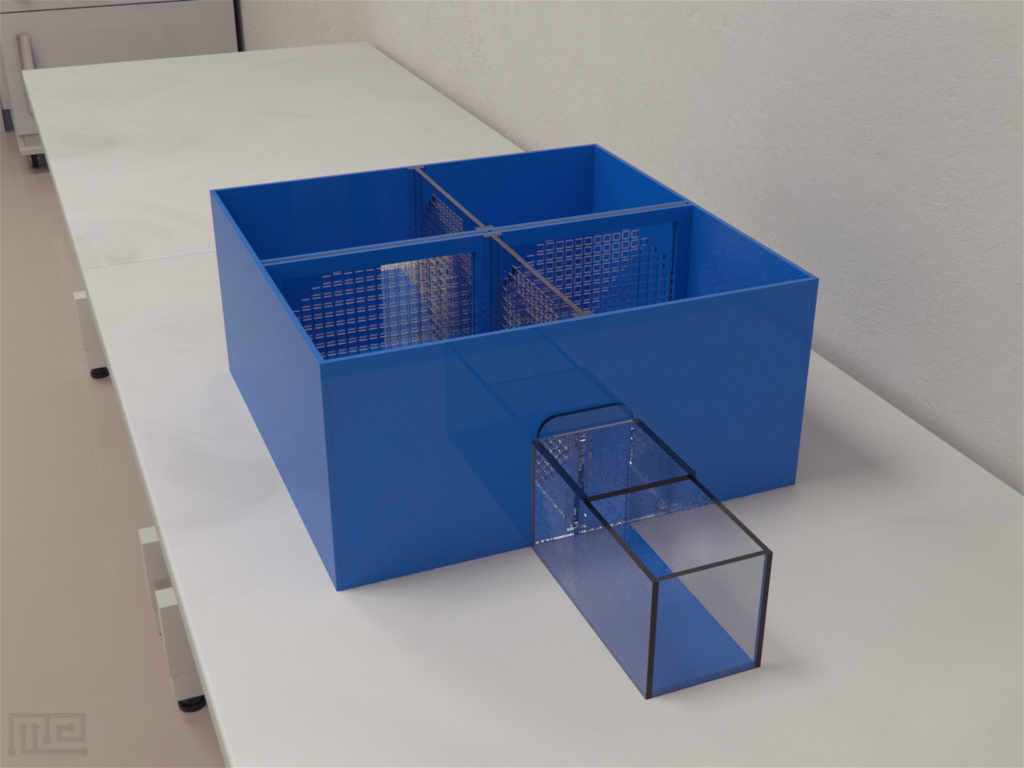 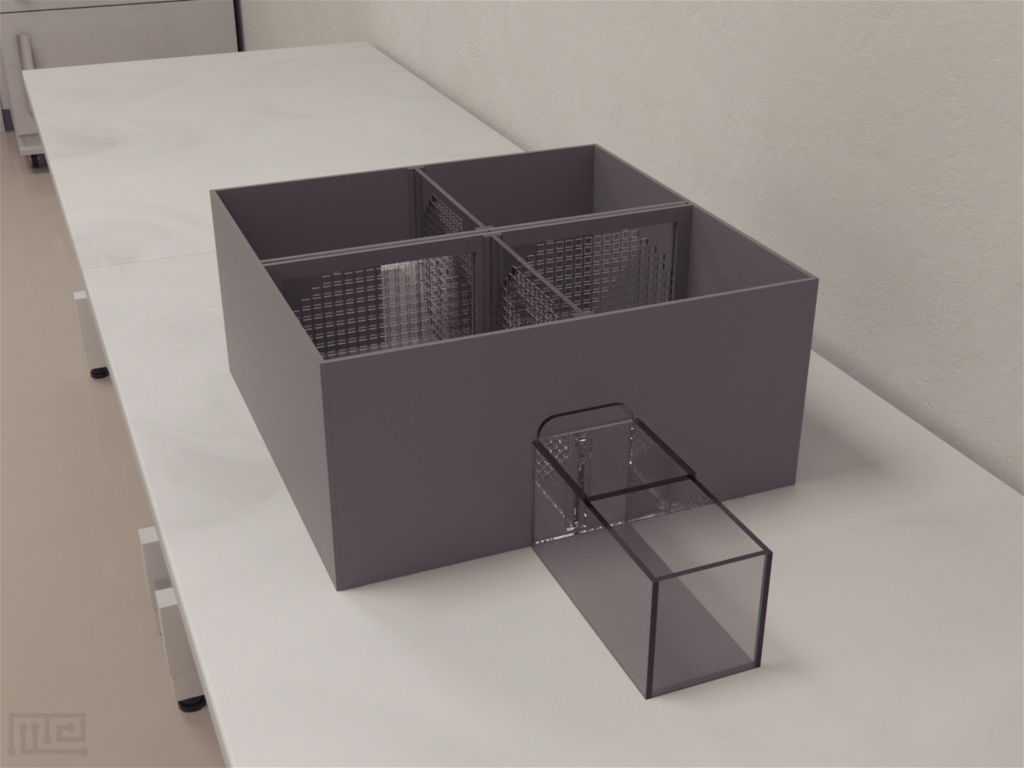 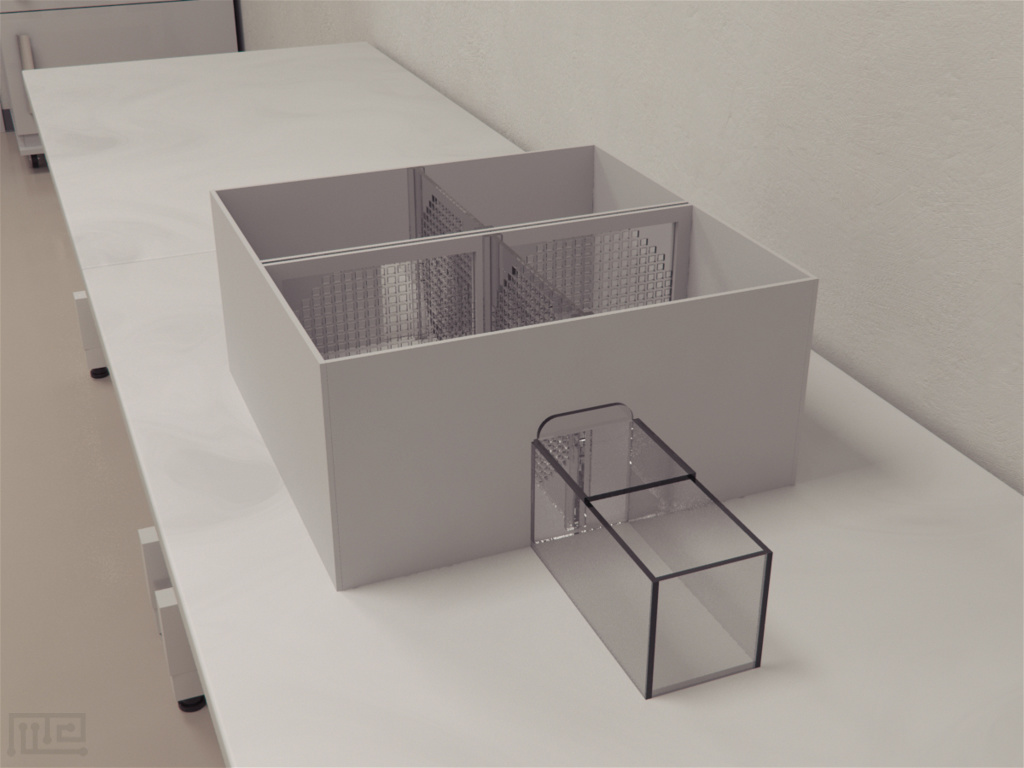 The double T maze apparatus consists of two T mazes with a start box. Through a sliding door, two compartments of each T maze are separated by a movable portioning wall. The partition wall between compartments are transparent and perforated, so rodents can smell and visualize cues. Custom sizing and coloration available.

Double T-Maze is a behavioral paradigm to test the cognitive abilities of rodents to manipulate the strategy of the opponent. It is the mouse model of prisoner’s dilemma. Prisoner’s dilemma (PD) is a type of game theory that shows why two individuals are not likely to cooperate in a given situation even when it is in their best interest. This characteristic is specific to humans, and only humans have evolved the cognitive abilities of numerical discrimination involved in PD games such as Tit-for-Tat.

Double T-Maze is based on the principle that rodents possess the intellect to comprehend the payoff matrix of the PD game and the strategy of the opponent. In the context of a PD, rats have the tendency to develop cognitive abilities for reciprocity-based cooperation. Earlier, this finding has been noticed in cats. Rutte and Taborsky (2007) found that cats possess the ability to display generalized reciprocity. This remarkable finding led Duarte, Isabel, Élio, and Marta (2010) to develop Double T-maze to revisit the interactions between rats during a PD game.

The paradigm consists of two T-mazes with two start boxes and compartments each. A transparent perforated partition allows visual and olfactory exchange between animals. A stooge rat is placed in one of the compartments, and the target animal is allowed to enter the paradigm and make a choice. The animals can either cooperate or defect. Choice behaviors are rewarded or punished.

The apparatus consists of a fusion of two identical but opposite plexiglass T-mazes (dimensions 18-27cm x 35-52 cm x 8-12.5 cm). Each T-maze consists of a small start box (length: 17-25cm, width 7-10.5cm) that gives access to two compartments via a sliding door. A movable partitioning wall (height: 8-12.5cm) separates two compartments of each T-maze. The portioning and the adjacent walls of two mazes are perforated and transparent to allow view and odor exchange between animals. The outer wall of both mazes is black.

House animals in pairs in T-maze under 12h light/dark cycle. Provide free access to food and water except for animals that are to be used for experiments involving food-deprivation. Maintain the weight of such animals to 85% of their ad libitum weight by restricting access to food.

Continue habituation (5 min/day) for about a week (3 days without a stooge, 5 days with a stooge). All experiments are conducted in daylight.

This test determines whether rats can differentiate between temptation and rewards, and between punishment and sucker outcomes. Here PD game matrix T>R>P>S (T: temptation, R: reward, P: punishment, S: sucker) is used. This payoff matrix is based on the rule that if both participants cooperate, they receive a higher payoff (reward, R), punishment (P) if they don’t and defect, but if one cooperates and the other defects, the defector receives the highest payoff (temptation, T) and the cooperating animal receives lowest (sucker, S). Reward and temptation trials lead to the delivery of food pellets, and punishment and sucker trials lead to tail pinches with forceps.

Place rats in the start box and allow free entry into either of the compartments. Deliver 6 pellets in one compartment and 4 in the other. Carry out 20 trials over 5 days and notice a preference for the 6-pellet compartment.

Repeat the same experiment but with negative reinforcement, i.e., deliver one tail pinch in one compartment and 3 pinches in the other. Score the preference for 1-tail pinch compartment. Again, conduct the same number of trials over 5 days.

Assessment of Cognitive Abilities of Rodents to Engage in Reciprocity

Duarte et al. (2010) recruited male non-litter mates and conducted iPD positive and negative reinforcement games for 10 consecutive days. They defined two compartments of each T-maze as cooperation (C) or defection (D). For every experimental repeat, the compartments were switched to prevent odor trail from the last experiment to affect the response of the next target rat.

For each game, one rat, termed the stooge, served as the fixed strategy while the other could freely choose C or D. The target rat was placed in the start box and allowed to choose C or D on its accord. The target rat could see the stooge placement through the perforated partition wall and use it as a cue to guide its choice. Once the target rat made the decision, the experimenter closed the partition and delivered reinforcement (R, P, T, S). The rat was removed and replaced by a new one.

The experimenters found that in the Positive Reinforcement Test, preference for 6-pellets compartment increased over 5 days and reached 84±2% by the last day, and for the Negative Reinforcement Test, preference for 1-tail pinch compartment emerged in the second half of the test and remained steady at 60%. The results showed that rats possessed the ability to discriminate 6 over 4 pellets and 1 over 3 tail pinches. After a defective move, the rats were more likely to cooperate. However, the degree of cooperation remained the same after a cooperative move. The experimenters concluded that the frequency of mutual cooperation is much higher in rats than mutual defection.

Following choices are measured in the double T-maze payoff matrix:

Double T-maze is the first of its kind tool to study iPD game theories in rats. Reciprocity, such as numerical discrimination, control of temporal discounting, and memory, has hitherto been considered a human aspect. In animals, the reciprocity studies have mainly resulted in defection. Double T-maze, owing to its simplicity and clever execution, provides a unique technique to assess cognitive abilities required to encourage cooperation in rats.

The maze is suitable to model two PD games, Tit-for-Tat and pseudo-random, with different strategies to evaluate the adopted behavior of rats. The paradigm serves as a model to simulate other game strategies to get a deeper and better understanding of rat’s cognitive capabilities.

The maze design is simple, and the compartments are wide enough to house two rodents simultaneously. The perforated partition allows a complete view of the stooge and the target rat to help make the cooperation or defection decision.

The maze requires repeated cleaning after every trial to remove odor cues from the last trial. The cues can affect the decision of the trial and affect score calculation. The number of training trials exceeds 40, which makes repetitive cleaning a hectic job.

Food deprivation affects the performance and motivational state of the rats. When the rats were partially food-deprived in the experiment, the levels of motivation and cooperation fell.

Double T-maze uses sequential game choices, rather than random. The animal behavior is measured in standard settings and thus remains unpredictable in other choice games. Further study is needed to address factors that can affect reciprocity specifically.