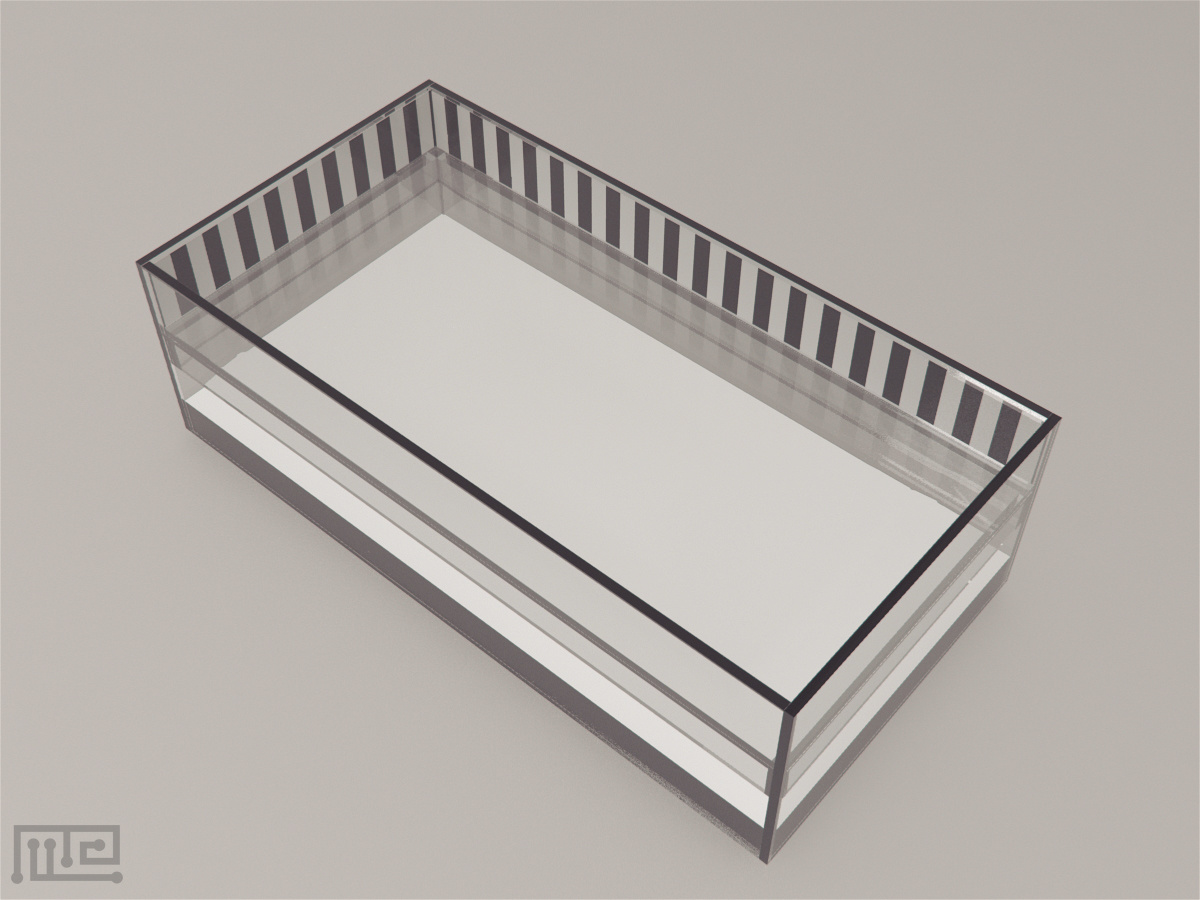 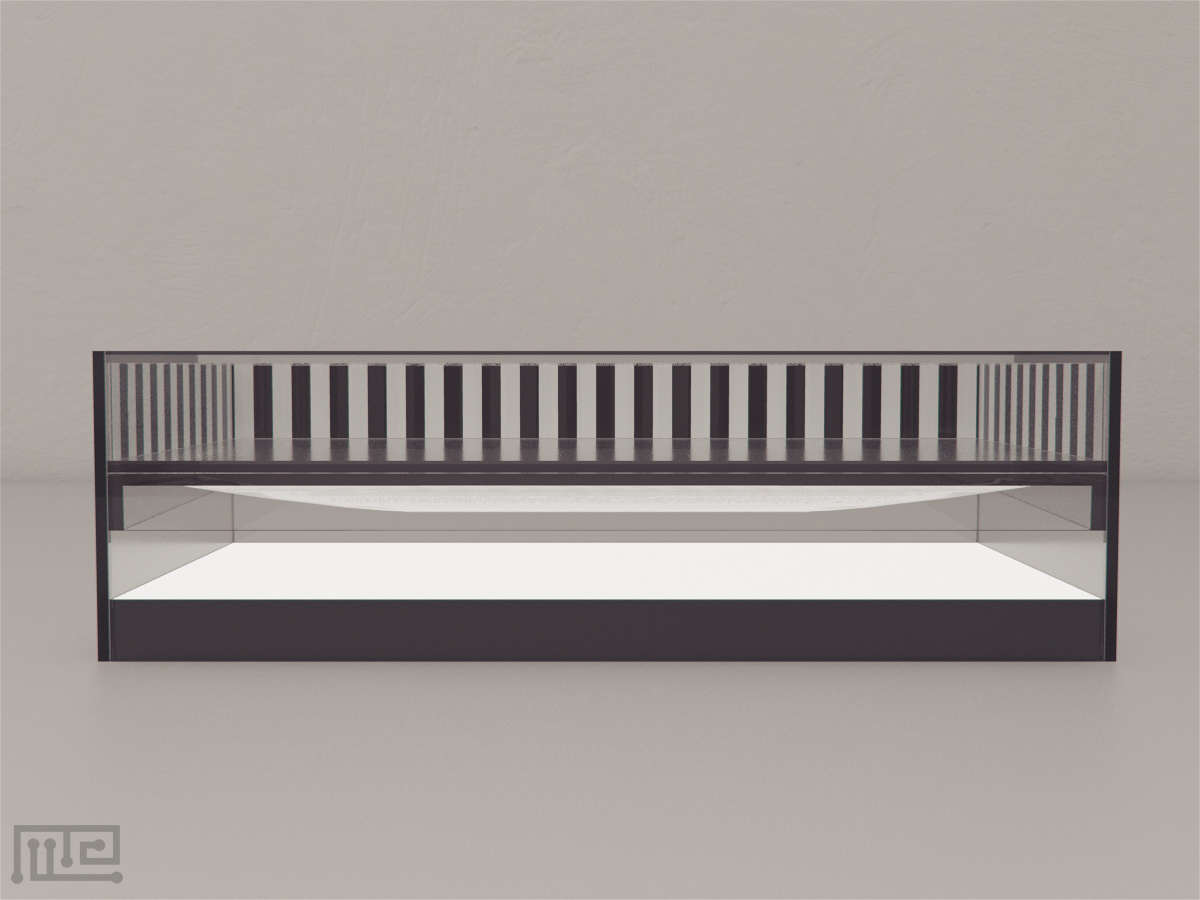 The shallow drosophila chamber was first described by Simon et al (2010) as an innovative design to restrict flies to a shallow volume of space, forcing all behavioral interactions to take place within a monolayer of individuals.

The design minimizes the frequency that flies occlude or obscure each other, and promotes a greater number of flies to move throughout the center of the chamber, thereby increasing the frequency of their interaction and improves the quality of data collected by digital video

Drosophila Shallow Chamber (DSC) is used for studying the locomotor behavior of single Drosophila melanogaster flies, interactions between pairs of flies, or the complex social interaction of individual flies behaving within large groups. Drosophila studies over the years have given valuable insights into molecular mechanisms controlling behavior and development. Drosophila melanogaster and many vertebrates including humans have a lot of internal organ systems that are functionally analogous but differ in gross morphology and cellular features. In the past, due to these morphological differences, invertebrate animal organs were not commonly used for studying pathological disease mechanisms. With the development of technology used for mapping genomes, it has been found that approximately 65% of human disease-causing genes have a functional homolog in flies which are expressed to produce proteins with similar functions to that shown in humans. This information has been used to discover molecular mechanisms underlying mutations in the human genome that produce disease phenotypes. This is especially important for studies related to nervous system. Drosophila is smaller in size with a less complex nervous system as compared to many vertebrates, so it used as a model for studying different neurological diseases like neurodegeneration, epilepsy, dementia, stroke, traumatic brain injury and brain tumors. Such studies can provide novel insights into pathogenic mechanisms and help in devising new therapeutic strategies for different neurological diseases (Ugur et al., 2016).

There are a lot of genetic tools available to study the relationship between genes, neurons, and behavior in flies, but there is a lag in the development of similar tools for quantifying behavior, causing a slowdown of progress in the further understanding of such relationships. Drosophila behavior is commonly studied by digitally recording the experiments using machine vision methodologies that automatically track and measure the behavioral phenotypes of flies. The working of such methodologies highly depends upon the raw data recorded from the experimental chambers. Conventional experimental chambers with vertical walls used for studying Drosophila cause problems with measurement and analysis of behavior due to its design features.  Vertical walls in a chamber possess many problems. For example, it allows the flies to walk up along the walls and onto the ceiling, this can lead to flies overlapping and blocking each other causing difficulties with recording their behaviors individually. This can also lead to changes in the appearance of flies as they move along different surfaces of the chamber obscuring important identifiable features like the position of fly’s wings or limbs important for analyzing certain behaviors. Conventional chamber with a high ceiling allow plenty of room to the flies for flight and also provide plenty of space to flies to cluster in the cracks or corners in the periphery of the chamber which create problems for tracking using a single digital camera. To overcome these issues elaborate designs were created using thermal barriers and water moats (Simon et al., 2010). These designs also required clipping of wings to prevent flies from flying which can interfere with communication between flies during courtship or when showing aggression. Simon et al. developed a simple experimental chamber (DSC) with a low ceiling and sloping angled walls creating a small shallow space that forces the flies to form a monolayer of individuals preventing overlap or changes in their appearance. The chamber complements a variety of machine vision methodologies for measuring and analysis of behavior using an overhead viewing camera angle.

Drosophila shallow chamber is a general purpose experimental chamber with sloping walls rather than vertical walls with square corners. The sloping walls intersect with the paint coated glass ceiling and are continuous with the horizontal floor of the chamber. There are holes in the floor surface for introducing food and water for flies. The chamber is illuminated with fluorescent lights from the above and infrared LED lights from below. A camera is positioned above the chamber for recording behavior of flies.

DSC is designed with slight variations to the typical conventional chamber with vertical walls from floor to the ceiling. The chamber has a 3.5 mm high glass ceiling coated with silicone paint. The rest of the chamber is made up of transparent clear acrylic mounted on an aluminum base. The floor has 5 mm thickness. The walls of the chamber have two parts, a sigmoid sloping part starting from the ceiling making an angle of 11 degrees continuing with the second straight part, merging into the floor forming one continuous smooth surface. The diameter of the chamber will vary, with 7 cm for observing courtship behavior and 13 cm for observing the movement of single flies or groups. For uniform backlighting, the material is removed from the underside of the chamber following a similar curvature to the floor. Multiple holes are made in the floor which is fitted with removable plugs and can be used for food and water access. The chamber is surrounded by a cylinder with a lid made up of translucent checkered black and white paper. An array of fluorescent lights is used for backlighting along with standard fluorescent room lights from above the chamber along with a 12 X 12-inch array of 850 nm infrared LEDs mounted underneath the chamber. A single digital camera is mounted in the center above the chamber.

Drosophila melanogaster flies are housed in standard 250 mL bottles at 250C and 40% relative humidity supplied with standard food medium. Fly stocks are kept on 16 hour light to 8-hour dark cycle with immediate transitions between the light and dark photoperiod. Collect 50 flies from the culture bottles and house them in standard 10 mL Drosophila vials with food, a day before testing. On the morning of the test, place 25 males and 25 female flies together in a standard Drosophila vial with only agar, 7 hours before testing.  When testing for courtship behavior, isolate virgin flies, 7 hours after hatching from the pupal stage. Place male flies individually and 15 female flies together in a vial with standard food for 4-5 days before testing.

Clean the entire chamber with ethanol and let it dry for 15 minutes. Use a mouth pipette to transfer flies into the chamber. Immobilize the flies by cooling them down to 40C for sorting and counting. The tracking and recording of the trials can be performed using tracking and video system such as the Noldus EthoVision XT. For studies related to courtship behavior, place a pair of virgin male and female flies into 7 cm chamber and record their behavior for 20 minutes or until the onset of copulation. For studies related to the locomotion of flies, introduce either a single or a group of up to 50 flies in the chamber and record their behavior for 30 minutes to 1 hour.

Simon et al. developed DSC as a general purpose experimental chamber that complements automated machine vision methodologies for studying fruit flies behavior. They conducted a comparative study with the conventional chamber to highlight the design features of the DSC. The DSC restricts the flies to a shallow space causing a formation of a monolayer of individuals. Hence the flies do not overlap or block each other. This also decreases the variability in appearance and promotes more flies to move towards the center of the chamber which increases the number of interactions between them. Such chambers are a step towards catching up with the development of sophisticated tools for genetic manipulation. DSC provides better quality data for quantifying complex behavioral phenotypes of Drosophila which can be translated into human behavioral neuroscience studies.

Bussell et al. studied female sexual receptivity which requires the female to integrate external sensory inputs from the male flies as well as internal inputs from her own reproductive system to trigger multiple motor neuronal networks that may lead to copulation. In virgin female receptivity, pausing is considered as an important behavioral aspect which is controlled by a subpopulation of neurons identified using a genome-wide neuronal RNAi screen.  It was found that Abdominal-B (Abd-B) homeobox transcription factor is required during development of neurons for high levels of virgin female receptivity. Bussell et al. used DSC to observe courtship behavior between female flies with silenced or synthetic activation of adult Abd-B neurons and adult male flies. The results showed decreased receptivity in females with silenced Abd-B due to the decrease in pausing while females with synthetic activation of Abd-B neurons showed increased pausing. Drosophila courtship behavior is innate in nature. Hence Drosophila is a good model for studying neural networks involved in innate social behaviors found in a variety of species.

The tracking and recording of the flies can be performed using machine vision methodologies that use automated tracking and video system such as the Noldus EthoVision XT. The system can measure velocity, distance moved, time moving vs. not-moving, orientation, position, foraging behavior, circadian rhythmicity, courtship behavior, and thigmotaxis in Drosophila. The Noldus Observer XT can be used in conjunction for collection, analysis, and presentation of observational data.

The DSC has a shallow volume of space forcing all behavioral interactions to take place in monolayer. The design prevents overlapping or obscuring of flies by each other and lessens variability in appearance. The chamber prevents flies from gathering in corners or periphery by promoting more flies to move throughout the center which allows for greater interactions between the flies. The DSC does not require clipping off wings of flies to prevent them from flying and reducing the number of flies walking onto the ceiling. The chamber has a paint-coated ceiling that prevents the flies from walking and clinging over the ceiling as the surface is slippery, so the flies fall back down onto the floor. The chamber can be modified with regards to its diameter and height depending upon the experimental study.

The DSC cannot be used for studying flight in flies as the small volume of the chamber prevents flight. Multiple machine vision methodologies or tools may be required for different aspects of behavioral data analysis. Low ceiling chamber can prevent copulation and cause problems with studying courtship behaviors.