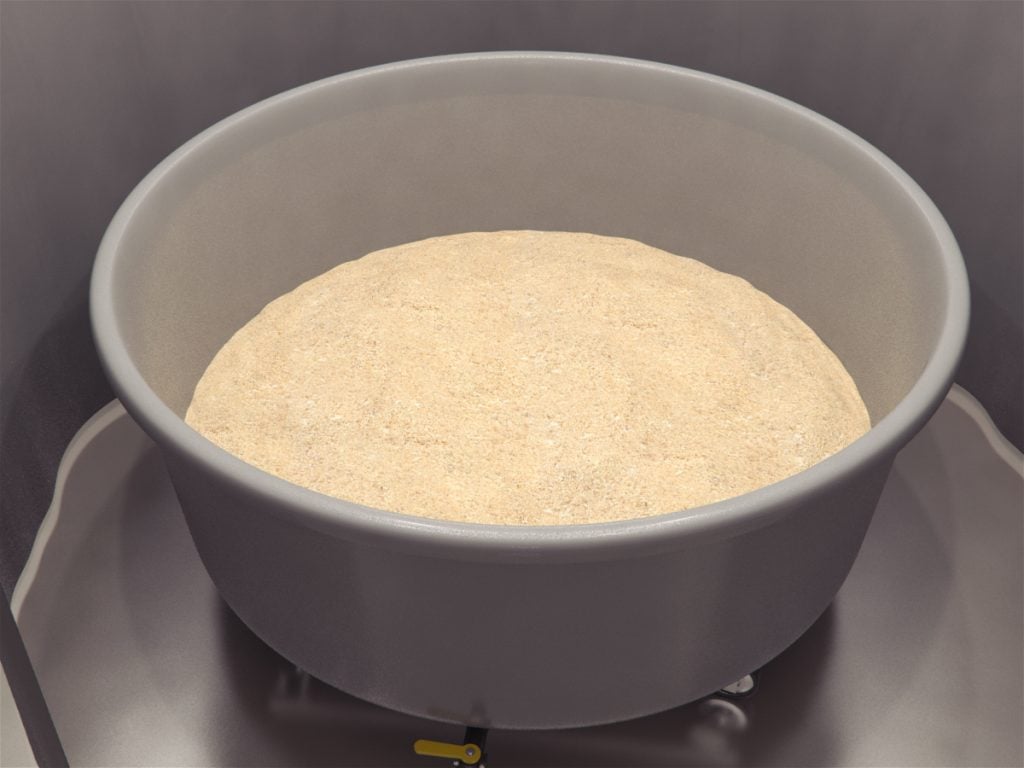 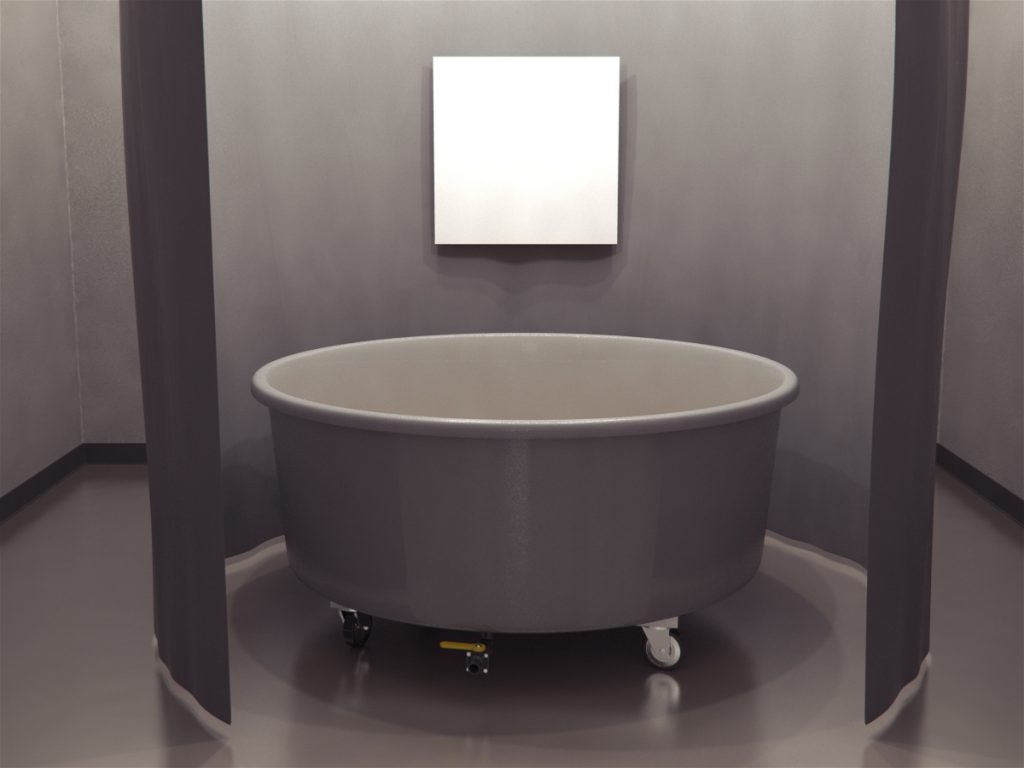 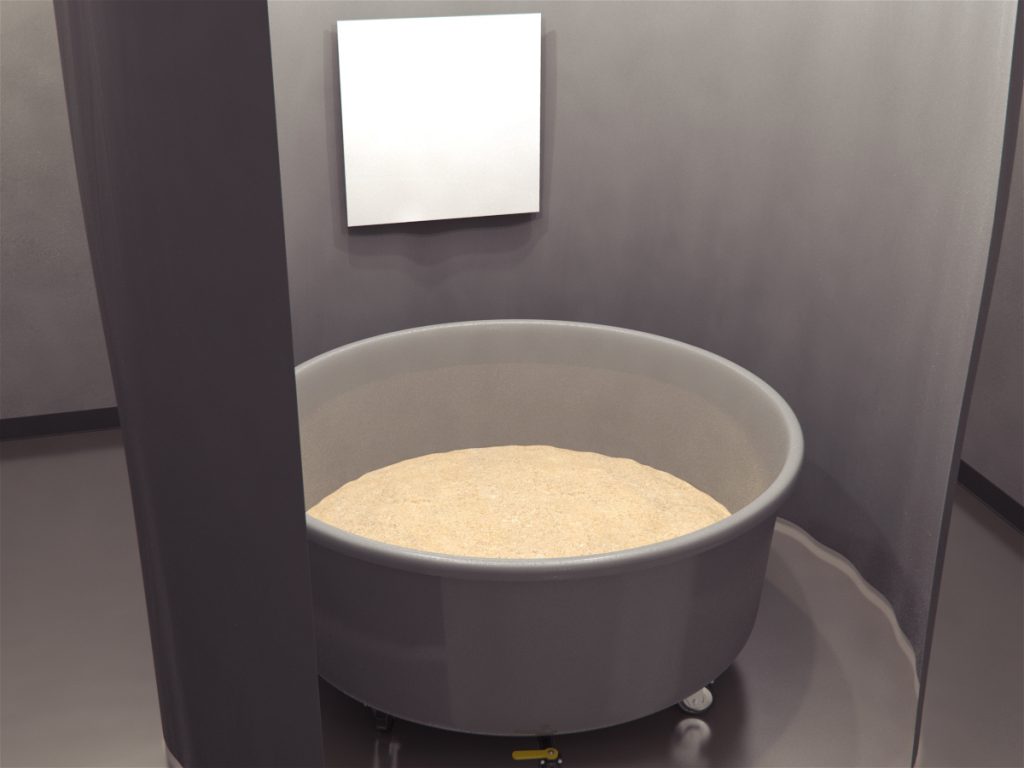 The Dry MWM is a food reward-based task. Subjects are placed in an open field that is covered with sawdust and are required to find the hidden food reward. The task can be aided by distal cues placed around the maze. Another dry adaptation of the Morris Water Maze is the Oasis Maze. Instead of a sand bed to hide the reward, as is the case with the food reward dry maze, the Oasis Maze has small hidden wells, scattered around the arena, holding water. Both these tasks use the same principle of spatial learning and memory. Other similar mazes include the Morris Water Maze and Barnes Maze.

The Dry Morris Water Maze consists of a 183 cm diameter cylinder of height 91.5 cm. The floor of the cylinder is covered up with 10 cm of sawdust that is usually mixed with the powdered form of the food reward. The mixing is done to prevent the influence of olfactory stimulus on the subject’s performance.

Another construction of the Dry Morris Water Maze makes use of square of sides 140 cm and having a height of 100 cm.

The Dry Morris Water Maze is cleaned before and after trials to minimize the influence of any external cues. The sawdust must be replaced for each session and blended with powdered food reward to limit subjects searching for the food reward based on olfactory cues.

Video tracking software, such as Noldus Ethovision XT, is set-up before beginning the sessions. Ensure optimal lighting and set-up visual cues, if any.

Pre-training is performed 4 trials per day for 7 days. For these trials, a dowel (13 cm height) and food combinations are used. Place the food in an open petri dish (3 cm diameter) next to the dowel on the surface of the sawdust. Release the subject from one of the 4 start points. Repeat the process by randomly changing the position of dowel + petri dish combination. For subsequent trials cover the petri dish with a close-fitting lid and seal with a piece of parafilm (maintain the sealing process for all subsequent trials). Push the petri dish deeper under the sawdust with each progressing trial. At the end of the pre-training week, if the subject performs successfully in two consecutive trials, perform catch trial wherein there is no food reward under the dowel. If the subject runs towards the dowel for the catch trial, pre-training is complete.

Spatial training includes 30 to 60 trials of duration 2 to 3 minute. During these trials, a fixed unmarked goal location for each subject is chosen and baited. These locations can be selected as the vertices of 2 octagons having the same center as the cylinder used; yielding 16 possible goal locations. The smaller octagon has vertices at the half length of the cylinder while the larger octagon has vertices at the three-quarter length of the radius.

Hold the subject in a holding box for 2-minutes before releasing it at one of the start points. If the subject is unable to find the reward and the maximum time has elapsed, raise the dish vertically above the sawdust and allow the subject to consume it once it approaches it. Maintain sufficient inter-trial intervals. Interleave the trials with catch trial for every third trial. In this trial, the goal location is not baited. However, if the subject reaches the goal location, the experimenter should immediately place the food dish atop the goal location as a reward.

The training is performed in the square apparatus. The training involves 30 trials of 3 minutes each, wherein the subject learns to dig for food reward buried under small objects over a period of 2 weeks. Ten reward locations are randomly selected from 16 possible locations arranged as a square grid of side 100 cm.

Begin initial training placing a single object on the surface of the sawdust. Place a food reward under the object and randomize the location over the 1-week training period. After the first week, introduce 9 more objects into the arena. During this period ensure food reward is always placed under the same object. Randomise the positions of all the objects for every trial. In case the subject fails to find the reward after the time has elapsed, then raise the food reward vertically to the surface and allow the subject to consume the reward. Every third trial performed should be a probe trial with no hidden reward. If the subject successfully digs under the correct object, quickly place the food cup next to the object. In case the subject fails the task, place the food reward next to the correct object.

In case of surgery being involved, probe trials are conducted after the recovery period.

Following spatial training subjects undergo probe. Perform 30 trials with the same goal location as the spatial training, with every third trial being an un-baited catch trial.

Evaluation of the effect of hippocampal lesions on dry MWM performance

For the Dry Morris Water Maze task, the following data are recorded,

In the Dry Morris Water Maze task, the scent of the reward may serve as an olfactory cue. This effect can be minimized by mixing the sawdust with powdered reward. The Dry Morris Water Maze task can be time-consuming. Handling of the subjects and their own behavioral responses can impact the performances. Proper lighting is also crucial during the task. The interval between the recovery and the probe trial can also affect the performance. Overtraining the subjects can result in performance fatigue. Other factors influencing the performance may include the age, sex and other unintended cues (auditory, olfactory or visual).