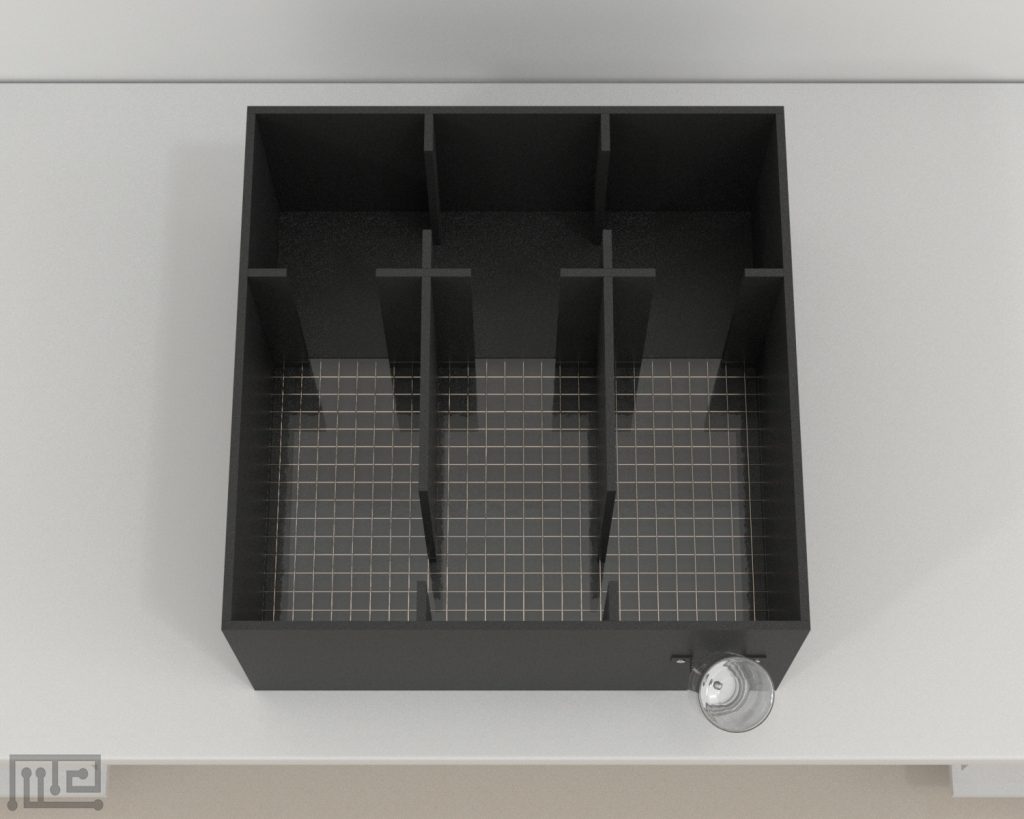 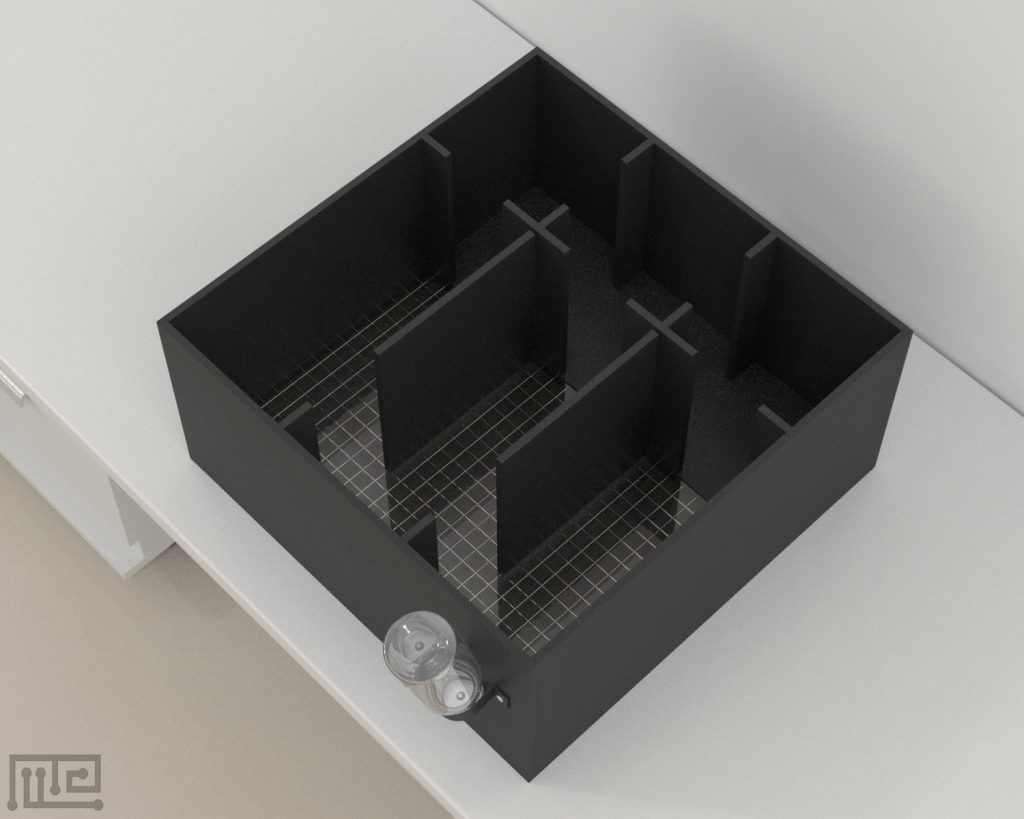 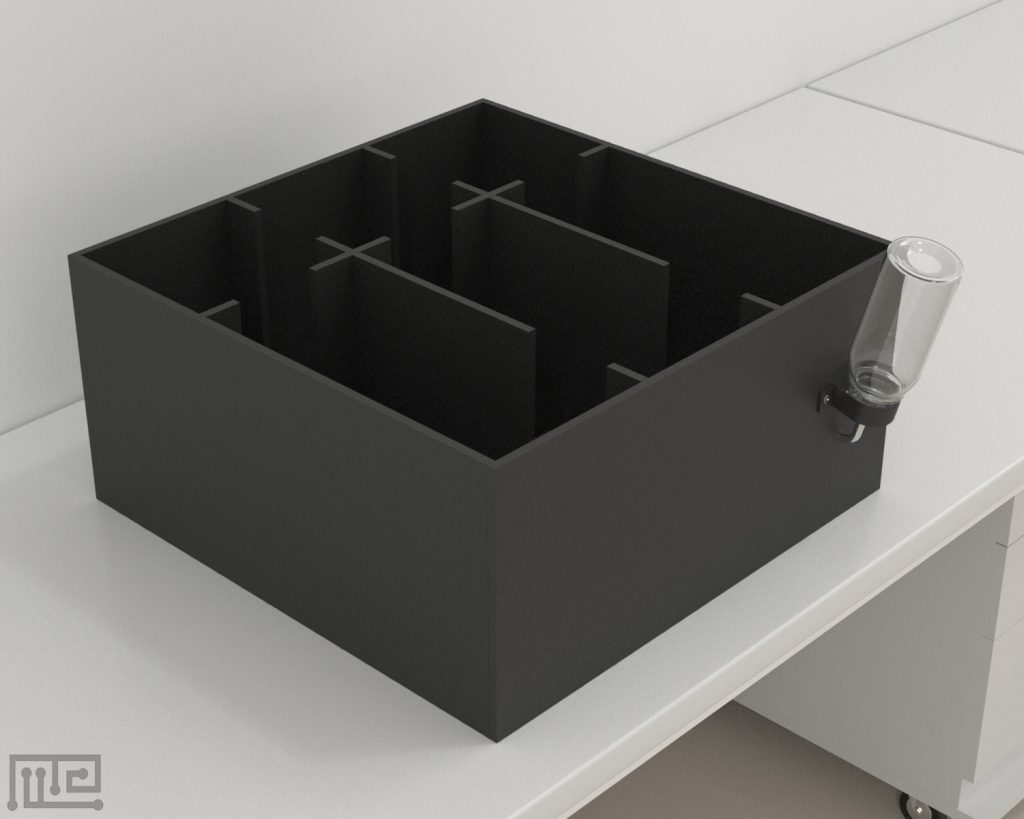 The EFSDT Box was used by Pitna Kim et al. in 2011 to study Impulsive Behavior in an Animal Model of Attention Deficit Hyperactivity Disorder (ADHD) of the Spontaneously Hypertensive Rats .

The box is made of black wood/acrylic, and divided into three compartments (start area, water area and a free area). With the exception of the start area, the floor of the EFSDT box was made of grid electrified wire. In the water area, a water bottle with a stainless steel nozzle was fitted from outside of the box so that the nozzle extended into the box above the floor.

Compared to other behavioral tasks of impulsivity such as the Five Choice Serial Reaction Time Task (5CSRTT), the Stop-signal Reaction Time task, and the Delay-Discounting paradigms, the ESFDT box provides a simple environment to measure the impulsivity in rodents (Winstanley, Eagle, & Robbins, 2006). It is a simple box-shaped apparatus partitioned into three different zones; (i) start zone, (ii) water zone, and (iii) free zone. The apparatus measures impulsivity through a well-known punishment/extinction paradigm (Kim et al., 2012). In the ESFDT task, water-deprived subjects are allowed to drink water from the electrified water zone of the apparatus. The subjects display impulsivity by increasing the frequency of drinking water, regardless of electroshock punishment. The ESFDT box can be used to examine impulsivity in rodent models of different psychological illnesses like ADHD, mania, and substance abuse.

Other apparatuses to evaluate impulsivity in rodents include the Visual Cliff Test,  the Five Choice Serial Reaction Time Task (5CSRTT), the Sociability Chamber, and the Sucrose Preference Test.

The ESFDT box (60 cm long×60 cm wide ×30 cm height) is made of black acrylic material. The box is parted into three different zones that are start zone, water zone, and free zone. The surface of both the water zone and the free zone is covered with grid electrified wire. A water bottle (6 cm high) with a stainless steel nozzle (4 cm depth) is attached in the water zone of the ESFDT box. The bottle is positioned outside the box while the nozzle extends 4 cm inside the box and 6 cm above the floor.

Clean the apparatus before each trail. Properly lit the apparatus. Before pretraining, water deprives the subjects for 18 hrs to motivate them to drink water. After pretraining, provide water to the subjects in their home cages for at least 4 hrs. Before task performance, water deprives the subject overnight. Before 30 minutes of the task performance, administer NaCl solution to the subjects to motivate them to drink water during the task. The Noldus Ethovision software can be used to assist with observations.

Place the subject in the start zone and allow it to explore the maze. Allow the subject to lick water from the bottle. After 5 s of water intake, present the subject with an electroshock punishment (2 mA, 0.5 s). Conduct the session for 10 min.

Kim et al. (2012) investigated impulsive behavior in ADHD of spontaneously hypertensive rats (SHR). The study comprised the hypertensive group with SHR and a control group with Wister Koyoto rat (WKY). The impulsive behavior was measured using the EFSDT Box. Before carrying out the task, the subjects were first tested for baseline factors during the training phase using different tasks. Locomotor activity was tested using the Open Field Test; the water intake was measured using the EFSDT box; the pain sensitivity was measured using the Automated Freeze Monitor System, and the anxiety-like behavior was tested using the Elevated Plus Maze. Cognitive ability was tested using the EFSDT box.  The testing phase followed the training phase. After the testing phase, both groups were treated with methylphenidate (2 and 5 mg/kg) and again tested in the EFSDT box. The results of the baseline factors measured during the training phase showed significantly high locomotor activity of the hypertensive group (n=10) compared to the control group (n=10) in the open field test. The increased latency to drink water was observed in the control group (n=10) compared to the hypertensive group (n=10,25.2+6.7 vs. 13.05+1.67). No difference in the water intake was observed between the two groups. Also, no difference in freezing time was observed between the two groups. No difference in anxiety levels, such as time spent in the closed or open arm, was observed between the two groups. There was also no difference in the number of times of entering the water area between two groups in the EFSDT box during the training days. The results of the EFSDT impulsivity task showed that the hypertensive group entered the water shock area more compared to the control group (t (18) =2.733, p<0.01). The hypertensive group also received more electroshocks t(18)=9.107, p<0.0010 compared with the control group. After treatment with methylphenidate, there was no effect on staying frequency in the water shock area in both groups. At the same time, a reduction in impulsive drinking was observed in both hypertensive (F (2, 17)=22.90, p<0.001) and control group(F (2, 17) =4.82, p<0.05). The results of this study concluded that the EFSDT box could be used as an effective assay to test impulsive behavior in ADHD rat models.

Yoon et al. (2013) investigated the role of dopamine on Oroxylin A mediated ADHD in SHR. The experiments were carried out on the SHR and WKY models of ADHD. The study comprised three groups of each rat model injected with Oroxylin A (1, 5, and 10 mg/kg), one group with methylphenidate (1 mg/kg), and a control group.  To test the effects of dopamine on oroxylin A-induced alleviations of SHR impulsivity, the subjects were injected with baicalein (5 mg/kg) or haloperidol (0.005 mg/kg) 20 minutes before injecting Oroxylin A. After 30 minutes of drug administration, the subjects were tested for inattentive behavior in the Y maze, whereas the subjects were tested for impulsivity in the EFSDT box. The results of the Y maze test show increased spontaneous alteration in both Oroxylin A treated SHR groups (5 and 10 mg/kg, p<0.05) and methylphenidate treated group (p<0.05). Arm entries were not affected in both Oroxylin A treated methylphenidate treated and control groups of SHR and WKY. The results of the EFSDT task revealed a significant decrease in impulsivity in Oroxylin A treated and methylphenidate treated SHR groups (1 and 5 mg/kg) but not in WKY groups. The results of the study revealed that GABA-A agonist baicalein enhanced the efficacy of Oroxylin A by alleviating impulsiveness in SHR. In contrast, the dopamine receptor antagonist haloperidol (0.005 mg/kg) repressed the effects of Oroxylin A. The study concluded that Oroxylin A is responsible for improving ADHD-like behaviors in SHR through modulation of the dopamine pathway and can be used as an alternative drug for the treatment of ADHD.

The ESFDT task is easy to perform with minimum handling of the subjects. The black color of the apparatus prevents surrounding visual cues, which may otherwise alter the observations. No extensive pretraining of the subjects is required. The ESFDT box has simple apparatus compared to other apparatuses to test impulsivity.

The water deprivation may cause stress to the subjects. External factors like surrounding olfactory or auditory cues may cause variations in the observations.