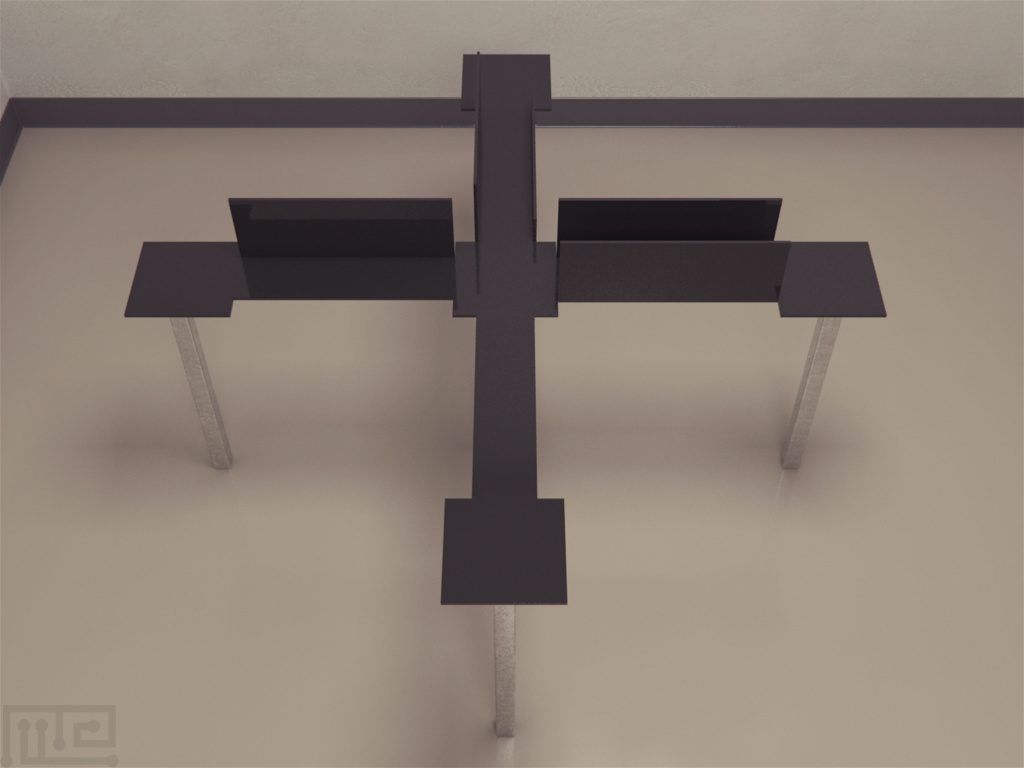 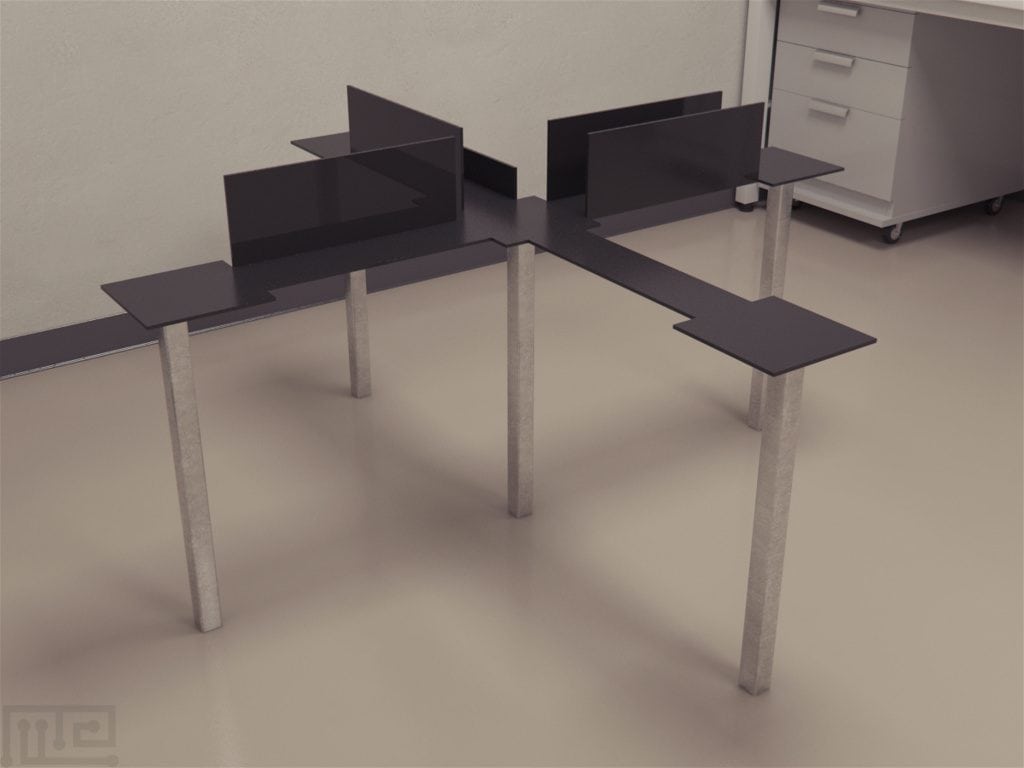 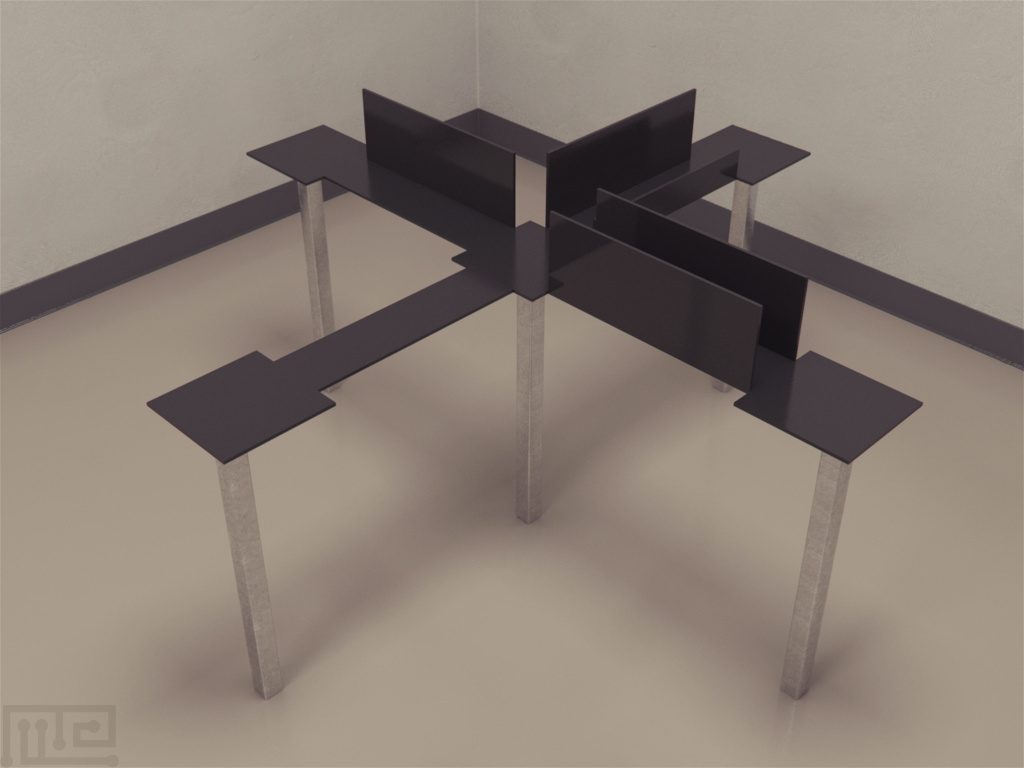 The Elevated Asymmetric Plus maze is an apparatus first described by Ruarte et al (1997) as a method to encourage explorative behavior in the rat.

The apparatus consists of an elevated asymmetric plus-maze composed of 4 different arms of the following specifications:
Arm 1: no walls

Request an Elevated Asymmetric Plus Maze

Per Month
Request an Elevated Asymmetric Plus Maze
Menu

The Elevated Asymmetric Plus Maze is used in the assessment of the mechanisms of exploratory motivation and fear in rodents. The maze was first described by Ruarte et al., 1997, in their paper investigating the role of histamine in the hippocampus in exploratory motivation mechanism and emotionality. The maze features different asymmetries on each arm by using a combination of walls and no-walls. The design was intended to create conflictive exploration among the subjects. The basis of the approach was that novel environments with fear-inducing characteristics induce specific behaviors and modulate exploration by fear.

The Elevated Asymmetric Plus Maze is a modification of the traditional Elevated Plus Maze with four different asymmetries on each arm: no-wall arm, high walls arm, high-low walls arm and no-wall arm. The difference in geometrical characteristics of each arm creates a conflict with the natural explorative tendencies of the rodents. The Asymmetric Plus Maze is ideal for studying drug effects on the explorative behaviors and for quantifying anxiety.

The elevated Asymmetric Plus Maze is a ‘+’ shaped maze with each arm being geometrically different from one another.  Each arm is 42 cm in length and 11 cm wide with a platform (20 x 20 cm) at their ends. The asymmetries of the arms are as follows.

The entire maze is maintained at an elevation of 60 cm from the floor. The maze is usually black in color.

The Asymmetric Plus Maze is cleaned before and after every trial to avoid unnecessary stimuli from influencing the performance of the subjects. The entire apparatus is well-lit. For tracking and recording, software such as the Noldus Ethovision XT can be used.

Since the aim of the investigation is to assess novelty-based exploration, each subject is only tested once in the maze. In case of drug testing that requires implants, the implantation is done at least 72 hours before the experiment to allow enough recovery time.

The general procedure of the task involves placing the subject on the central platform and observing its exploratory behavior for 5 minutes.

Subjects are divided into two groups. One of the group is operated upon and surgically implanted with a cannula and injected with 1 µl of saline. The performance of the operated group is compared with that of the unoperated group to observe behavioral differences on the Asymmetric Plus Maze. (Ruarte et al., 1997)

The subjects are first injected with saline followed by the Histamine Dihydrochloride (HA) microinjections, 10 and 5 minutes before the experiment respectively. (Ruarte et al., 1997)

Evaluation of effects of Diazepam on behavioral activity

Subjects are treated with 1 mg/kg body weight of DZP and tested on the Asymmetric Plus Maze. The performance is compared against that of the controls. The subjects are allowed to explore the maze without restrictions for 5 minutes freely. During this period, the arm that the subject remains stationary in for at least 2 minutes (prolonged permanency) is recorded. (Ruarte et al., 1999)

The following data can be recorded for the Asymmetric Plus Maze

The following sample graph compares the Exploration Score between rats with (SAL-treated rats) and without implants (Intact rats).

The Asymmetric Plus Maze models conflictive exploration through the asymmetrical designs of each arm. Unlike other behavioral mazes, the Asymmetric Plus Maze does not require pre-training or food deprivation. The maze is ideal for evaluating and quantifying anxiety. The task is relatively less time-consuming and easy to perform.

Handling procedures of the subjects may influence the performance. Presence of any auditory, olfactory and visual cues may also impact performance. The subject’s own emotional and mental state can affect performance.

Request an Elevated Asymmetric Plus Maze