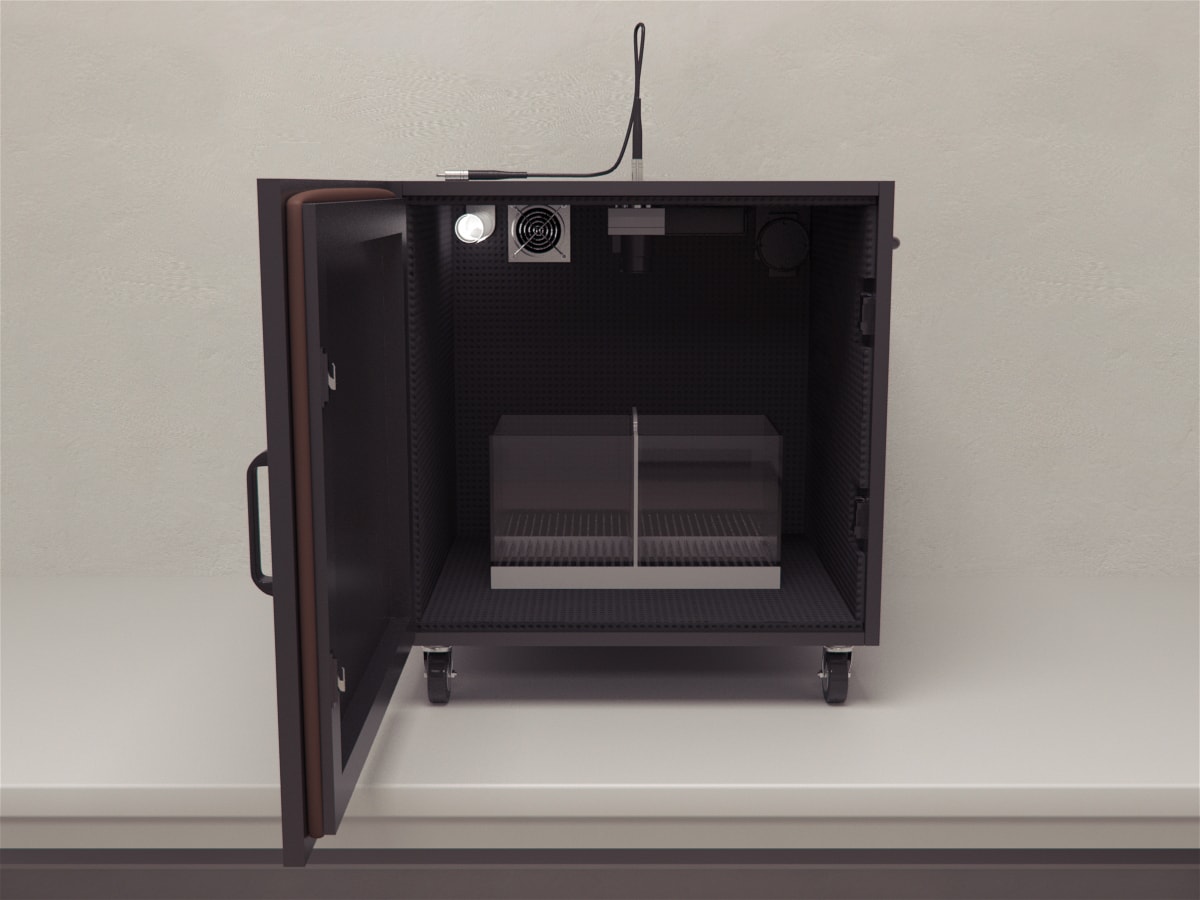 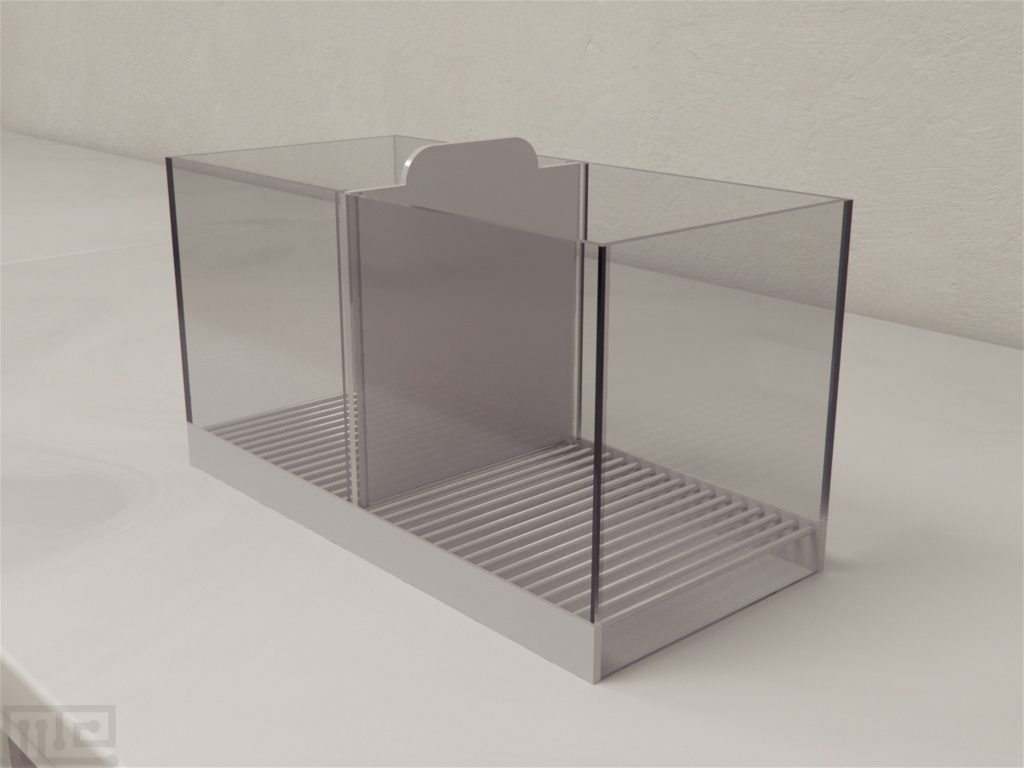 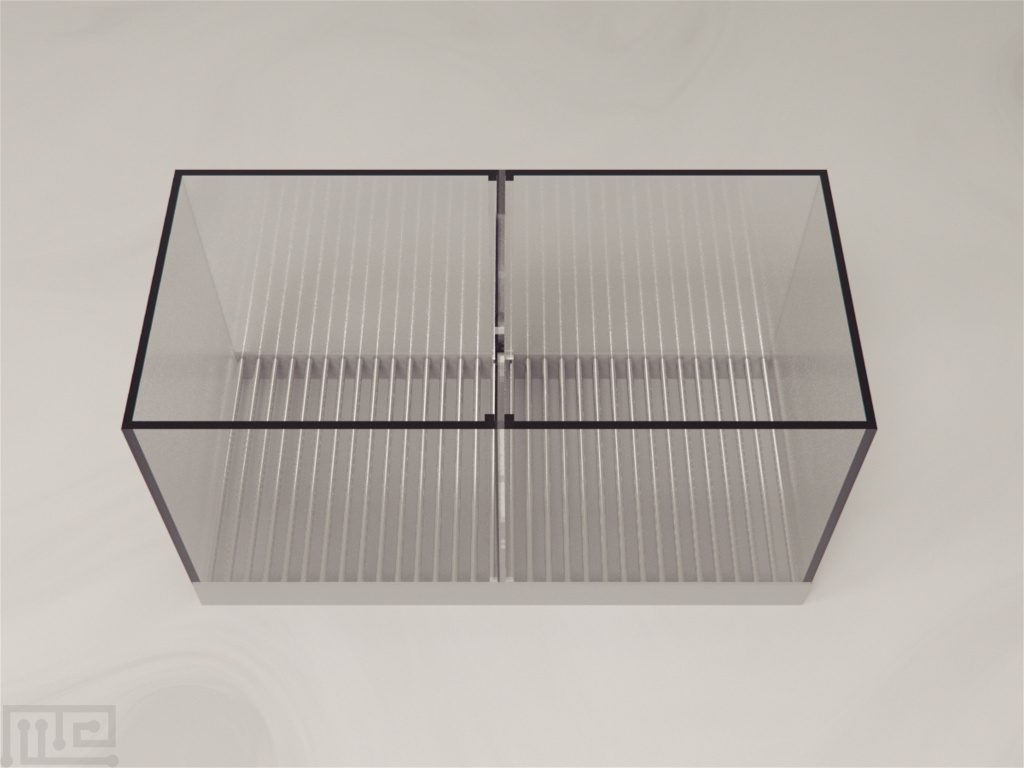 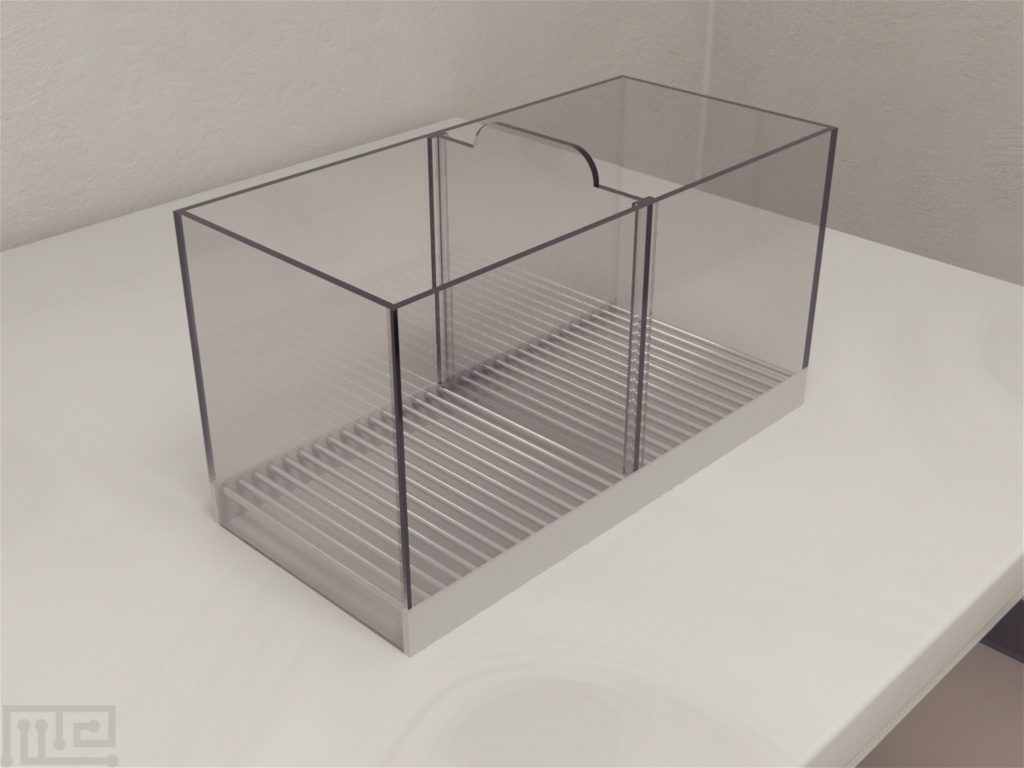 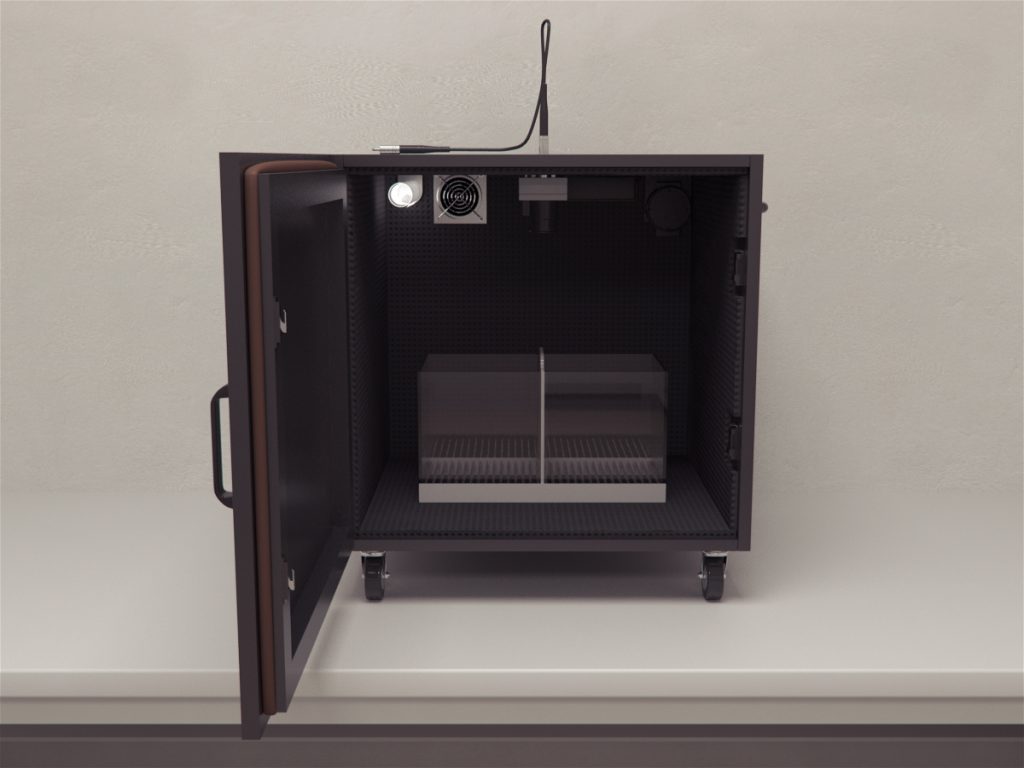 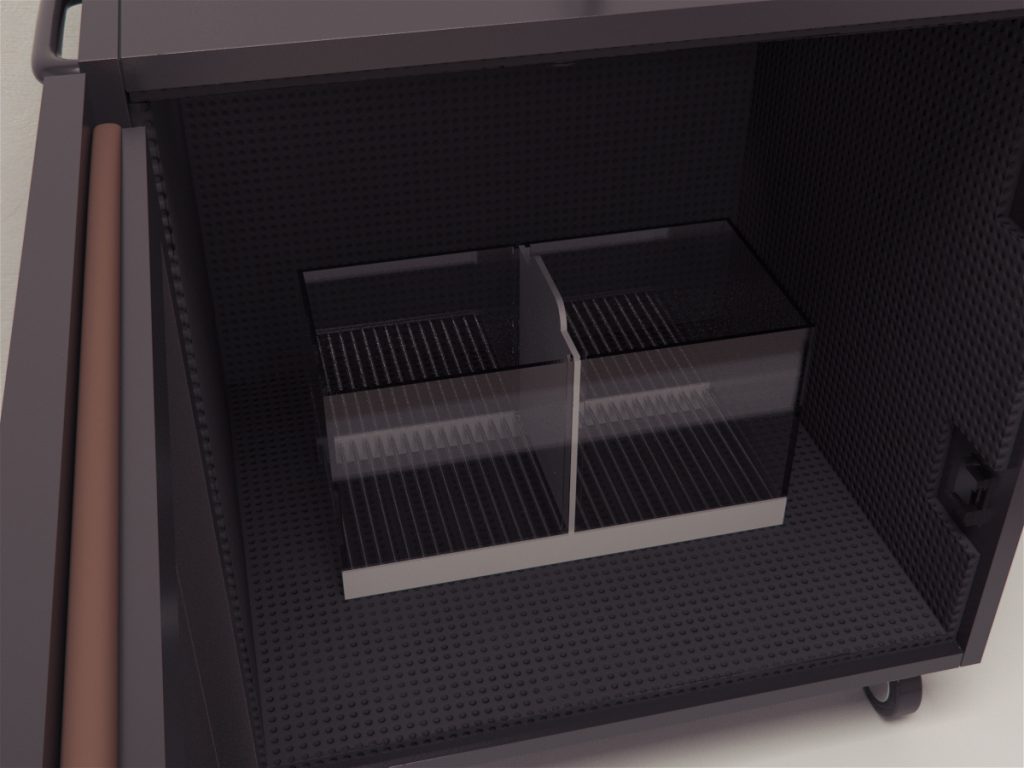 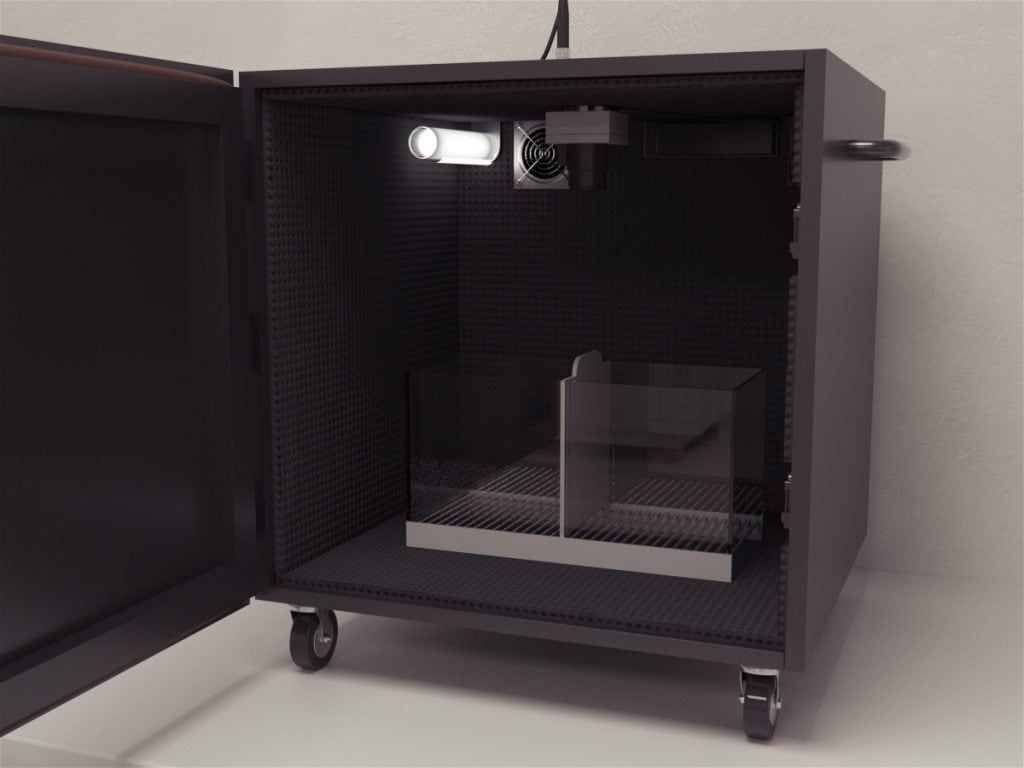 The empathy assay was first described in the literature by Jeon et al (2011) and is an excellent tool to interrogate observational fear. The MazeEngineers apparatus comes with two key components: A double chambered acrylic chamber with two foot shock controlled grids, each of which can be controlled independently with our free Conductor Software. This apparatus is then placed inside of a standard, basic isolation chamber. Upgrades in this chamber to include sound and light cues can be done. Please inquire for more information

Per Month
Request an Empathy Assay

The observational fear-conditioning assay is used to assess empathy in the subject by evaluating social observational fear learning. Empathy, in humans, is defined as the ability to recognize and share emotions with others. In many mental disorders such as Psychopathy and Antisocial Personality Disorder (ASPD), the individual’s empathetic abilities are impaired. Impairments in empathetic abilities of an individual can have a significant effect on their social-emotional health. Despite empathetic abilities being crucial to the quality of life of an individual, rodent models of emotional empathy impairments are rare, largely due to lack of robust behavioral assay systems.

Emotional empathy can be studied in rodents as a precursor to fear response arising from observing a conspecific experiencing an aversive stimulus. A simple protocol to observe social fear in rodents, suggested by Jeon et al., 2011, includes a two-chambered Fear Conditioning Chamber.  One of the chambers holds the observer subject, and the other holds a demonstrator conspecific that receives foot shocks. The chambers are separated by a clear wall to allow the subject to view the conspecific. The observer subject is observed for its response to the same set-up after 24 hours. Other assays that use subject sociability are the Sociability Chamber, the Social Defeat Apparatus and the Social Reward Chamber.

The apparatus for Empathy assay includes a sound-attenuating cubicle with fan within which an observational fear-conditioning chamber is placed. The fear-conditioning chamber is composed of two chambers that are separated by a transparent Plexiglas divider. The chambers are 18 x 17.5 x 38 cm each with 5 mm diameter stainless steel rods (0.7 cm apart) placed parallel on the floor.

A programmable, computer controlled shocking system is also used to administer foot shock to the demonstrator conspecific. Two plates are included and both plates can be controlled separately.

Before beginning the experiments, the equipment is cleaned to with 70% ethanol solution. Video recording and tracking software, such as Noldus Ethovision XT, are set-up, ensuring continual recording during the sessions.

The assay lasts for two days and is composed of two trials: Training trial and Memory test.

Place the subjects in their respective chambers facing the clear partition. The 5-minute habituation period is initiated, during which the demonstrator subject does not receive any foot shocks. Immediately after the habituation period begin the training trial. The demonstrator receives the foot shocks as programmed. The training trial lasts for 4-minutes, during which the observer subject will develop freezing behaviors as a response to the demonstrator subject showing typical behavioral responses (running, vocalization, and jumping) to the shocking.

At the end of the 9-minute training trial, house the observer-demonstrator pair individually for 24 hours. On the expiration of the 24 hours, place the observer subject back in the same chamber of the apparatus. As a memory response to previous day fear-conditioning, the observer subject will display freezing behaviors. Observe the subject for 4 minutes.

Evaluation of Observational Fear Learning and the Empathetic Response

The following data are observed during the Empathy Assay.

Freezing behavior is characterized by the lack of movement, except for respiratory movements for 2 seconds or longer. Familiar pairs tend to show heightened freezing responses.

The Empathy assay brings us one step closer to understanding how human empathy works. The test analyzes empathy as a precursor to observational fear conditioning. It can be observed that subjects that are familiar with the demonstrator conspecific show heightened response to their sufferings. It can also be seen that co-housing period for the pairs has a graded effect on the development of observational fear, with longer periods resulting in stronger responses. The test also allows analyzing the effect of novel environment (such as placing the observer in the other compartment or using an opaque divider wall) in the 24-hour contextual memory test. It can be seen that changing the environment for the memory test shows a reduced memory-based fear response to the previous day fear-conditioning. The test can be easily adapted to study different scenarios of empathy-based behaviors, such as observing the performance of observers who have experienced aversive stimulus before the Empathy assay (Atsak et al., 2011).

For the trials, it is important not to use juveniles or young adults as there are likely to show reduced responses. Further, pairings (exception of mating pairs) should be of same-sex conspecifics with similar size and weight. It is important to house the observer and the demonstrator separately after the habituation and training period to prevent the social transfer of fear. It must be understood that this model cannot take into account the large range of human emotions; thus care must be taken while interpreting the data for translational research. Other factors that can influence the performance of the subjects may include the co-housing periods for sibling and mating pairs, handling procedures and presences of any undesired cues (olfactory, auditory or visual).