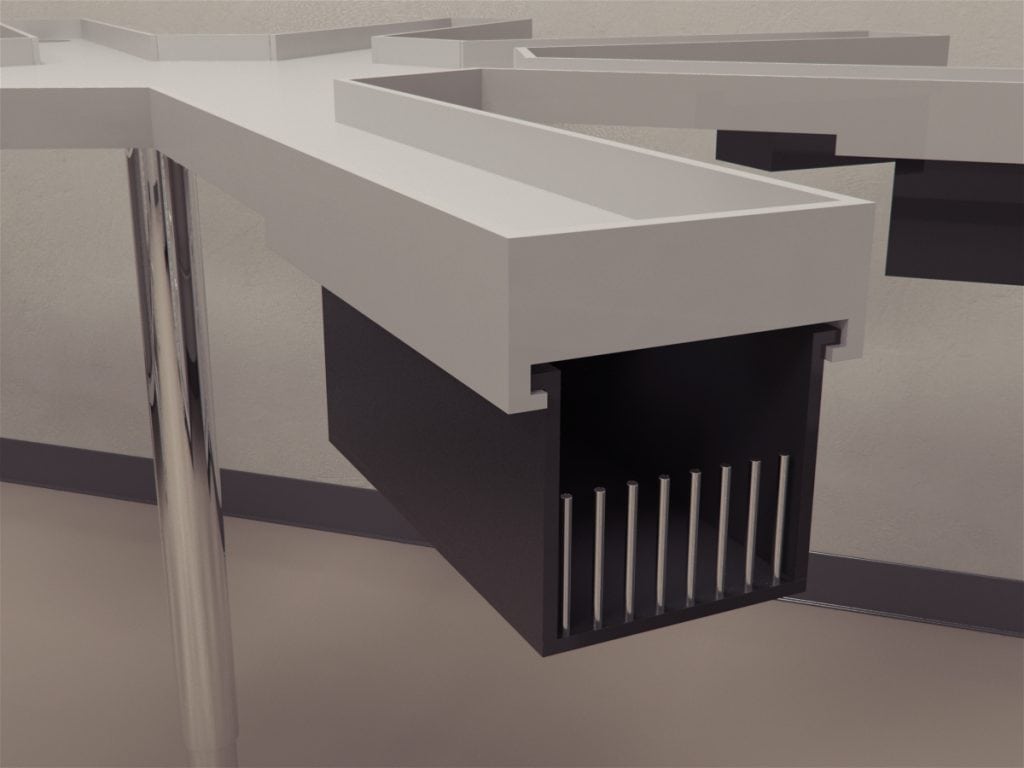 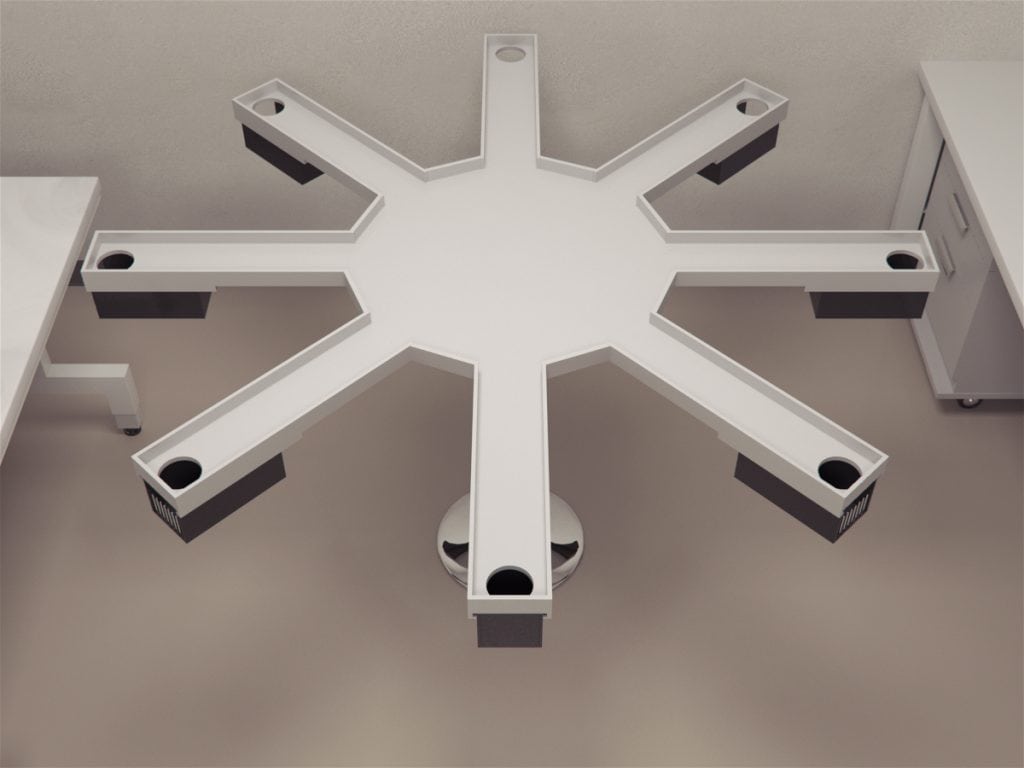 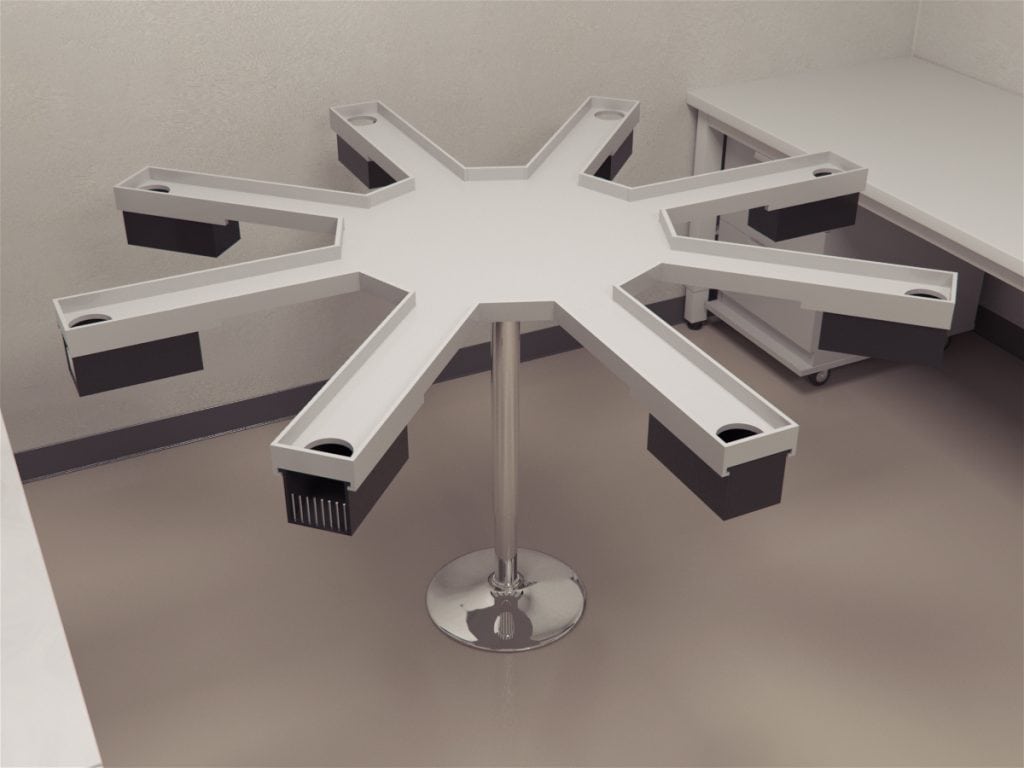 This modification of the radial arm maze combines the best elements of the Radial arm maze with the fear aversion motivation of the Barnes maze. Originally described by Paganelli et al (2004) in a murine model of cerebral ischemia, the device is a sensitive and well-designed apparatus for evaluation of learning and memory.

All 8 arms have holes in which rodents can seek escape, but of the 8 arms, only one contains true refuge; the remaining arms have goal boxes that are open-ended. Rails (2.5 cm high) borders each arm to prevent the animal from falling. The rotatable maze was elevated 90 cm above the floor on a
metal stand, similar to the Barnes maze to shift extramaze cues.

Behavioral tests assist in investigations of spatial learning and memory in different disease and intervention models and allow development of drugs and treatments that have a better success rate. The traditional paradigms such as the Radial Arm Maze and Barnes Maze can be further attenuated to provide a sensitive and a more practical behavioral test in murine models. Paganelli et al., 2004 evolved the Radial Arm Maze into a novel test apparatus by adding escape holes at the ends of each arm.

Paganelli’s et al., 2004 adaptation of the Radial Arm Maze was used in ischemic brain damage model to investigate its influence on acquisition and retention of cognition in mice. The novel apparatus combines the elements of the Radial Arm Maze (the radiating arms) and the Barnes maze (the addition of escape holes to the arm ends) and uses the natural preference of rodents for darkened, enclosed shelters and the averseness of open, illuminated areas.

The apparatus consists of a central open platform with arms radiating outwards. Each end of the arm is installed with an escape hole that provides the subject with a safe, darkened space. The averseness of the open space and the illumination serve as the stimulus for this test. Unlike other behavioral tests, the Escape Hole Radial Arm Maze (EH-RAM) does not require food deprivation or immersion of the animal in the water.

A central polygonal platform of dimension 71 cm diameter with 16 sides makes up the start area. The platform also holds an open-ended, dark cylinder at the center of the maze that serves as the start box which is operable via a pulley system. Eight arms, 55 cm long and 15 cm in width, radiate in an equally spaced formation out of the polygonal platform. The arms are lined by rails of 2.5 cm height to prevent the subject from falling off the arms. At the end of each of the arm, a 9 cm diameter opening leads to the 23 x 11 cm darkened wooden box of depth 9.5 cm. The safe-space boxes can be easily glided out or inserted back like a drawer under the openings. Of the eight radiating arms, only one escape box served as the true refuge. The maze is rotatable and can be elevated up to 90 cm above the floor.

The experiment uses extra-maze cues such as posters on the walls, closed door, tridimensional objects, and a small ventilator on the floor to produce constant noise in the testing area throughout the experiment. The apparatus can be illuminated using a pair of 200W spotlights, and a pair of 40 W incandescent lights fixed on the ceiling at 180 cm from the maze. The test sessions can easily be recorded and monitored using a video and tracking software such as the Noldus Ethovision XT mounted on the ceiling.

For the ease of data analysis, the arms are numbered with respect to their location to the extra-maze cues. The apparatus is cleaned before and after every trial to avoid the influence of any lingering stimuli.

Habituation begins by placing the subject directly in the center of the maze and allowing it to explore the maze till it finds the goal arm having the true refuge or until 4 minutes have passed. If the subject fails to locate the goal box within the allocated 4 minutes, it is gently nudged towards the arm containing it. The subject is allowed 4 minutes within the goal box before returning it to its home cage. The habituation process is conducted in the absence of extra-maze cues, with the spatial location of the goal box randomly changed between subjects. The phase lasts for at least 3 days.

The selection and pre-training of the subject are based on the experiment that is to be carried out. Generally, the subject is placed in the start cylinder through the open top and released after 30 seconds using a pulley to lift the box. The subjects receive three trials per session, one session per day.

Between trials, the maze is randomly rotated on its central axis and the goal box randomly changed to another arm while maintaining its spatial position with respect to the extra-maze cues.

Evaluation of performance in post-operative training

Transient forebrain ischemia is surgically induced before training, and the subjects are habituated to the EH-RAM, 17 days after ischemia. The acquisition training is conducted between the 20th and 26th post-ischemia days (Paganelli et al., 2004). The sessions are carried out as described earlier.

Habituation and acquisition are carried out as mentioned earlier, and intact animals are trained from day 1 to 8. Following the eighth day, the subjects are induced with ischemia or a sham operation and allowed to recover from surgery. On the 24th day, post-surgery, the subjects are tested for retention of the previously acquired cognition (Paganelli et al., 2004).

Graphs, such as the one below, allow easy visualization of the data and gather a deeper understanding of spatial learning and memory behaviors of the subjects.

The EH-RAM was developed by Paganelli et al., 2004 as a novel, sensitive and a more practical behavioral test in murine models for assessing spatial memory and cognition affected by cerebral ischemia. Unlike with other behavioral tests, such as the Morris Water Maze that requires immersion of the subject, the EH-RAM does not require water immersion or food-deprivation. The task also does not require long-lasting training sessions as seen with other tests thus serving as a simpler behavioral model for the investigation of drug effects on cognitive disturbances caused by cerebral ischemia.

Overtraining and handling procedures may affect reinforcing properties during the task. The subjects own behavioral flexibility can also influence the results. The open and elevated nature of the maze may cause anxiety, as seen in other elevated mazes such as the Elevated Plus Maze, that could potentially disrupt memory performance between lesioned and non-lesioned subjects. The subjects may also use sequential entrance strategy contributing to the behavioral performance.